Last Updated on 26th March 2019 by Sarah and Justin

And here we are at the end. 13 months after we set off from our apartment in Brooklyn, we would complete our trip around (some of) the world journey in Mainz, Germany. It may seem an odd place to end. After all, Mainz isn’t the most popular destination in Germany. But we came up with the idea when we left Cologne in the middle of our trip. Some slow planning had put us on the slow train to Frankfurt Airport. On that train ride we were wowed by the views of the towns along the Rhine River. So we made a plan to return and seven months later we were taking the train from Nuremberg back. We wistfully enjoyed our time visiting this small city and the Rhine River Valley. There are plenty of things to do in Mainz, as well as some really great Mainz restaurants, and we’re here to tell you what they are. We’re also sharing our experience taking a Rhine River cruise. So read on!

Mainz is often overlooked as a tourist destination. And we think that’s too bad given everything the city has to offer. It has a prime location super close to a major international airport (Frankfurt) and is right on the banks of the Rhine River. So Mainz is absolutely a great base from which to explore the beautiful Rhine River Valley. In fact, it’s also a great place to start or end a Rhine River cruise.

Its major sights are diverse and offer something for all different types of travelers including: historic Roman ruins, stained glass church windows created by the artist Marc Chagall, and a museum dedicated to the inventor Johannes Gutenberg. And it has some of the best wine in the country! But of course, maybe we enjoyed our time in Mainz so much precisely because it isn’t so popular. After being surrounded by other tourists in Nuremberg, we were happy to end our trip in a much more relaxed, real seeming city like Mainz.

Things to do in Mainz

Walk through the Mainz Altstadt

We’re going to be straight with you: we didn’t actually do or see most of the above-listed activities in Mainz. Being that this was the last stop on our 13-month adventure, our time there was bittersweet. We weren’t in the mood to go see any big sights or museums. We did however walk through almost every inch of the Mainz Altstadt (the loveliest place in the city), admiring the architecture and scenery and overall German-ness of the place. Here are some of the highlights. 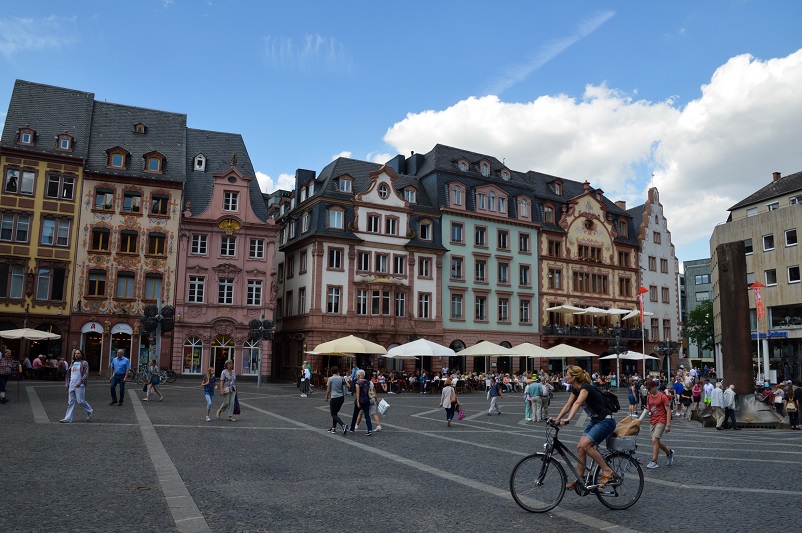 The Markt in Mainz is the big square in the middle of the city. On one side, there are buildings painted in different pastel colors with intricate details.

In the middle of the square stands a gorgeous Renaissance era fountain, Marktbrunnen. It’s elaborately sculpted and decorated. 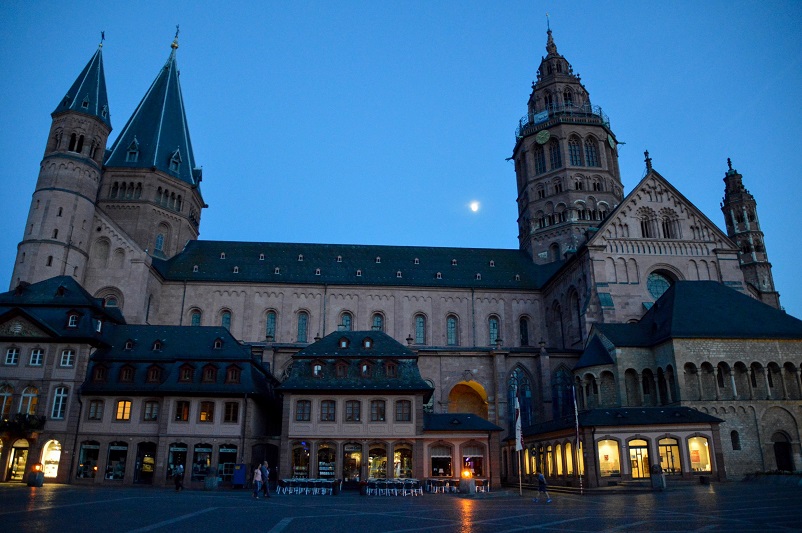 The imposing Mainz Cathedral is on the other side of the Markt. It has been restored and updated over the years (having been damaged in fires and wars), but its foundations were laid over 1000 years ago! 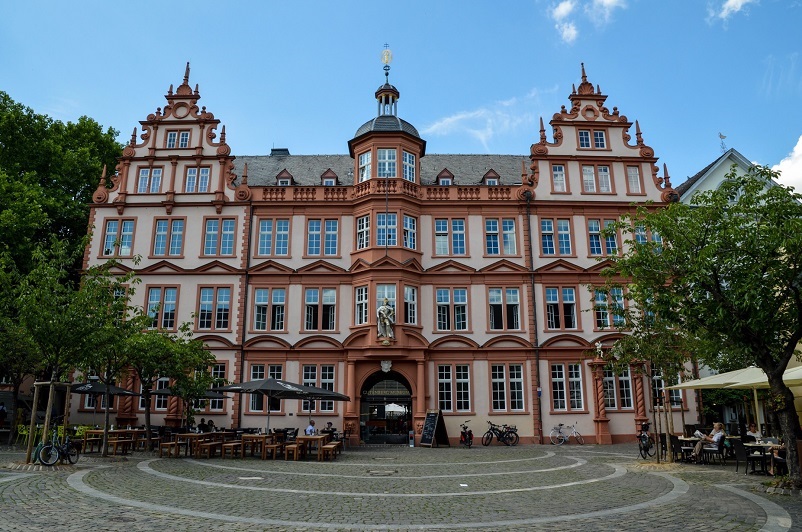 Nearby, the Gutenberg Museum – where you can learn all about the invention of printing – is housed in another beautiful building, Zum Römischer Kaiser. And right outside is a lovely garden with sculptures of printing letters.

The most picturesque section of the Mainz Altstadt is the Kirschgarten, a small area where the streets are lined with half-timbered houses. We actually only stumbled into this area on our last day in Mainz and wish we had found it sooner. It’s so picturesque.

Explore Mainz beyond the Altstadt 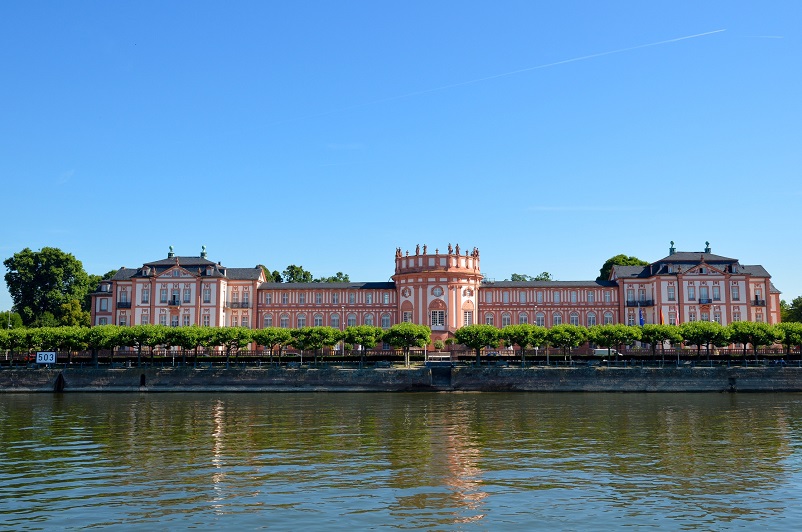 There are a lot of lovely places outside the main Altstadt that are worth exploring. We would definitely recommend a walk along the Rhine. Though the Electoral Palace, which sits right on the water, is best viewed from a Rhine River cruise (more on that below!).

Another striking pink building (and now we’re wondering why so many buildings in Mainz are pink!) is St. Peter’s Church. Its black domes stand out especially on a fine sunny day. And Christuskirche is at the top of a small park that’s nice for a stroll. 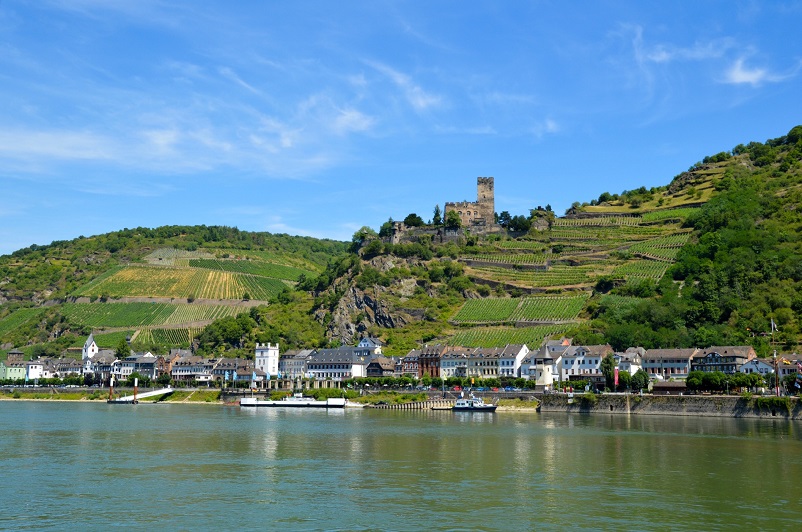 We did do one major activity in Mainz: a Rhine River day cruise. It was a wonderful way to spend a sunny summer day, and turned out to be one of the highlights of our whole 13-month adventure.

We took a ferry with KD from Mainz to Sankt Goar and then took the train back. You can do a round-trip, but given the timing of the return, we would have felt really rushed in Sankt Goar. The train is more frequent and also significantly cheaper.

Note, KD offers assistance for passengers with limited mobility. You can read about their accessibility services here. 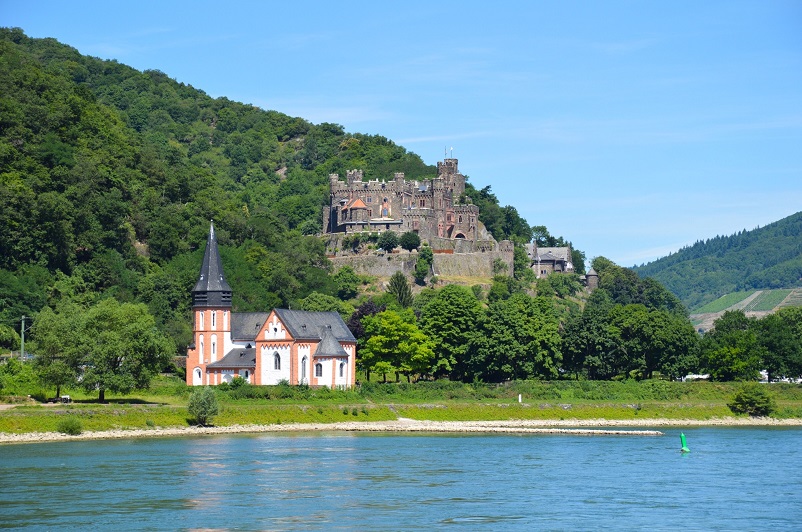 Castles are the highlight of the cruise. They just pop up on either side of the river throughout pretty much the whole ride. The most chock-full-of-castles part of the trip is from Bingen to Sankt Goar. We hurriedly scurried from one side of the boat to the other snapping hundreds of pictures. 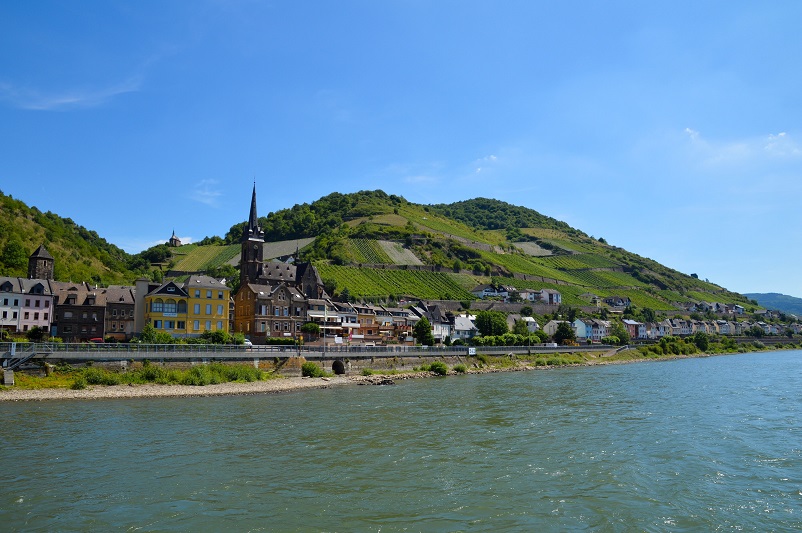 If desired, the ferry will take you all the way from Mainz to Koblenz. And there are a lot of places to get on or off along the way. We chose Sankt Goar based on where it was and how adorable it looked (and it was a good choice!). We had a nice time walking around the town. It’s got its own castle (of course) and is also known for cuckoo clocks and German beer steins (we did quite a bit of window shopping). 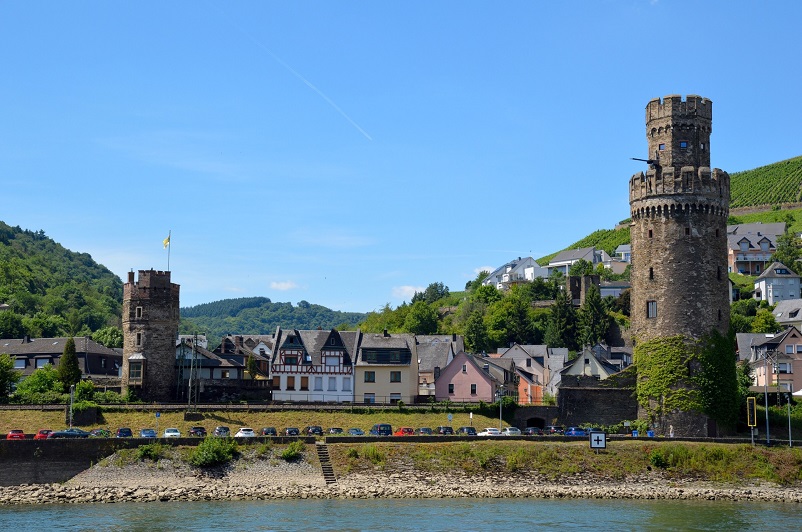 There are two special cheeses to eat in Mainz. Handkäs mit Musik and Spundekäs. The latter is a soft cheese spread served with pretzels. We preferred the former, a hard cheese marinated in and served with vinegar, onions, and herbs. That’s the “Musik” and you should Google why it’s so named. It actually reminded us of the Olomoucké tvarůžky we had in the Czech Republic.

We ate this tasty specialty at two small local spots where we had two delicious dinners in Mainz.

The first was at Am Holztor, which is named after the old city gate that stands down the street. It’s a little bit outside the touristic center of Mainz, but easily walkable. Along with Handkäs mit Musik, they’ve got great Schnitzel and wine (Mainz is the largest wine-growing district in Germany). We sat outside on the small terrace at a communal table, alongside a couple massive, but super friendly and cute dogs.

Our second dinner was at Weinstube Hottum. This cozy spot is right in the Alstadt, down a super picturesque cobblestone street. We again sat at a communal table, this time with a couple from the Netherlands (amazingly, Rotterdam!). And again, we enjoyed a starter of Handkäs mit Musik.

Our last night (our last, sad night), we checked out the local micro-brewery, Eisgrub Bräu. The beer (both light and dark varieties) was great. For food, well, we’d recommend you stick to our other two recommendations. Still, it was a good way to end (although you couldn’t tell it from Sarah’s face).

How to get from Mainz to Frankfurt Airport

Regional trains run frequently between Mainz and Frankfurt Airport. On average, the journey takes about 25 minutes. You can take an ICE train that’s about 17 minutes but for the additional cost, it doesn’t seem worth it to us. You can buy a regional ticket from a machine before boarding the train. And you can check timetables at DB Bahn.

So that was it. We can’t believe we’re (finally!) done writing about all the places we visited on this big journey.

<< Interested in how we planned our year-long adventure?
Read next: planning a world trip itinerary >>