Last Updated on 23rd January 2020 by Sarah and Justin

Are you looking to travel in Southeast Asia and explore the beautiful, relaxing, and delicious countries of Thailand and Malaysia? And do you want to travel overland? But maybe you’re starting out on a Thai island like Koh Lanta and aren’t sure how to get from one country to another. Don’t worry – we’ve got you covered! This post details our travels from Thailand to Malaysia on minivans, minibuses, ferries, and trains.

We’ve included information about transportation in Southeast Asia including taking the train from Thailand to Malaysia, how to book tickets, how long each leg took, where to find bathrooms, and our overall experience (which was good!). And if you’re doing the trip or specific legs in reverse from Malaysia to Thailand, this post will be helpful for you too.

Specific considerations for our trip from Thailand to Malaysia

When we first started planning our time in Southeast Asia, we read that it would be relatively easy to take the train all the way from Thailand to Malaysia. We built much of our itinerary around the (seemingly) romantic idea of taking the train from a Thai Island to George Town and then continuing onto Kuala Lumpur. So it came as a rude surprise when we realized two things:

We realized all of this pretty much on our way to Koh Lanta. Lucky for us, we had a whole week to relax there and figure out the best way for us to travel through these countries.

<< Read all our tips for planning a world trip itinerary >>

How to get from Koh Lanta, Thailand to George Town, Malaysia (via Hat Yai)

Koh Lanta is located in Krabi Province on the Andaman coast, but it’s a few hours away from the better connected town of Krabi. We originally thought it might make sense to backtrack to Krabi. Then we thought we might be able to take a boat some of the way. But after some research, we learned the best way (for us) to get from Koh Lanta to Penang, Malaysia would be a five step process:

Based on our fear of delays and lack of fortitude, we decided to not do the whole journey in one day (although it can in fact be done). We split it over two, and here’s all the logistical details of how we did it.

We are typically the types of travelers who like to pre-book transportation (to save money and give us peace of mind). So we tried to book a ticket to get ourselves off Koh Lanta before we even got to the island, but it was impossible. Our Koh Lanta B&B owner assured us there are many travel agents on the island and we wouldn’t have a problem finding a ticket for the day we wanted to leave and he was right. We shopped around and ended up paying 570 THB (~$16.40 at the time) each. Most of the shops advertise multiple departures per day. We asked to take the 10am departure, but when the shop owner called the minivan people, they told us to be ready for pick-up at our hotel by 8:30am. We paid the shop owner (in cash) and hoped for the best.

The trip from Koh Lanta to Trang 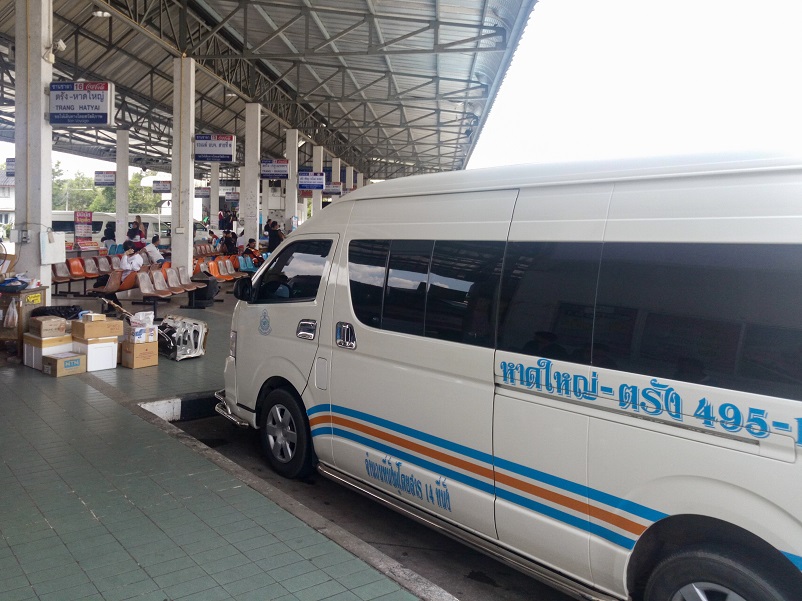 The minivan showed! We had read horror stories about how tight they were and boy were those stories right. We got lucky by being early in the pick-up route so we got seats together and our luggage was stowed in the back of the van. We had our smaller bags on our laps and it was really hot. But at least we were sitting together.

The minivan takes a few hours to get from Koh Lanta to Trang, including the Koh Lanta ferry. At one point during the trip, the minivan pulled over to the side of the road and let three passengers out. Their connection was a pick-up truck. One of them hopped into the open back. We were glad we weren’t going wherever they were.

The trip from Trang to Hat Yai

When we arrived in Trang, Sarah immediately used the much-needed bathroom. Then, our minivan driver explained that he would buy us our tickets to Hat Yai. So he did, and then he left. No one spoke English at the bus station, so we communicated through pointing and shrugging and smiling… lots of smiling!

We missed the first minivan because there wasn’t room for our luggage. But it was cool. We jumped into the next minivan where we again were lucky to get seats together. We thought we were going to be let out at the Hat Yai bus station, where we would then have to take a tuk-tuk to our hotel. But fortuitously, someone signaled to the driver to be let out sooner, and we saw that it was close to our hotel, so we got out there. Thank you local Thai sim card and Google Maps!

One night in Hat Yai, Thailand 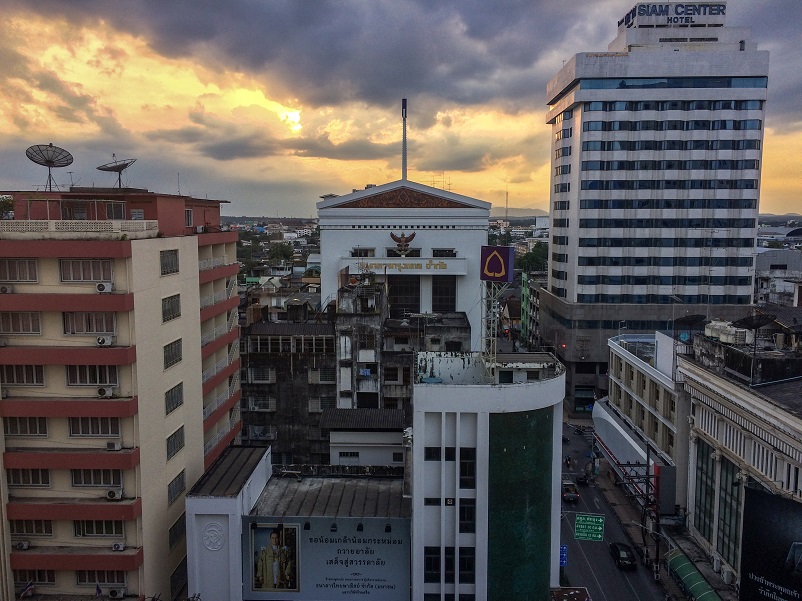 We knew we had no chance of making the train from Hat Yai to Malaysia that same day, and we didn’t want to spend more time on a bus or in a minivan. So we decided to spend the night in Hat Yai. We splurged and spent $52 on a hotel with a pool and a gym and a pretty good view.

Hat Yai doesn’t get the best rap. You may read about some safety issues, but we didn’t encounter any. It caters mostly to Chinese tourists who come for the less expensive shopping. We honestly quite enjoyed it. We had dinner at a popular (inexpensive) buffet on the top floor of a mall with views of the city. And the next day we went to the train station to head to Malaysia.

Not long ago, one could take the same train all the way from Bangkok, Thailand to Butterworth, Malaysia. But now a transfer is required. The trip now consists of first taking a train from Hat Yai to Padang Besar, which is on the Thai-Malaysian border, and then transferring to a separate train that goes onto Butterworth. We bought our train ticket at the Hat Yai train station the day we departed (we unsuccessfully tried to buy it the day before).

There were two trains per day – we took the one around 1pm vs. the one around 7am. The train miraculously had air conditioning and plenty of space to store luggage. Two tickets cost a total of 140 THB (~$4 at the time).

Train from Padang Besar to Butterworth 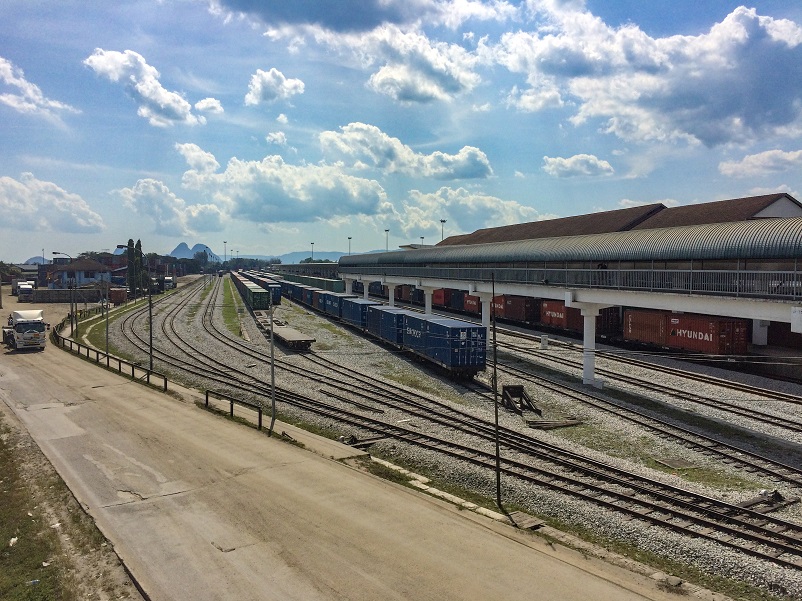 Upon arrival at Padang Besar, we went through customs and immigration out of Thailand and into Malaysia. The process was easy and pretty fast. We then went to purchase our tickets for the commuter train from Padang Besar to Butterworth. This was not so easy and not so fast. We didn’t have any Malaysian money since this was our first stop there. We assumed there would be an ATM in the train station. We assumed wrong. The ticket seller would have taken Thai Baht, but we didn’t have nearly enough (because we’d gotten good at spending our cash near the end of our time in a country). A man saw Sarah looking around the station and asked if he could help. Ever the skeptical travelers, we were wary. But he was in fact incredibly nice and helpful. In English, he advised we would have to walk to the nearest 7/11 for an ATM. It was about 15 minutes away (and up and down a massive staircase) but we did it, got money, and got back to the train station and bought our two tickets for 22.80 MYR (~$5.25). It wasn’t the entry into Malaysia we’d envisioned, but turned out just fine and was more memorable than it would have been otherwise. 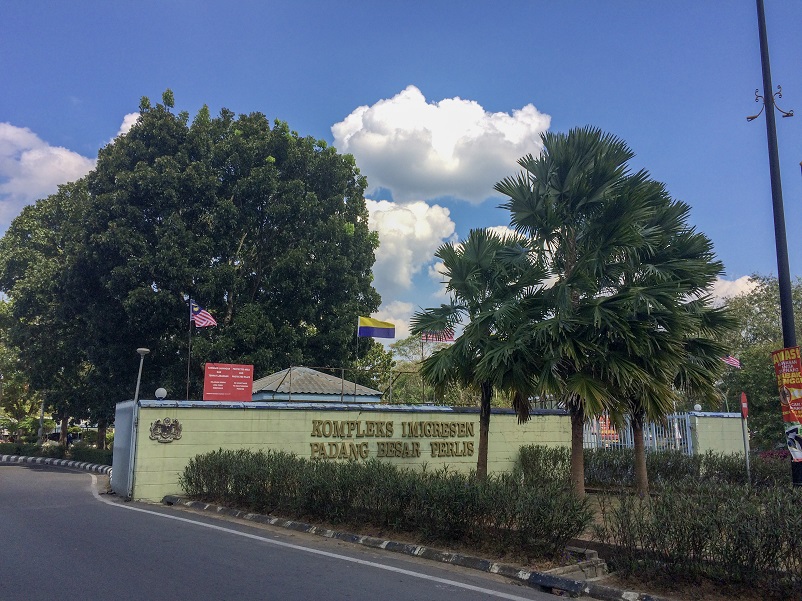 If you too end up in Pedang Besar cashless, just beware of “money exchangers” (ie, random people on the street) trying to convince you the ATM in 7/11 is broken. We were told this, but it wasn’t. Of course if you’re traveling this route, we’d recommend you exchange some money in Thailand first. The train to Butterworth itself was fine – although it was a commuter train with no room for luggage. And it filled up with students about a half hour in. But the scenery was beautiful.

Ferry from Butterworth to George Town 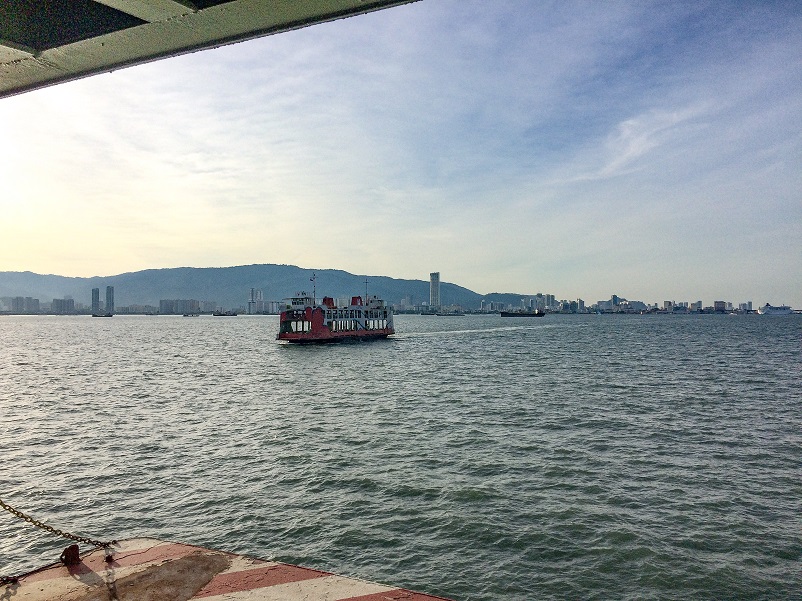 Upon arriving in Butterworth, you can take a free bus to the ferry dock or walk. We walked, and it was only about 5 minutes, although up and down some stairs. You change money for exact change at the dock and take the ferry over to George Town. Tickets cost 1.20 MYR each (which was only $0.27!). You get some nice views on the way. And then you’re there.

<< The trip was worth it! Read about our fun time eating all the food in George Town >>

How to get from George Town to Kuala Lumpur in Malaysia

Compared to the above journey, the trip from George Town to Kuala Lumpur was a walk in the park. It was just one train!

How to buy a train ticket from Butterworth to Kuala Lumpur

We recommend buying your ticket when you get to the Butterworth train station on your way into George Town. We didn’t do this and later discovered that our desired train was sold out and it cost a little more to buy the ticket online (ours were $13.25 each). We bought our tickets from Busonlineticket.com which worked well, although they didn’t accept our US credit cards so we had to use PayPal.

Ferry from George Town to Butterworth

The ferry is free going in this direction!

The train from Butterworth to Kuala Lumpur was very, very nice. It had reserved seats, air conditioning, lots of room for luggage, movies (although they were only showing Jackie Chan on our train), and (best of all!) they pass out free halal snacks! The train takes about 4 1/2 hours and was a pleasure.

We arrived at KL Sentral, the main train station, and took an easy Metro from to our accommodation. But people in the train station speak English and are helpful if you run into any issues.

We had a great short trip to Kuala Lumpur and then were off to our next destination: Singapore!

7 thoughts on “How to get from Thailand to Malaysia”