Last Updated on 21st December 2019 by Sarah and Justin

Nara is a famous city in the Kansai region of Japan. It’s home to an impressive temple with a gigantic Buddha, as well as several other important temples, but it’s most well-known as a tourist attraction for its deer. Specifically, wild deer that roam free charming visitors. It is a distinctly unique place unlike anywhere we’d ever been prior and anywhere we’ve been since. We took a day trip to Nara from Kyoto, and though it was a few years ago now, it has remained vivid in our memories. In this post we’re sharing tips, adorable deer pictures, and stories about deer shenanigans which will surely have you booking your Nara day trip. 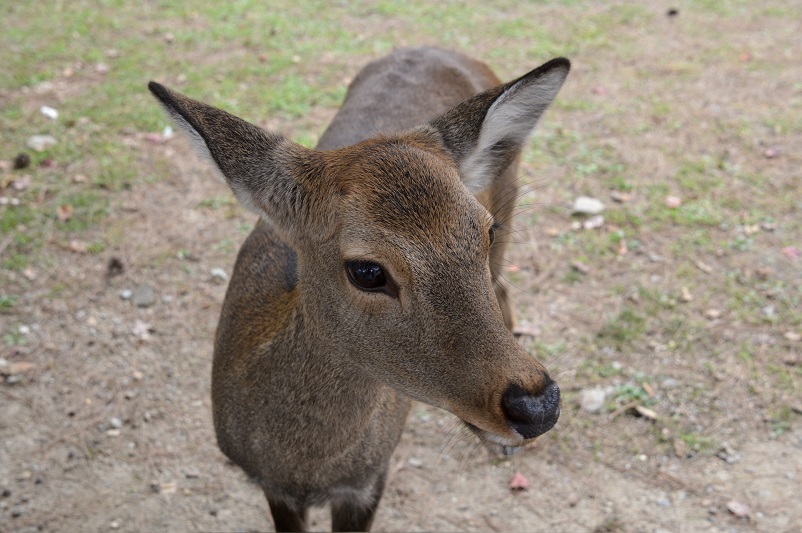 Nara deer are a designated National Treasure and are the symbol of the city. There are over 1000 wild deer in Nara Park, and deer have called it home for over 1000 years. Legend has it that one of the deities enshrined in Nara’s most famous Shinto Shrine arrived to Nara riding on a deer. In the Shinto religion, deer are thought to be messengers of the gods. So the deer of Nara were considered sacred, closely protected, and their numbers grew (source: Nara Travelers Guide). 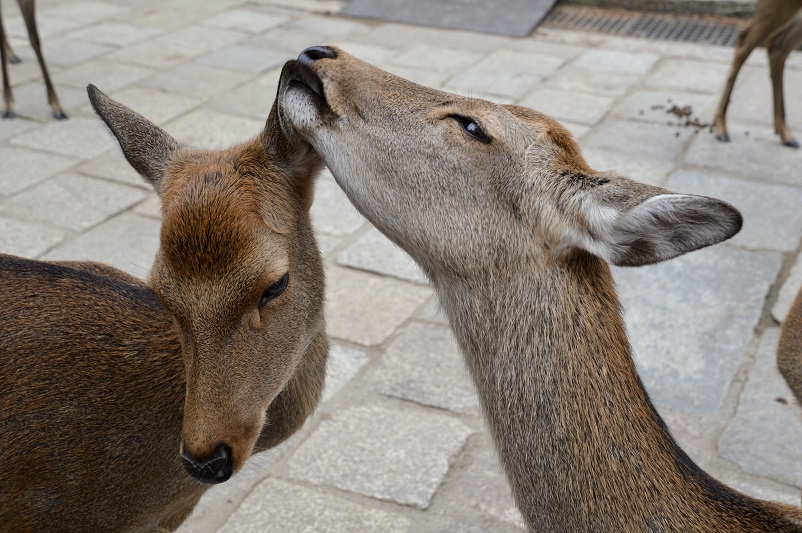 The entrance to Nara Park is about a 10-minute walk from Nara’s main train station. As you make your way there, you start to notice the deer. At this point, you see a straggler or two off to the side or in the middle of an intersection. Or in a planter. 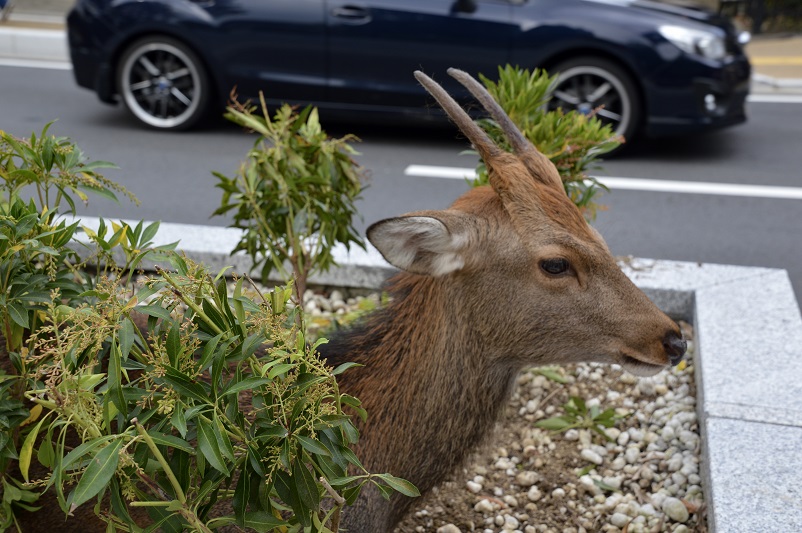 A few minute later you realize they’re everywhere. You start to see the locals selling their “deer crackers” for 150 yen on every corner (at least that was the price in 2016). Some of the smarter deer go straight to the source.

Note: a portion of the profits of the sale of these deer crackers go to a foundation dedicated to protecting Nara’s deer (source: Nara Travelers Guide). 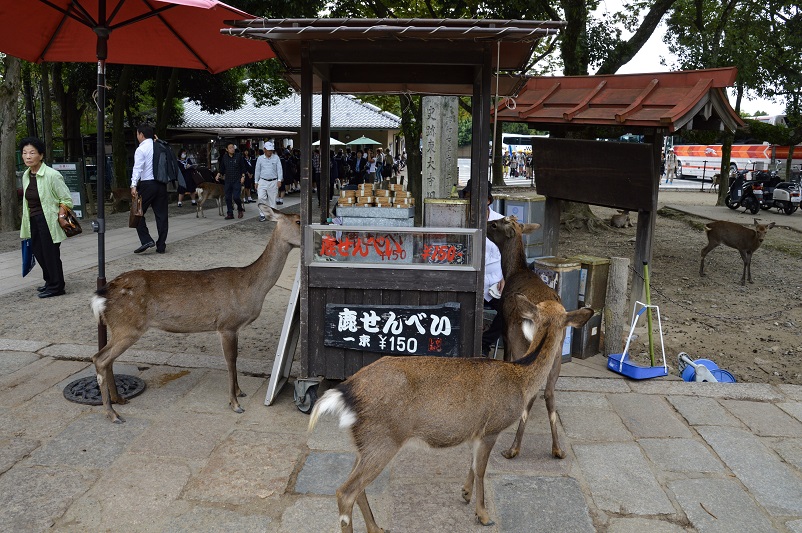 And you notice the signs with the deer rules of engagement. The sign made us chuckle, but it speaks truth! The deer are not shy. They will approach if they suspect you have cookies or any food or anything they can munch on really. (And of course they’ll assume you have food because the park is full of tourists feeding them!) 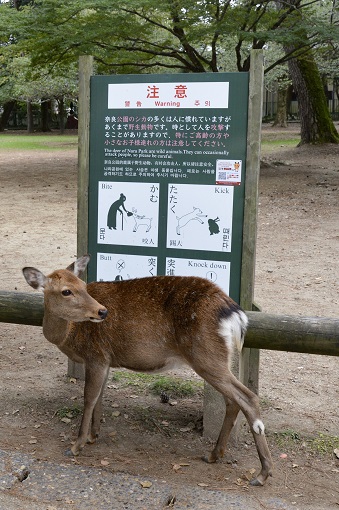 We saw one deer eat a map out of the hands of a girl in a wheelchair and another head-butt a man who was not being generous or fast enough with his deer cookies. Despite this, everyone we saw was having a lot of fun feeding and petting the deer.

Some of the deer will bow for their cookies, which is both entertaining and tiring. 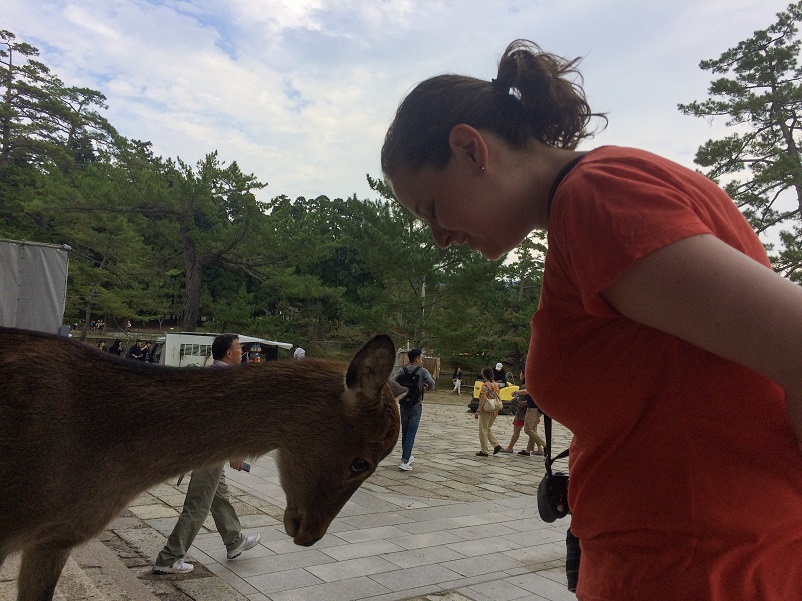 One can spend an entire afternoon in Nara just watching and photographing and enjoying being around them. Which is exactly what we did. 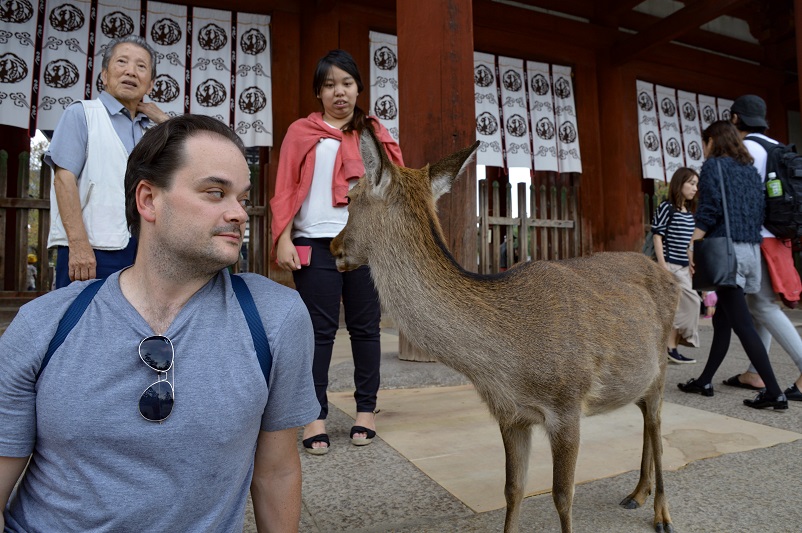 Oh yeah, we saw a couple temples too. 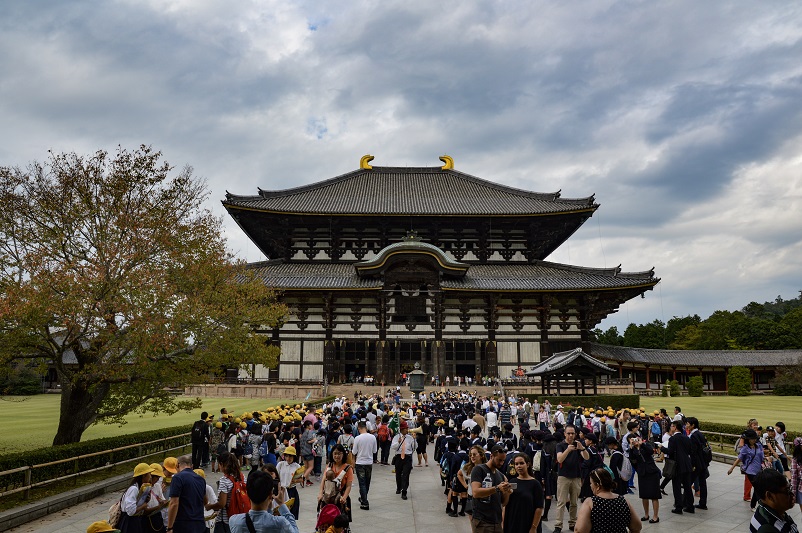 Tōdai-ji is the biggest, most popular temple (and attraction aside from the deer) in Nara. It is a UNESCO World Heritage site, most well-known for its very large bronze Buddha. It also has an entire collection of Buddhist statues in its Great Buddha Hall, which is one of the largest wooden buildings in the world.

There are two outer gates to pass through before getting to the main building. The main gate is the Nandaimon Gate, the largest temple entrance gate in the country (source: Tōdai-ji website). 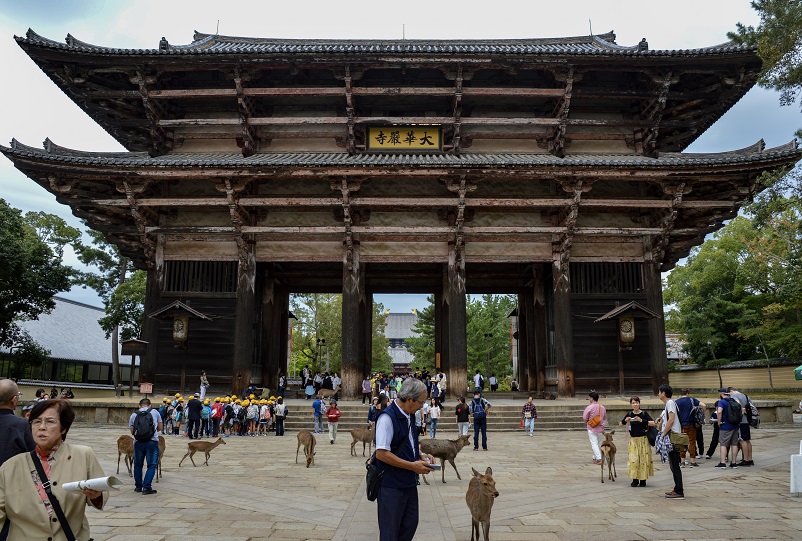 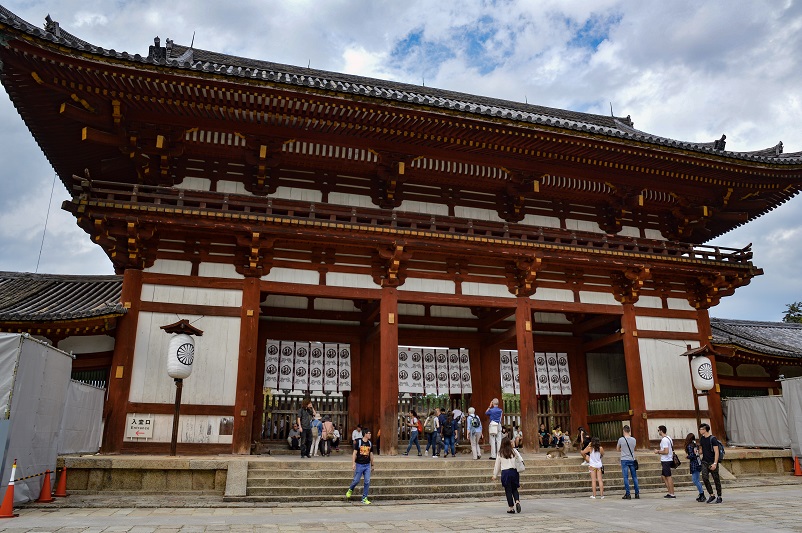 There were a lot of Japanese school children at Tōdai-ji when we were there (you can easily identify them in the first picture in the yellow hats). And apparently one of there assignments involved asking foreigners if they spoke English and asking them a series of questions. We were very popular among the middle school set and were approached several times. It was pretty cute and we were beyond impressed with their English-speaking abilities and courage. 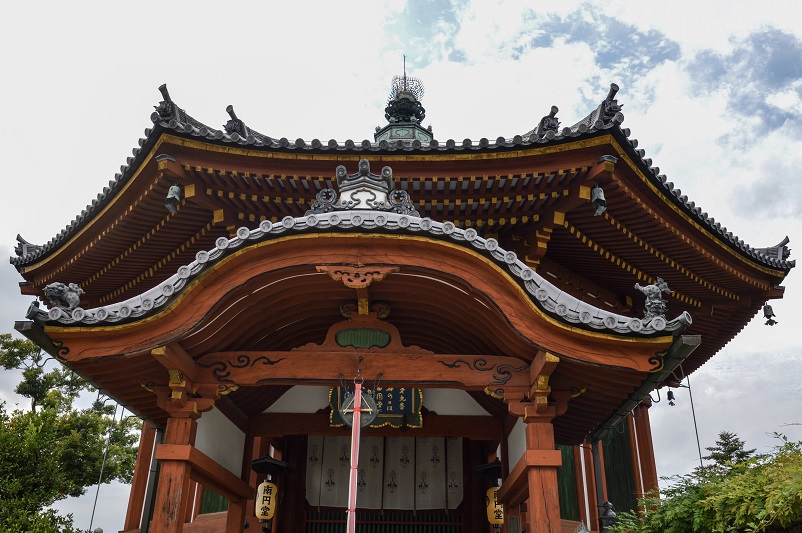 Kōfuku-ji is a much smaller temple, but it’s still quite nice to visit. It’s located near the western entrance to Nara Park. We stopped by on our way back to the train station.

The highlight of Kōfuku-ji temple is its five-story pagoda, the second tallest in Japan. 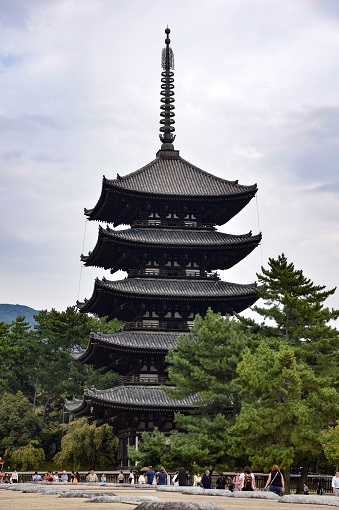 The two train stations near Nara park are Nara Station (which is the JR station) and Kintetsu-Nara Station. The former is about a 20 minute walk to Nara Park and the latter is about 10 minutes away.

We took a day trip to Nara from Kyoto. It was pretty easy and absolutely worth it. We didn’t have JR Passes, so we ended up at Kintetsu-Nara Station. If you do have a JR Pass, or it’s more convenient, you can take a 45-minute direct train from Kyoto Station to Nara Station. We took a different way that involved a transfer, but it took about the same amount of time.

You can check route options on both Google Maps and Hyperdia. You can also see the fare, which should be about 600-800 JPY depending. The JR train journey is included in the JR Pass.

You can also visit Nara from Osaka. From Osaka Station, there is a direct train to Nara Station that takes just under an hour. There are also route options to Kintetsu-Nara Station which take about the same time.

If you’re hungry when you get to Nara, we recommend grabbing something to eat by the train stations. After leaving Kintetsu-Nara Station, we saw several streets of food stalls and shops that you can pop-in before you head off into Nara Park and the temple areas. Unsurprisingly, we ate ramen. Also unsurprisingly, it was quite tasty.

2 thoughts on “Nara day trip: it’s all about the deer”