Last Updated on 20th September 2021 by Sarah and Justin

We ended our two weeks in Romania with two days in Oradea. It’s a bit lesser known than the major destinations like Brasov and Sibiu, but that was one of the things that appealed to us. If you enjoy great architecture and are looking for something a little more off the tourist track, we highly recommend it. And to convince you to add it to your Romania itinerary, we wrote this post of our favorite things to do in Oradea. 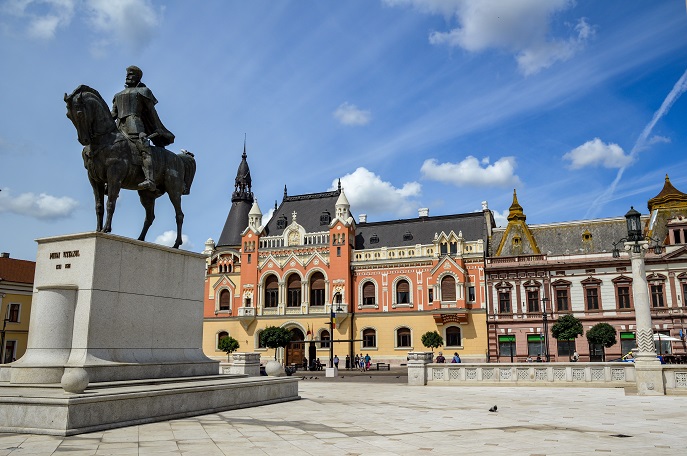 Your first stop in Oradea should definitely be Union Square. It’s relatively new and you can tell since it’s super clean and in amazing shape. The buildings that surround it aren’t very large, but they are beautifully ornate and in bright colors. We love European squares and this one pleasantly surprised us. 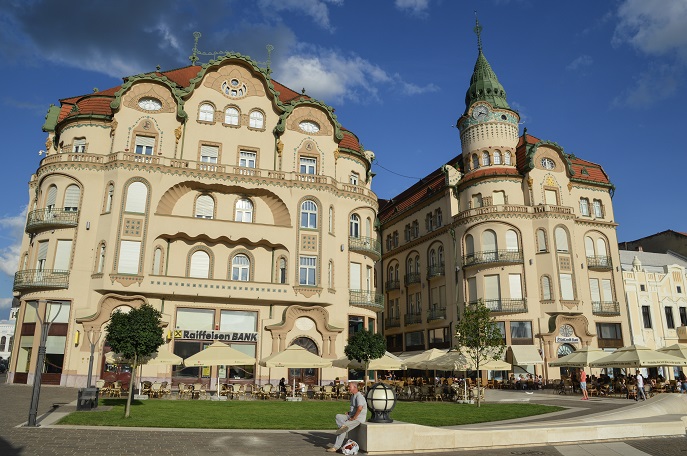 A highlight of Union Square, and Oradea, is the Black Eagle Palace. It was built in the early 20th century and is a great example of the Secession style of architecture. The buildings are grand, but almost look like something out of a Dr. Seuss book. Inside, there is a passage with stained glass featuring the palace’s namesake.
<< Read next: Places to visit in Romania: ideas for a 1 or 2 week itinerary >>

Visit the Church of the Moon

Another must-see in Union Square is the Church of the Moon. The Church of the Moon was built in the late 18th century in the Baroque style of architecture. Its facade features a moon that changes to show the lunar cycle. We got lucky to visit right before the moon was full, and it was really neat to see the moon shining behind its replica.

Walk along the Crișul Repede river 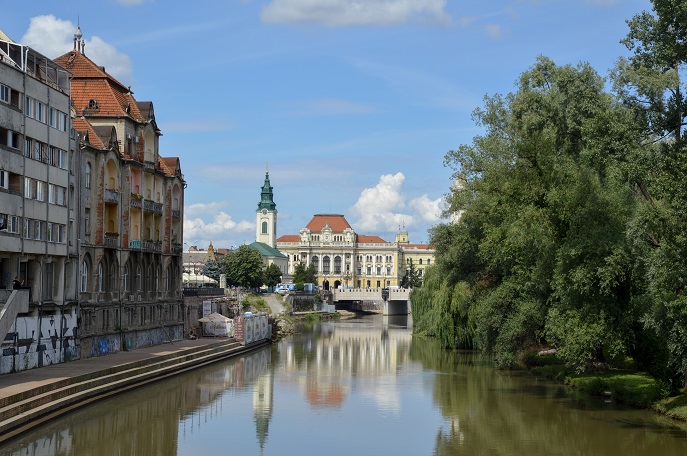 A river runs through Oradea. The Crișul Repede river to be exact. It’s nice to walk down and across and is beautiful at any time of day. But actually, it’s most lovely at sunset, so definitely go then. 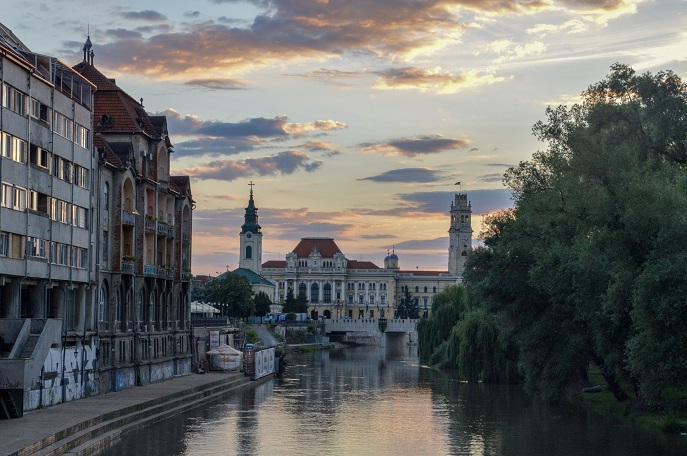 Also on the river is the Neolog Synagogue Zion. It was recently restored in 2015. It’s a massive and impressive building, but today the Jewish community in Oradea is much smaller than it once was. 25,000 Jewish people in Oradea were deported to concentration camps during WWII. 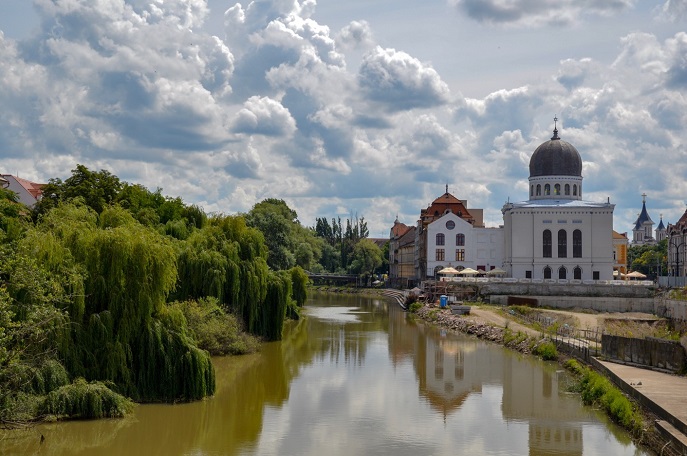 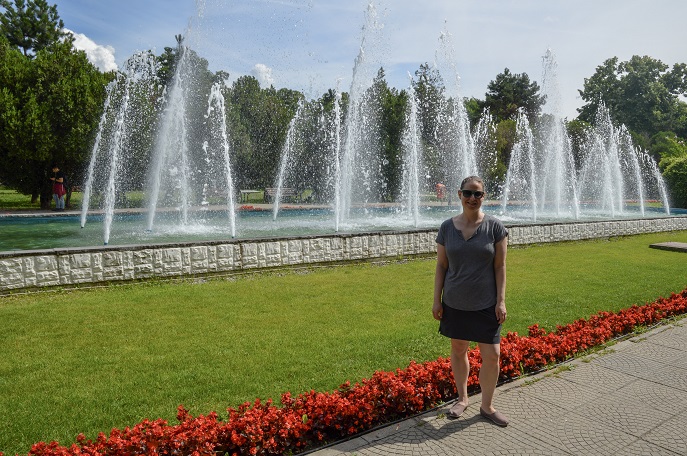 Oradea also has a nice park, Parcul 1 Decembrie. It has fountains and sculptures and if it hadn’t been so hot when we were walking around we would have hung out in it more. It’s pretty big too, and probably a good place to bike about. 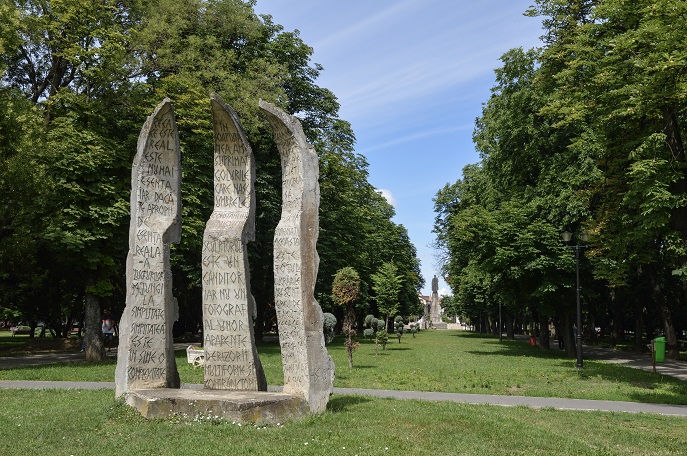 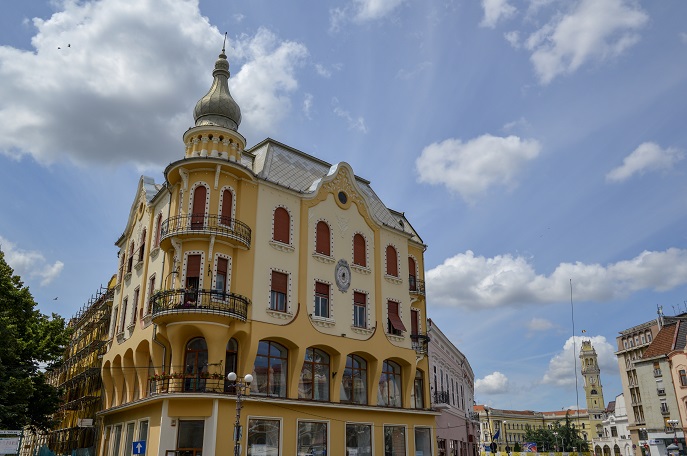 Calea Republicii is Oradea’s main shopping street and is pedestrianized. It’s on the other side of the river from Union Square. It’s lined with shops and cafes and unbelievably beautiful Art Nouveau style buildings. We weren’t staying anywhere near the street, so only walked up and down it once, but had we been staying in the area, we probably would have frequented it much more. 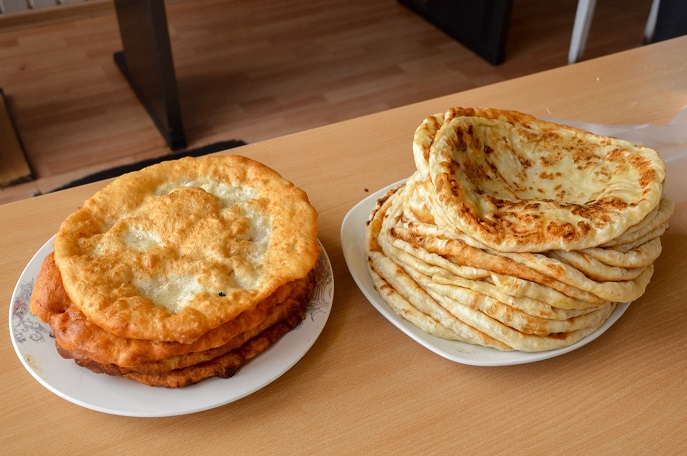 We were walking down a street in Oradea when we noticed an older woman tending to some dough in a small room. We hesitate to call this place a shop. It was pretty much just a kitchen. The dough looked and smelled delicious and after we saw two seemingly in-the-know people step inside, we followed. We had to decide between a lightly fried and a deep fried (and puffier) version of whatever she was making (we still didn’t know what it was) and chose the former. It was basically a fried pancake stuffed with cheese. She gave us a hot one in a oil-absorbing paper and we paid her 2 RON (~$0.43) and were on our way. Well actually, Sarah asked if she could take pictures of the place first… and then we were on our way. 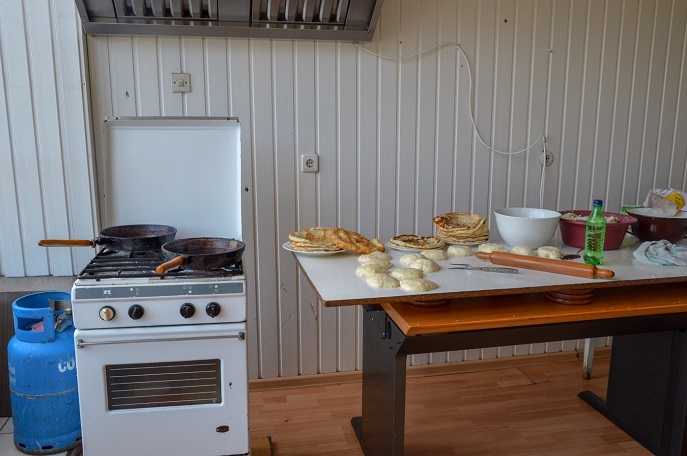 Outside, we bit into the delicious pancake and tasted yummy cheese and knew we had made the right choice, but knew we should have gotten two (at least!). We later learned the item is called plăcintă and has a Hungarian influence. We feasted on one more before we departed Oradea (and Romania), spending our last Romanian money on one at a similarly small shop near the train station. We can’t find either of these places on Google Maps, so you’ll just have to keep an eye out when you’re visiting. 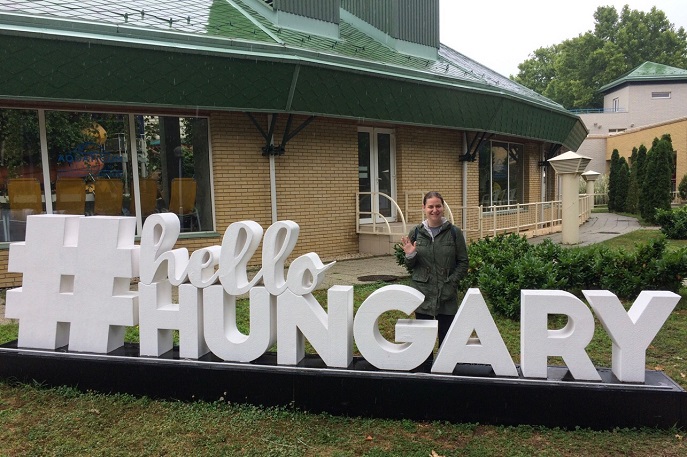 Another great thing about Oradea is that it’s pretty close to Hungary (only 8km to the border), so it’s fairly easy to extend your trip into this country. We took the train from Oradea to Debrecen, from where we would be flying home. The train trip took about 3 1/2 hours including an extended stop at the border where they checked our passports. 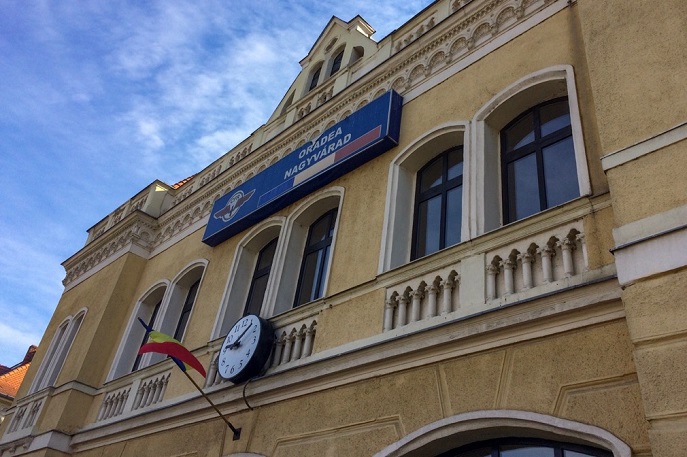 Oradea is in the western part of Romania. If you’re traveling via public transportation from Cluj-Napoca (like we did), you can take a bus (which takes about 2 1/2 hours) or a train (~3 hours 45 minutes). Due to the timetables, we took a minibus.
<< Read all our expert tips about taking public transportation in Romania >> 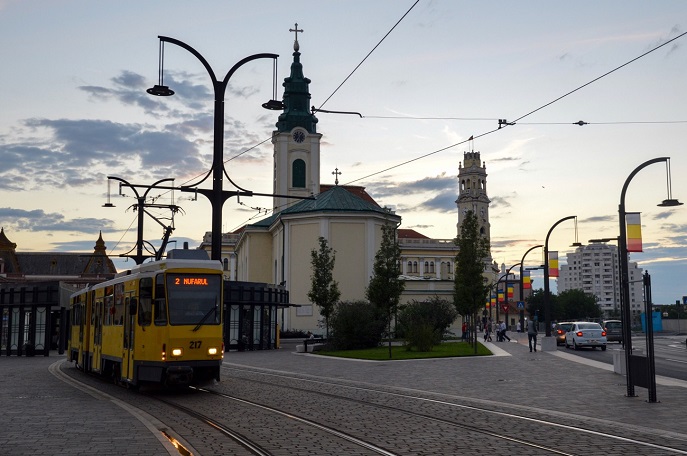 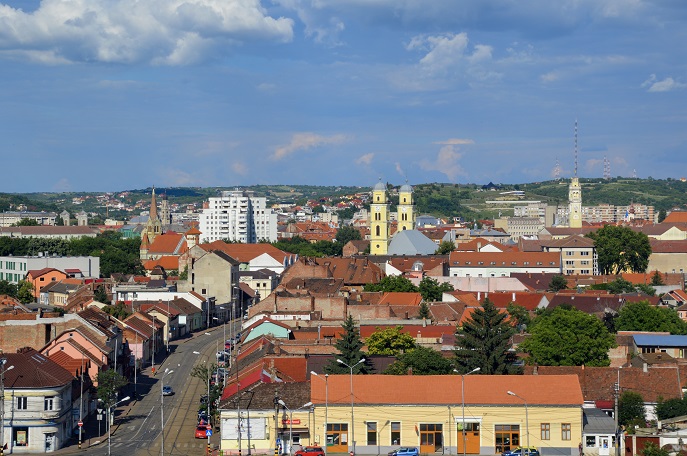 We stayed at the Ramada which was located a little bit outside the main touristic center of Oradea. We enjoyed our stay for the views (as you can see in the picture above) and the rooftop jacuzzi. The restaurant there is also quite good, albeit a bit more expensive than others (it is a hotel restaurant after all).

Close to the Ramada is an amazing and massive supermarket, the German chain Kaufland. If you are staying for a while, definitely stock up on supplies there.

As we mentioned in our last post, we thought Oradea was quite easy to get around by walking. Unlike some of the other places we visited in Romania, it’s fairly flat and most of the streets were well-maintained (especially Union Square). Public transportation in Oradea is wheelchair accessible: trams and buses are equipped with ramps. We thank Accessible Romania for providing us with this information and recommend that anyone who has further questions about accessibility in Oradea or Romania as a whole contact them directly.

So have we convinced you? Don’t you want to visit Oradea?

14 thoughts on “Things to do in Oradea, an underrated city in Romania”