Last Updated on 27th February 2020 by Sarah and Justin

Over the past four years, we’ve visited the most popular destinations in Poland. And we’ve gotten to see and taste how Polish craft beer just keeps getting better and better. So during our weekend in Poznan, we made it a priority to visit some of the top beer bars to further our exploration of the country’s craft beer scene. (It’s hard work, but someone’s gotta do it!) Whether you’re heading to the city for a weekend break or as a stop on a longer trip, you’ll definitely want to enjoy the great Poznan nightlife and check out these craft beer bars.

We knew Poznan would have great beer. That’s one of the reasons we visited. But we didn’t know what else to expect from a city that we’d heard was especially popular for stag and hen weekends. While the main square and streets of the old town did get a little rowdy, the bars we went to were not. At all. We even went out on a Saturday night (something we normally try to avoid!) and were able to find quiet tables in cozy establishments where we could enjoy our beers and our time together. So our expectations of Poznan nightlife were indeed exceeded. It’s lively and fun, but appropriate for and welcoming to aging craft beer lovers like us.

Four Poznan bars where you can try Polish craft beer

We must admit that the tap list wasn’t our favorite at Piwna Stopa, but even despite that, it was absolutely our favorite bar in Poznan. It is a nicely sized spot with comfortable areas both inside and outside. The bartenders were friendly and knowledgeable, explaining the beers we’d never heard of and of course letting us taste.

Again, the tap list didn’t have many things that were truly our style. But their plentiful wheat beers and IPAs were season-appropriate given that it was the beginning of June when we visited. We enjoyed our selections.

Sarah had a really interesting collab between Pinta and Old Beersel called Les Cassis Fous. It was a red sour with (unsurprisingly) cassis. She also had a raspberry cider from Chyliczki. It was a dry style, but not dry enough given the raspberry.

Justin tried the Raymont Silnika, a New England Triple IPA, from Karuzela. He also had the most interesting beer on tap, the All the Rage collab between Golem and Wagabunca. The bartender told us the brewers asked customers what flavors they hated most in beer and threw them all into this one. If you’re wondering, that includes red habanero and chipotle peppers, licorice, cinnamon, and fenugreek. It was actually pretty tasty even with that kitchen sink ingredient list.

In addition to the 16 beers they have on tap, Piwna Stopa has a refrigerator full of bottles behind the bar. We didn’t even dip our toes into those, but one can definitely have a good time/long night at this place. It should be mentioned, the beers we drank here were on the higher side price-wise, with the ones we chose averaging 16 PLN per.

The first night we stopped by Lot Chmiela it was packed with people watching the Champions League final. So we skipped it. But we are glad we went back the next evening, where we had pretty much the whole place to ourselves.

On the front window, it claims to be a travel themed beer bar. Obviously we were hooked. The front room looks sleek and cool. And then, there’s an outdoor garden area outside. For the hour or so we were there we were serenaded by the Beatles (Sarah tried really hard not to sing along the whole time). It was a pleasant environment and evening, made even more perfect by the beer.

Sarah had the Imperial Oatmeal Stout by Mazurski (for a reasonable 12 PLN) and Justin had the Black Curris Russian Imperial Stout by Recraft (a splurge at 25 PLN). Justin’s had more depth of flavor and was a bit more interesting, but we really like oatmeal stouts and this was a great example of the style. They were among our favorite beers we tasted in Poznan.

Dom Piwa is a small spot on a quiet side street in the Pozanan Old Town. But it’s bursting with beer! With 12 taps and a ridiculous number of bottles lining its shelves, it’s a must-hit for anyone looking to delve deep into the Polish craft beer scene.

We stopped by on our first night in Poznan and enjoyed two absolutely delicious, totally different beers. Justin had the Dary Losu from Ziemia Obiecana, which was a peach and passion fruit sour ale (Justin’s current favorite style). Sarah had the Kominiarz by Profesja, a very solid “extra” stout. The large sour was 14 PLN and the small stout was 10 PLN (and those prices were pretty average for all the draft options). 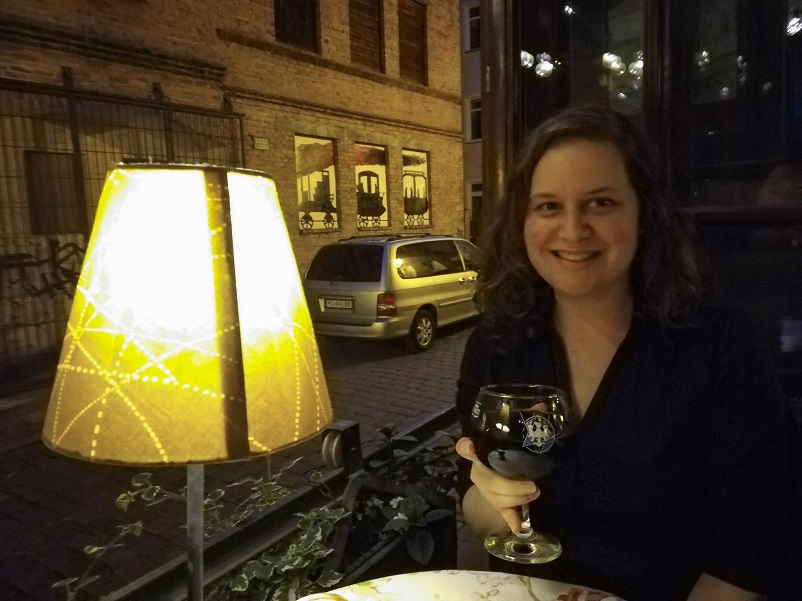 Stacja Cafe wasn’t on any of our lists of best craft beer bars in Poznan, so we’re happy we found it. We popped in after being unimpressed by a bar that was on our list and made a beeline for the fridge which had some great looking options.

We only drank one beer here, and we split it between the two of us (shocking we know). It was the Komes Porter Bałtycki from Browar Fortuna, and it was a good nightcap. Strong, smooth, and rich, its only negative was that the finish tasted a bit too much like licorice. But it only cost 10 PLN!

Stacja Cafe was a really relaxed spot, which surprised us since it was a Saturday night and it’s located only a block from the main square in the Poznan Old Town. But it was cozy and big enough to spread out. We particularly enjoyed our window seat overlooking the cobblestones.

<< Visiting other places in Poland? Read where to drink Polish craft beer in Wroclaw >>

Other places to try craft beer in Poznan

We went to Na Winklu for the pierogis, and they lived up to the hype. (But that’s a story for a different post.) We washed our (possibly too many) pierogis down with two beers from Browar Za Miastem. Sarah had their Sloneczny Dzien, a wheat mango beer. Justin had their Letnia Przygoda, a session IPA with orange. Na Winklu only serves bottles, and they were 11 PLN each.

We seem to be enjoying fruity beers more these days. We will never make the leap to the dreaded radler (never ever), but a bit of fruit taste in the background of a solid beer is something to love. Especially on a hot day, and boy was it hot when we visited Poznan. Both beers were quite good. The taste of orange really burst from the IPA, and the mango lent a balanced sweetness to the wheat beer.

Our final recommendation for where to find the most incredible selection of craft beer in Poznan is in the Carrefour at the Posnania mall. It’s a good thing we only saw this place on our last day in Poznan because we didn’t have a fridge in our hotel room and we didn’t have checked luggage to bring any of it back with us. We got two beers and attempted to chill them down enough to be drinkable in our bathroom sink. It didn’t work that well, so it’s a testament to the quality of these beers that we enjoyed them so much.

We had the Komes Russian Imperial Stout by Browar Fortuna and the Sourtime mango imperial IPA by Browar Maryensztadt. The stout was better than the Komes porter we had at Stacja Cafe, but perhaps only because we prefer the style. The sour was just sour enough but also quite refreshing (and would have been even better had it been colder). Both only cost around 8 PLN per bottle. If you have access to a fridge during your stay in Poznan, we highly recommend going on a rampage at the Carrefour.

Where to find the Carrefour at Posnania: Pleszewska 1, 61-136 Poznań, Poland

<< Read next: best bars in Rotterdam for craft beer >>