Yep. We went to an owl cafe in Tokyo. We were those people. It was expensive and absurd but wonderful and unforgettable. We had a great time.

Owl cafes are what came after cat cafes. If you didn’t know, cat cafes are big in Tokyo. But they’re like yesterday’s news. Now the even bigger thing is to go to an owl cafe. Us being the super cool trendsetters we are, we had to see it for ourselves.

Sarah did a lot of research to find the best, most pleasing owl cafe experience. She settled on Akiba Fukurou, which bills itself as a calm place to go to relax. Because when you want to relax, you think birds of prey, right? Even though it was more expensive than some of the others, it seemed like it would be the least insane and that it had the most owls. It is in the Akihabara neighborhood, which was easy to get to from where we were staying in Asakusa.

A detailed account of our time at Akiba Fukurou

You must reserve in advance on their website. It costs $20 per person for ~45 minutes with the owls. They tell you to show up 10 minutes before your time slot and sit on these chairs outside the cafe. While you’re waiting, they give you an instruction manual on what to do inside and how to treat the owls. 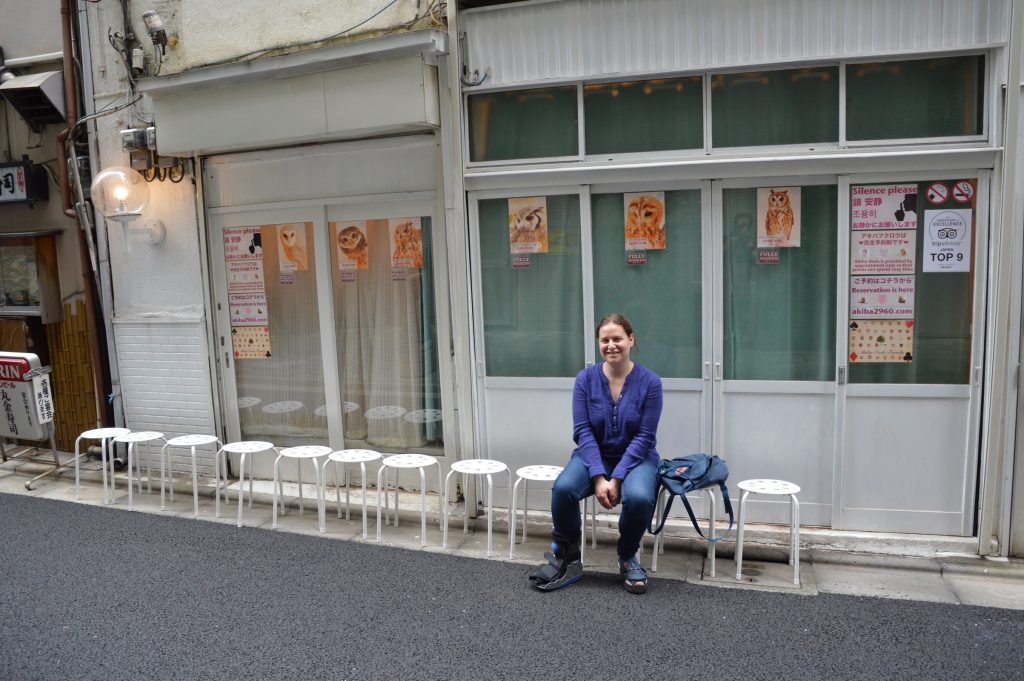 They give you very specific directions on how to get there from the Akihabara station, but there’s pictures of owls all over the place so it’s hard to miss.

Once inside, you realize there are owls everywhere! 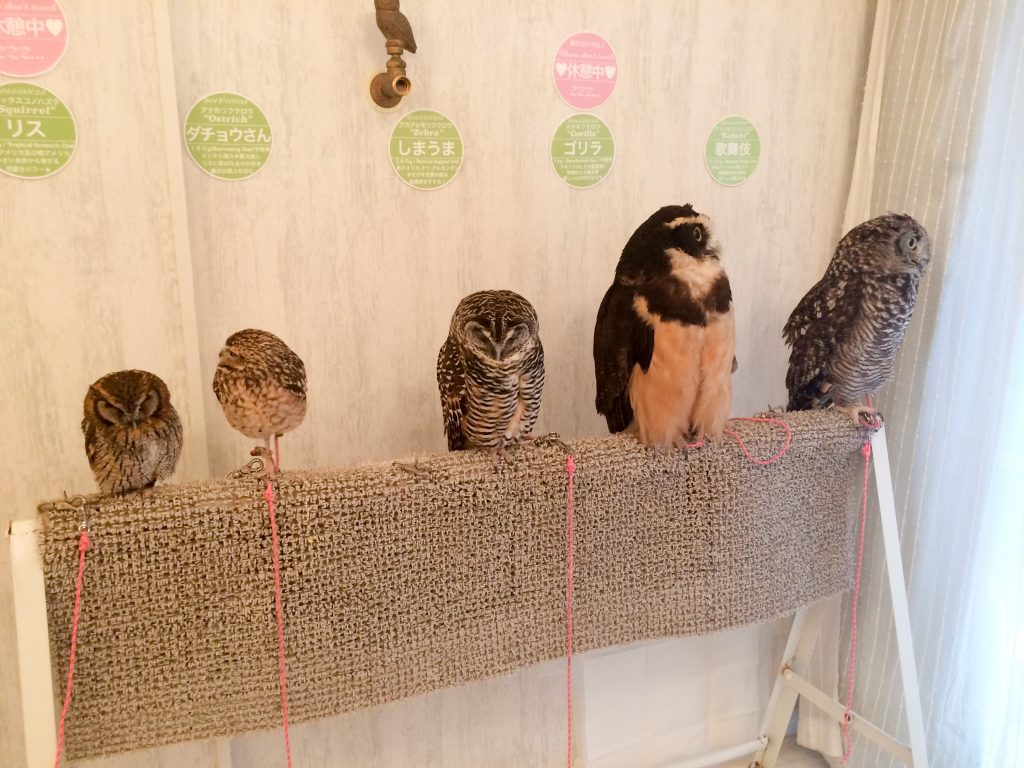 It’s a bit jarring. They stare. 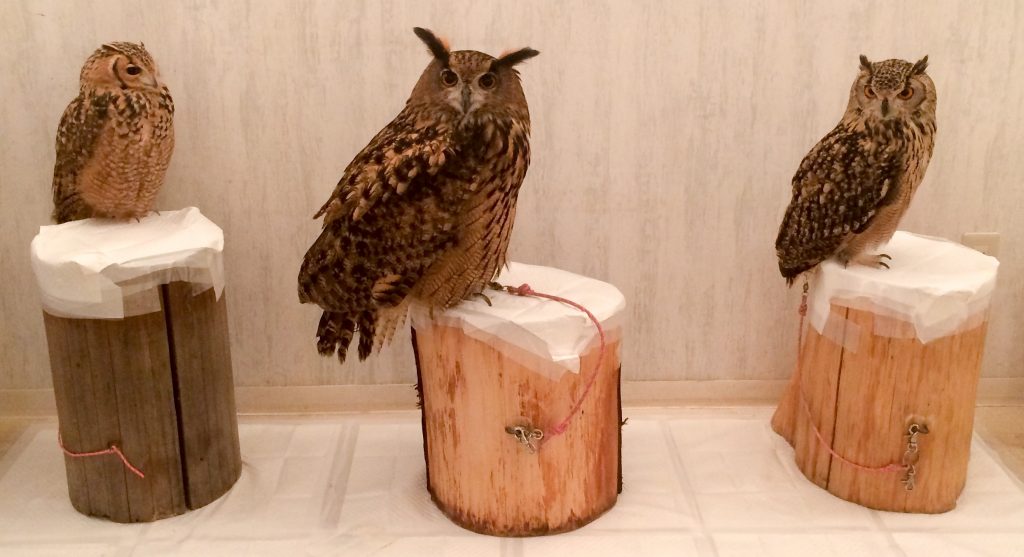 After cleaning your hands with alcohol, you are directed to sit down at one of the tables. That’s the only “cafe” part about the place. There’s no food or drinks. It’s just a room full of owls with tables and chairs. 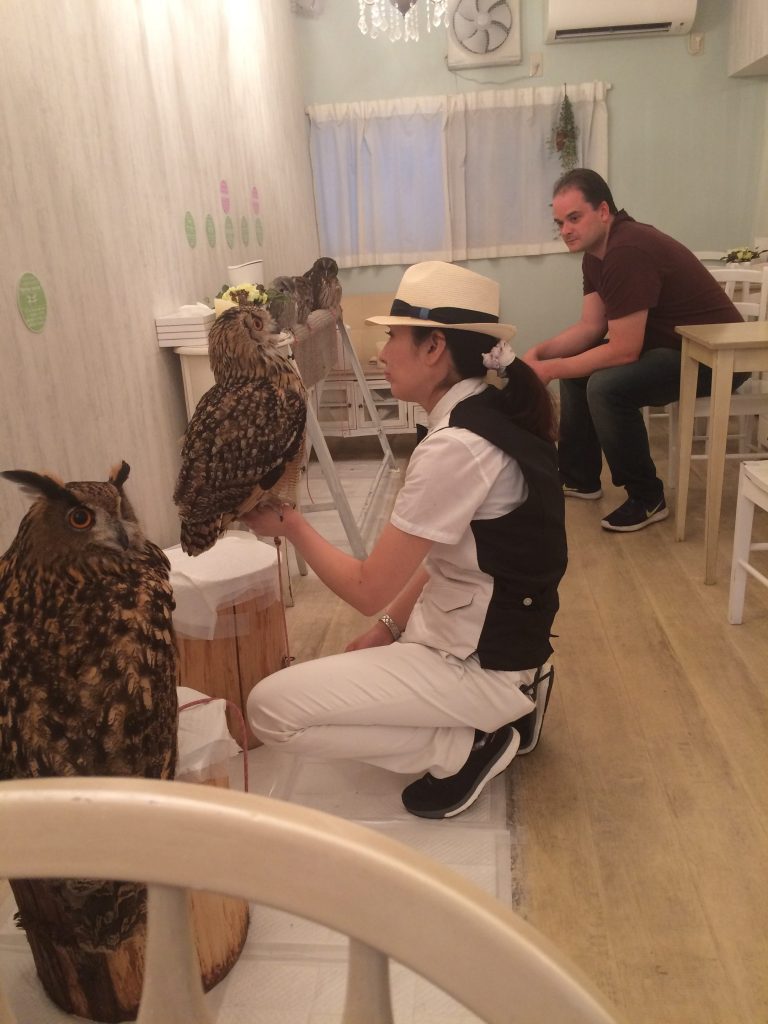 They teach you how to pet the owls. Owls don’t like being pet too much or too hard – they prefer a gentle stroke right above the eyes. Or so we’re told. Some of the owls have signs indicating they are sleeping and you can’t pet them. It’s nice to know they get a little rest. We wandered around the room for a while admiring the owls, taking pictures, and attempting to pet some of them. 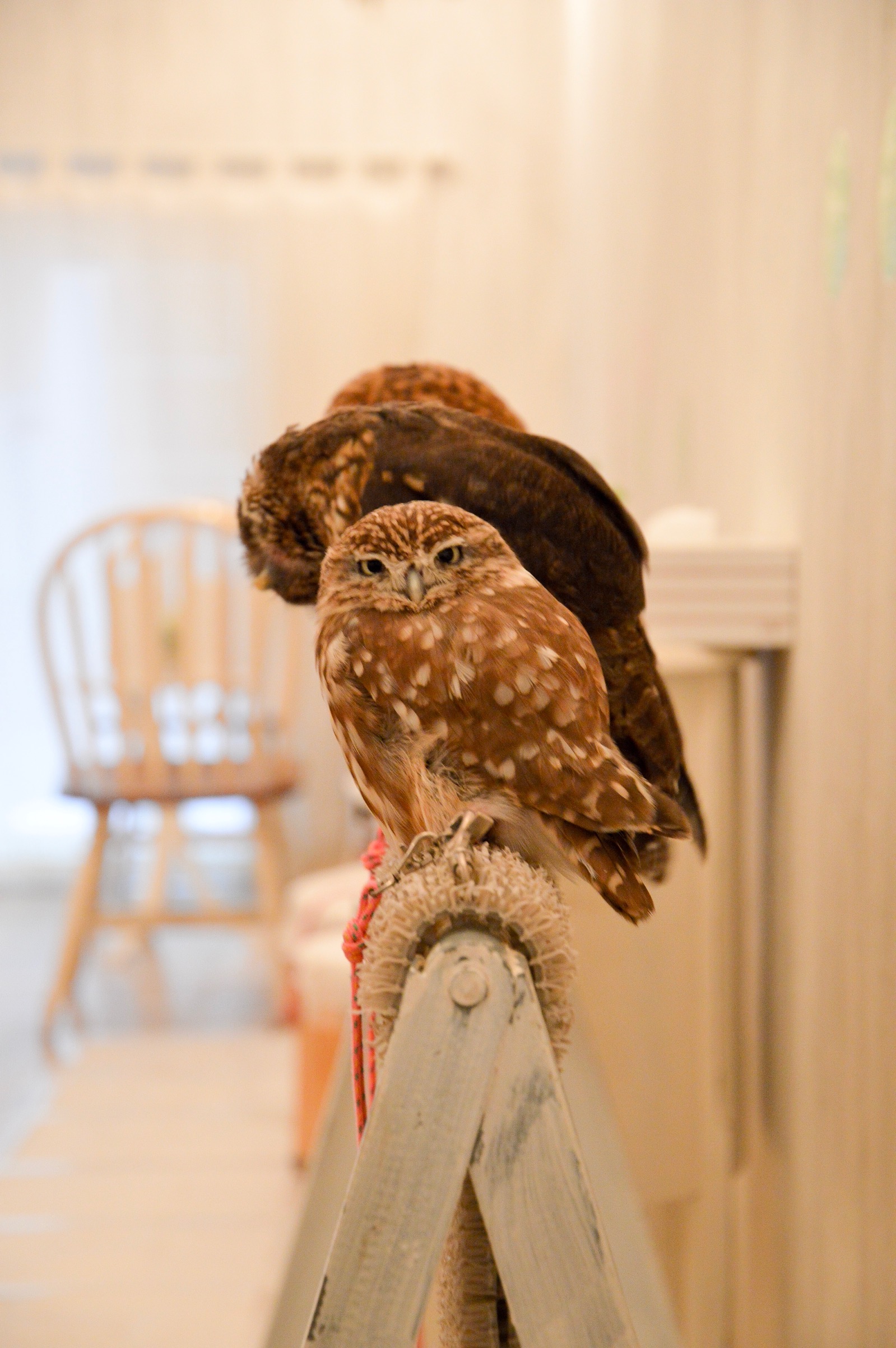 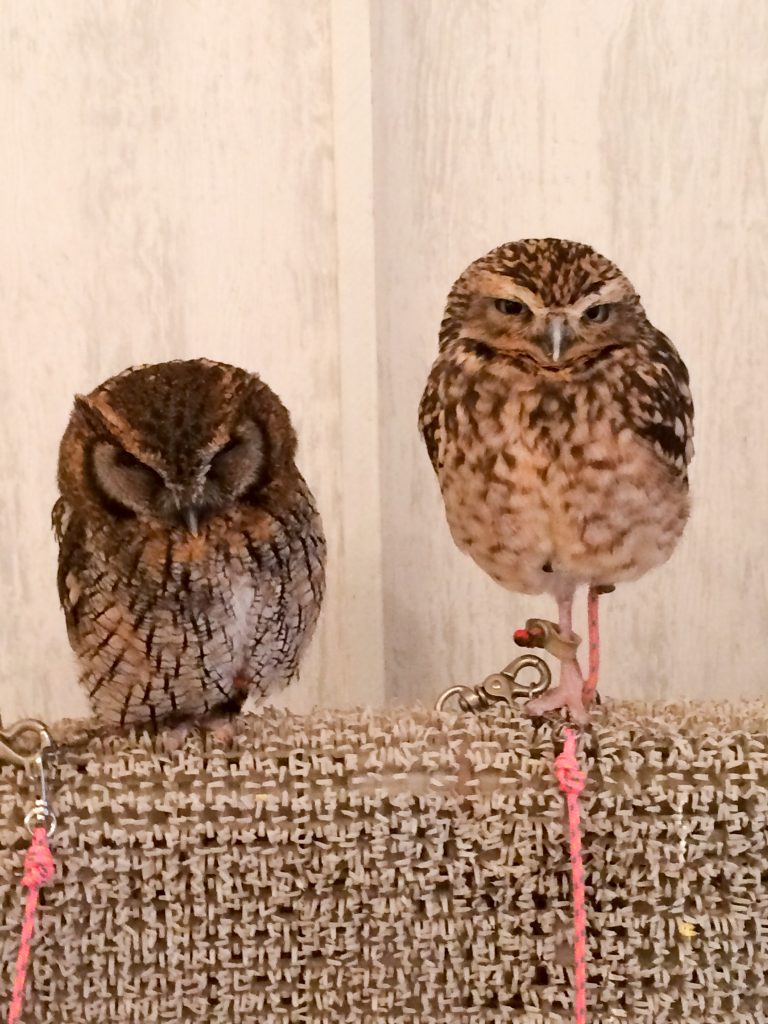 Each person is allowed to hold two owls during their time there. That’s when the fun begins. Once you choose your first owl, the host brings it to you and prepares you for your photo op in a small area in the shop. We each chose our owls and then were told that they weren’t friends and that we had to keep them away from each other. Then we were told to get closer together (just us, not the owls!) and to say cheese! This somewhat terrifying situation made for a really awesome picture. 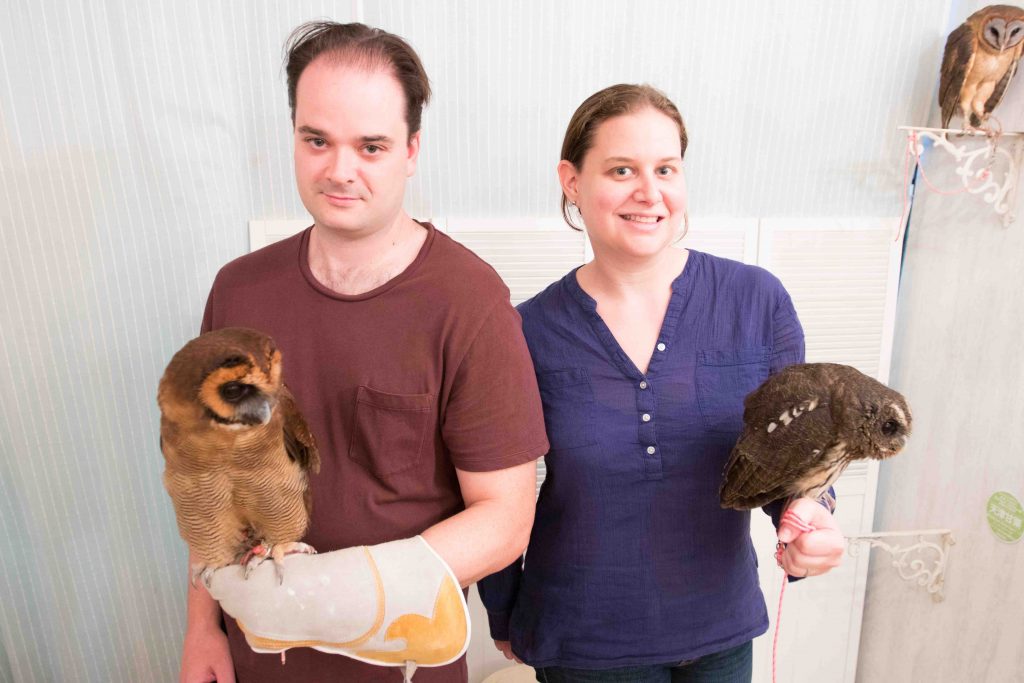 Note: they give you a laminated copy of the picture as a souvenir and email it to you after your visit.

Afterwards, we were instructed to sit with our owls, but since our owls were mortal enemies, we had to sit on opposite ends of the shop. Despite all this, holding an owl is pretty cool. You feel their talons digging into you, but they’re pretty calm and actually quite relaxing. 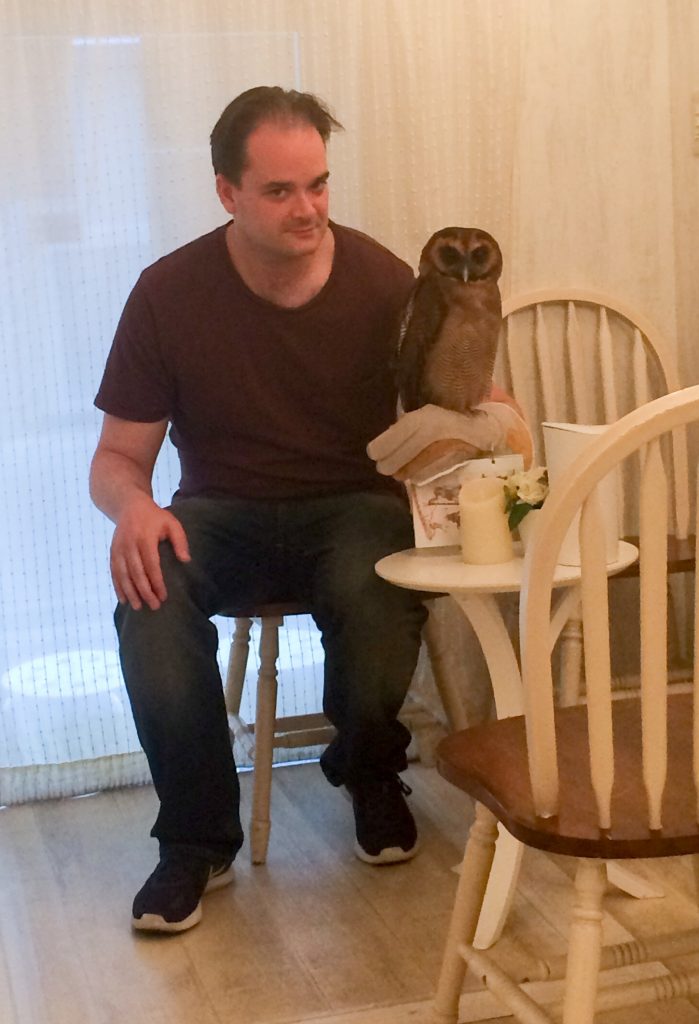 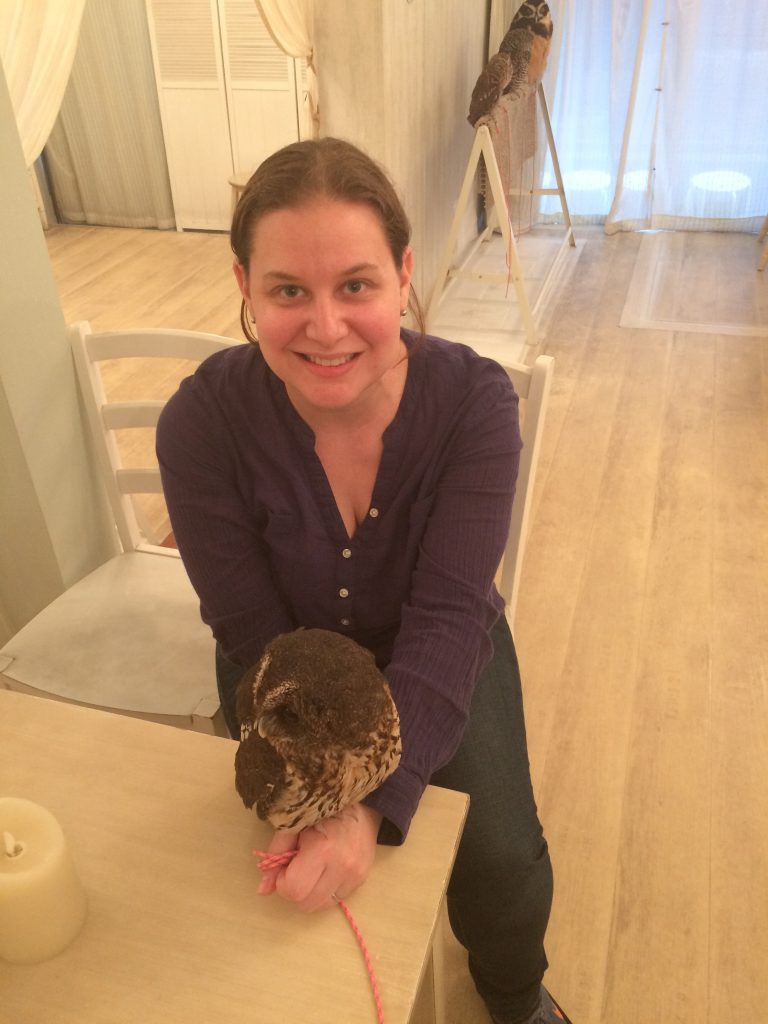 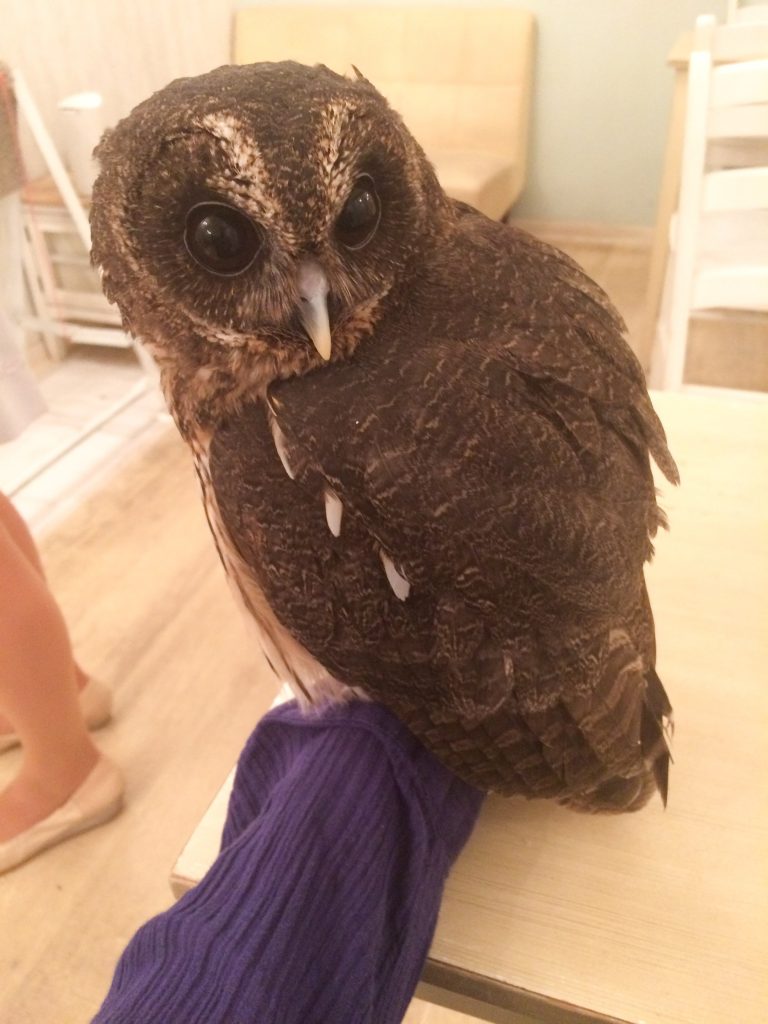 After a while we let our first set of owls go and hung out with the others. We selected our new owls, but before committing, asked if they were friends. Turns out they were best friends! Also turns out, they enjoy sitting on people’s shoulders instead of their arms. In this scenario, we were able to sit next to each other, but each had owls on our shoulders. It was so fun. 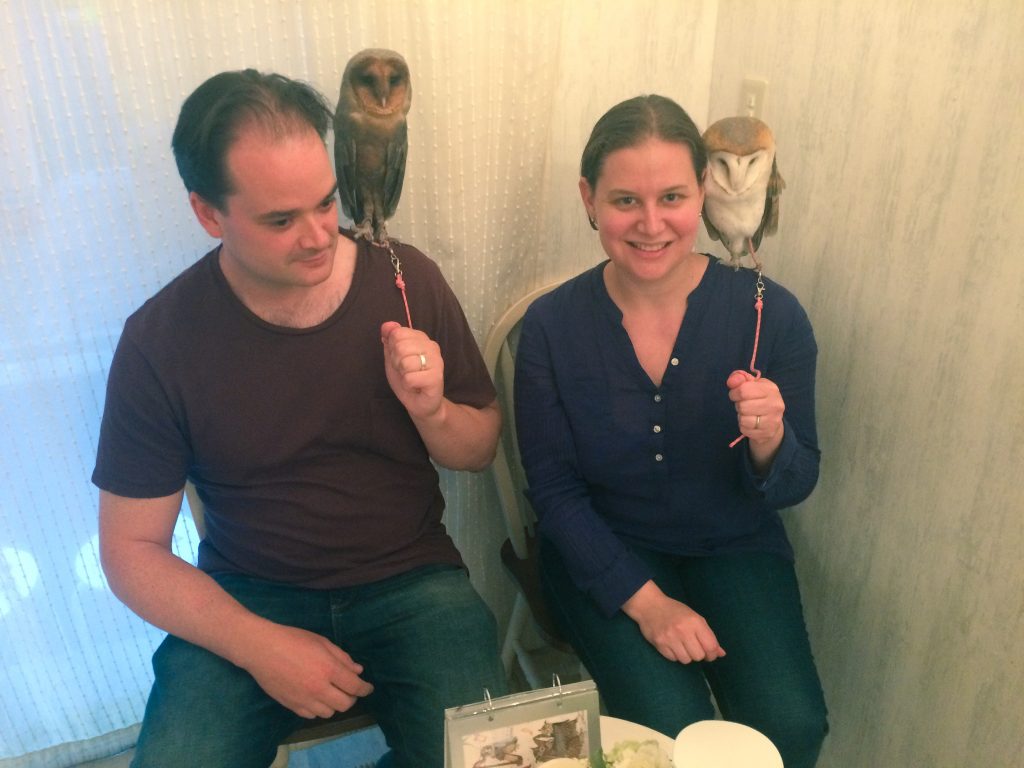 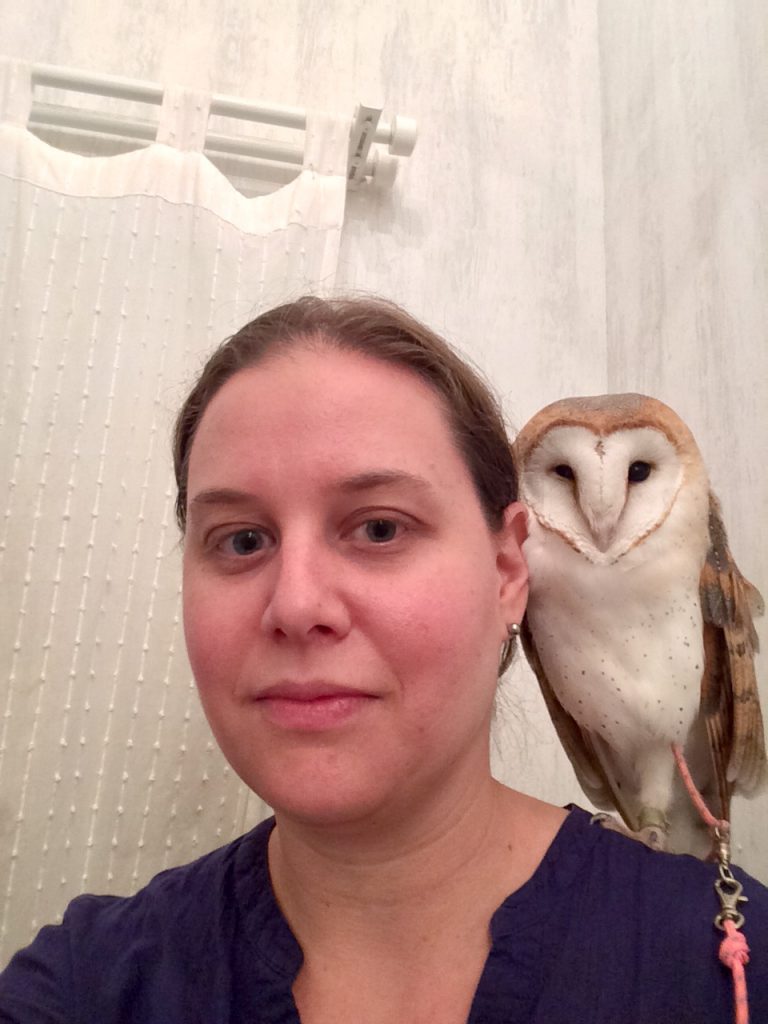 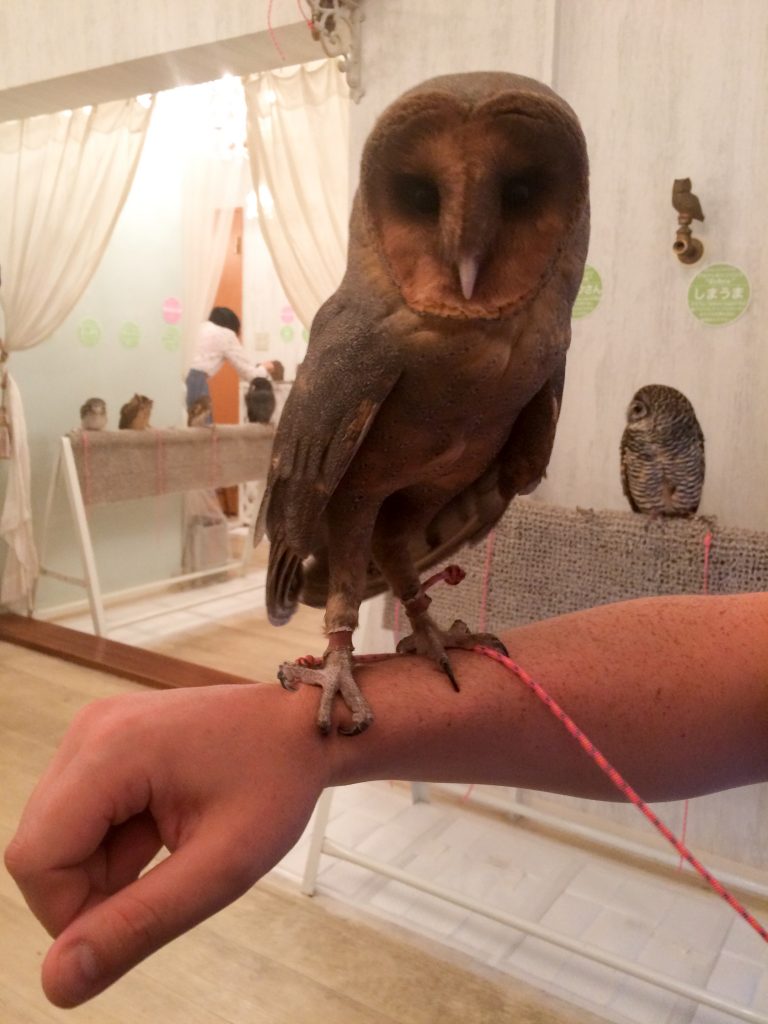 It got even more fun when Justin’s owl jumped onto his head (and then off, and then on again). Sadly, no photo evidence of this exists because Sarah was laughing too hard at the time.

In sum, we thoroughly enjoyed our time at Akiba Fukurou. I’m not sure we’ll ever go to another owl cafe ourselves (once is probably enough), but we would recommend it to any owl-loving person who finds themselves in Tokyo with $20 and an hour to spare. 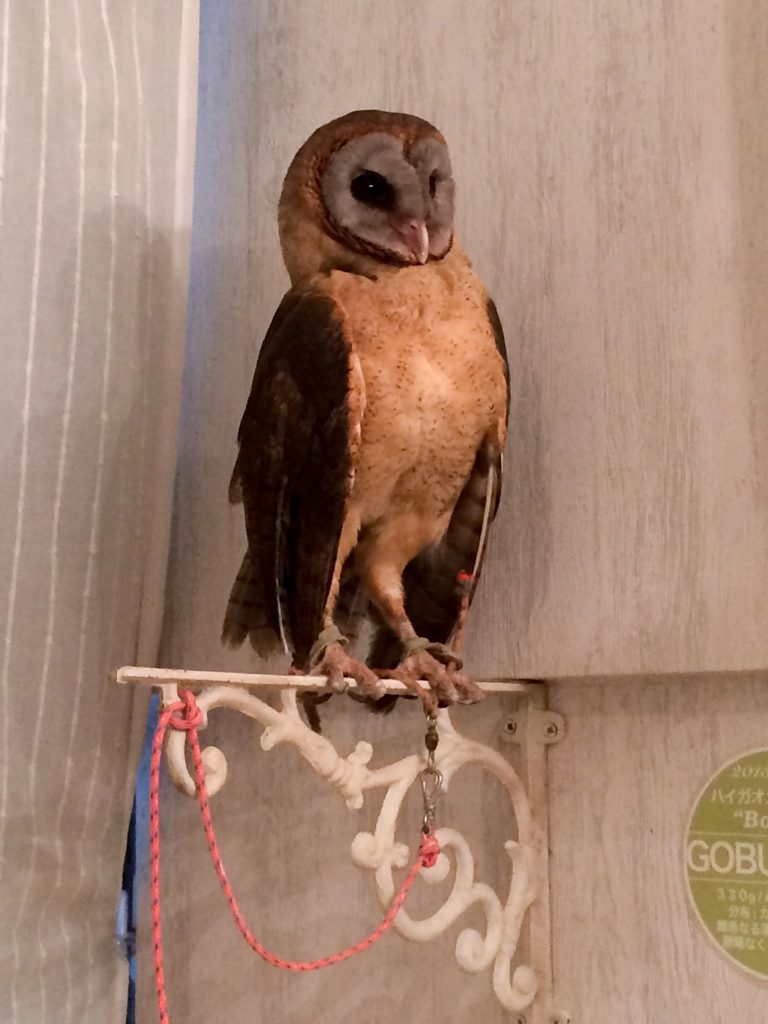 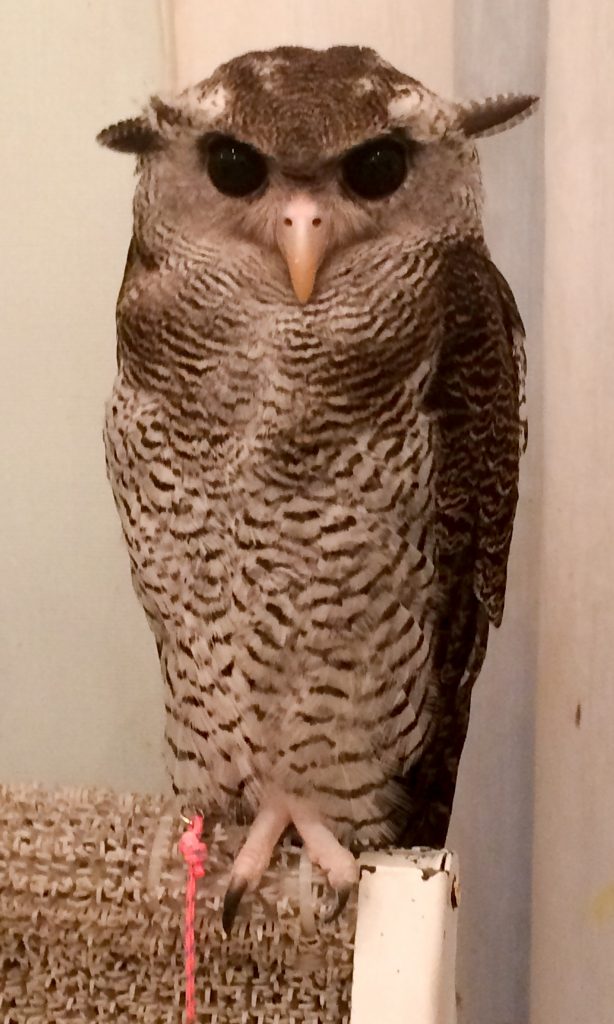 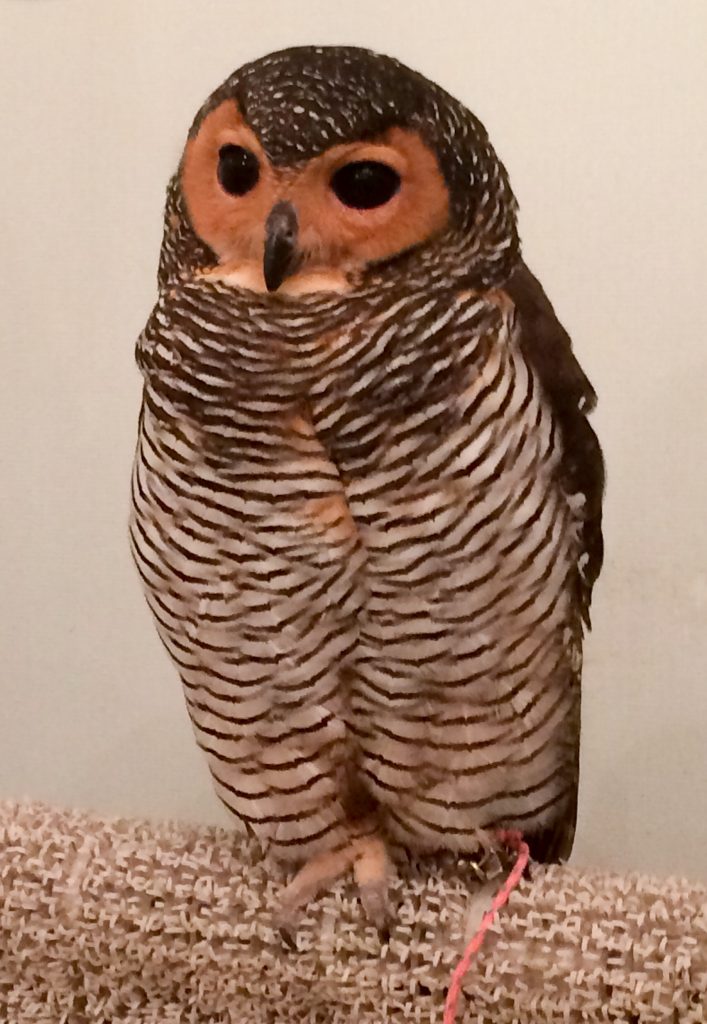 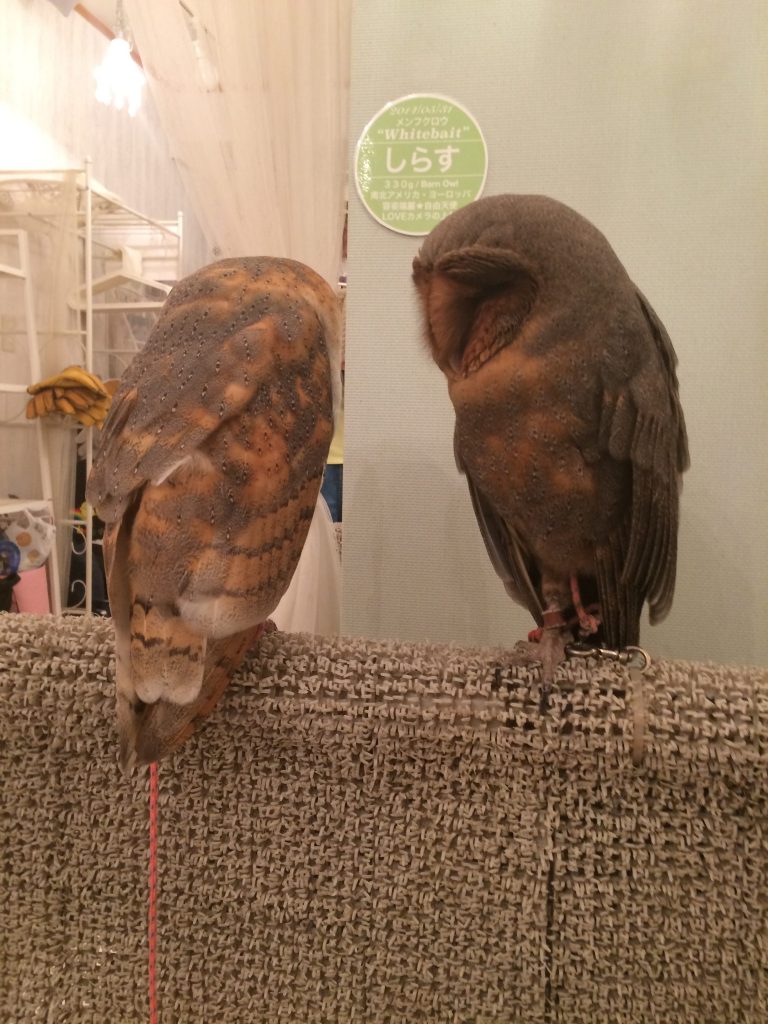 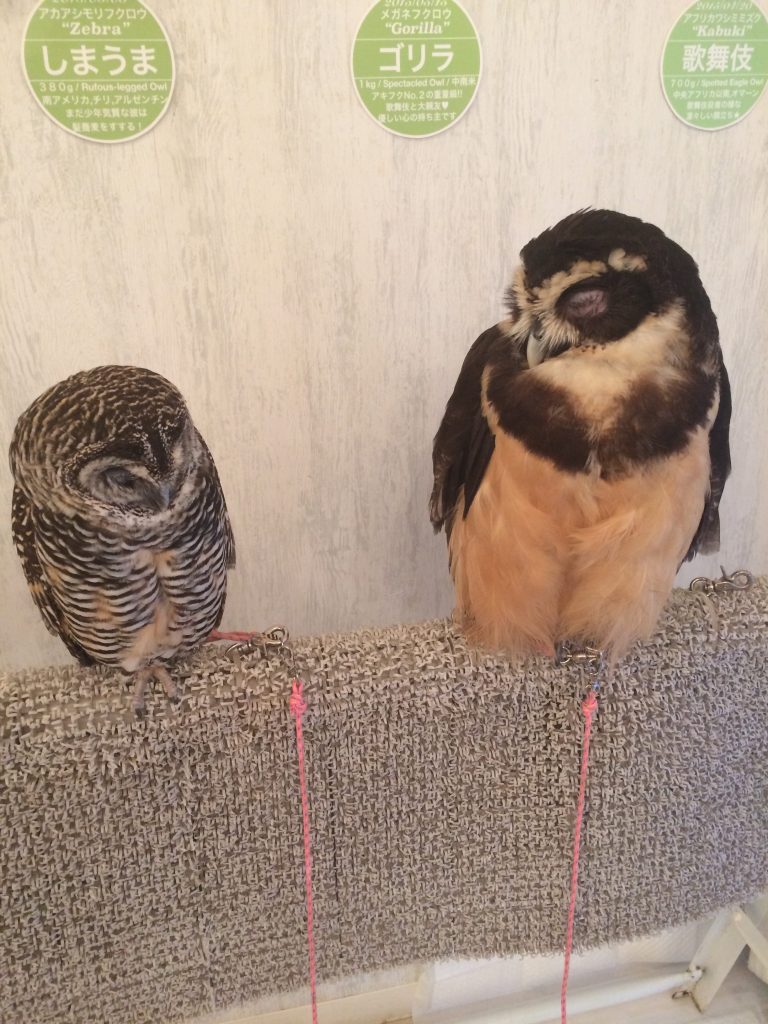 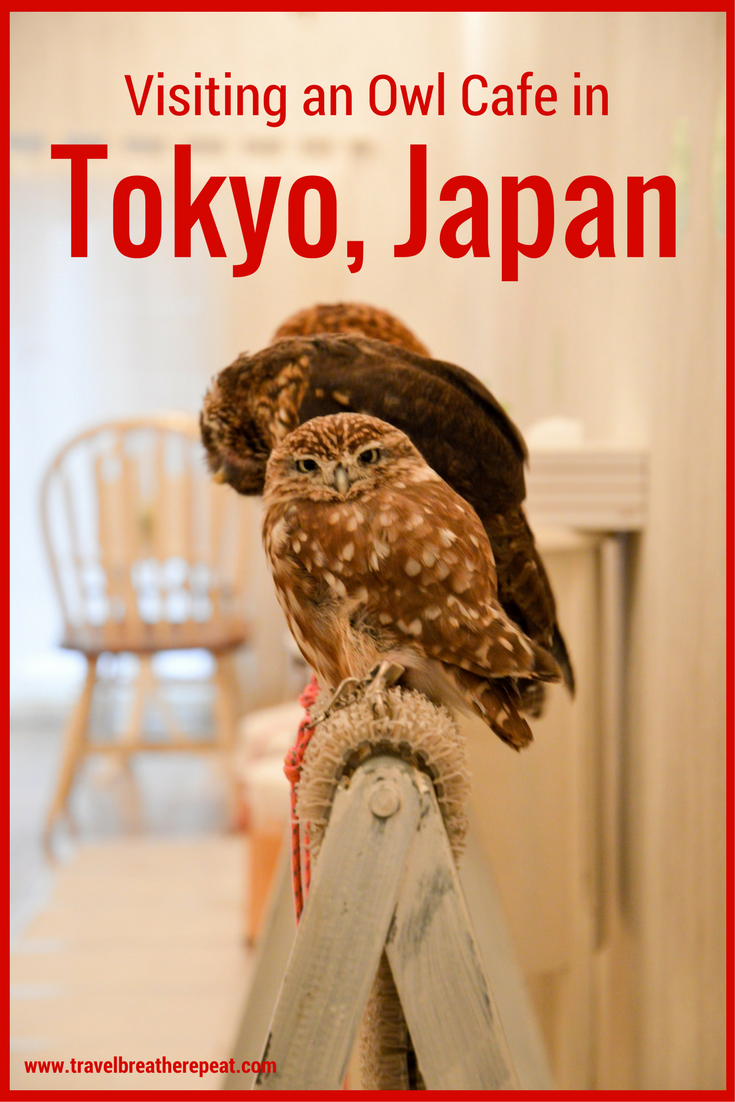 One thought on “Owls in Tokyo”