Last Updated on 14th January 2020 by Sarah and Justin

When you visit Kanazawa, it feels like you’re visiting traditional Japan and a bit like you’re stepping back into the past. We loved that. We cherished the break from very busy, very modern Tokyo. And we were enamored with its unique sights, the types of which we haven’t see elsewhere throughout Japan (after three trips). When we were in Kanazawa, we knew we were in a very special place. With time and reflection, it has risen to the status of one of our favorite places in the world.

In this post we share our favorite things to do in Kanazawa, restaurants we enjoyed, and transportation tips for getting from Tokyo to Kanazawa and Kanazawa to Kyoto (since that’s the route we followed). 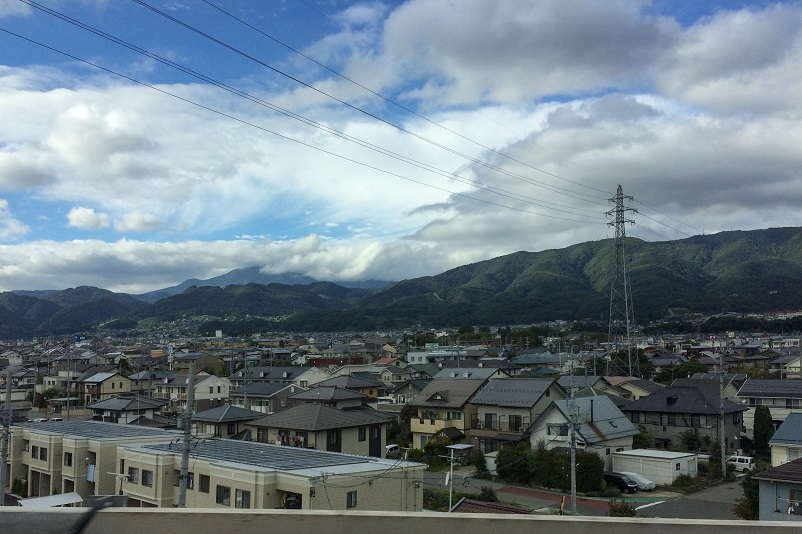 Kanazawa is a mid-sized city northwest of Tokyo. The city has always been popular with locals, but it’s gotten much more popular with foreign tourists since the Shinkansen (bullet train) route was completed in 2015. So it’s fast and direct and easy to get there from Tokyo.

In Kanazawa, you arrive at the really cool, unique looking train station. The station was completed in 2005 in advance of the coming Shinkansen. Its massive entrance is built in the shape of a torii gate with legs resembling traditional drums used in Noh theater, which flourished in Kanazawa. Entering the station you walk through an airy and modern covered plaza. (Source: KanazawaStation.com).

Kanazawa has been an important city since the Edo period when it served as the seat of the second most powerful clan after the Tokugawa. Having escaped air-raid destruction during WWII, Kanazawa has very well-preserved historic attractions including one of the most beautiful gardens in the country, a lovely castle, and districts that were home to samurai and geishas. (Source: Japan-Guide.) 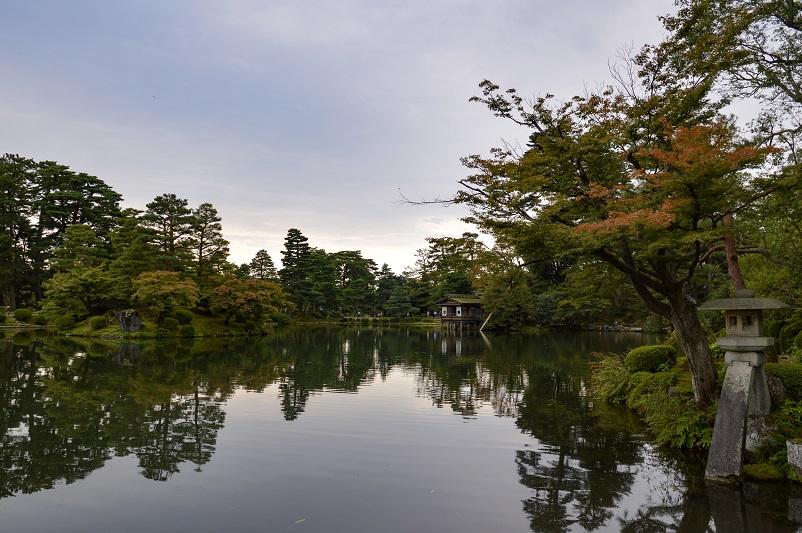 The crown jewel of Kanazawa attractions is the stunningly beautiful and serene Kenroku-en Garden. It was originally created in the 1600s, burned and destroyed during a great fire in the 1700s, and rebuilt in the 1800s. It’s one of the three great gardens of Japan, which means it incorporates specific attributes of Japan gardening theory.

Kenroku-en Garden is stunning. Even the rain didn’t stop us from admiring its beauty. Due to the variety of trees planted, it has a different look during each season. We visited during October when the colors were just starting to turn. 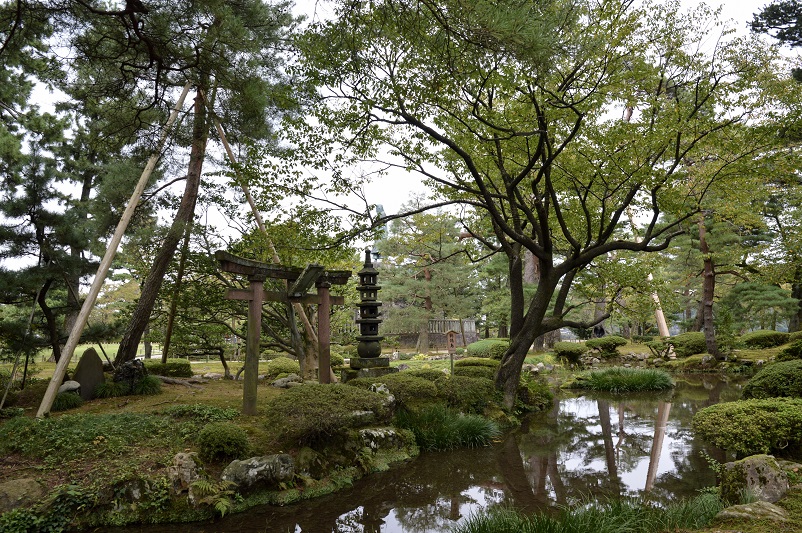 Even though there were plenty of visitors during our time there, it was still possible to find quiet spots and enjoy the serenity of the place.

In terms of accessibility, it was fairly flat, although getting there requires climbing a bit of a hill and there are some stairs within the garden. 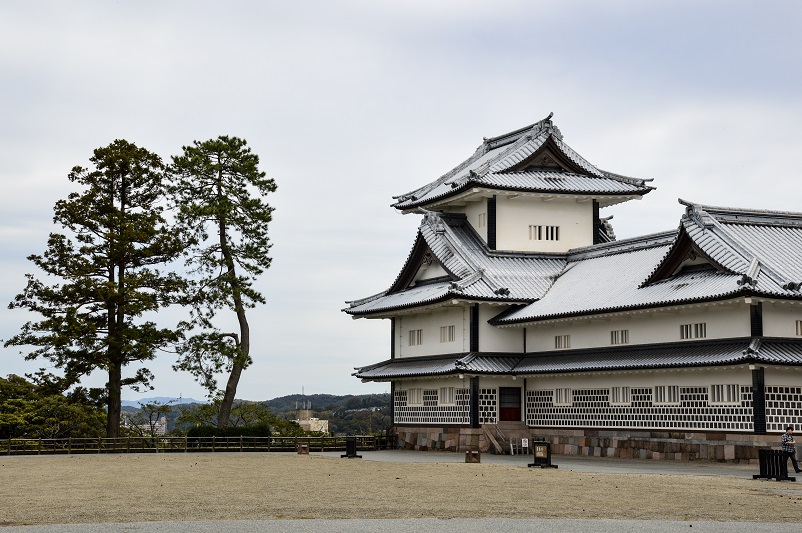 Kenroku-en was originally the outer garden of Kanazawa Castle. So you should consider combining your visits to both. Not only are they located right next to each other, but you can save a little money by buying a combination ticket to both attractions. You can explore the Kanazawa Castle Park and the castle grounds for free, but must pay a fee to enter the storehouse. 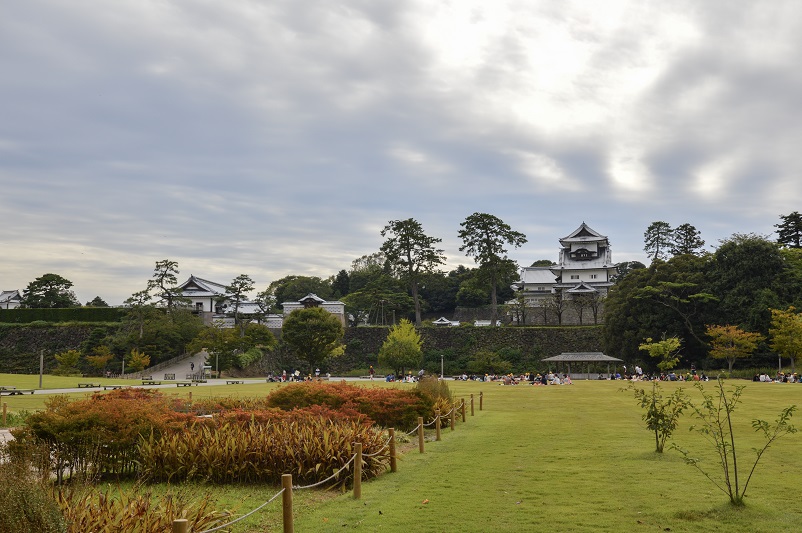 The buildings and gates that make up Kanazawa Castle were originally built in the 1500s. Through its history, the castle was destroyed and rebuilt numerous times, most recently in 2001. The storehouse, connected to a watch tower, is the castle’s largest building, and it is quite long. Inside you can learn about construction techniques and see how the building was used. 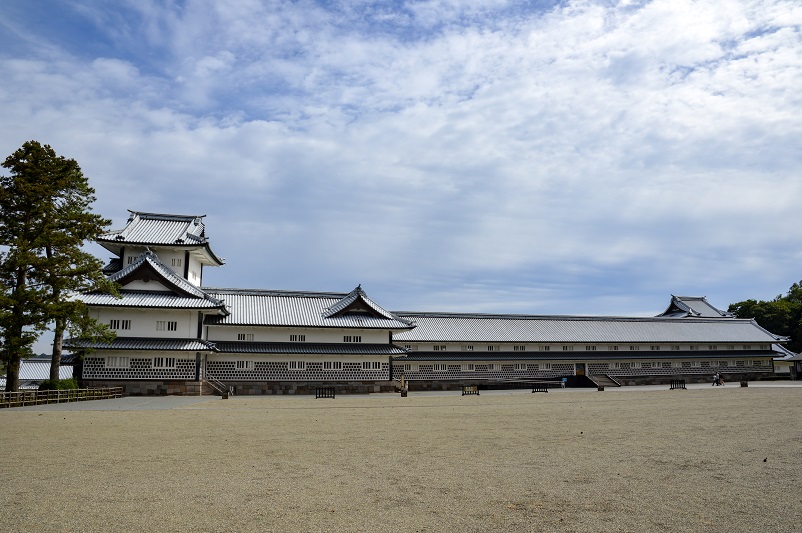 A beautiful must-see spot in the the Kanazawa Castle Park complex is Gyokusen’inmaru Garden. It’s much smaller than Kenroku-en, but just as magical. And, bonus, it’s free! Although we would have happily paid to enter (and that’s saying a lot for us). 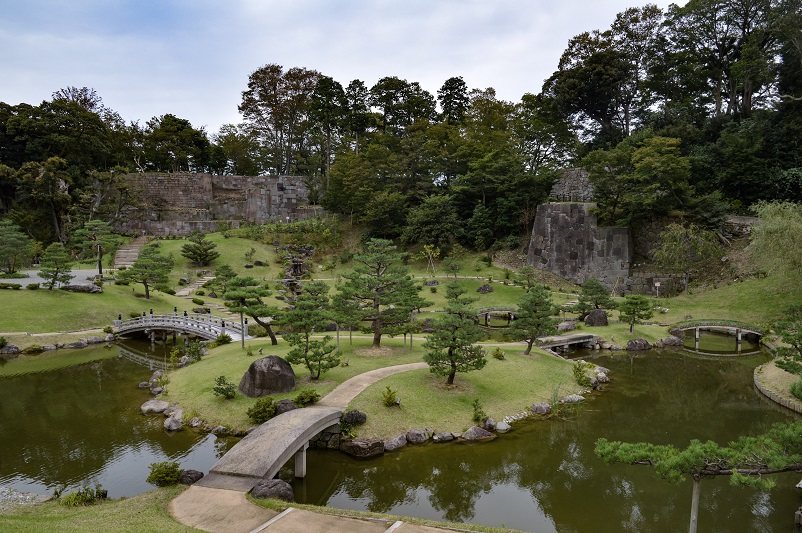 Unlike Kenroku-en, there were hardly any people in the garden when we visited. It was not only beautiful, but we truly felt calm and grateful while visiting. It’s definitely more a place for quiet contemplation and appreciation of nature. And we sat and did just that. 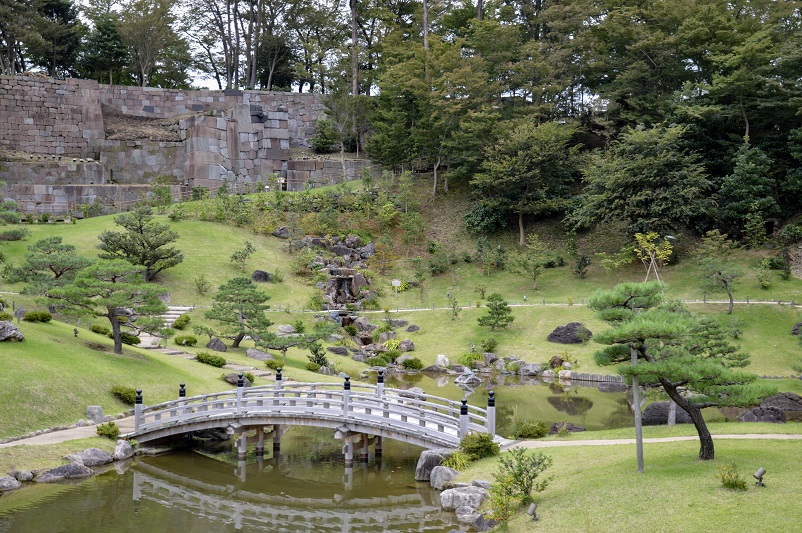 As with any Japanese city, there are countless shrines and temples in Kanazawa. We particularly enjoyed visiting the large Oyama Shrine, which was across the street from the entrance to Gyokusen’inmaru Garden.

More great things to do in Kanazawa

When you step into Kanazawa’s historic districts and onto narrow streets with wooden buildings (which result in an amazing scent pervading the air) you can imagine what it must have been like to live in Japan centuries ago. 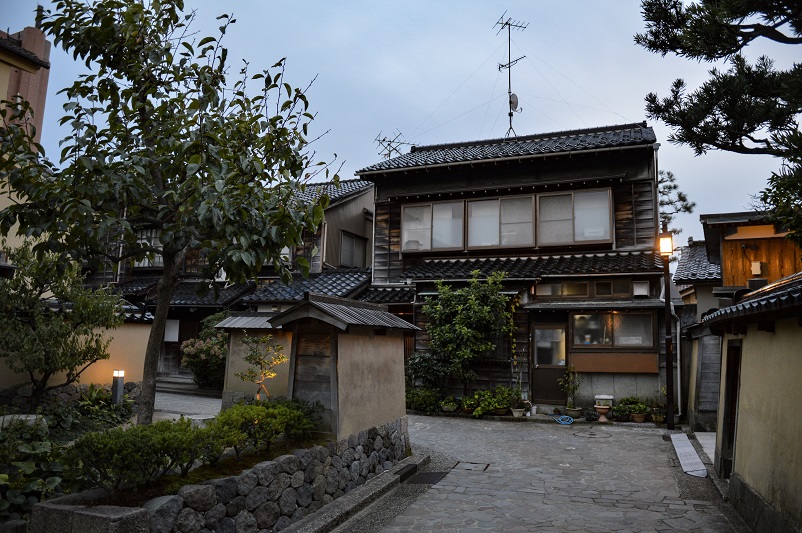 One of the more unique things to do in Kanazawa is visit its samurai district. It consists of a combination of restored and well-preserved wooden buildings beneath the castle, where samurai and their families lived. 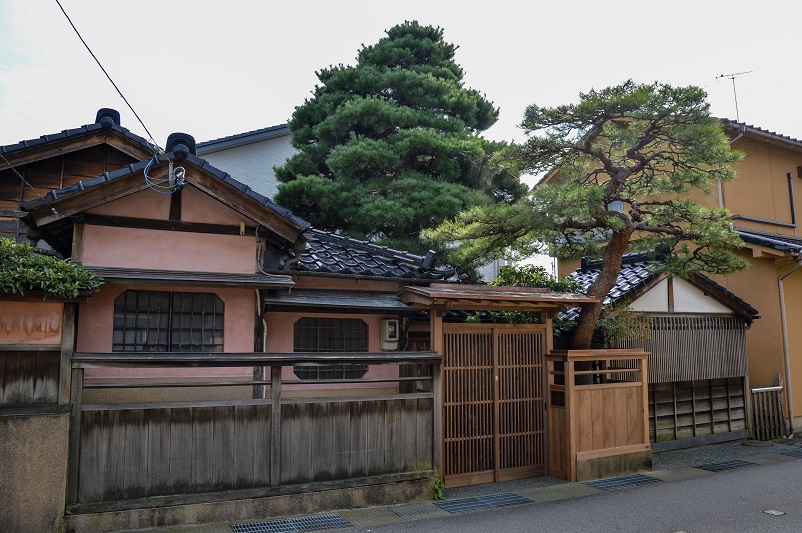 There are still geisha living and working in Kanazawa. Although we’re pretty sure most of the women in kimonos we saw in Kanazawa had rented them for photo ops. 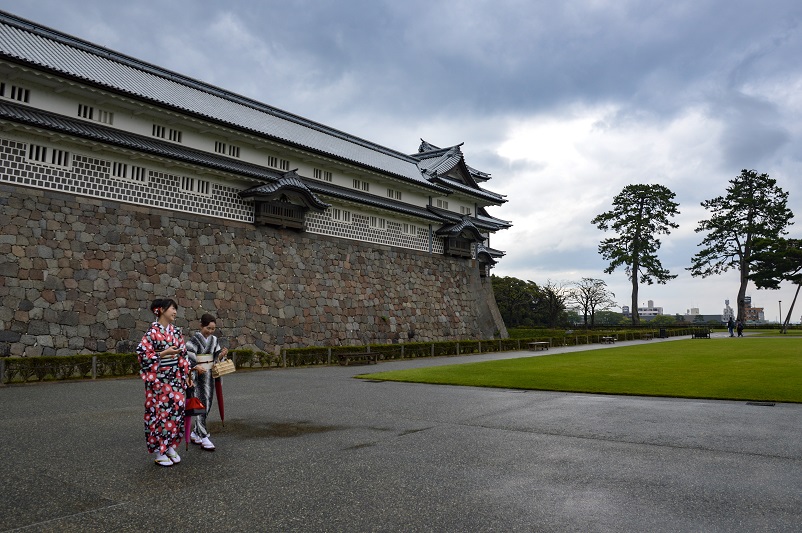 Kanazawa has three geisha districts, but the most popular is Higashiyama Higashi Chaya District, which is on the northeast side of the Asano River. We learned that it has one of the most photographed streets in Japan, so we’re sure it’s even busier these days than it was a few years ago when we visited. Though it’s a lovely place to stroll around during the day, we especially enjoyed wandering through the atmospheric streets during the evening.

Stroll along the Asano River 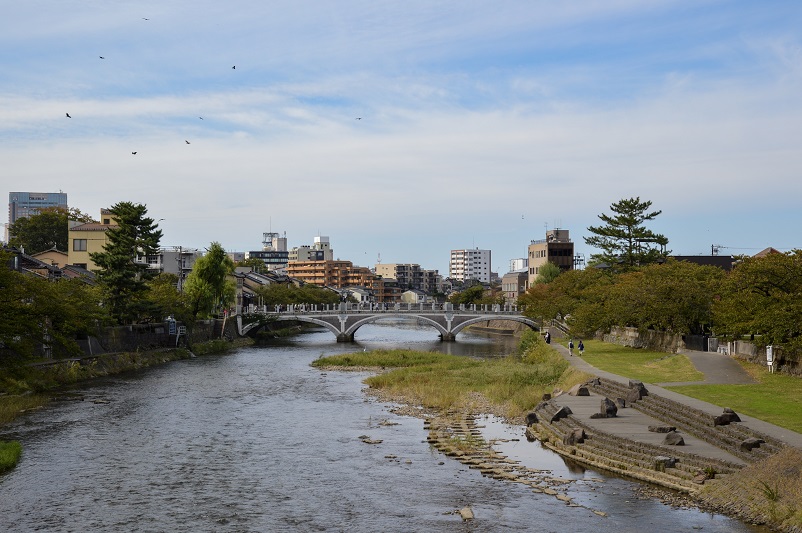 This area of the city is right near the Asano (or Asanogawa) River. One can walk along the river, which is quite peaceful and relaxing and offers a completely different view of the city. There are several bridges to crisscross and a lot of birds (or there were when we visited). 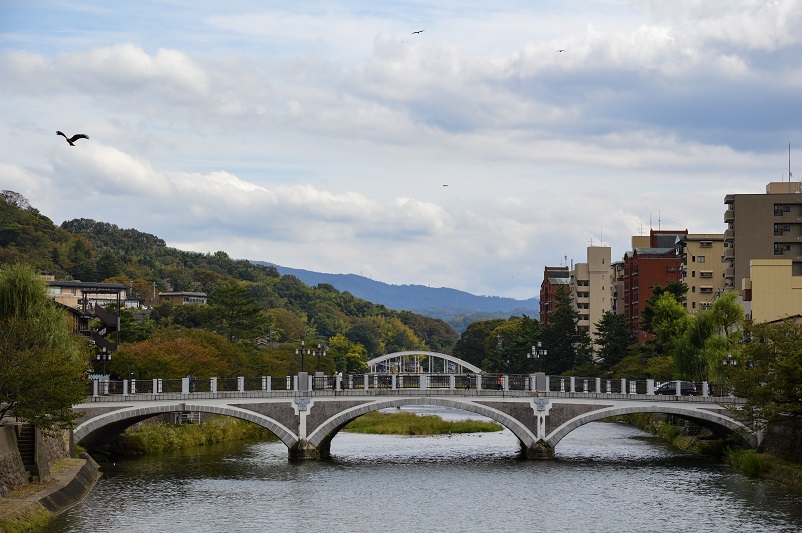 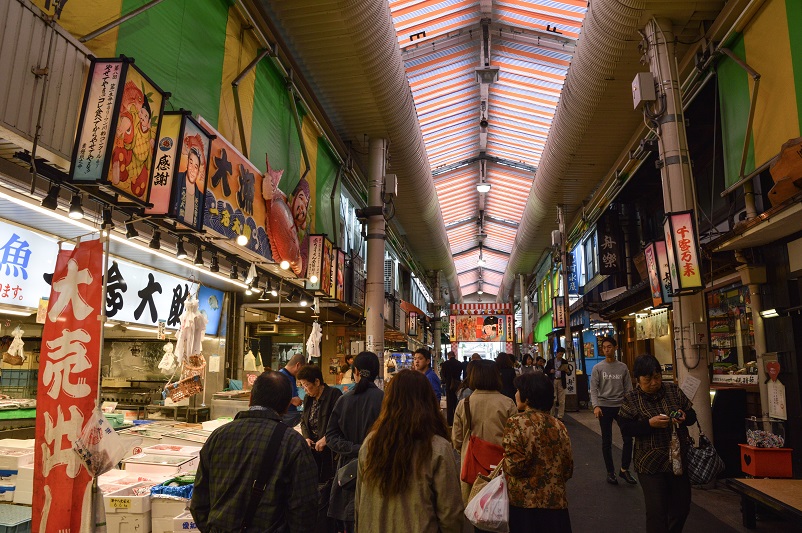 Given its position near the Sea of Japan, Kanazawa is famous for its seafood and its fish market, Omicho Market. Our hotel was right next door, so we had the pleasure of walking through the market several times a day. We never tired of the bustling activity, sights, and smells (seriously!). One morning we happened to stroll by during an auction for three enormous fish. Locals and tourists alike were enthralled.

Kanazawa sushi can’t be beat. If you’re looking for what to eat in Kanazawa, start there. Here are some places we enjoyed that are worth checking out. 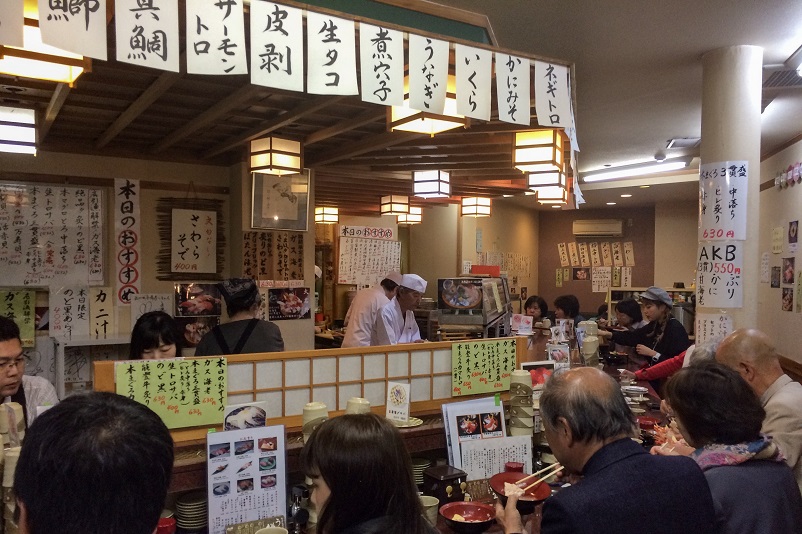 We ate our best sushi in Kanazawa at a small spot in the fish market called 近江町市場寿し that seemed to be enjoyed by locals. Even though it was a kaiten zushi (conveyor belt sushi) restaurant, you mainly placed orders with the servers. It was delicious and amazing to think the sushi was being made from the freshest fish in the city.

They have an English menu, but you have to ask for it. You will likely have to wait in line, especially during standard lunch time, but it’s worth the wait. 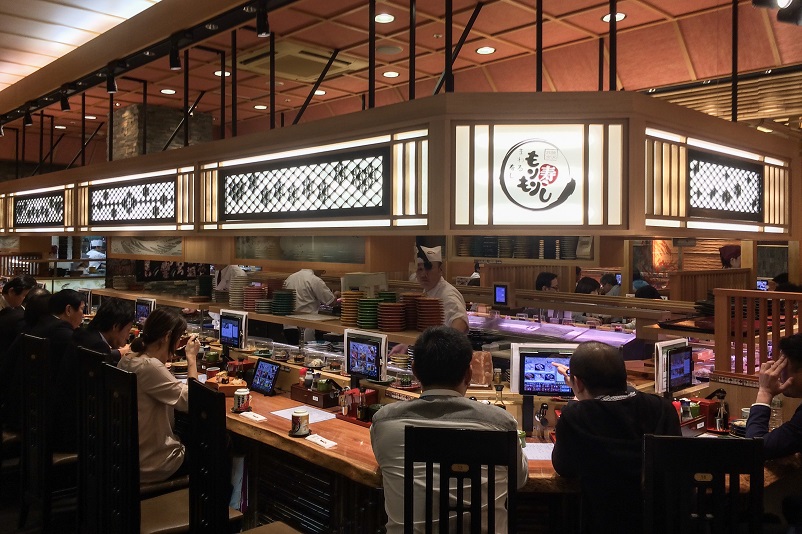 We can also recommend a more modern, and somewhat more tourist-friendly conveyor belt sushi restaurant: Mori-Mori. This chain has a few outposts in the city, including one at the fish market. We ate at the one in Kanazawa station before we departed for Kyoto.

You can order specific dishes via an iPad (with an English option) or just take what you want off the conveyor belt. If you use the iPad, you might be delighted by your sushi order whisking toward you on a Shinkansen train. 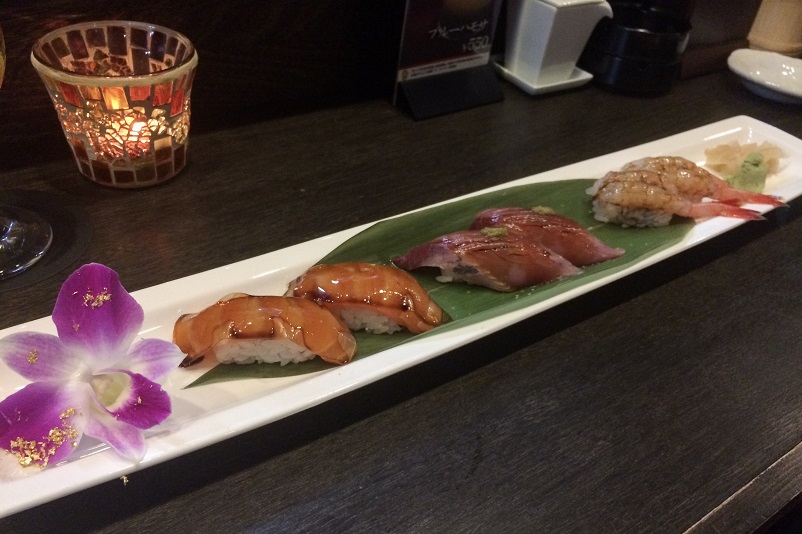 We had a delicious dinner at a nicer restaurant called Elbow Room. It specialized in sushi and yakitori. The chef/owner spent many years in California before moving back to his hometown of Kanazawa. The sushi he made was beautifully plated and really delicious. Kanazawa is also known for its gold leaf and he decorated our plates with flowers covered in the stuff. Our favorite was the spicy tuna roll. We haven’t seen it anywhere else in Japan, so we know it’s not traditional, but we still love it.

Post-publication update: sadly, it looks like Elbow Room has closed since we visited Kanazawa.

Our first night in Kanazawa we chickened out and dined at a place that we knew would have English menus: Jiyuken. We must say, though, that it was also described as being loved by locals and tourists alike. And we did in fact see a geisha come to get takeout. The staff was friendly and our beef bowls were tasty and incredibly satisfying after a day of travel, so we stand by our choice and can definitely recommend it. 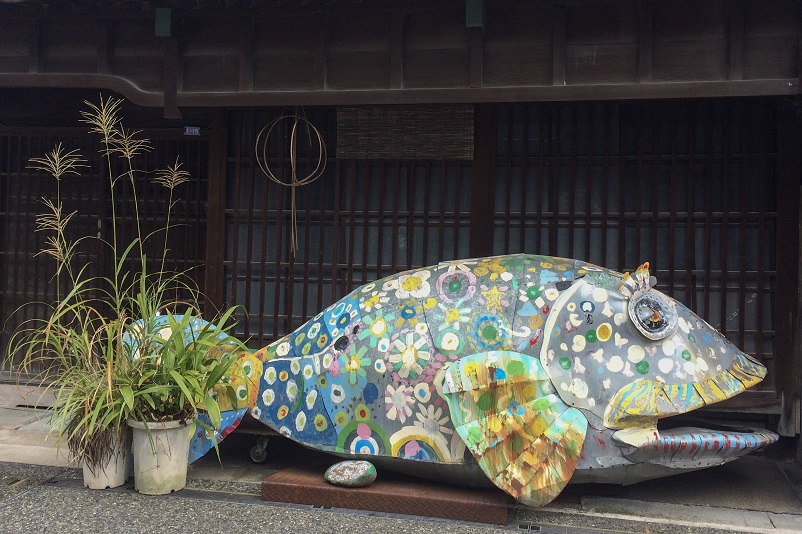 After almost two weeks in Japan, truth-be-told, Sarah was craving a sandwich. Due to all the wonderful reviews, it wasn’t hard to find Curio Espresso and Vintage Design. The small shop is run by a husband/wife couple from Seattle/Kanazawa (respectively).

Their egg sandwiches were scrumptious and perfect. As was the coffee. And the owner was so nice and chatty, recommending a bunch of lesser known places to see and go in his city. It was too bad we visited on our last day and couldn’t check them all out. Curio is located on a very cute street with a whole bunch of other shops, and the above fun fish sculpture.

Jazz Spot is a cool and cozy bar with a great whiskey selection. And (as its name implies) a lot of jazz music. Oh yeah, and there’s also this amazingly gorgeous tree outside the bar, so it’s almost worth going just for that. If you go before 8pm you don’t have to pay the cover charge, but you also might be the only one in the place.

Oriental Brewing is a craft brewery that opened in Kanazawa in 2016. They currently have three locations, but we visited the one near the popular Geisha street.

Where to stay in Kanazawa

We stayed at the Hotel Pacific Kanazawa. We think it was in a great location, within walking distance to everything we wanted to see and do. Our room was small (like really small), but many hotel rooms in Japan are small. So if you stay here, have the proper expectations. We should also note that the staff working at the hotel were very helpful when Justin got a toothache in Japan.

To move onto the next stop on our Japan itinerary, we traveled by train from Kanazawa to Kyoto. Though it isn’t serviced by shinkansen, it was still pretty easy and fast, taking a little over 2 hours. You can check current fares and schedules on Hyperdia.

7 thoughts on “Experience traditional Japan: Kanazawa things to do”