Last Updated on 19th March 2019 by Sarah and Justin

New Zealand is known for its breathtaking and varied scenery: rolling green hills, beaches, geothermal pools, mountains, glaciers, and of course, fjords. We really (really) love fjords. So when we were planning our New Zealand road trip itinerary, we made sure to spend enough time in the Fiordland region of New Zealand’s South Island to be able to do not one but two fjord cruises. But if you’re tight on time – or only want to get on a boat once – we’ve written this detailed comparison of Milford Sound vs Doubtful Sound so you know which fjord tour is right for you. 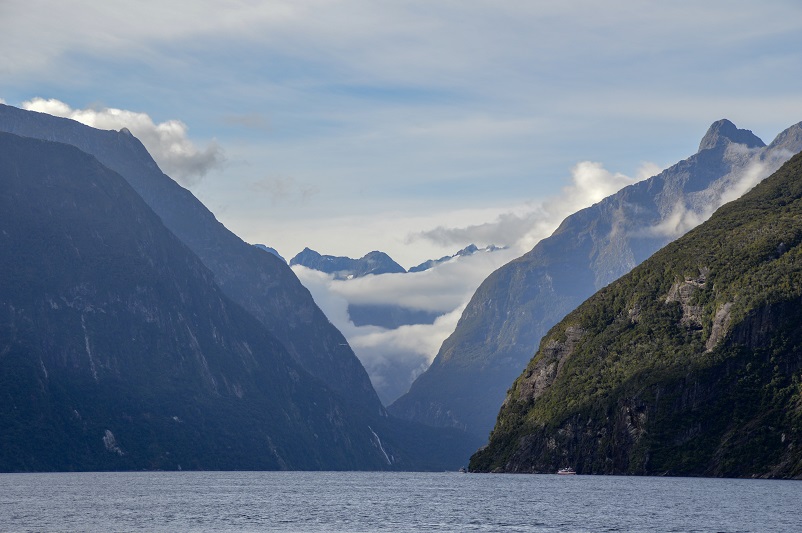 Sure, many people go to Milford Sound to see breathtaking scenery from the comfort of a boat. But a trip to Milford Sound is about more than just the cruise. The drive to get there is the definition of epic. There are more things to see and do along the way than you’ll actually have time to see and do. So do yourself a favor and give yourself as much time as possible for that drive. You’re going to want to stop to take pictures or go for a hike pretty much every ten minutes. 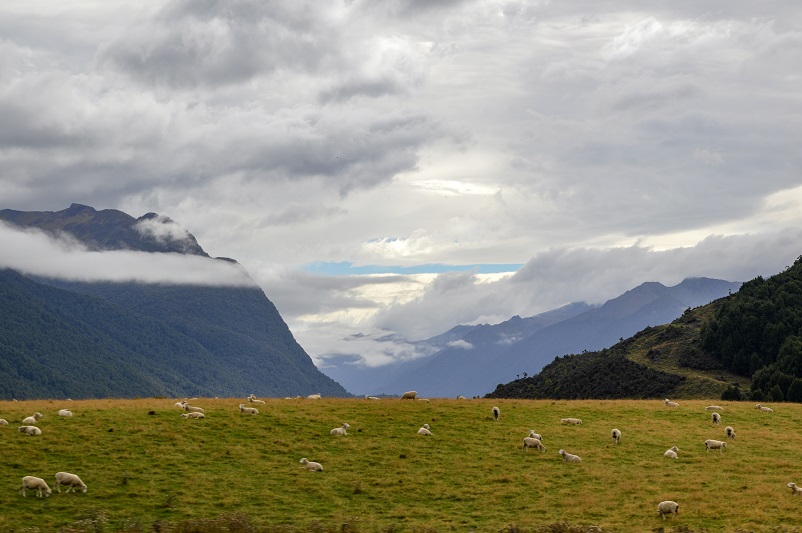 We gave ourselves a late wake up time and about half a day to drive to Milford Sound. We stopped for a few relatively easy walks to some absolutely beautiful places including the Mirror Lakes for reflections, Marian Track for waterfalls, and the Chasm for, well, a chasm. 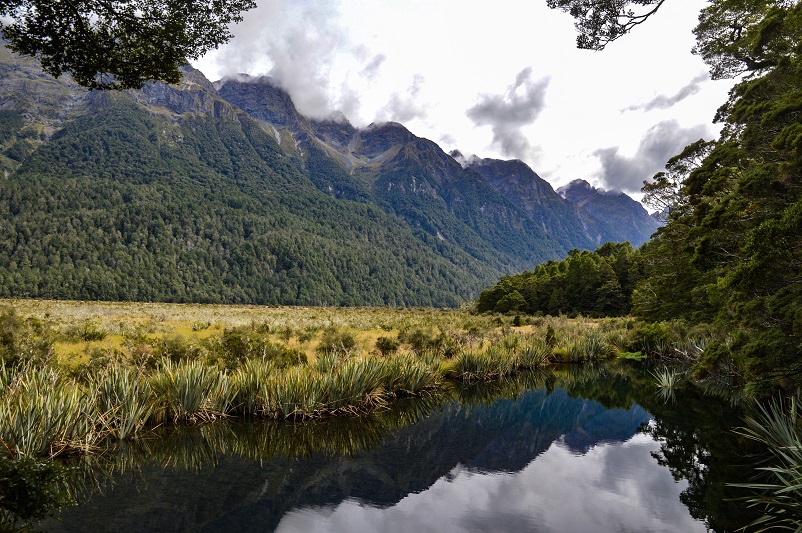 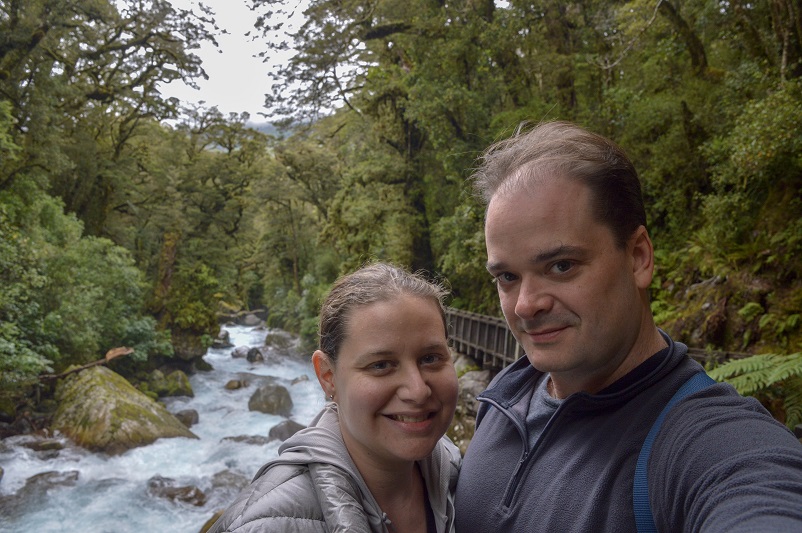 We planned much of our South Island itinerary around how and when we would get to Milford Sound. Though it’s doable as a day trip from super popular Queenstown, we decided to have a more relaxed experience by departing from Te Anau. We then spent the night at the (budget-busting) Milford Sound Lodge. You can camp there, but being that we’re not campers, we splurged on one of their cabins. It’s quite pricey, but we had a wonderful time staring out our big glass window at waterfalls and eating an incredibly delicious dinner. 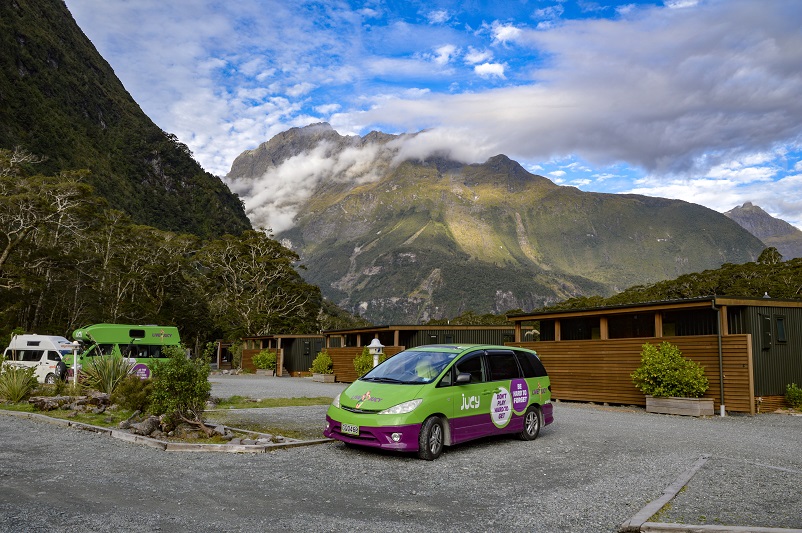 We stayed the night so we could catch an early Milford Sound cruise the next day. We drove the five minutes from the lodge to the parking lot and then walked about 15 minutes to the dock. Our cruise was at 9am. We booked with Go Orange because they were the cheapest cruise and offered free breakfast. We had read that all Milford Sound cruises took essentially the same route, so felt comfortable making our choice based on price.

Our Milford Sound cruise was about two hours long, but those hours flew by. It was truly majestic.

We saw the most gorgeous views of waterfalls, mountains, glaciers on mountains, small sightseeing planes maneuvering around mountains, and dolphins. 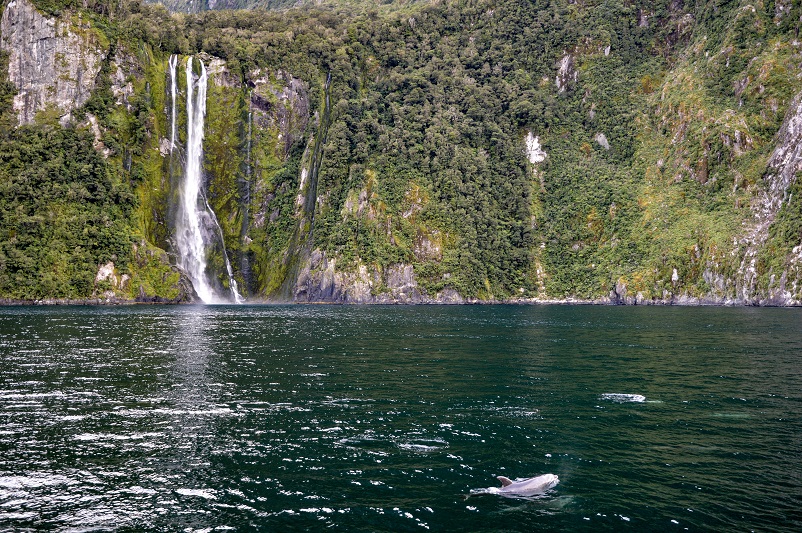 So many dolphins! We got incredibly lucky the day we went out and saw not just normal beautiful adult dolphins, but baby dolphins too! Even the crew of the ship was going crazy about how many dolphins were swimming around us. It was just amazing. 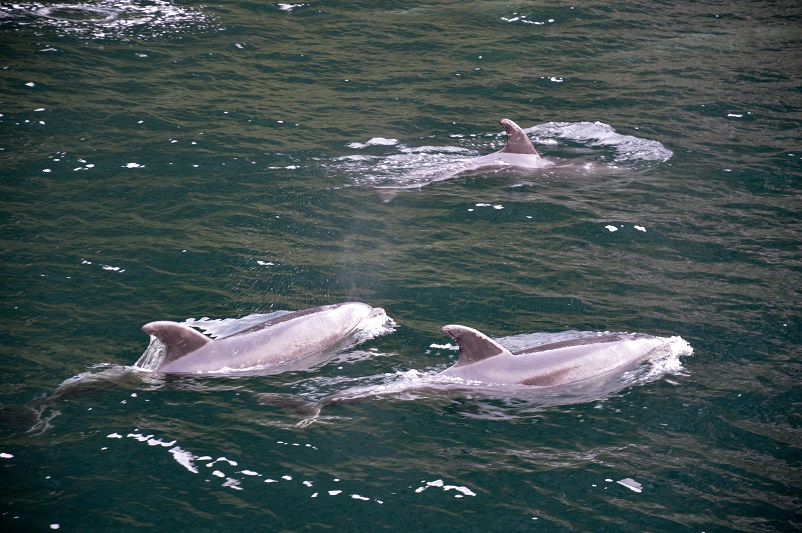 And after the cruise was over – back on land – we still couldn’t get enough of the view. We slowly made our way back to our car taking it all in and then enjoyed another incredible drive along that famous road back to Te Anau. 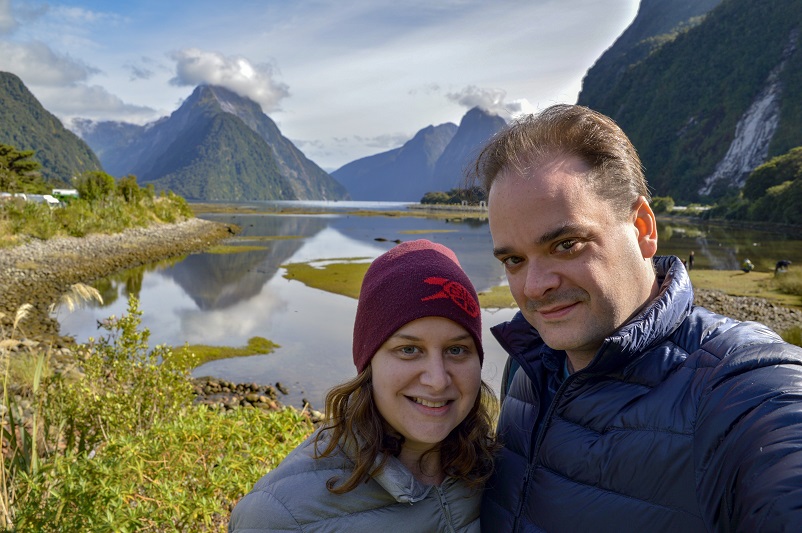 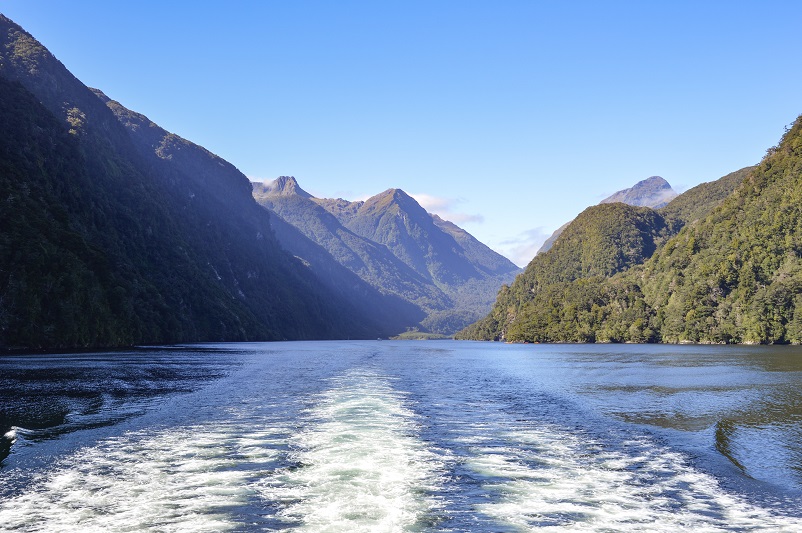 A Doubtful Sound cruise is also a full-day affair of driving and cruising. Since we were on a massive month-long New Zealand road trip – with Justin as the only driver – we took the opportunity to not drive on this particular day. We once again chose Go Orange for this fjord cruise as they offered offered free transportation to/from our hotel in Te Anau. We were picked up at our accommodation in Te Anau, which was about 40 minutes away from where the actual adventure started. Although of course the drive there was beautiful. You’re on the South Island of New Zealand! Upon de-bussing, we boarded a ferry to take us across the stunning Lake Manapouri. We stood on the top deck of the boat, breathing in the crisp air, watching hills and islands pass us by. 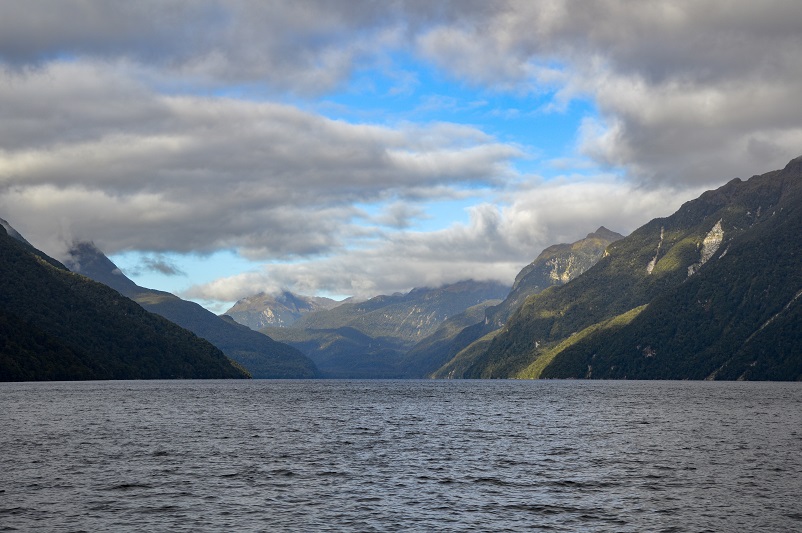 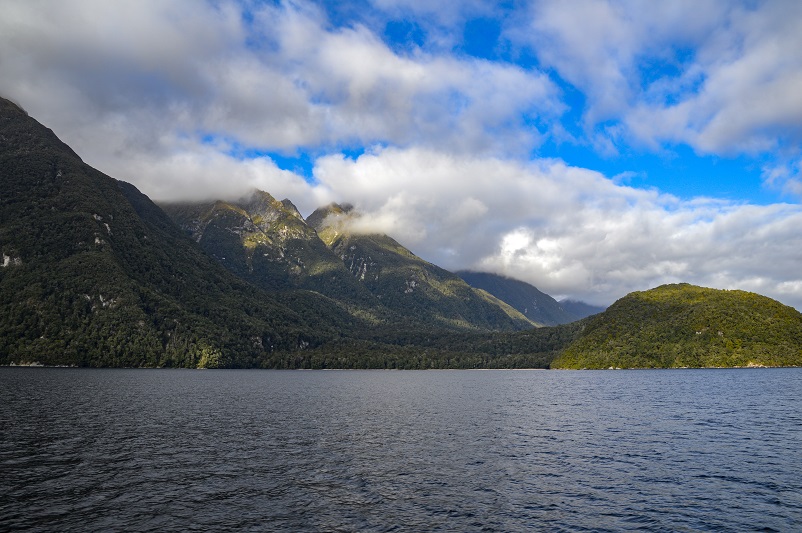 We then got back on a (different) bus and were taken on a crazy ride through the Southern Alps via the Wilmot Pass. It has a road with one of the steepest inclines in New Zealand and was honestly a bit harrowing. Luckily our driver was a pro! We stopped a few times to take in the magnificent views. And soon we could see Doubtful Sound from above. 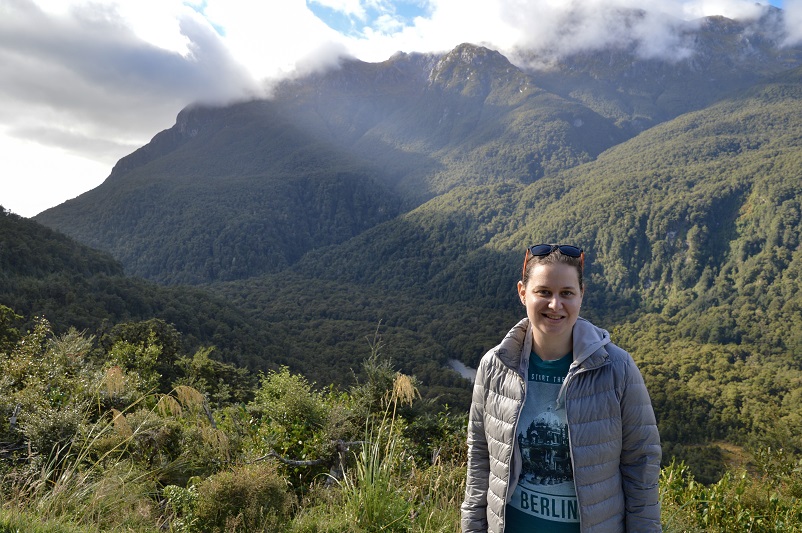 When we arrived at the water, we got on another (smaller) boat and took off on the actual Doubtful Sound cruise. It lasted about three hours and was indeed the highlight of the day. It was mostly a pretty calm journey – as we passed by rocky cliffs and waterfalls – but as we approached the Tasman Sea, things got pretty choppy (and fun!). Most everyone was on the outside of the boat, hanging onto the rails, while the wind and water whipped at our faces. We saw New Zealand fur seals playing on the rocks and royal albatross soaring through the sky. And on the way back in we saw more dolphins. 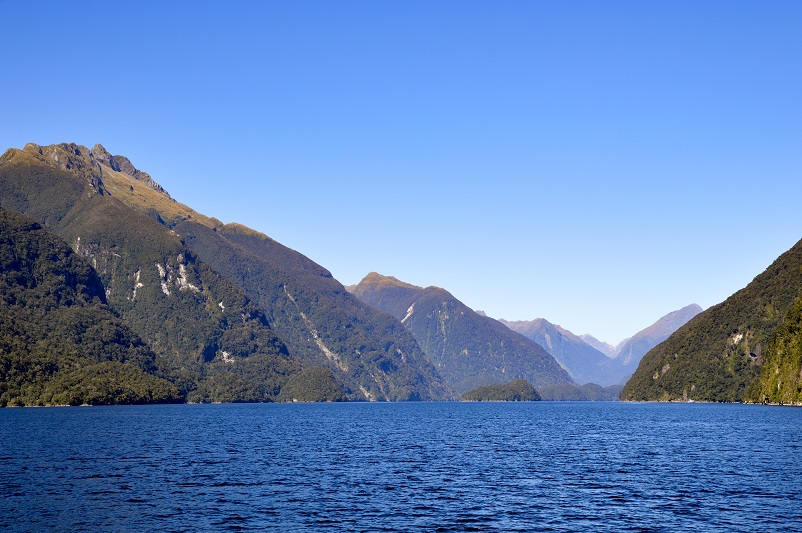 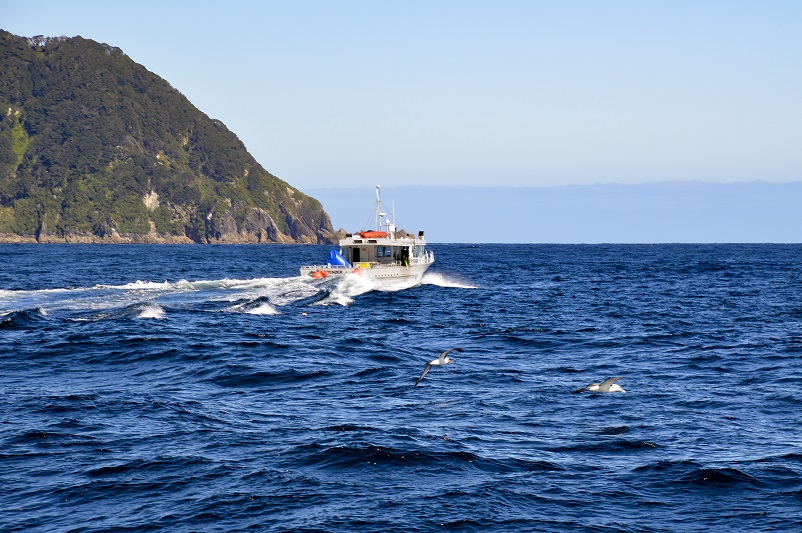 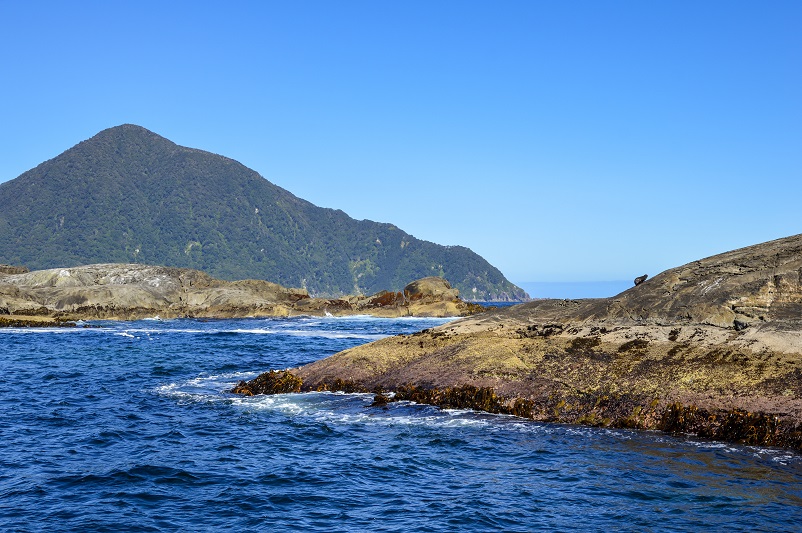 The whole thing should really be called Fiordland adventure or something because every part of the day was incredible. Even retracing our steps back to Te Anau by bus and boat and bus again was fun. It’s a long day, though. And some people choose to do the whole thing as an overnight trip.

The winner: which fjord cruise to choose 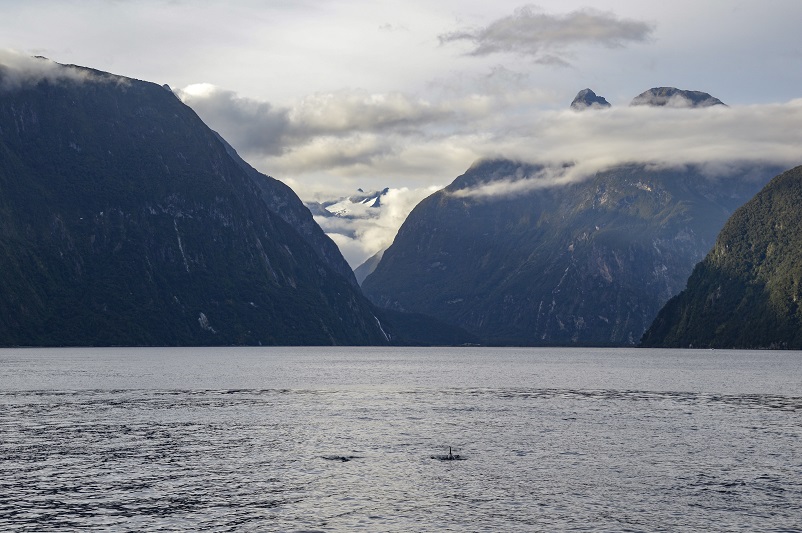 Why are we recommending the Milford Sound cruise? The drive there is itself bucket-list worthy. You see so much and get more bang for your buck with a cruise that, though relatively quick, will definitely blow your mind.

The perfect Fiordland base: Te Anau

We were really happy with our choice to use Te Anau as a base for most of our time in Fiordland. It’s a bit touristy, but it was perfect for us location-wise. We ended up spending three nights total at the Kiwi Holiday Park, with one night at Milford Sound Lodge in the middle. Kiwi Holiday Park has a host of different accommodation options. We chose private rooms with all the necessary furnishings. They had a shared kitchen and you could purchase a box of cooking supplies as well. One night, we brought food back from the big supermarket in town, but also had two nicer dinners out. Since it’s such a big tourist-base, it has many different types of restaurants. We got beers at The Fat Duck, ate pizza at La Toscana, and pub food at The Ranch.

Search availability of Kiwi Holiday Park or other accommodations in Te Anau now!

Right outside Te Anau, there’s also an alpaca farm. We stopped at it on the way back from Milford Sound to take pictures and laugh at their silly, silly faces. 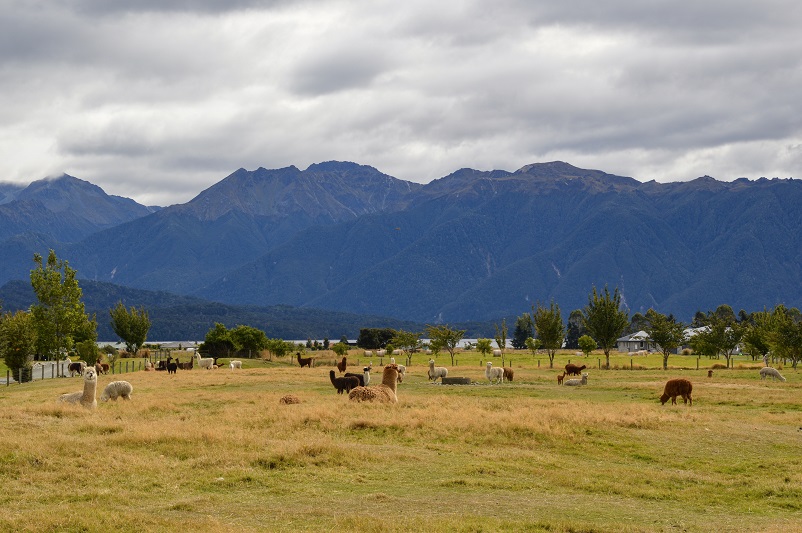 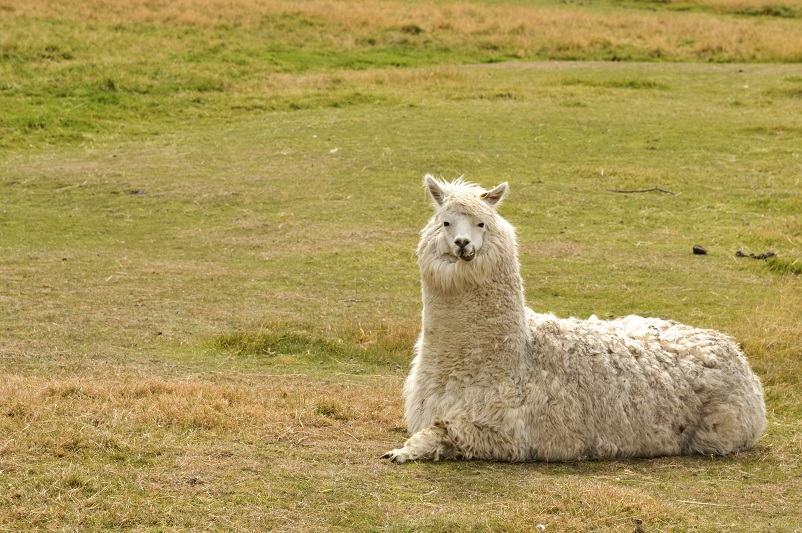 Even though this post was about choosing, as should be evident by our glowing reviews and (we think) pretty nice pictures, both fjord cruises were amazing. Our time in Fiordland was unforgettable and we wouldn’t have done anything differently.

<<Next on our New Zealand road trip: we started making our way north, stopping at Arrowtown, Wanaka, and Twizel >>