After spending one month in Rotterdam, we jetted off (via a quick and easy train ride) to spend the weekend in Antwerp, Belgium. Antwerp has it all: beautiful buildings and squares, great museums, delicious restaurants, and – like any good city in Belgium – cool places to get the best beer. This was our second visit to the city, and think we got a good feel for the place. Of course, there’s always more to explore, but we’re confident we’ve put together at least a good starter guide of what to do in Antwerp.

A little about Antwerp

Antwerp is in the Flanders region of Belgium. Being up North in the country, it’s quite close to the Netherlands. Dutch is the main language, though French is acceptable. Being the second largest city in Belgium (after Brussels), there are a lot of things to do in Antwerp. Luckily, a lot of the attractions are central, and the main tourist areas are pretty awesome.

You’ll most likely arrive in Antwerp by train. Good thing Antwerpen-Centraal (Antwerp Central Train Station) is the most beautiful train station in Europe (at least, we think so!). And if you visit in the winter, there’s even a skating rink under the festive Christmas tree. 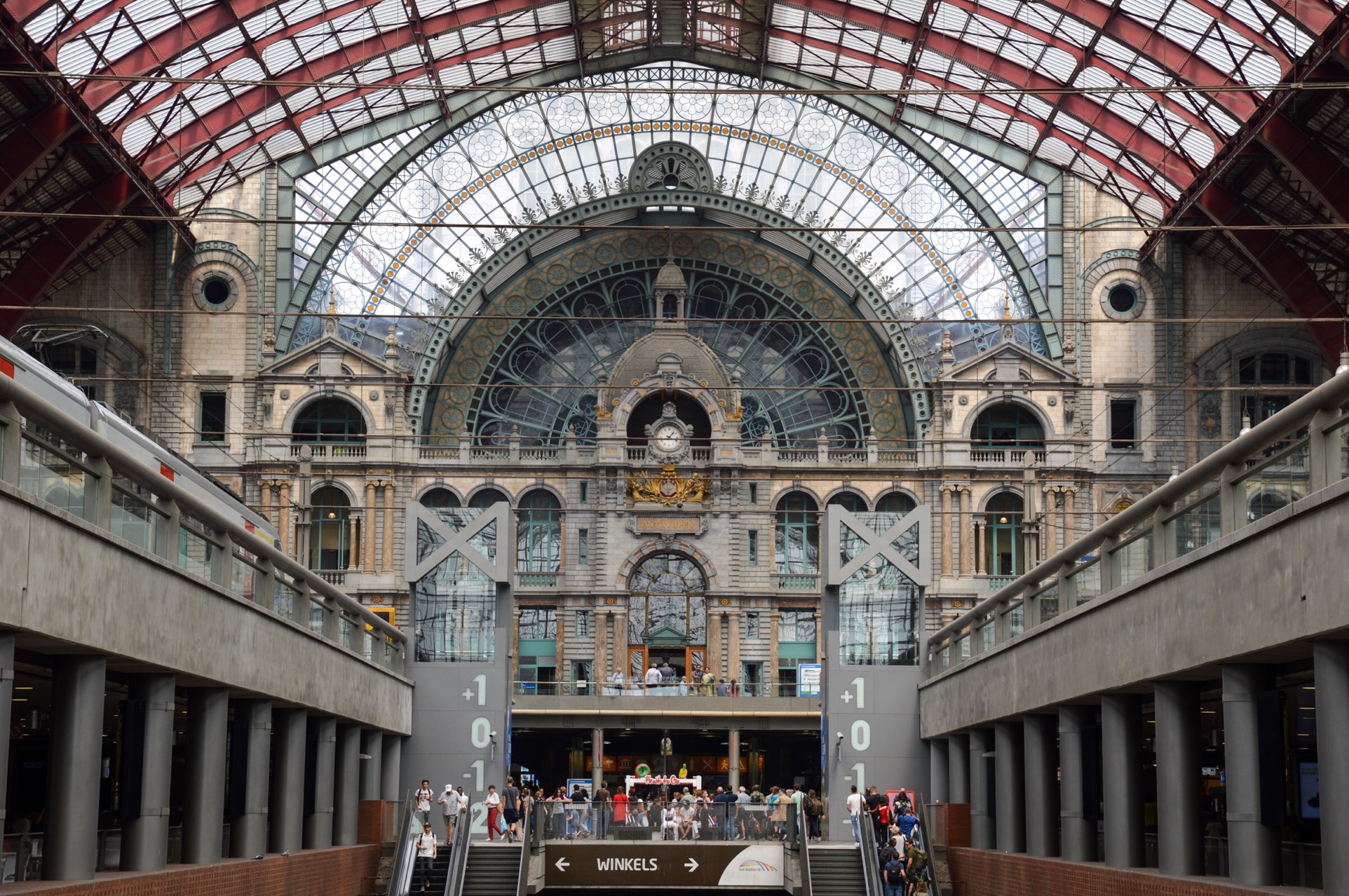 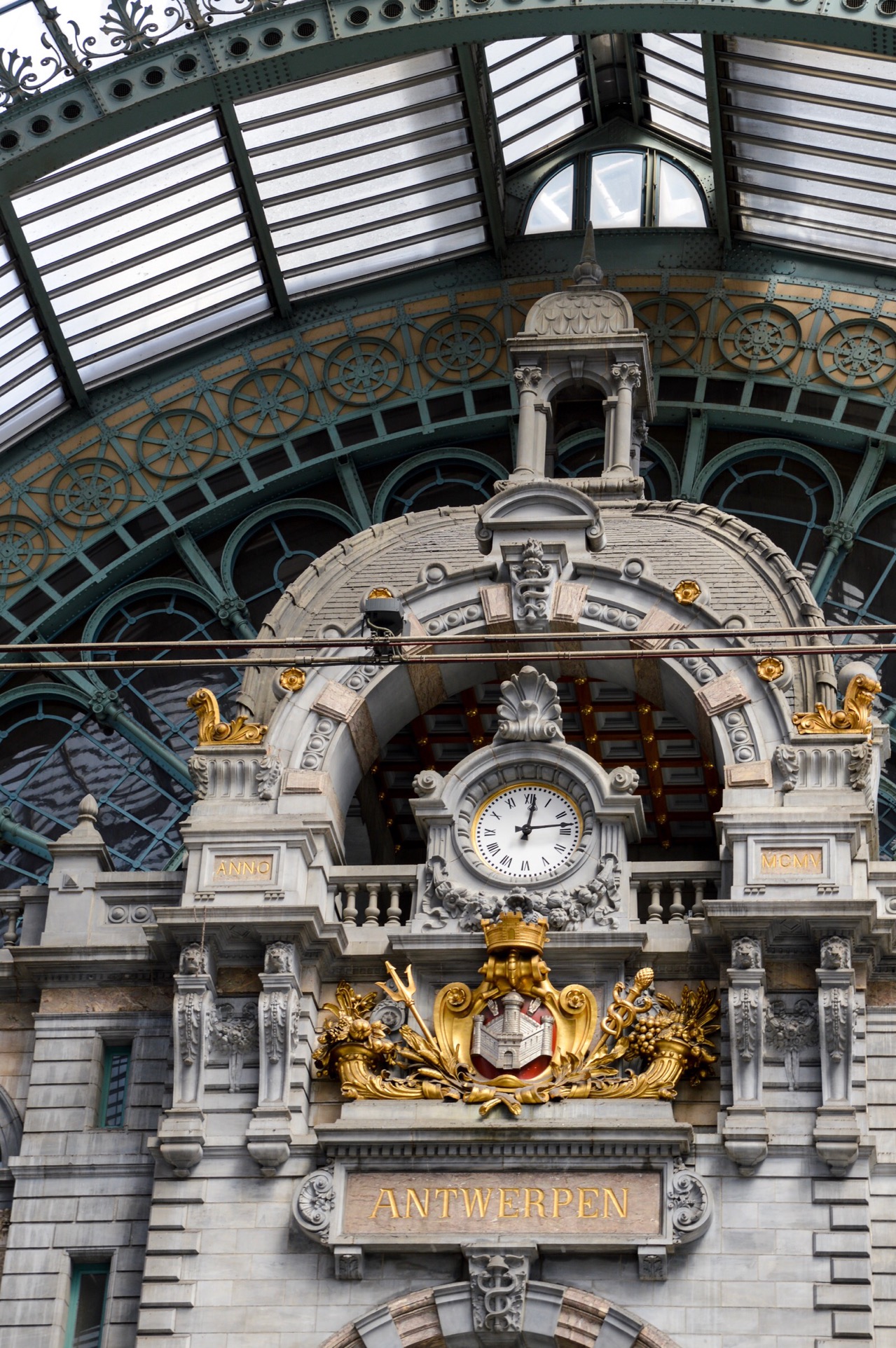 Marvel at the beautiful Grote Markt

The most famous square in Antwerp is the Grote Markt. In typical Belgian style, it’s flanked on all sides by ornately decorated buildings. Many of them represent the guilds of the city. 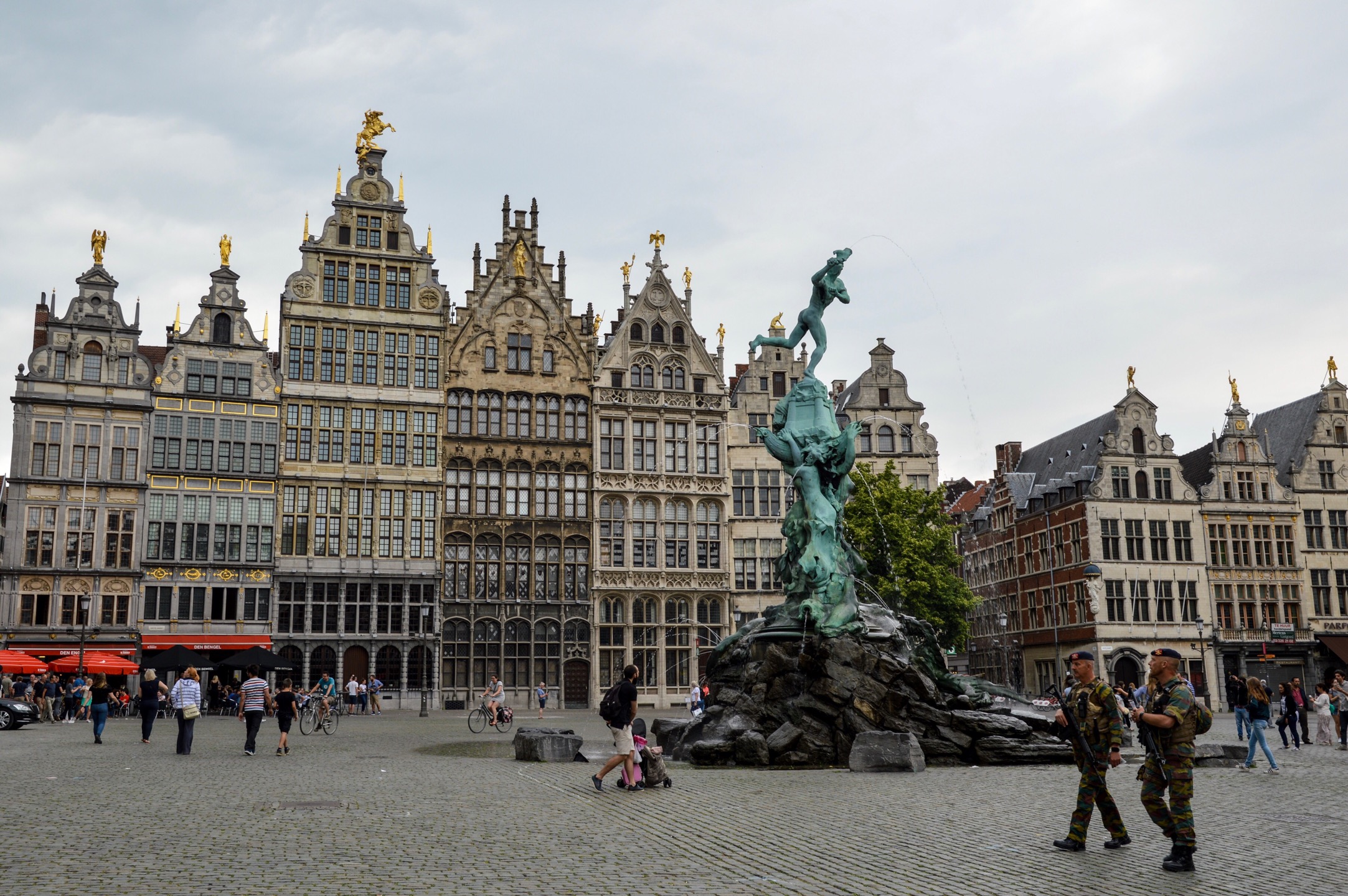 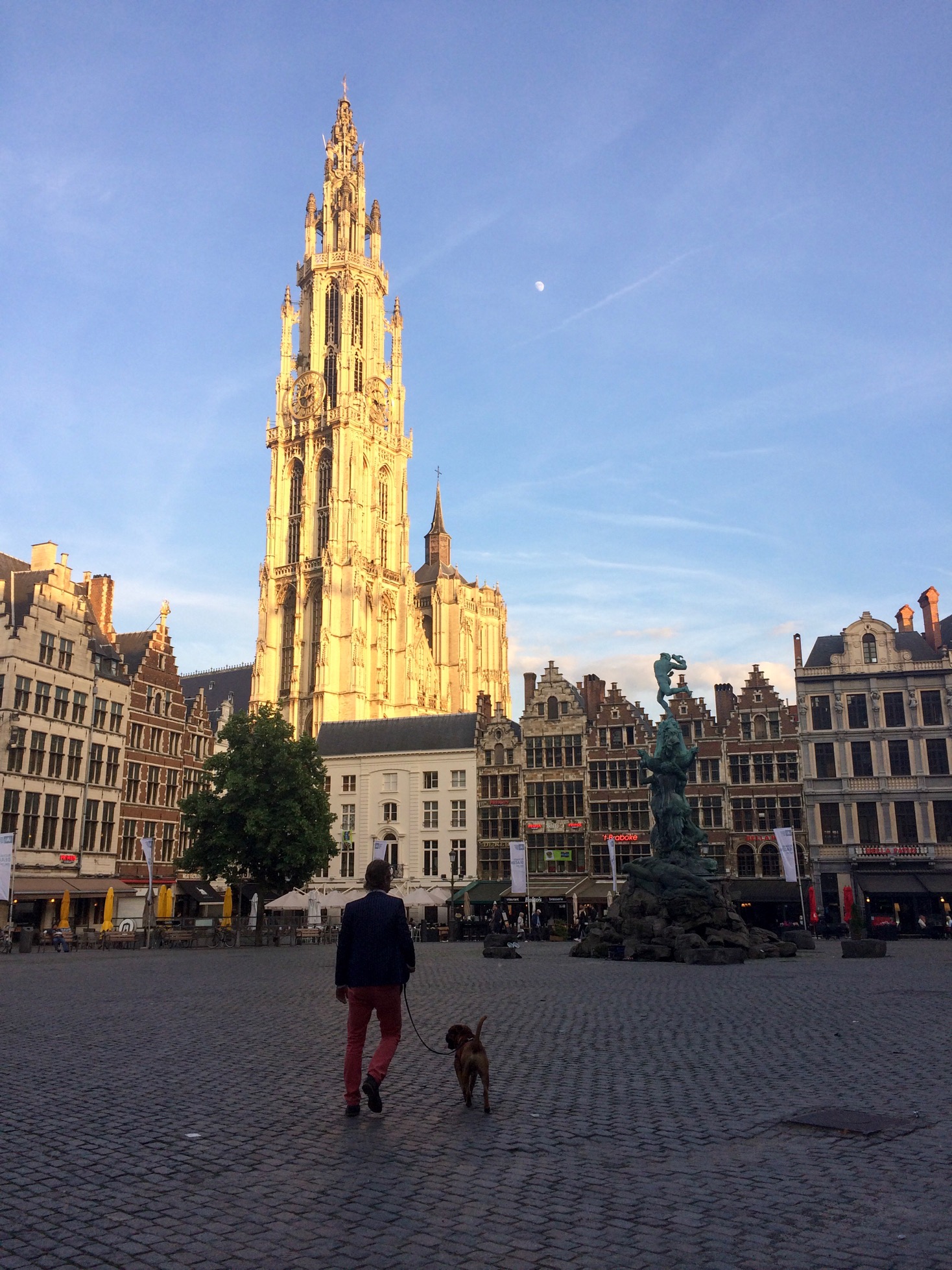 The largest building in the Grote Markt is the Stadthuis, or City Hall. The building is covered in flags, which makes for a pretty cool scene and is a great place to test your flag knowledge (or is that something only we do?). 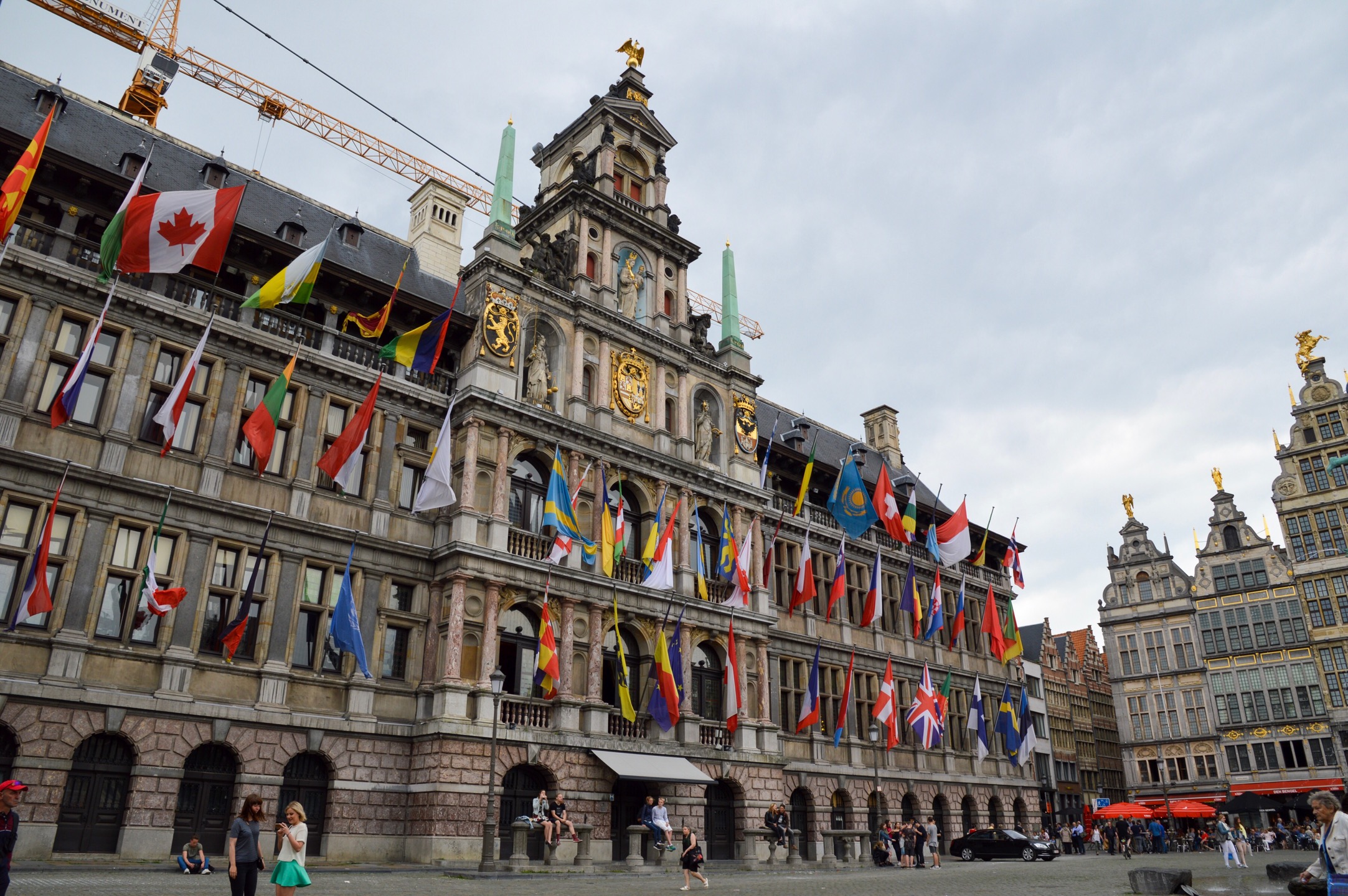 And in the middle, is a fountain with a sculpture of a mythical Roman soldier, Brabo. According to legend, Brabo defeated a giant who was tormenting the citizens of the city. He cut off the giant’s hand and threw it into the river. The city was thus named after this act of hand throwing – “hand werpen” – according to legend. 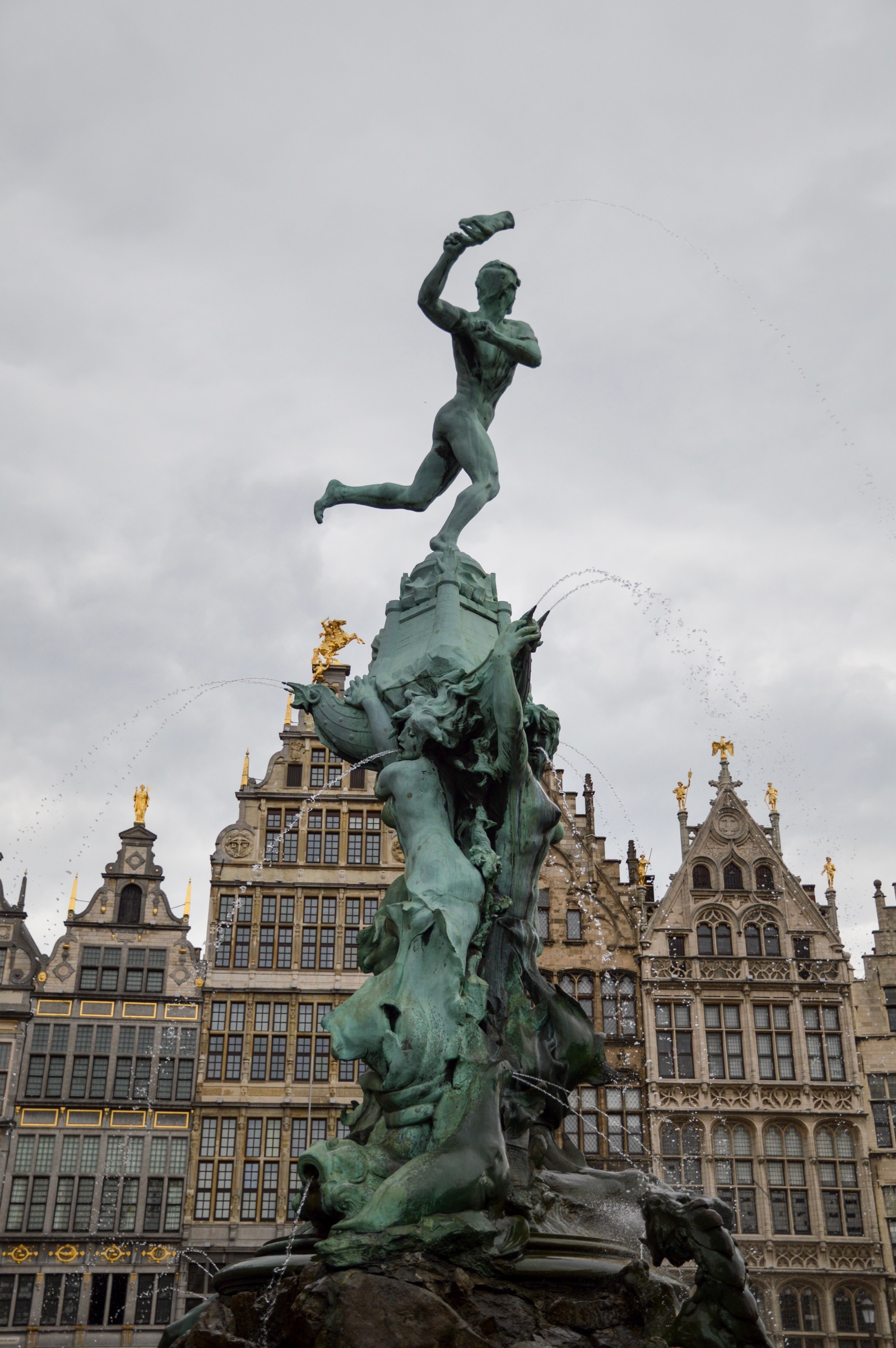 Visit the Cathedral of Our Lady

The church just off the Grote Markt – Cathedral of Our Lady – is a beautiful, grand European cathedral. You’ll can see it basking in the gorgeous afternoon light in the photo above. The inside is beautiful as well. 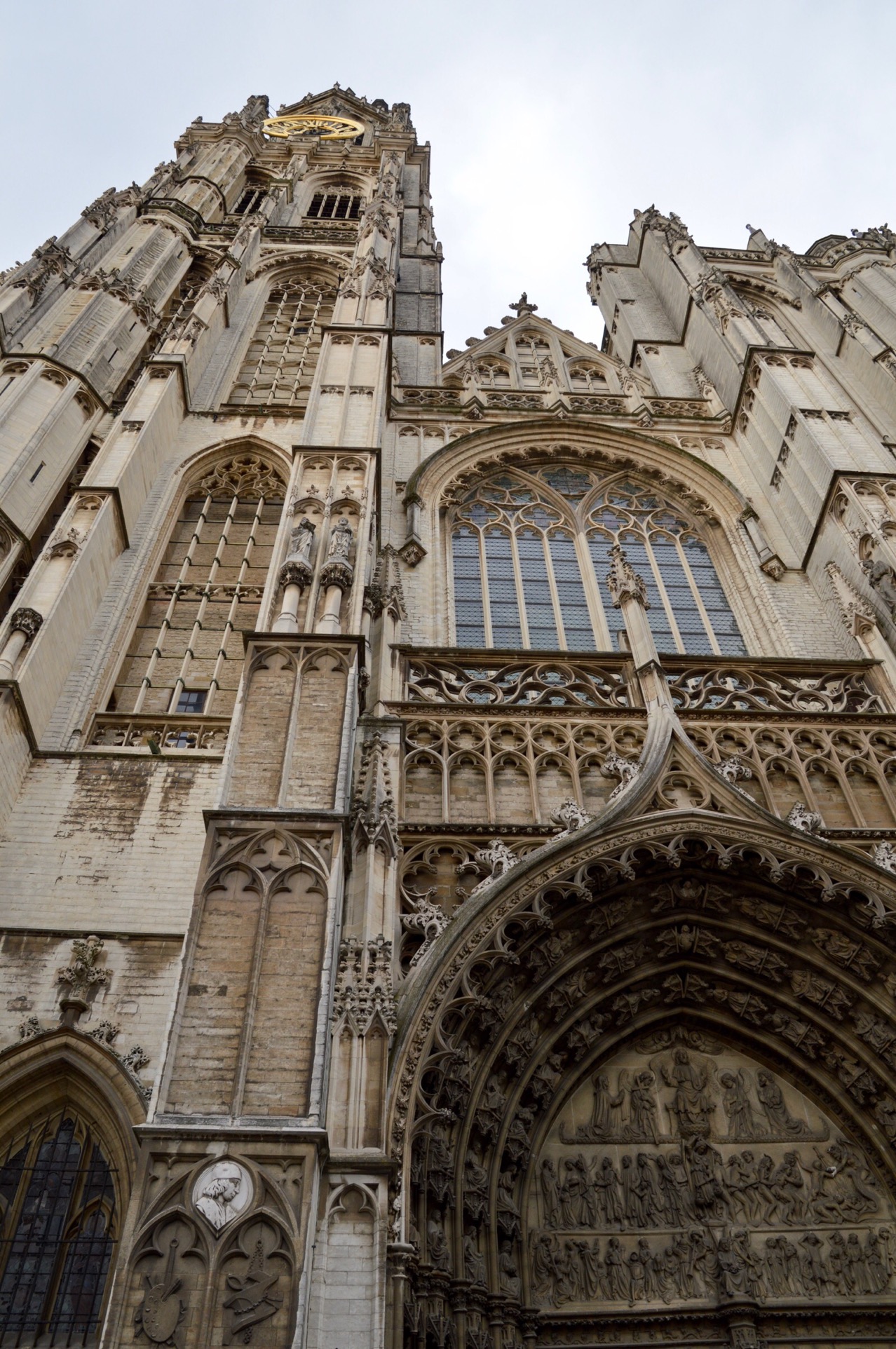 On the corners of many buildings in Antwerp are statues of the Madonna. Apparently this has something to do with taxes (or so we read), but whatever the reason, they add character to the city and make for some fun Madonna spotting. 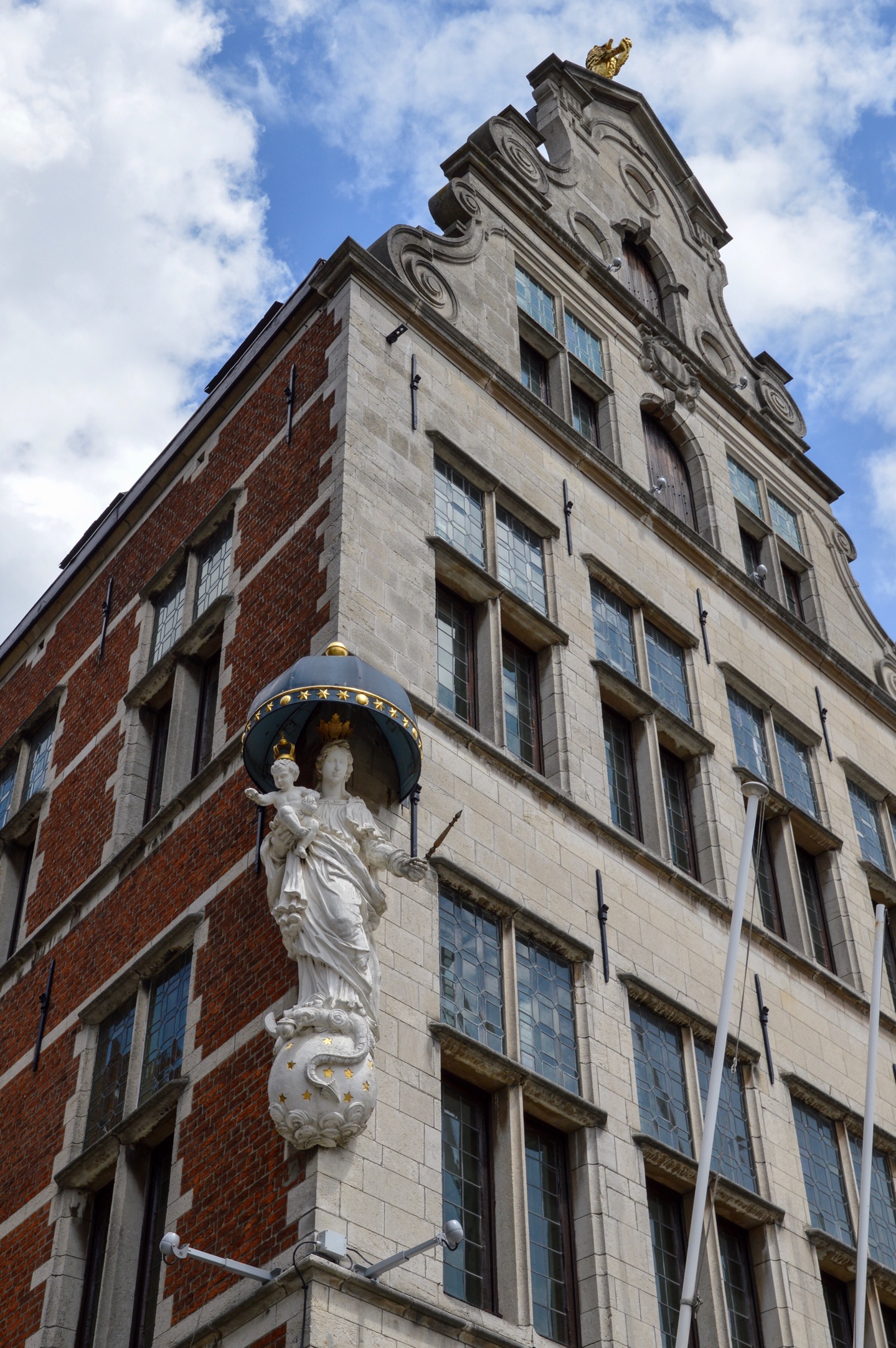 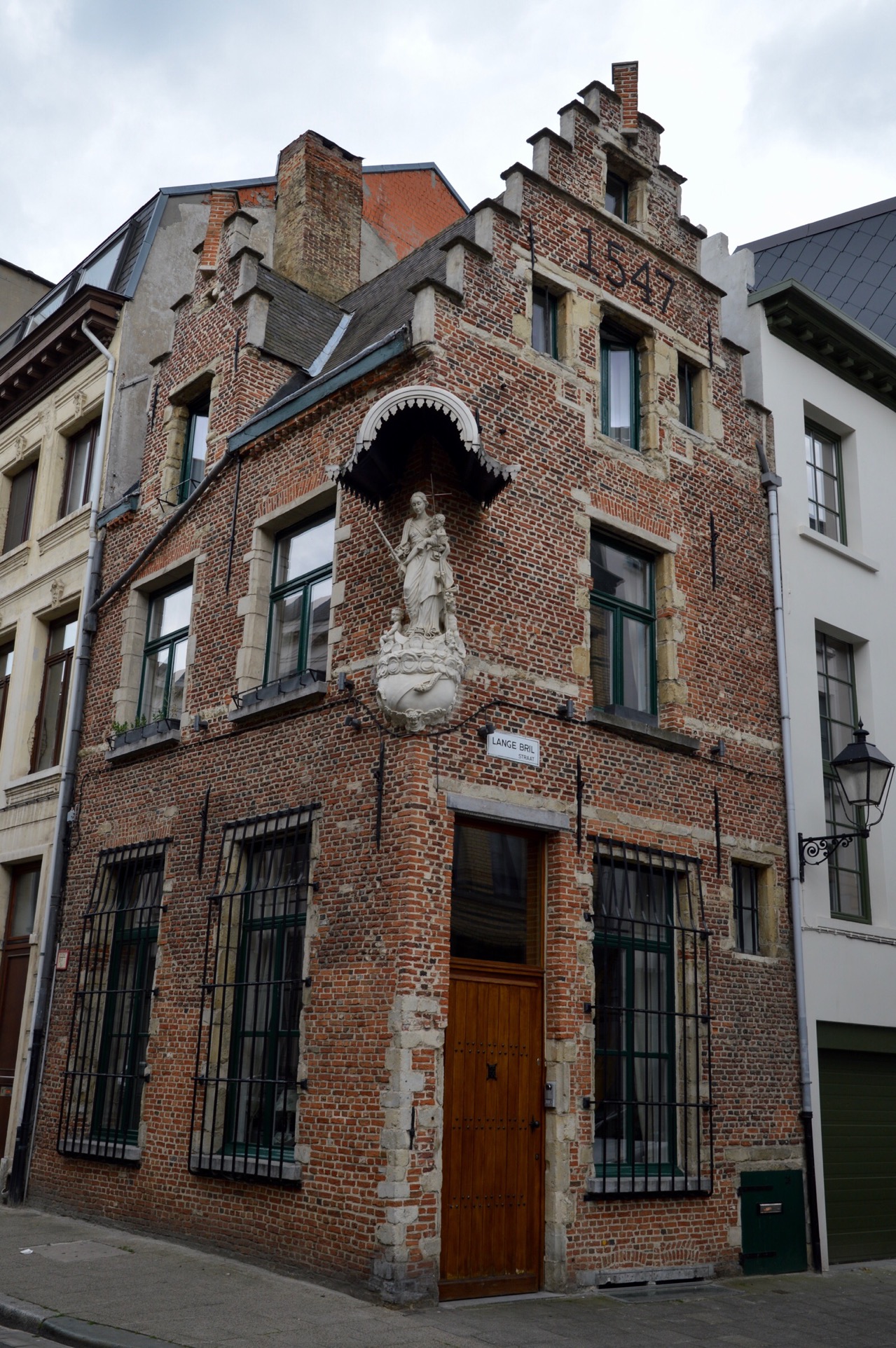 Go to the Meat House

One of the famous buildings in Antwerp is the Vleeshuis – or “Meat House.” It was the Butcher’s Hall, and the brick was also laid in such a way that it looks like layers of bacon. It is a cool thing to see. 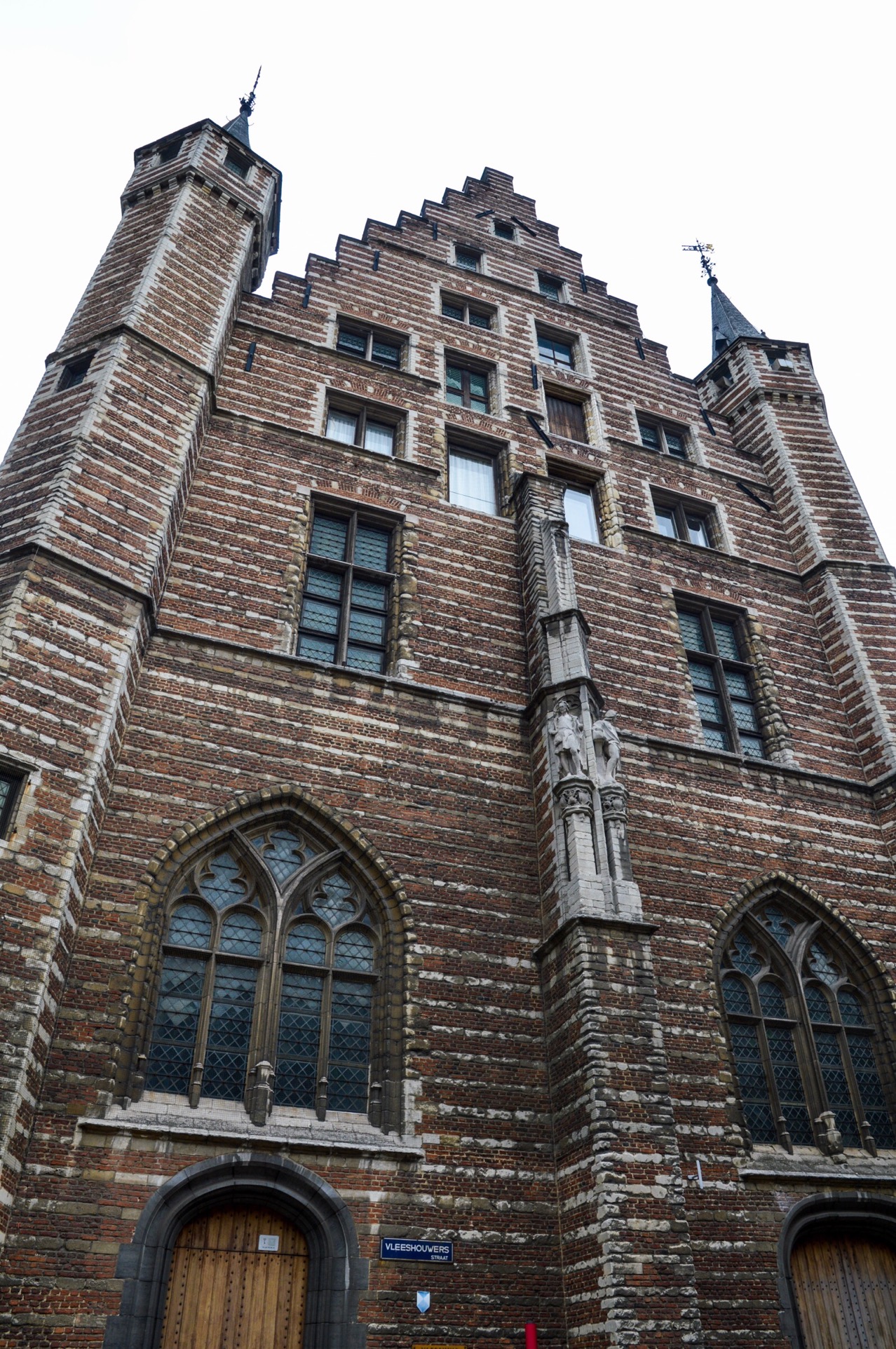 Antwerp has a ton of great architecture throughout the city so wander around and enjoy the varied buildings. 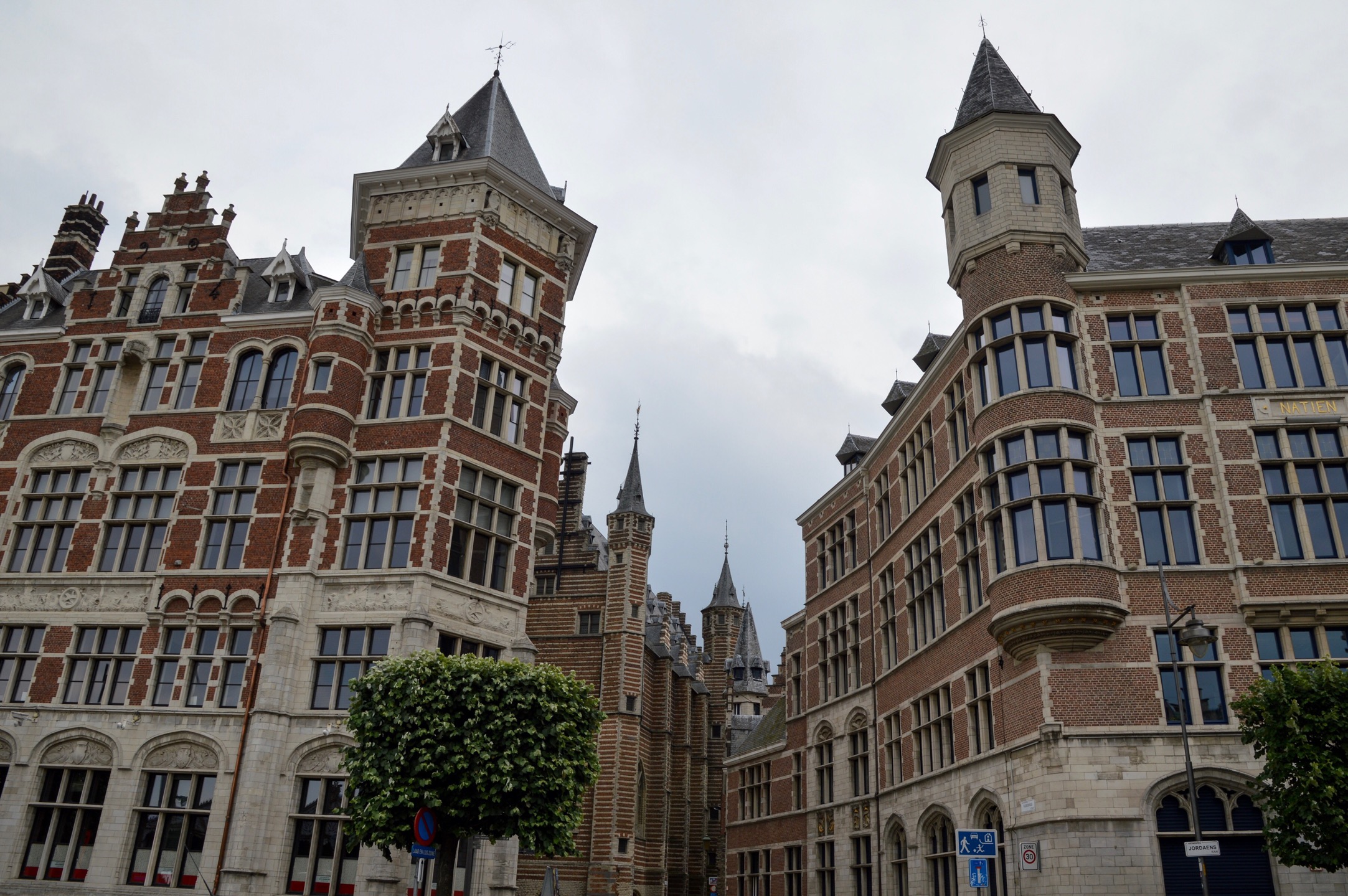 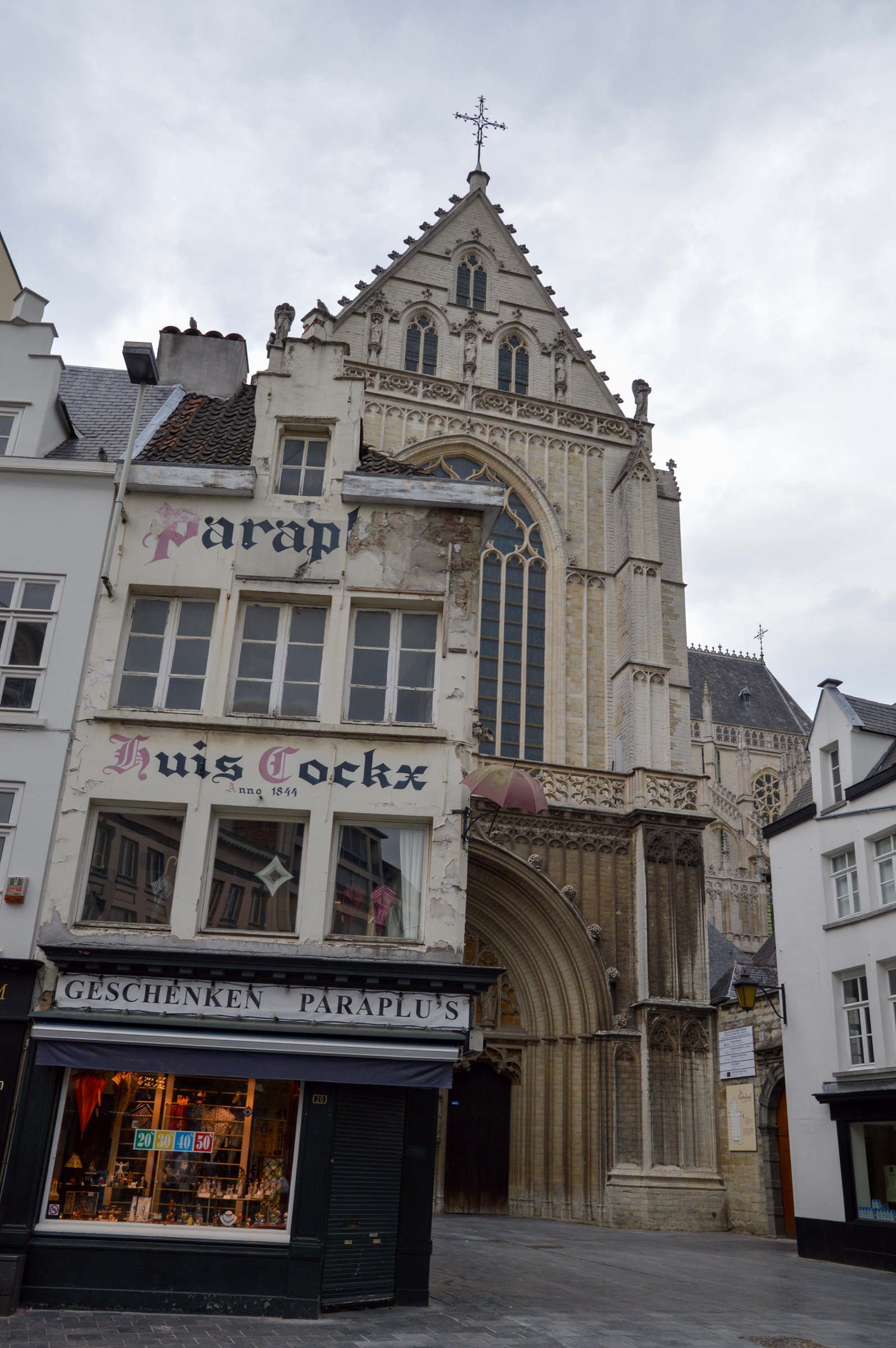 Explore the waterfront and Hetsteen

If you walk West from the Grote Markt, you’ll hit the Sheldt River. It’s nice to walk along the river, and you can visit Hetsteen, a small, old castle that is cool (and free) to walk through. Although, it now mainly has events and fun things for children. When we were there at the beginning of June, there was also a massive food truck festival along the water.

Get a great view of the city from the MAS

The Museum aan de Stroom (MAS) is a relatively new museum in Antwerp, having opened in 2011. MAS is a really cool place to visit for a few reasons. The building itself has a great design, both inside and out. 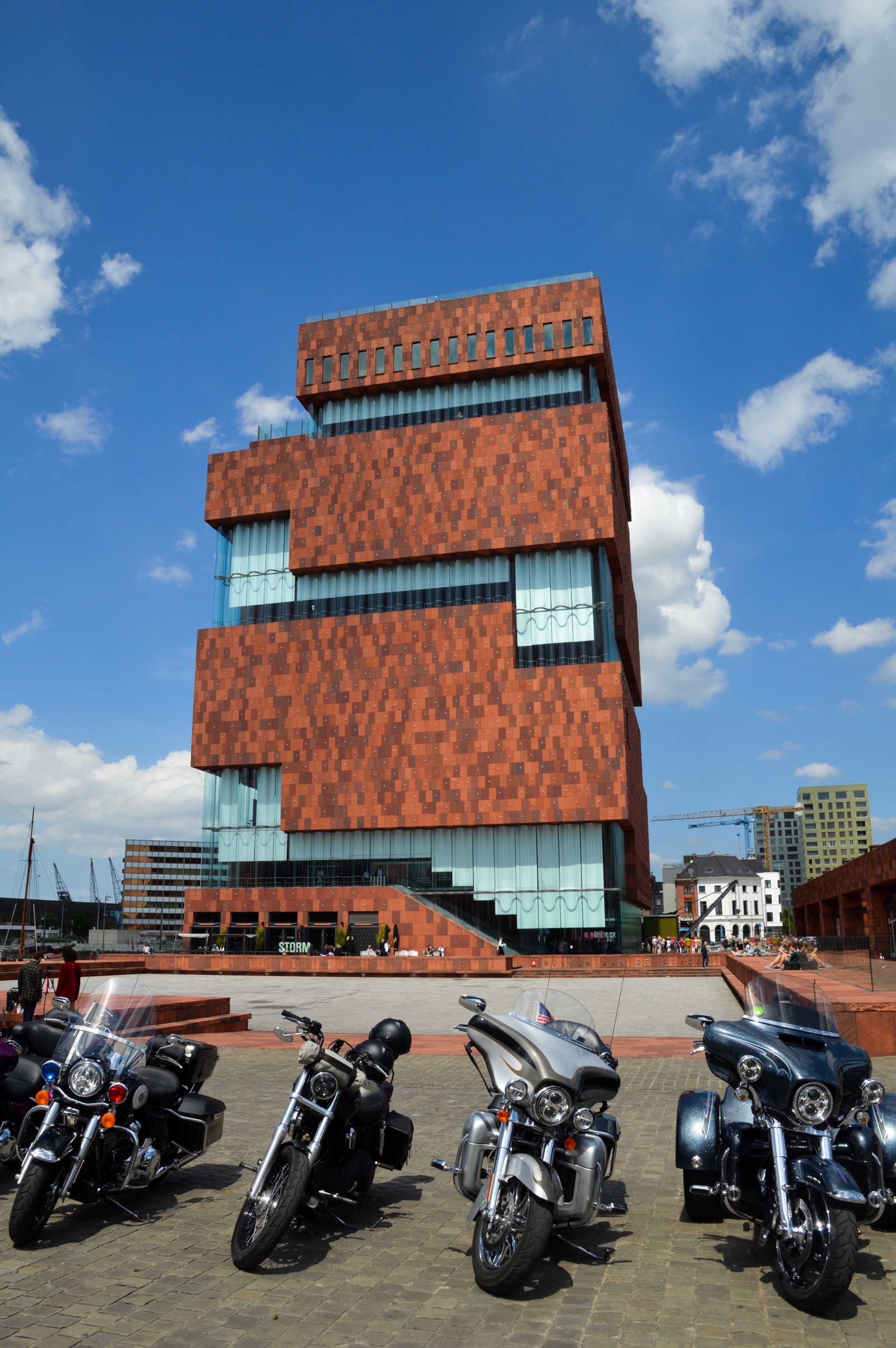 The highlight is its (free!) rooftop, from which you can see incredible views of the city. To get up to it, take a series of escalators, which go through the entire building. There are small exhibits throughout, workspaces for students, and cool curvy windows. 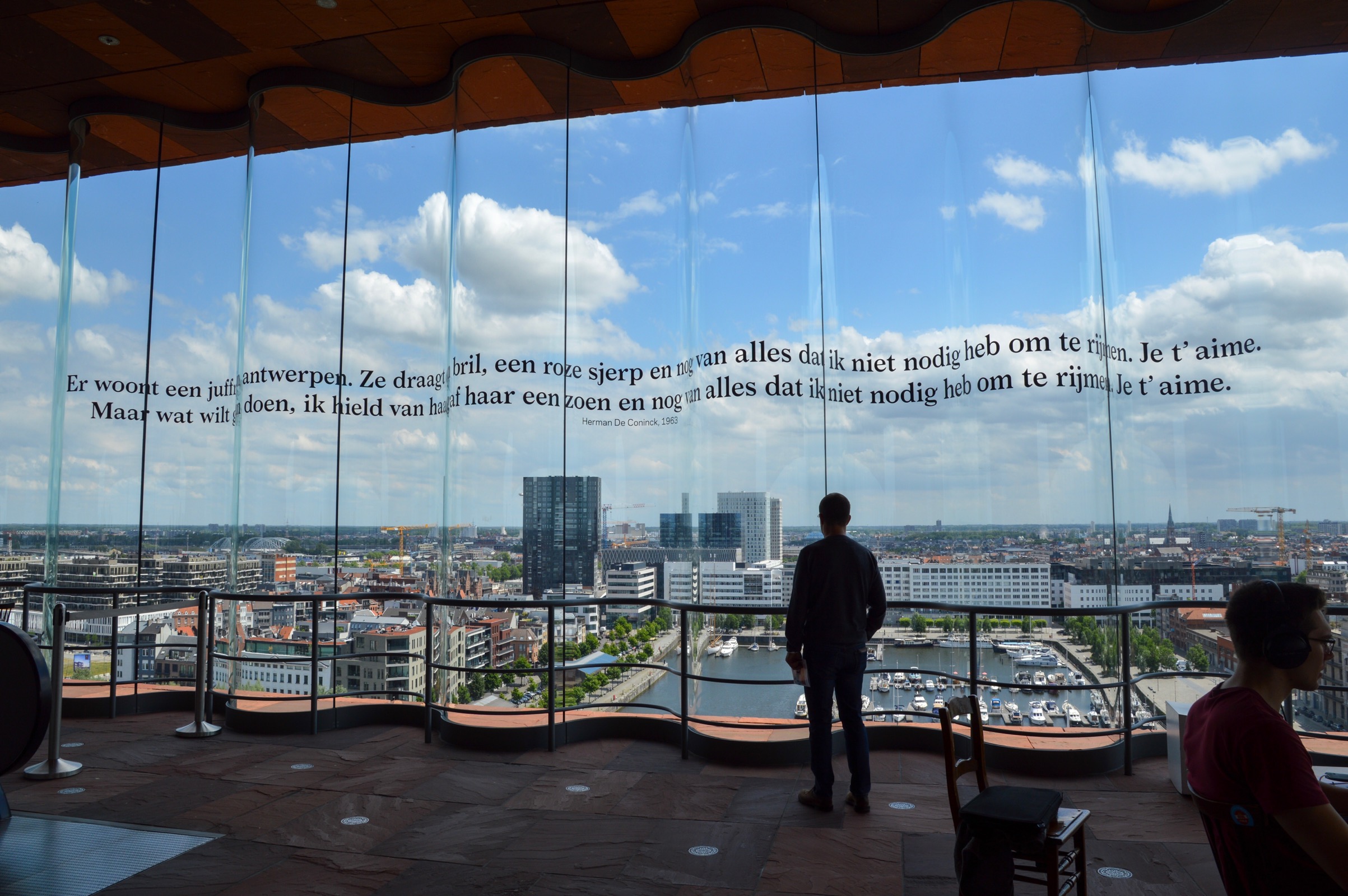 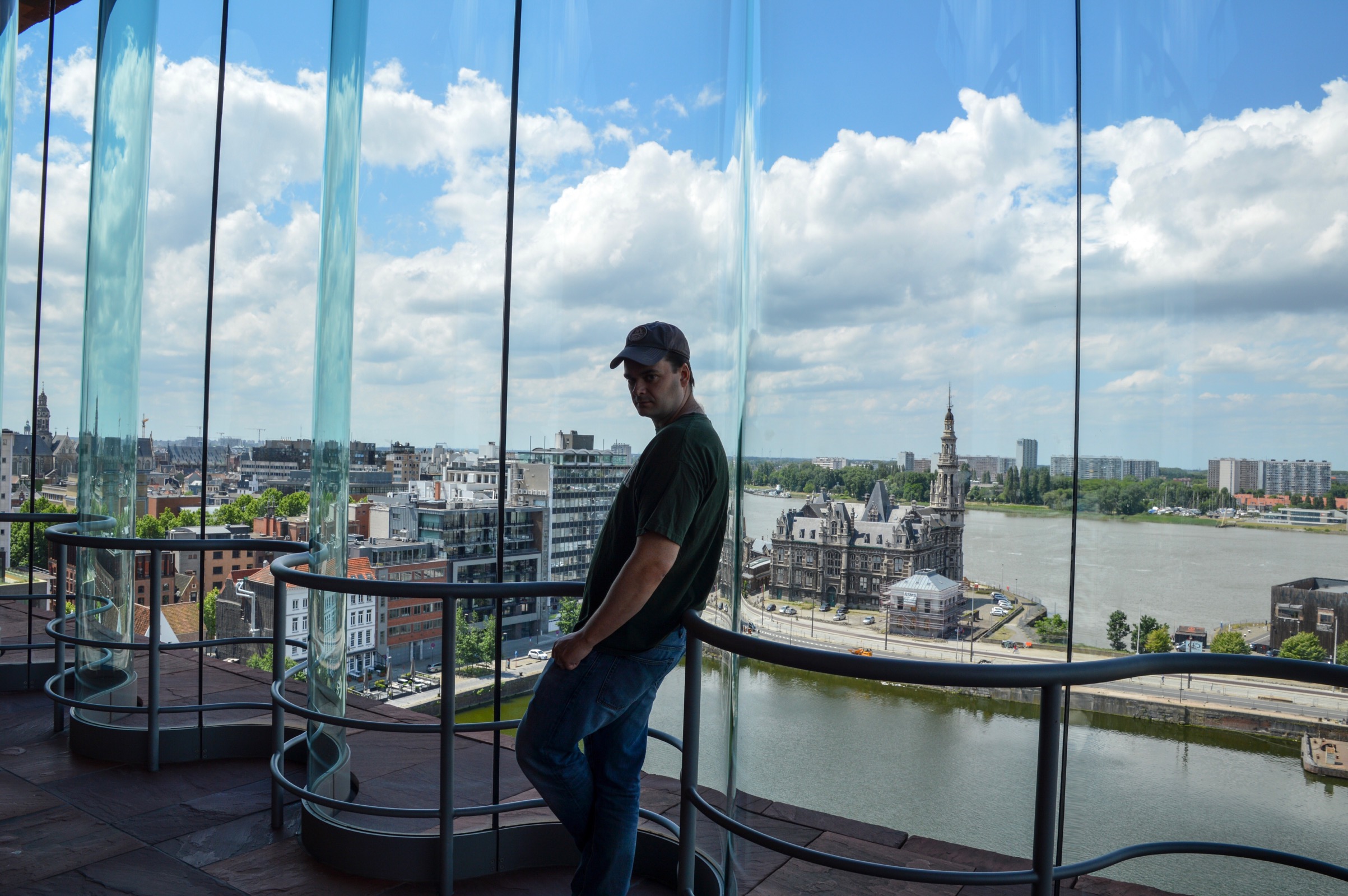 Once you get up to the roof, you’ll be rewarded with 360-degree views of Antwerp. There are even some cutouts in the protective glass that you can stick your camera through to get unobstructed shots. Watch out for the wind up there though! 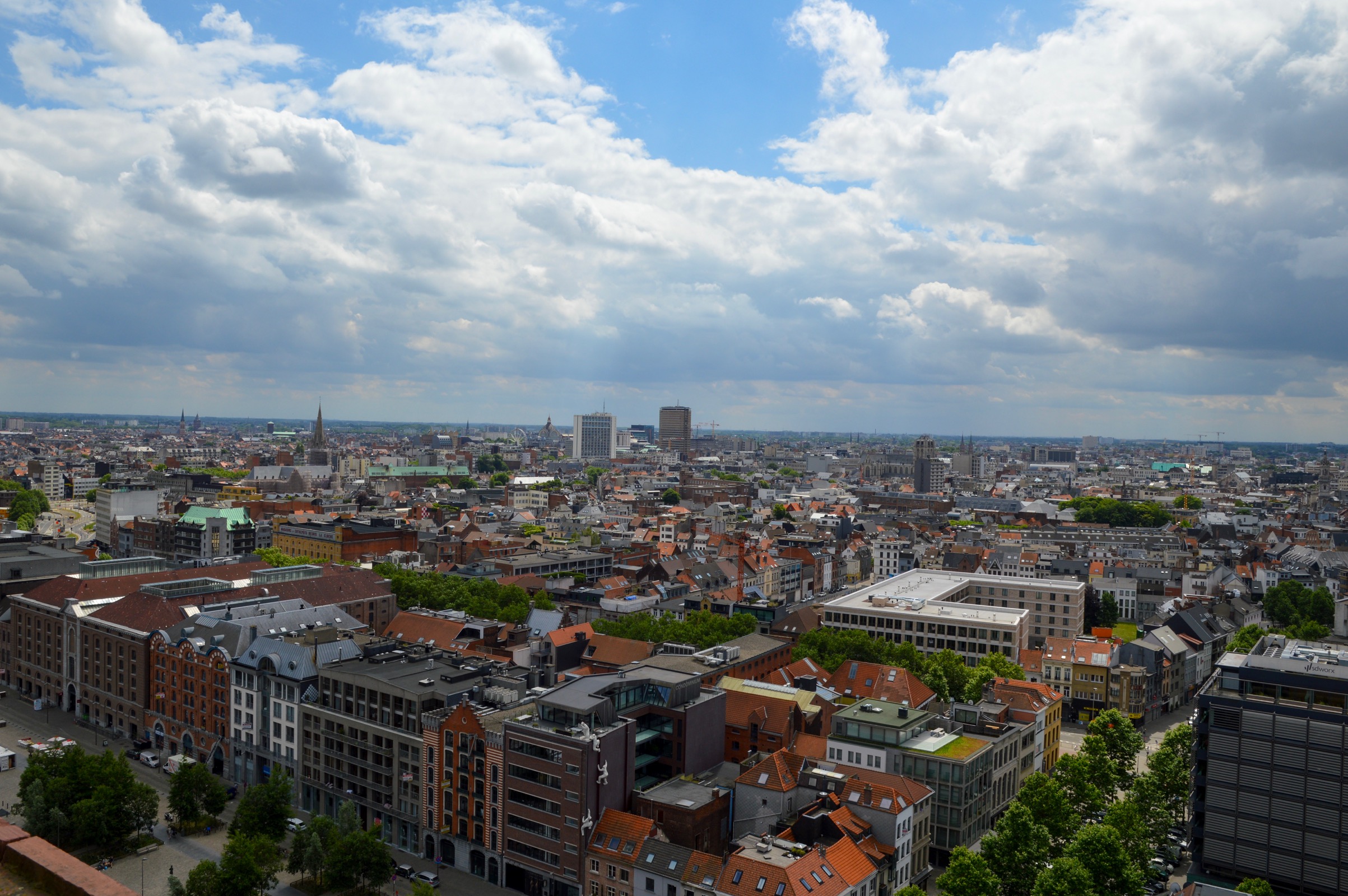 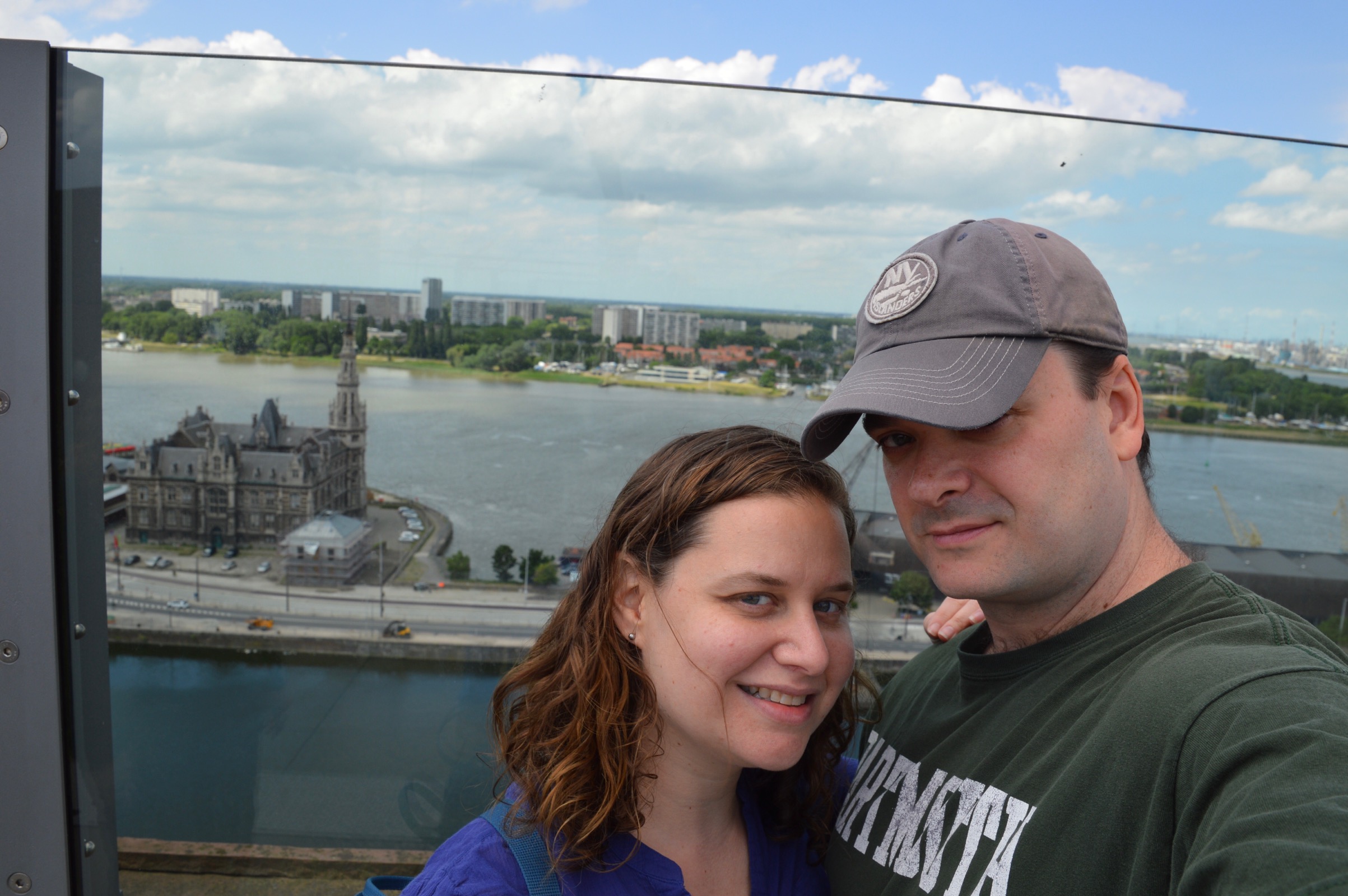 MAS is located in an up-and-coming part of Antwerp – the Eilandje district. It’s surrounded by water because it’s in the middle of a small harbor. It’s yet another lovely place to walk around and explore in the city. 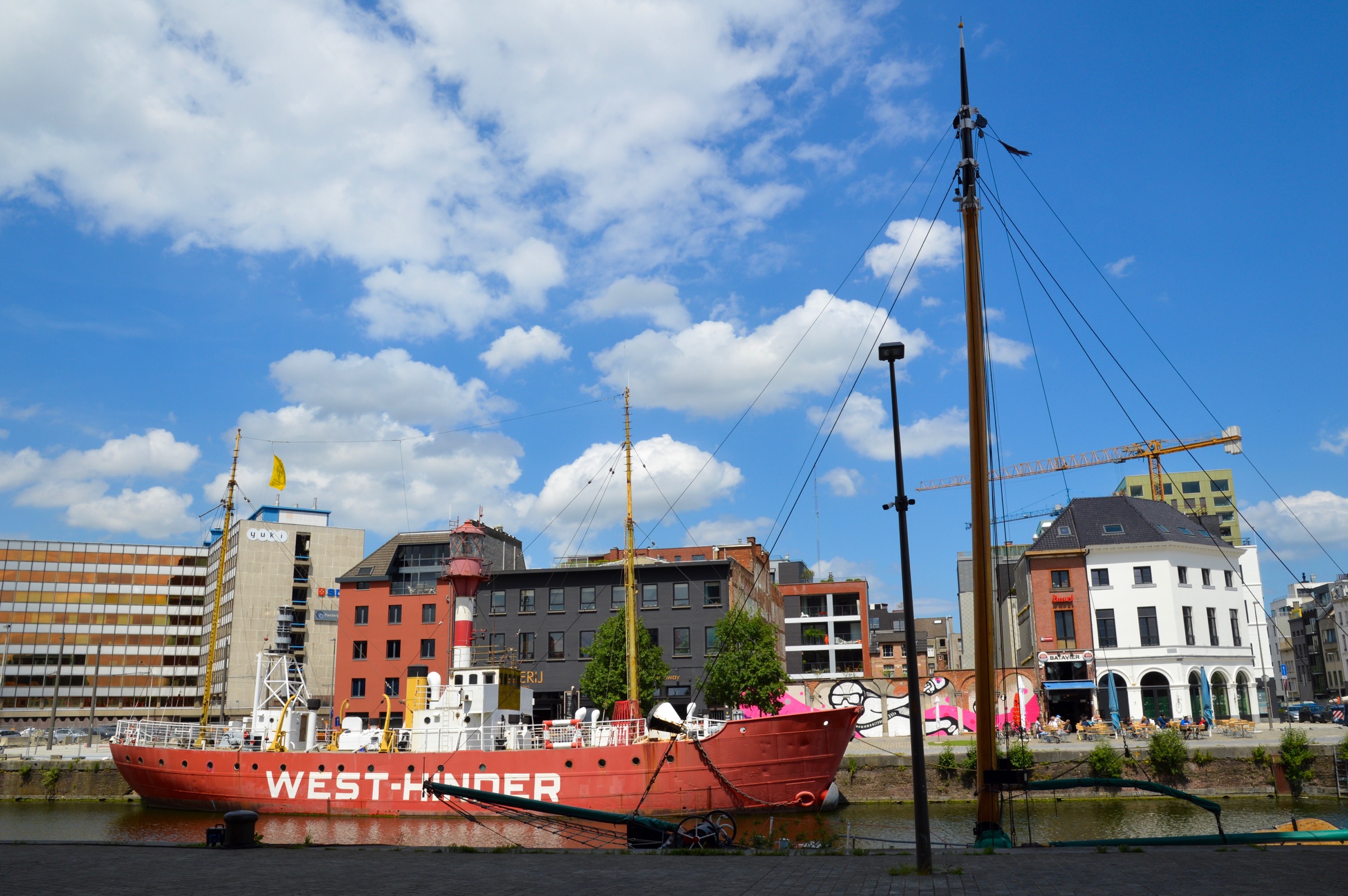 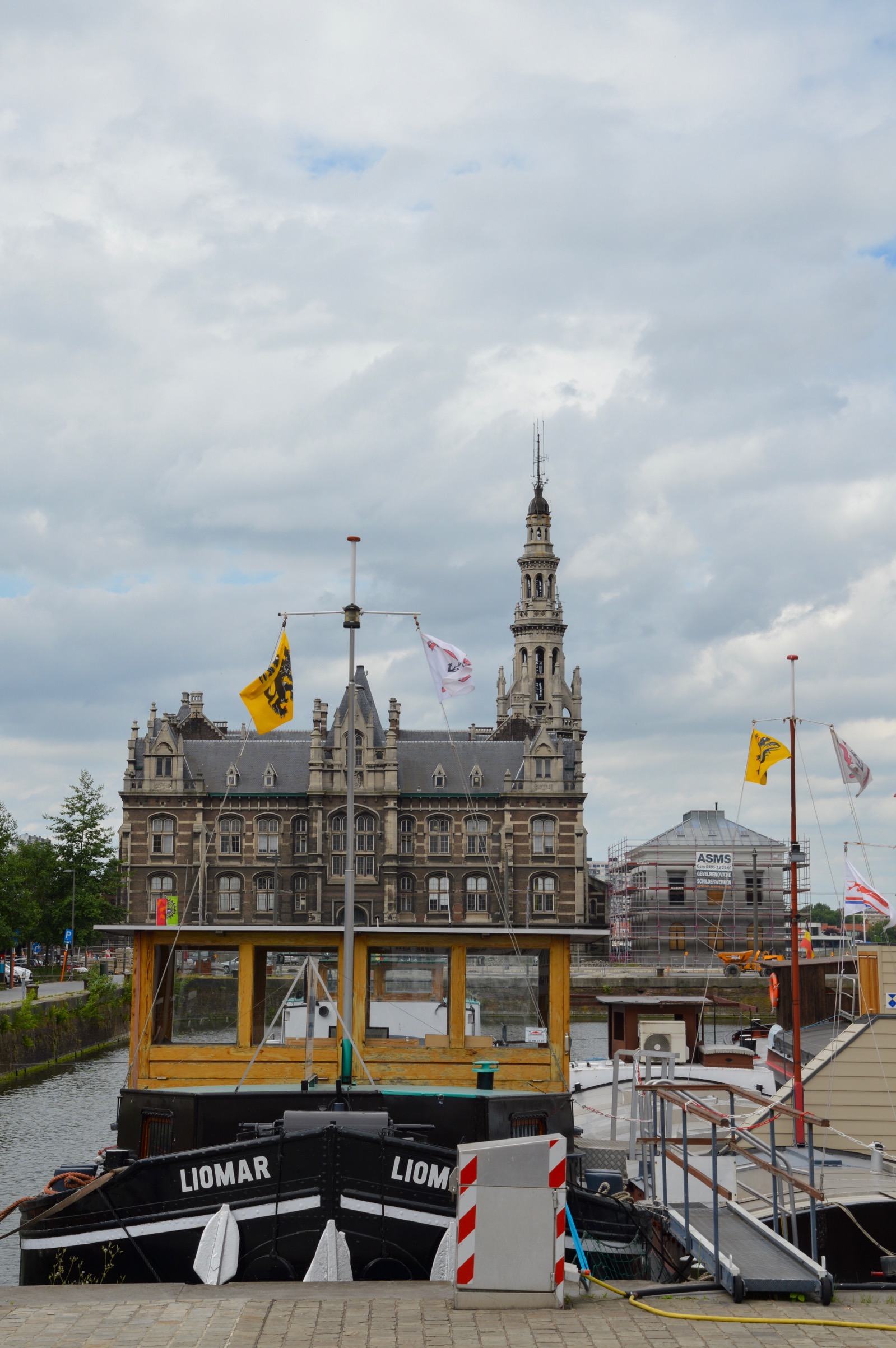 If you like the artist Rubens or if you like old, well-restored Belgian palazzos, you should visit Rubens House (Rubenshuis). It’s a great place to spend a couple hours.

Learn about printing at the Plantin-Moretus Museum

We really enjoyed visiting the Plantin-Moretus Museum in Antwerp. We learned about printing in the 16th century and wandered through the beautiful old building where the company and printing press were. 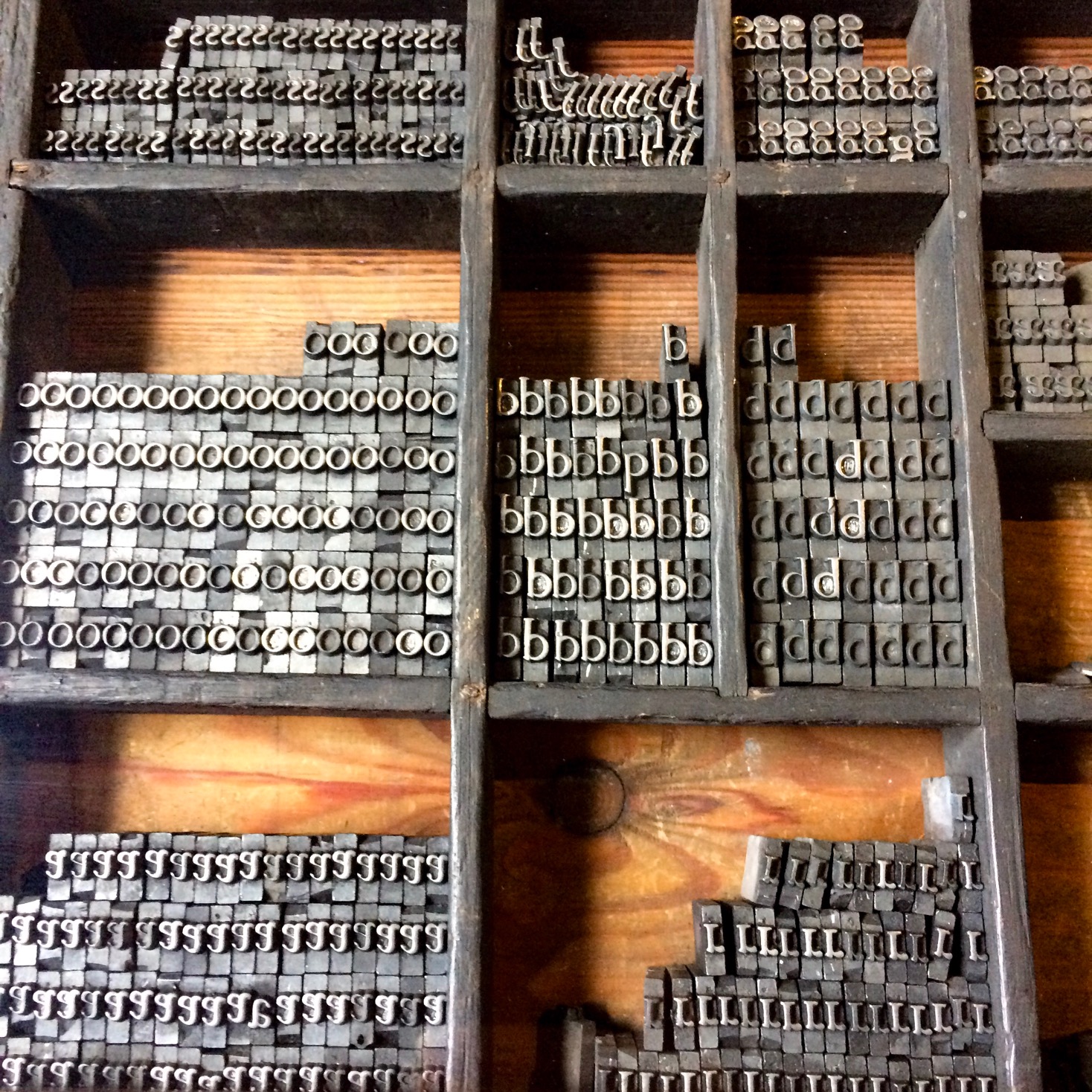 The rooms inside and collection were great (including one copy of the Gutenberg Bible), but our favorite part was the inner courtyard. There, a beautiful garden is surround by traditional buildings with crow-stepped gables and archways. 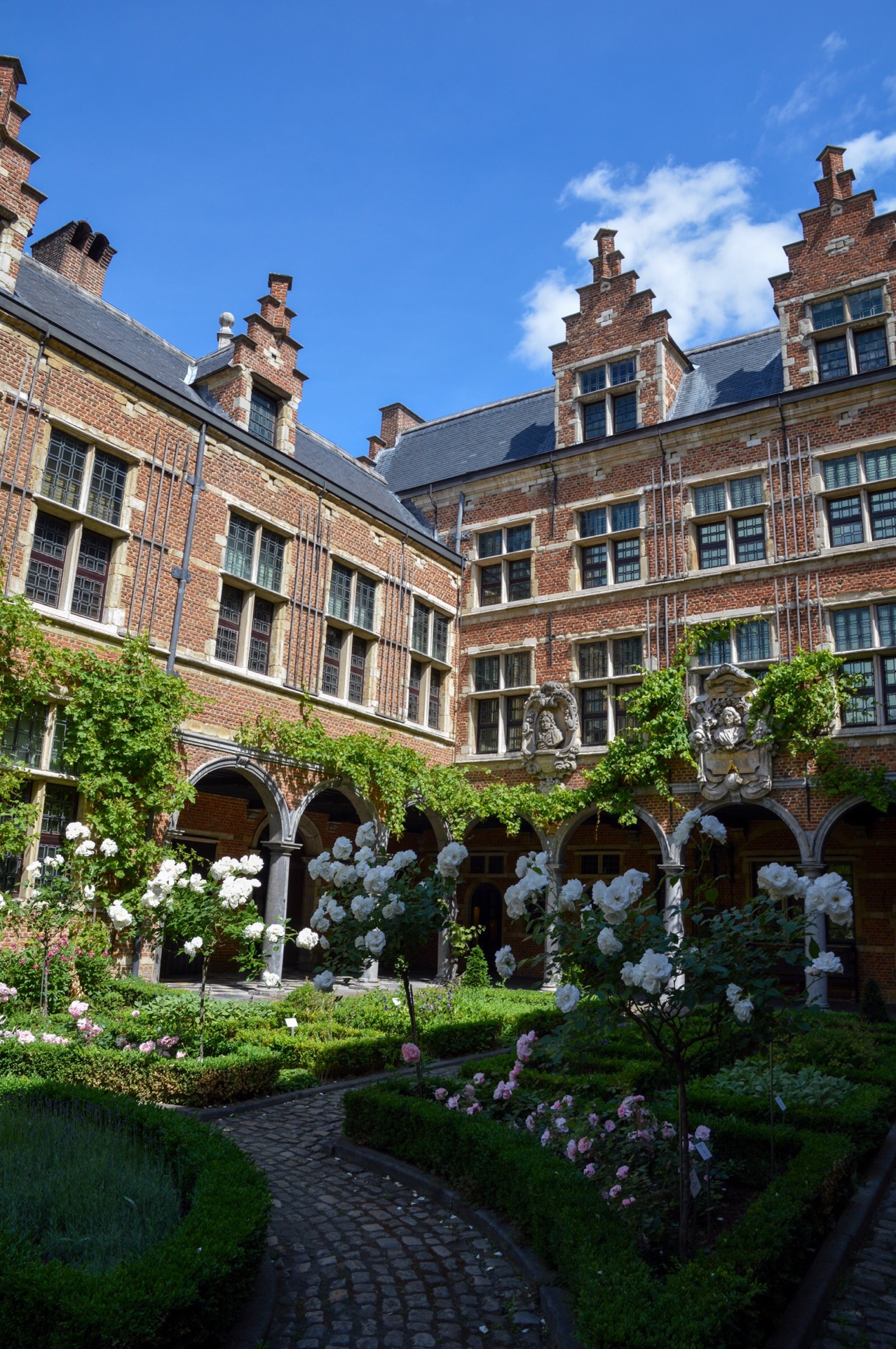 Right outside the museum is Vrijdagmarkt, a small, peaceful square with a few places to get a cup of coffee or a bite to eat. Which, of course, we did.

Antwerp is a great shopping city and is known for its innovative fashion design. We particularly enjoyed walking and window shopping on the streets around the Mode Museum (MoMu), the fashion museum. The larger chains are more centrally located, but these smaller shops are more unique and worth a visit.

Since we were in Antwerp on a weekend, we also made a trip to the weekly outdoor market, Vogelenmarkt. It’s located a couple blocks behind Rubenshuis and contains all sorts of things to buy and food to eat. It also supposedly has a whole bunch of birds (thus its name), but we actually didn’t see them.

We were excited to meet Sarah’s mom and her partner John in Antwerp! They had just spent time exploring some of France and hopped a train to Bruges before meeting us. It was our second time in Antwerp, but their first, so we had fun showing them places we’d discovered eight years ago and finding new spots. It’s such an easy city to get around and there’s so much within such a small area, it really was perfect. 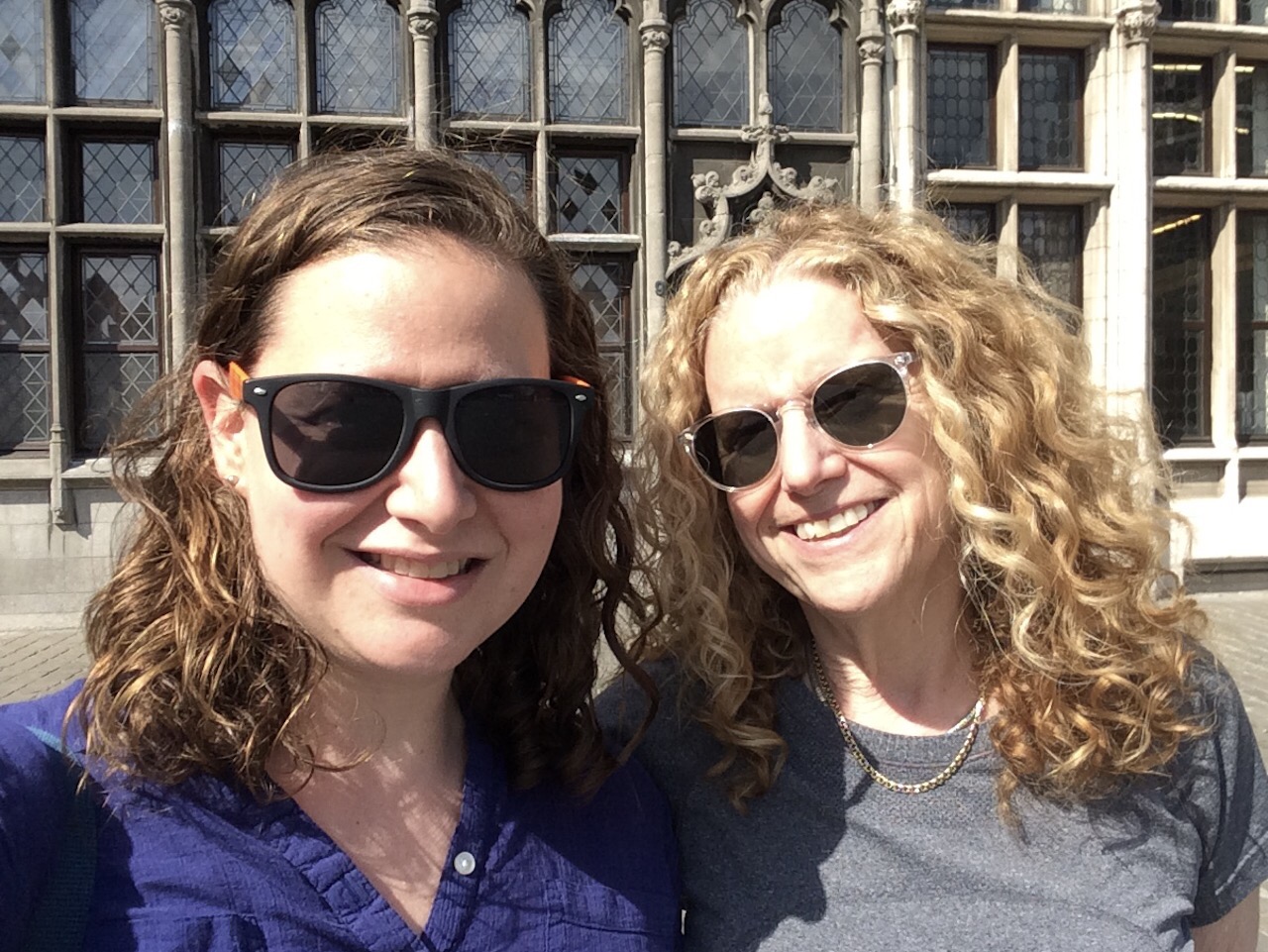 Eating and drinking in Antwerp

There are a lot of really great restaurants in Antwerp, and luckily you don’t have to assume that the ones in the main tourist center are bad. Here are our recommendations for restaurants in the center of Antwerp and a little further afield. And, of course, our picks to drink the best Belgian beer.

Grand Café De Rooden Hoed is right across from the Cathedral of our Lady. They have a humongous menu but everything looked great. The mussels were especially delicious (and plentiful), and Sarah found a new type of beer by her the maker of her favorite beer, Kasteel. 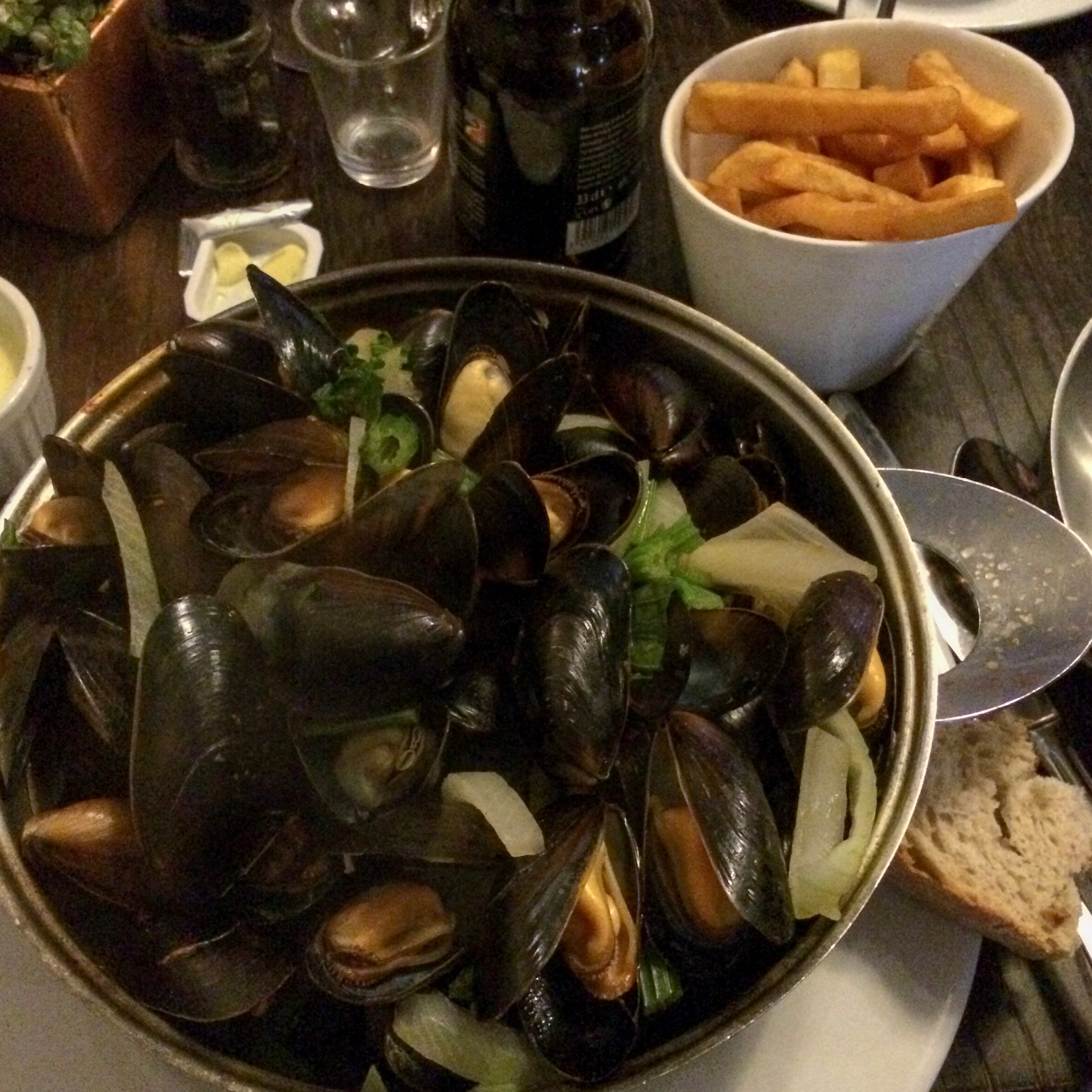 We first ate at De Zeven Schaken eight years ago, and returned this visit as well. It’s located on one corner of the Grote Markt. The highlight of their menu is their selection of traditional Flemish stews.

Fiskebar is a bit outside the center, but not too far – it took about 25 minutes to walk there. Even if you can’t speak the language, you can probably guess it’s a fish restaurant. And it was really really great. Highly recommended – plus it is always nice to get more into neighborhoods where people actually live. 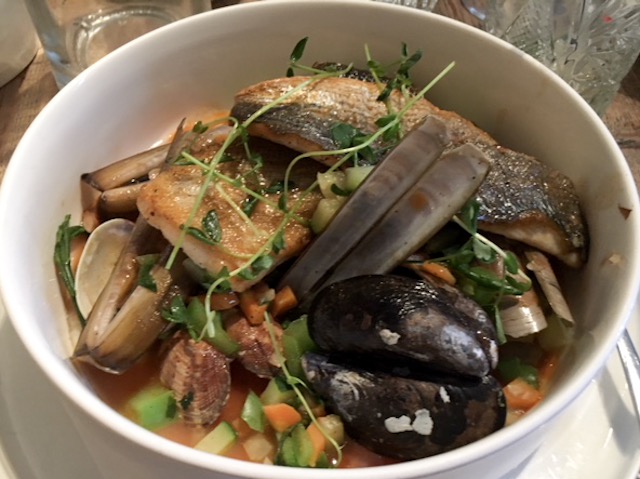 The best beer bar in the center of the city is Paters Vaetje. The cozy space has a lot of character and the beer list is exhaustive. 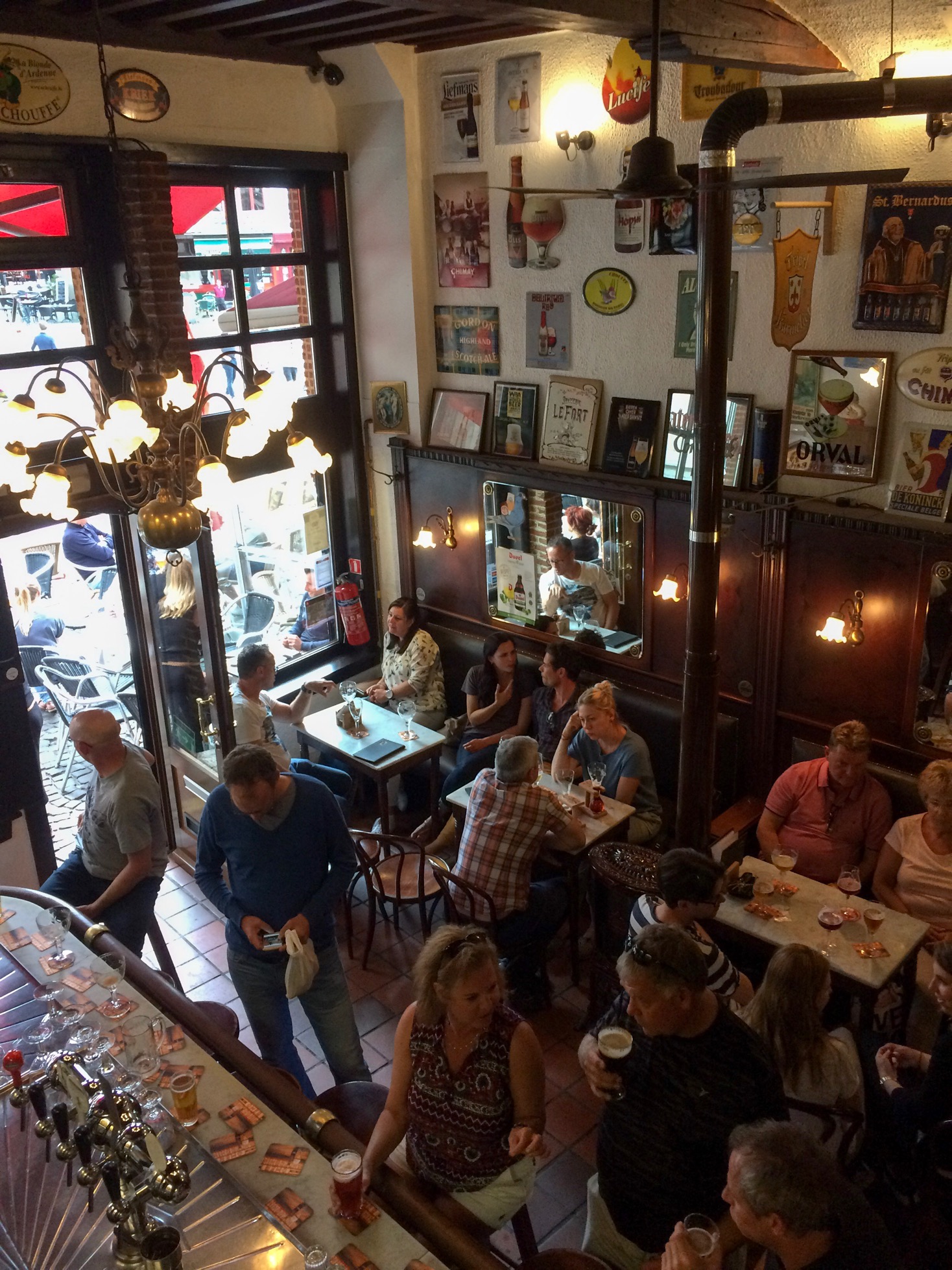 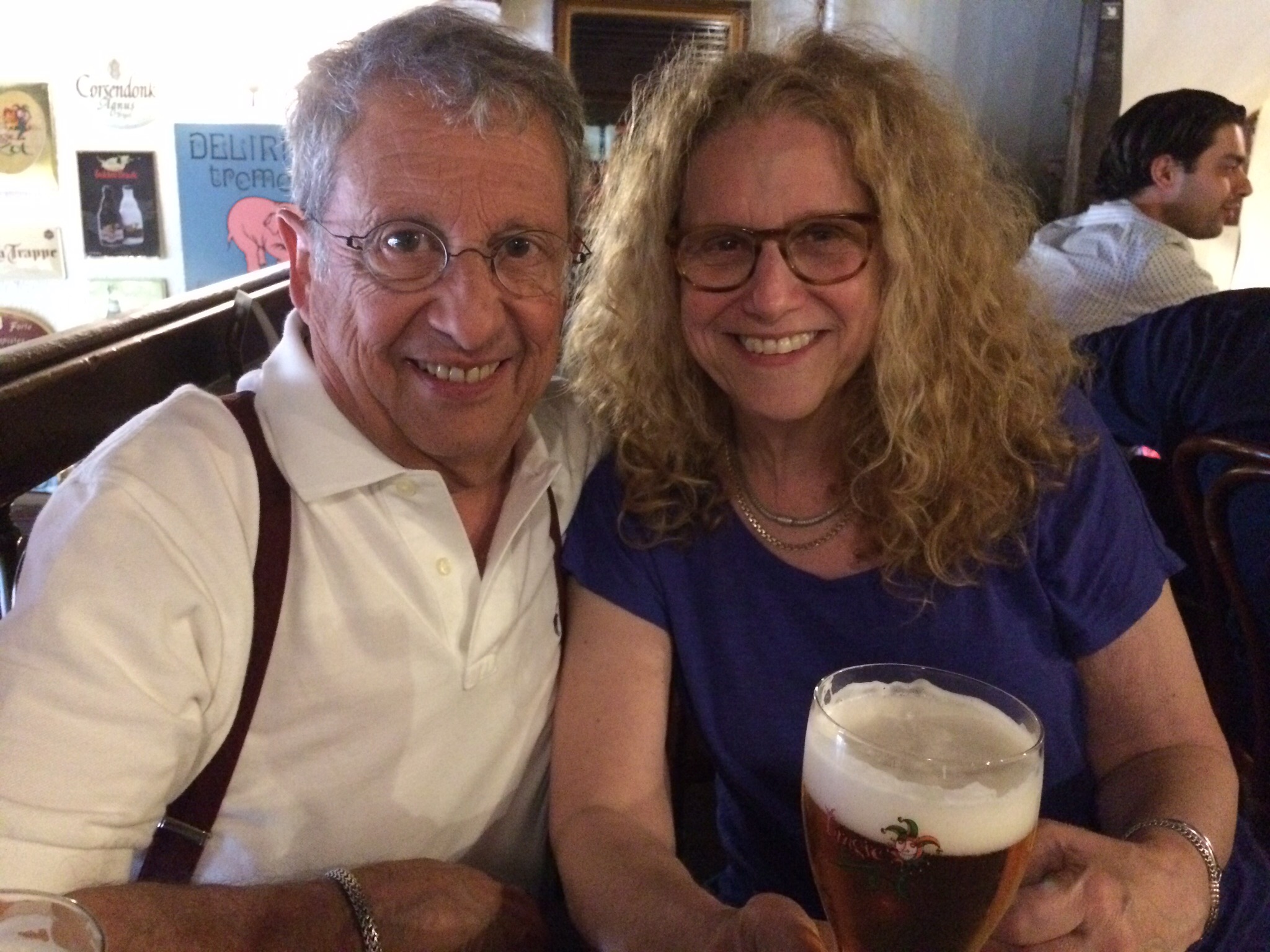 Just a few blocks away is Billie’s Bier Kafétaria. They had some different, interesting things on tap and on their (slightly smaller) beer list. The space is pretty small, so get there early if you want a table. They also serve food, although we only went for a pre-dinner drink. 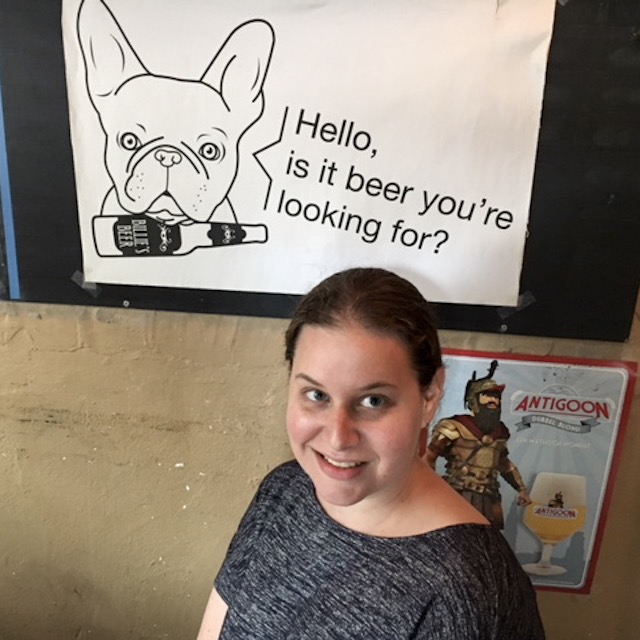 There are a lot of chocolate shops in Antwerp. We restrained ourselves and only went to one: Günther Watté. The truffles were, as expected, delicious. 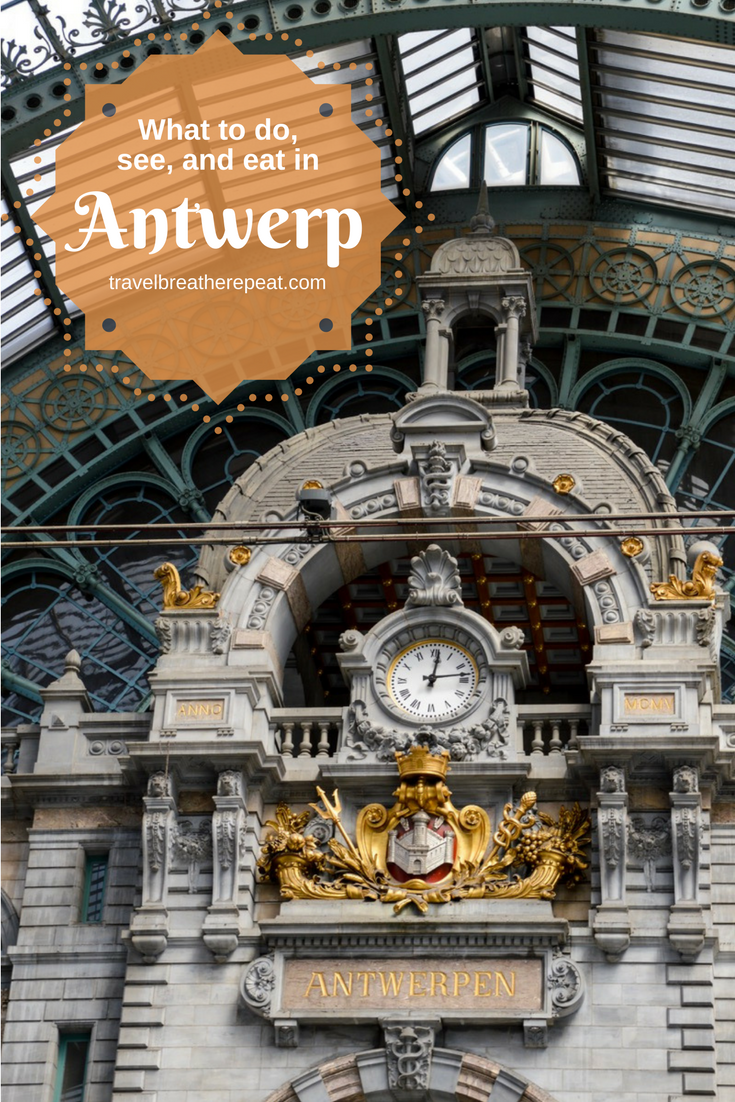 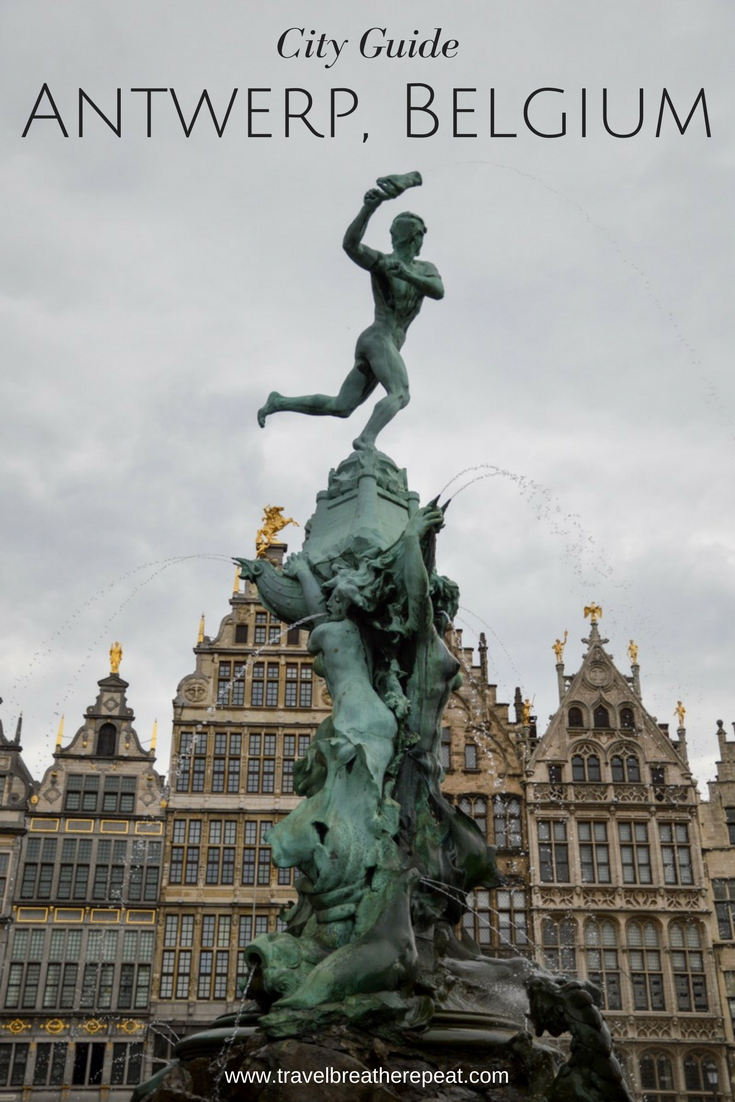 29 thoughts on “City guide: what to do in Antwerp”