We just returned from a long weekend in Riga. This was our second visit to Latvia’s capital city, so we were keen to seek out some new and unique attractions. On our first visit four years ago, we stayed in the center of the city, close to the Old Town and surrounded by art nouveau architecture. This time, however, we ended up staying across the Daugava River. We didn’t know what to expect, having never even crossed the river on our first visit. But as we’ve learned many times, sometimes having pretty much zero expectations on a trip makes the whole thing that much more special. We honestly felt like we couldn’t have picked a better location. We did some entirely new Riga sightseeing, explored different neighborhoods we’d previously never heard of, and re-fell in love with the city. So we’re writing this post of five things to do in Riga that might be a bit lesser-known to encourage you to get out of the city center and go see what’s on the other side of the Daugava River. 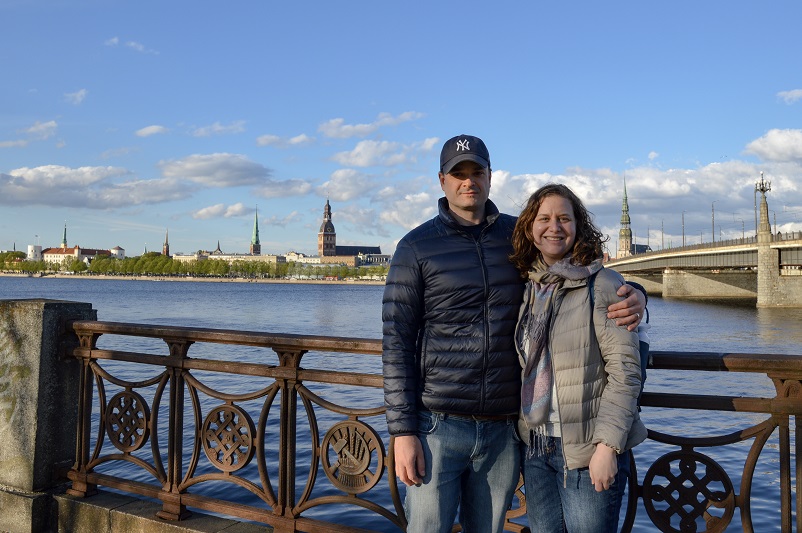 There are a few ways to get over to the other side of the Daugava River. We highly recommend taking a walk across the Akmens Bridge. It will take you about 10 minutes to cross on foot, and along the way you’ll get the most scenic views. Looking behind you, you’ll see Riga Old Town, the Central Market, the impressive Latvian Academy of Sciences building. To your left, you’ll see the arched Railway Bridge in front of the colorful TV tower. To your right, you’ll see the modern Vansu Bridge. And in front of you, you’ll see the incredibly unique Latvian National Library. 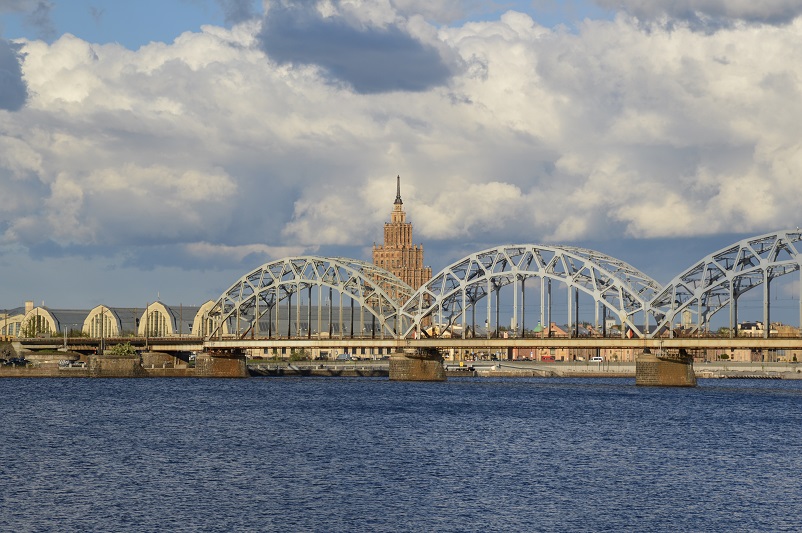 If you have the opportunity, definitely try to walk on both sides of the bridge to capture all these great shots. And once you make it over the bridge, take some time to walk along the river banks. There you’ll get even better views across the river of the Old Town and you’ll see some other interesting sights. 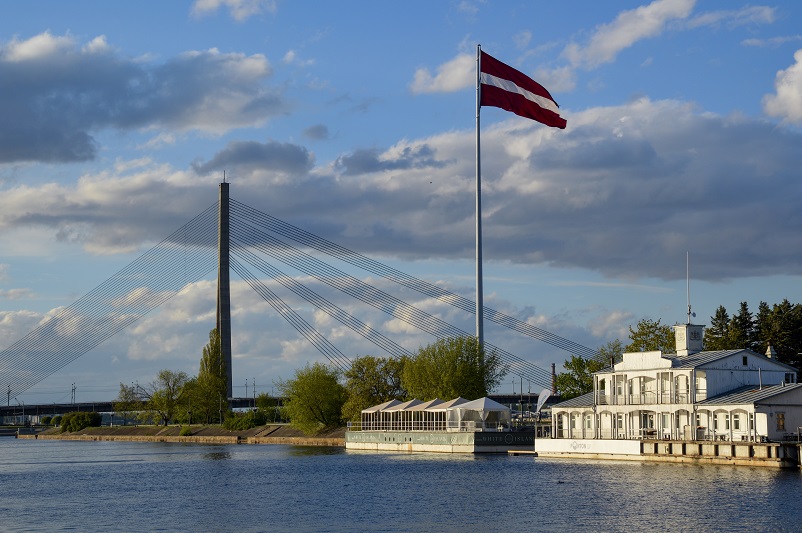 You can also easily take public transportation, and you won’t have to wait too long for a bus or tram to take you to the other side where there are several main stops.

Visit the Castle of Light 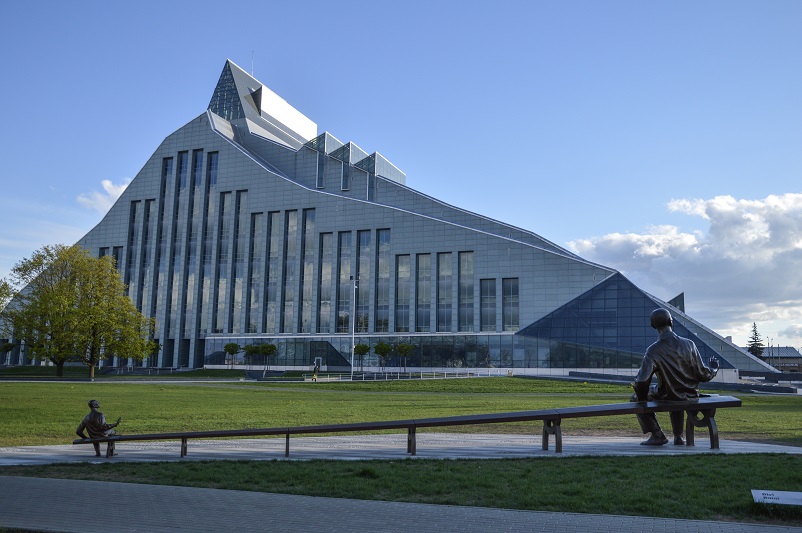 You’ve no doubt heard of the Riga Castle in the Old Town, but did you know there’s another castle in the city? The Castle of Light – the building that houses the National Library of Latvia – sits just across the Daugava River. The library was formed in 1919, but its current home is relatively new, having opened in 2014. It’s an incredibly striking building as it resembles a mountain topped with a flame. The inspiration for the building was found in Latvian folklore: a crystal mountain symbolizing achievement of the highest order and a castle of light serving as a metaphor for lost wisdom regained after a period of war and occupation.*

Though you might be satisfied admiring the impressive building from the outside, it’s definitely worth a visit inside. It was a surprising highlight of our Riga trip. The building is beautiful and well thought out with lots of spaces open to the public. There’s also the very cool People’s Library: five floors of books donated by Riga residents stored in an eye-catching (and photo-worthy) glass display. At the top of the library are two floors of open space offering 360 views of the city. This space is only open to the public on Saturdays, although you can go with a guide other days of the week. 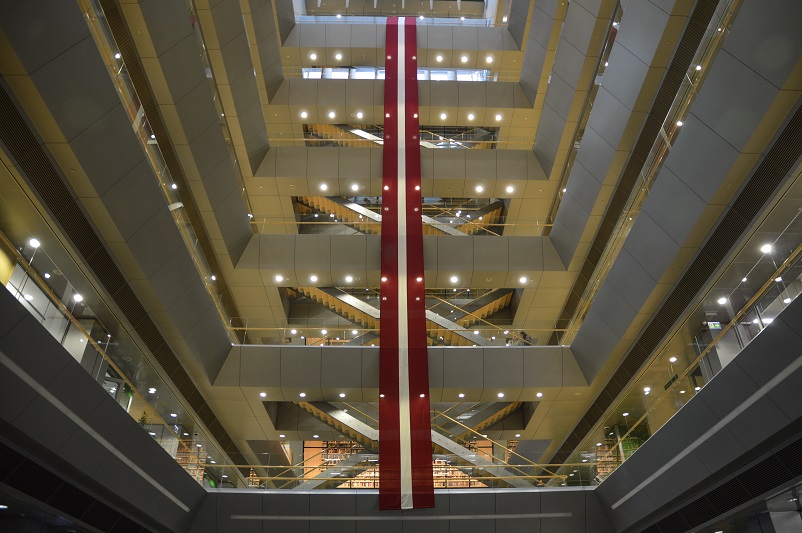 There are also some small exhibits in the library. During our visit, they had an interesting exhibit about everyday life in Riga in 1918 after WWI and a moving photography exhibit about parental leave in Sweden. On the ground floor, they also had an exhibit of items moved from the old library to this new one. And out front, don’t miss the really cool sculpture. 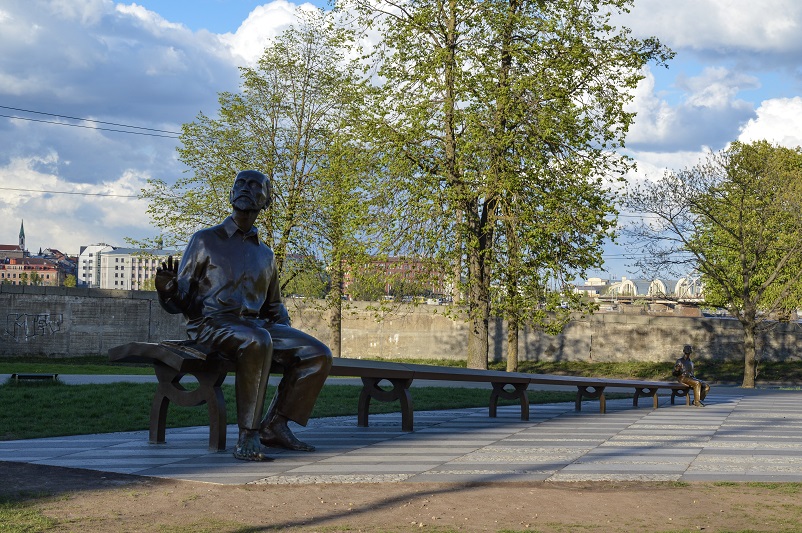 The library is open everyday and is free to enter. You must store your coats and belongings in lockers and get a visitor pass to enter from the security desk. The entire library is wheelchair accessible including the top floors with the viewpoints. You can read more information about visiting on the National Library of Latvia website.

The closest public transportation stop is named after the library: Nacionālā bibliotēka. 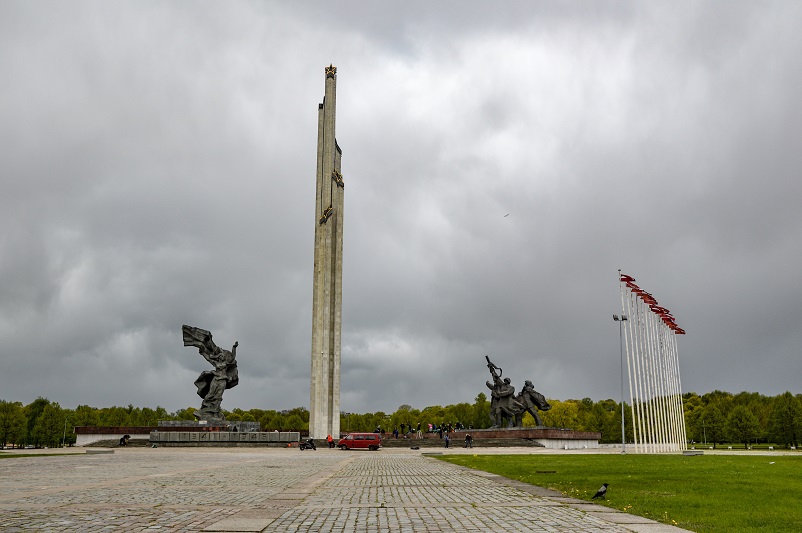 A visit to Riga is incomplete without a trip to see the Freedom Monument near the Riga Old Town. But there’s another monument worth seeing on the other side of the river: the now-named Soviet-era Victory Monument. Set in a very large, bare concrete space, a very tall obelisk topped with five stars stands between a statue of Mother Motherland and a statue of three soldiers. It was built in 1985 to commemorate the Soviet victory over Nazi Germany in WWII, but also has come to represent the subsequent Soviet occupation of Latvia. It’s rightfully a bit polarizing for the people of Riga today. But for a visitor interested in history and Soviet architecture and monuments, it’s a must-see.

Get lost in Memorial Park 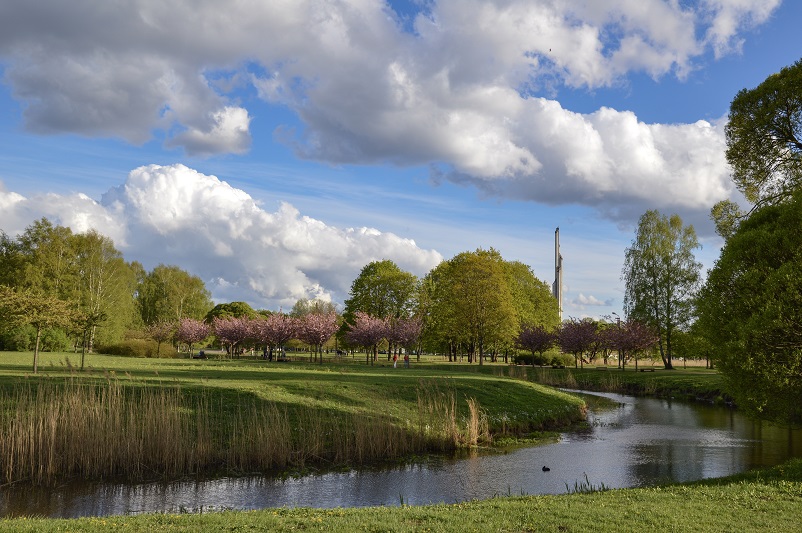 In a bit of a contrast, the Victory Monument is surrounded by beautiful green parkland. If you’re looking to escape from the busyness of the Riga Old Town, we can definitely recommend a visit to Memorial Park. Unlike the main parks on the other side of the river, Memorial Park is less manicured and a bit more open. Small streams lined with beautiful old trees cut through the grass. And in one especially lovely area, the water is lined by several cherry blossom trees that were a gift from Japan. Memorial Park is a great place for a stroll or some exercise as it has some well-maintained paths that are good for running. 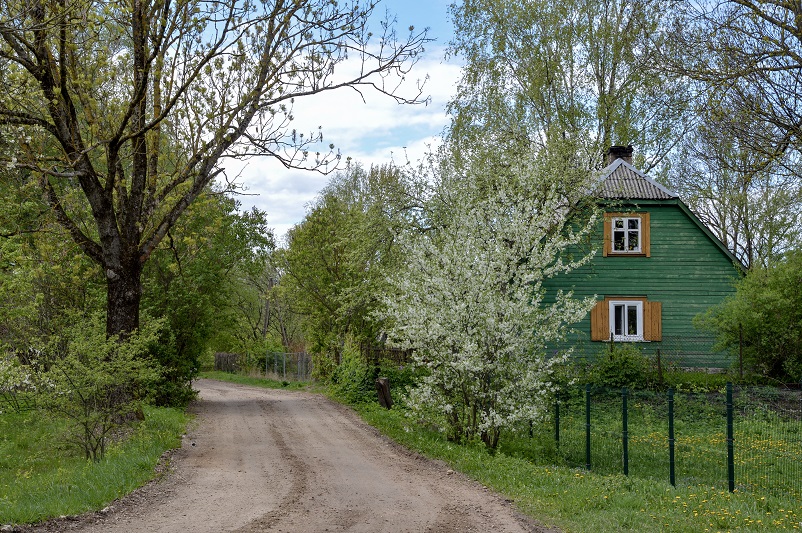 Kipsala is a neighborhood on a small island located between the Daugava River and the Zunda Channel. We imagine it’s a nice place to live because it’s a really lovely place to explore. We spent about an hour walking along the river, along cobblestone streets, through slightly forested areas, admiring the wooden houses. Such houses are typical of this region, but not so prevalent in the city center of Riga where tourists spend most of their time. 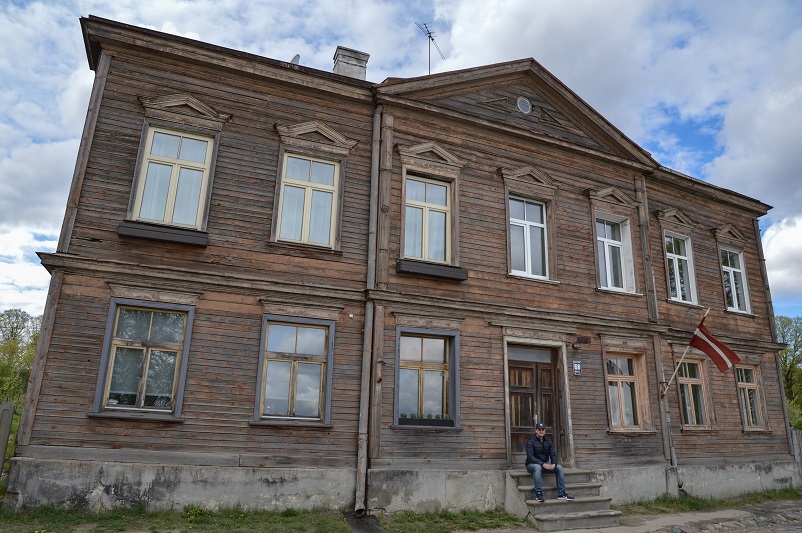 So the whole feeling of Kipsala is different from much of the rest of Riga, and being there almost felt like an escape to a small village. The views across the water, first of the Riga Old Town, and then of the more industrial parts of the city are worth the trip as well. 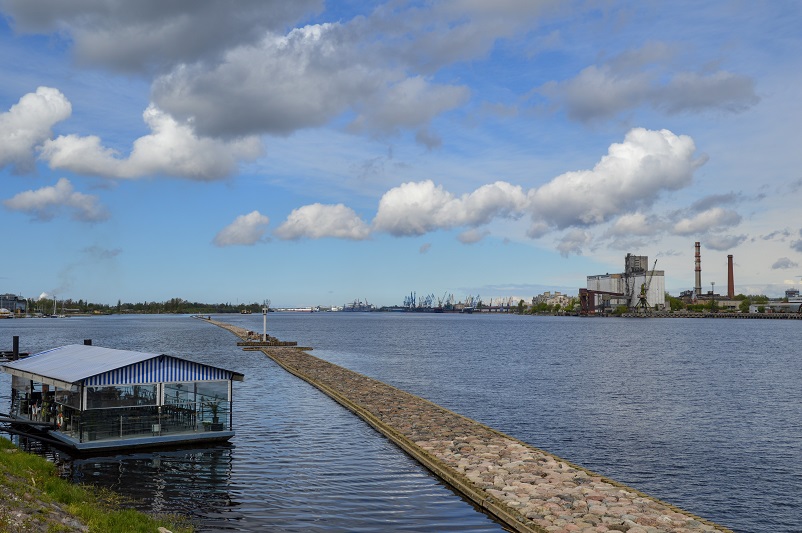 If you want to stock up for your visit to this area or just in general, there’s a mall at the top of the island with an enormous Rimi supermarket, as well as some other shops. Read about more things to do in Kipsala from our friend (and Riga local), Anita.

There are many other neighborhoods to explore and sights to see on this side of the Daugava River. We hope we have the opportunity to return one day to check them all out!