The 37th country we visited together was North Korea. It was a wholly bizarre and surreal experience.

Full disclosure, all we did was go on a DMZ tour from Seoul.

The tour started with a bus-ride about an hour north of Seoul. Our guide pointed out the small stretch of highway from where you can see North Korea along the way. There is barbed wire and look-out towers dotting the road to keep watch for people trying to get into South Korea via the river. To get into the DMZ area, you must cross what’s called Unification Bridge. Only authorized vehicles are allowed in. As we were told numerous times on the tour – the name “Demilitarized Zone” is quite misleading since the DMZ is one of the most heavily guarded and militarized places in the world.

Our first stop was Dorasan Station. For approximately one year between December 2007-2008, freight trains ran between South Korea and North Korea. Dorasan Station was the last stop in South Korea. Now, the station is a tourist site and people can take the train there from Seoul. 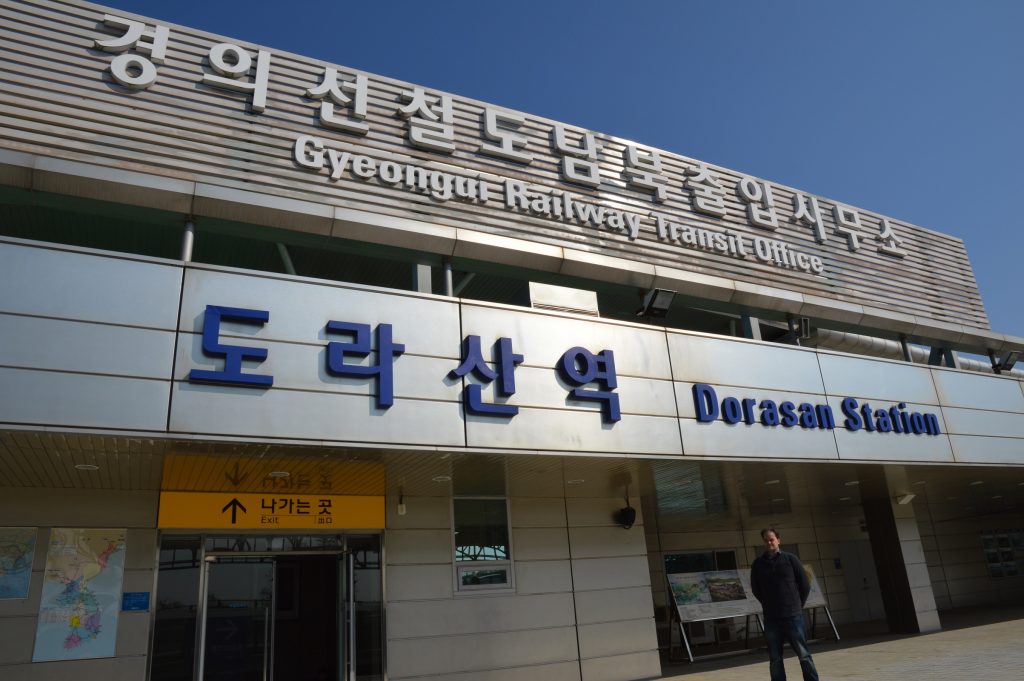 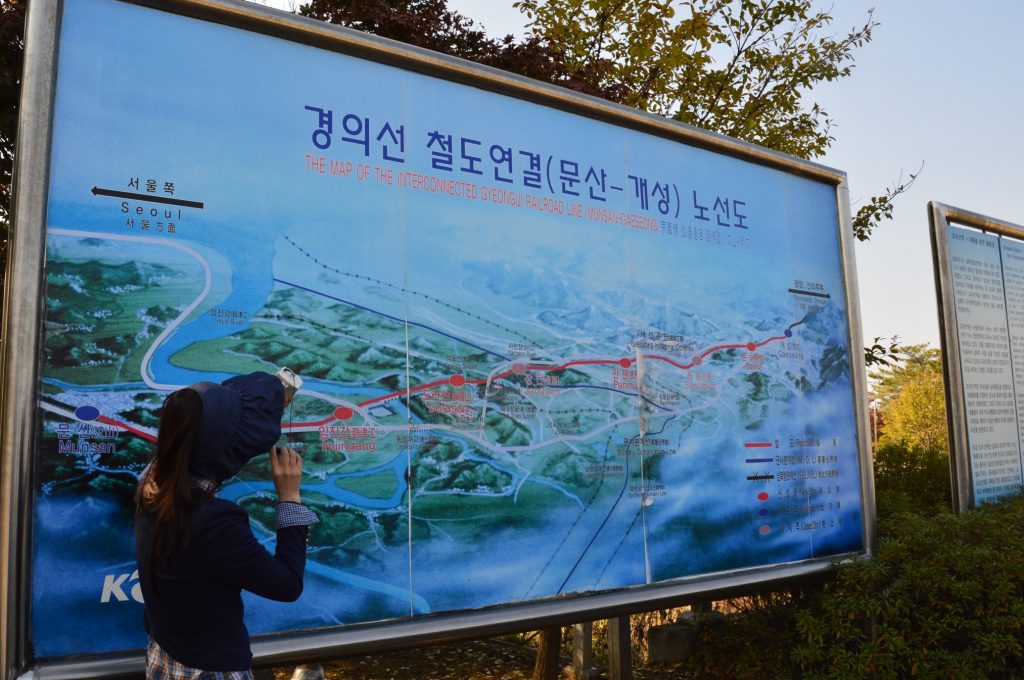 We toured the station which has exhibits promoting reunification donated by Germany, including a piece of the Berlin Wall. We’ve seen pieces of the Wall in other countries before, but never expected to see one here. 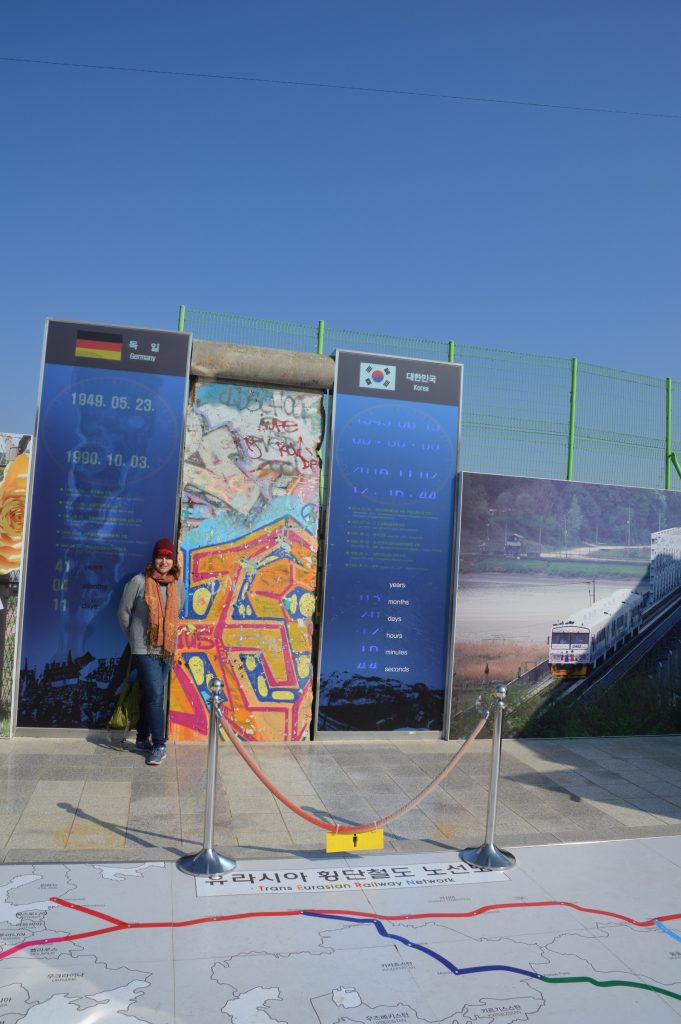 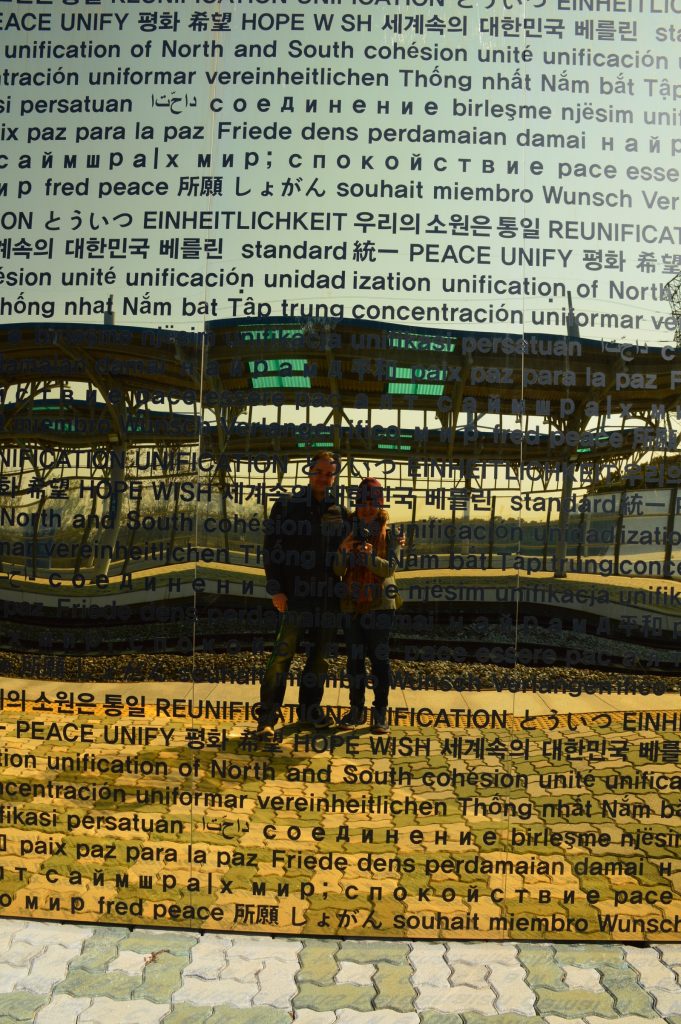 Our second stop was Dora Observatory. Here you can see a sweeping landscape view of the DMZ and a small part of North Korea. We were greeted by a member of the South Korean military who was stationed there who explained more about the conflict, the DMZ, and all of the sites from the observatory. 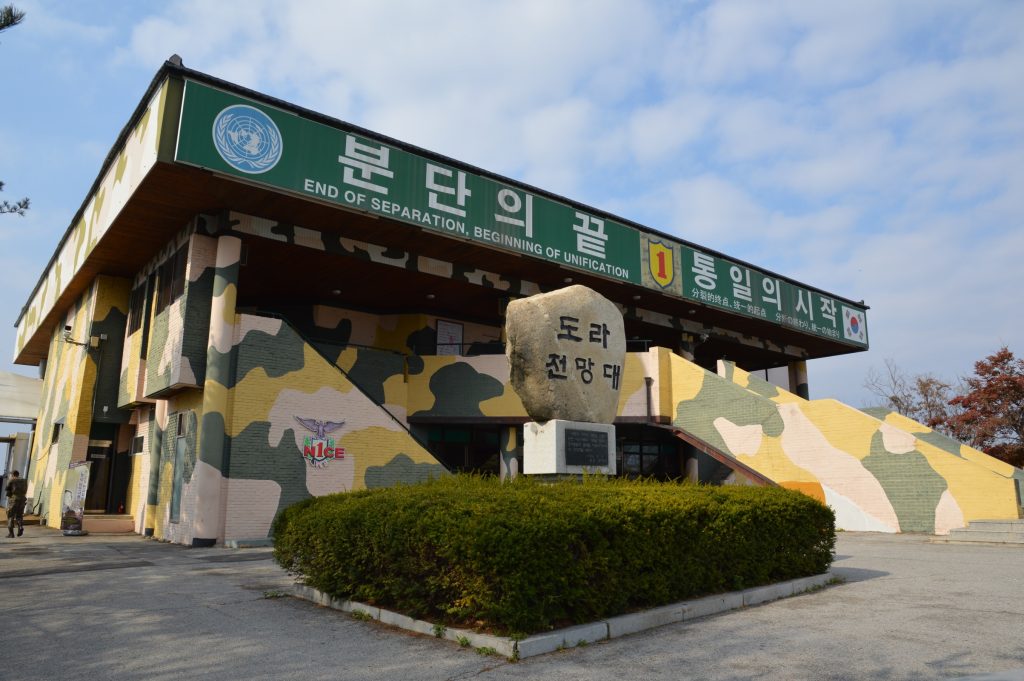 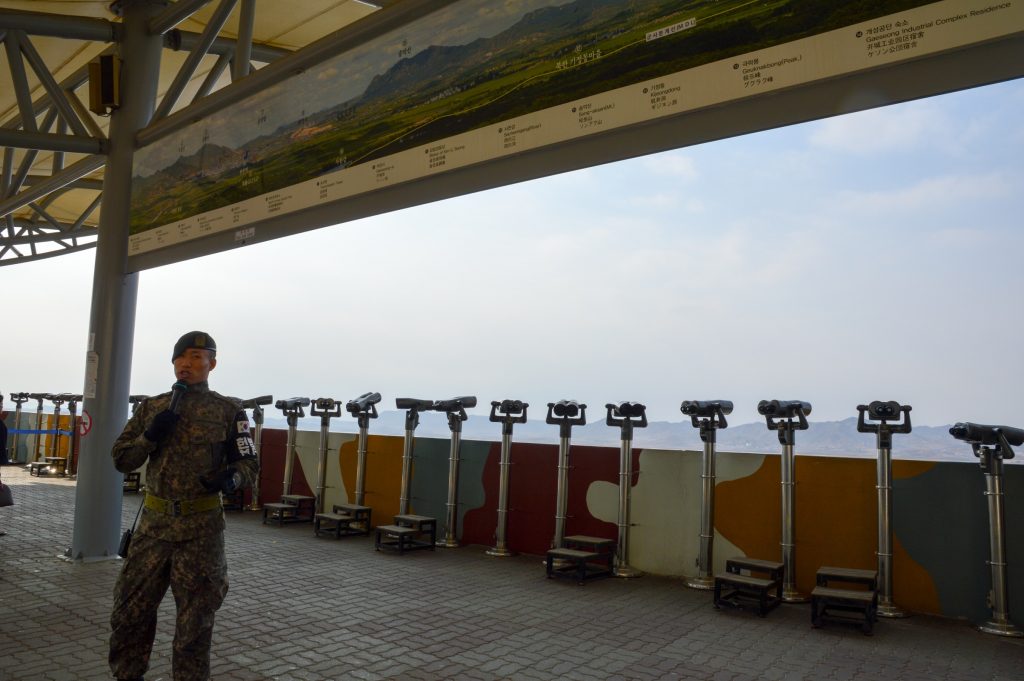 In the picture below you can see the South Korean flagpole in Tae Sung Dong village on the right and the North Korean flagpole in Kijŏngdong further away on the left. Tae Sung Dong is an interesting place. The residents are handsomely compensated to live there given where it is. You can only live there if your family has done so for many years and you must be there a certain (large) number of nights per year. 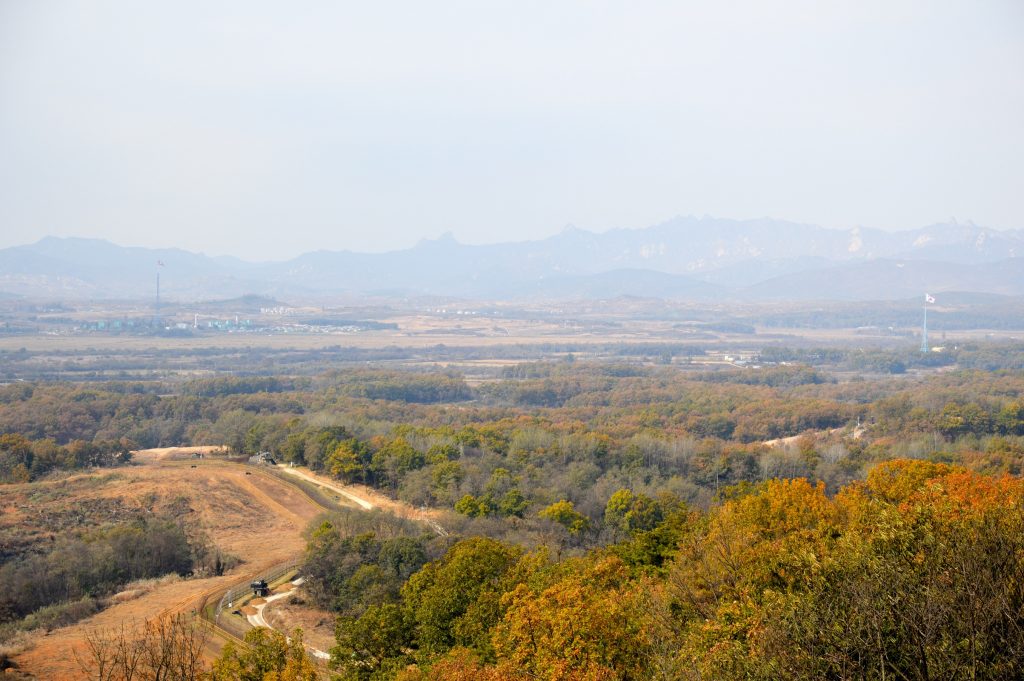 The below picture shows the North Korean flagpole. 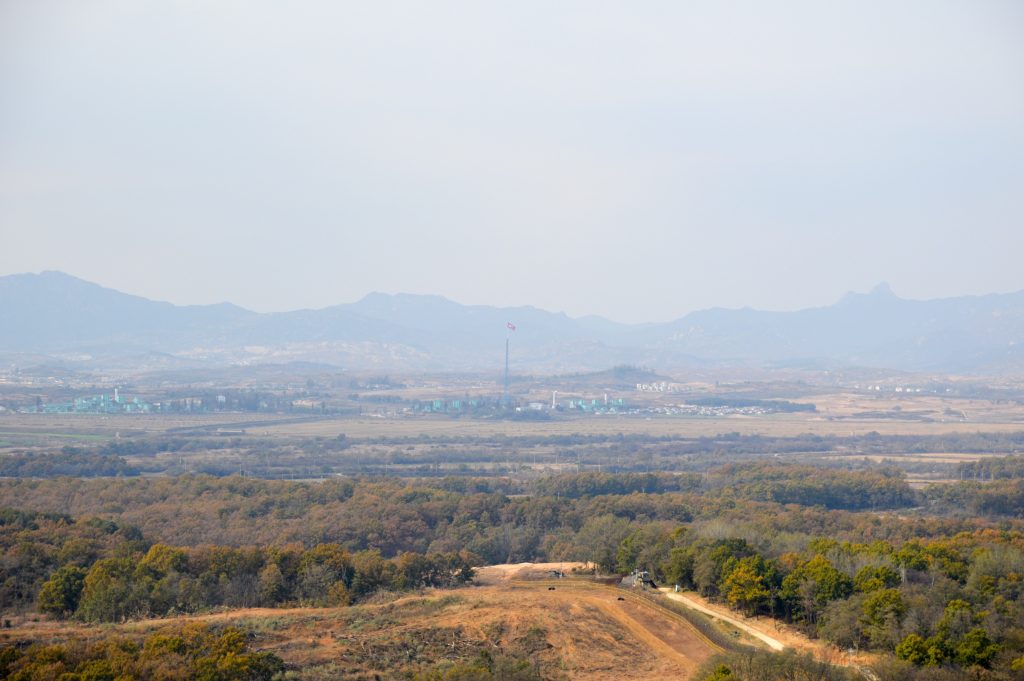 Next, we visited the Third Inflitration Tunnel. To-date, the South Korean government has discovered four tunnels believed to have been built by the North Koreans to launch a sneak attack on Seoul. This tunnel could accommodate 30,000 men per hour. Many more tunnels are suspected. Justin went into the tunnel, while Sarah did not. It’s a long, steep climb back up and you’re not allowed to bring anything into the tunnel (i.e., no portable oxygen concentrator to help Sarah with the climb). There are other things to see in the area around the tunnel, including a lovely garden, a huge DMZ sign, and a small museum. Before you go to the tunnel, you are shown a very propagandized video about reunification. Interestingly, you also learn that the DMZ is a haven for all sorts of animals. 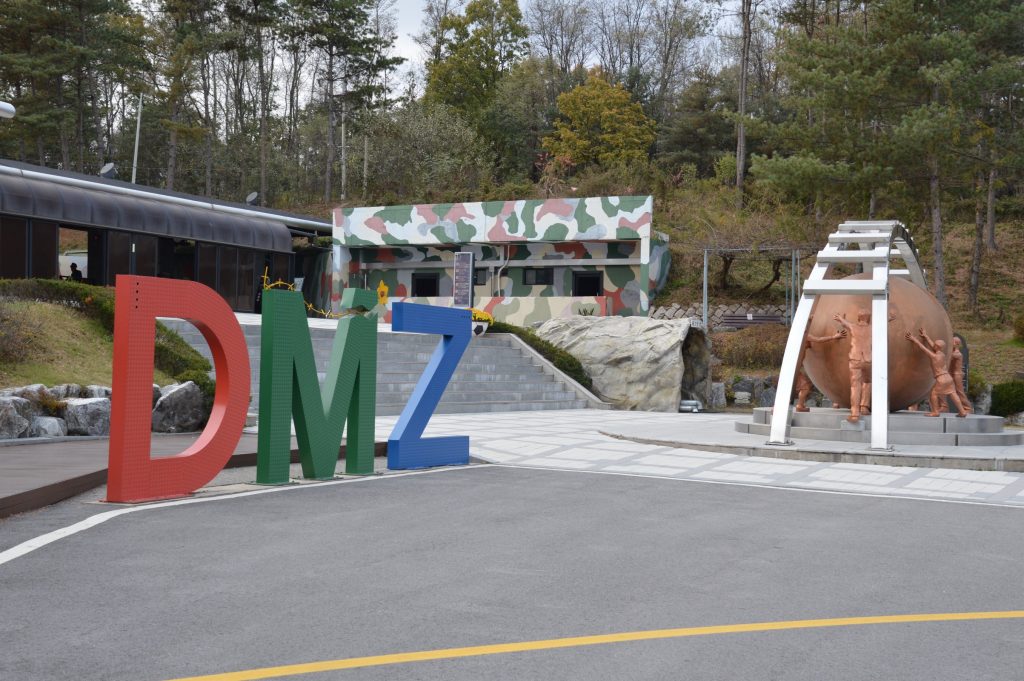 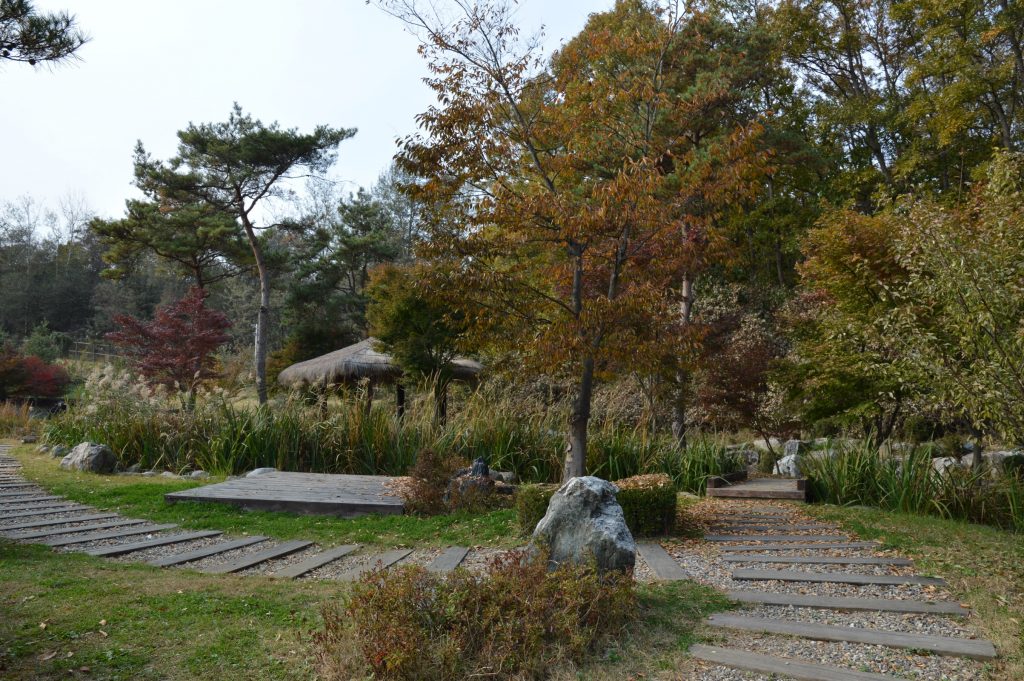 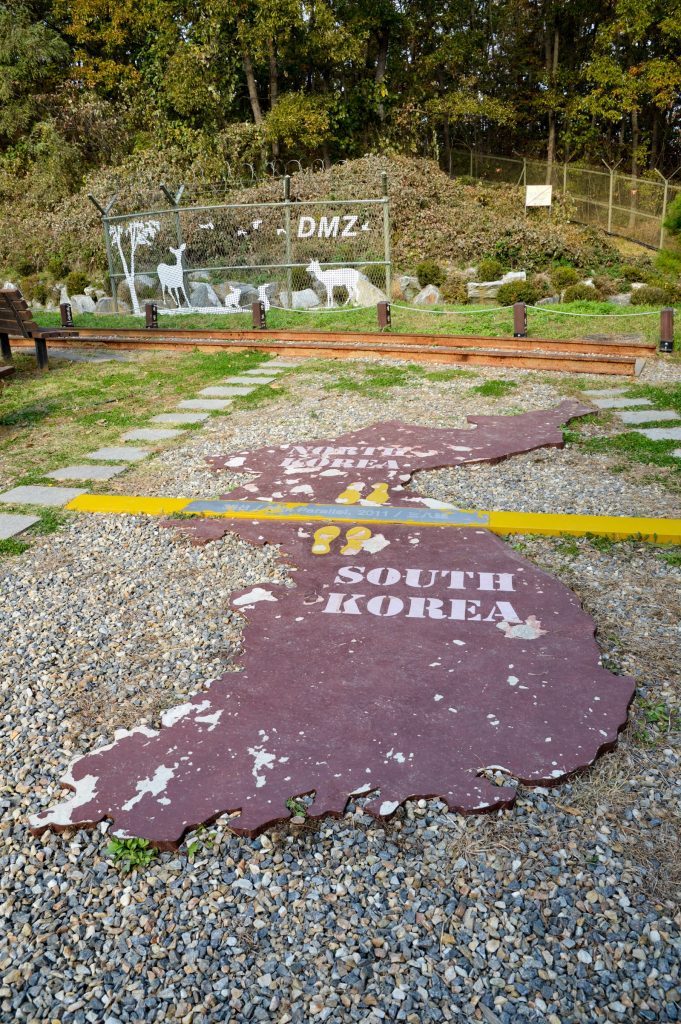 Our last stop was the highlight – the visit to the JSA and a trip to North Korea. Before entering, were met by two members of the US military, one of whom checked our passports while the other standed guard. They briefed us about the JSA and the DMZ and had us sign waivers which included the following statement: “The visit to the Joint Security Area at Panmunjom will entail entry into a hostile area and possibility of injury or death as a direct result of enemy action.” We then boarded a different bus because only specific authorized vehicles are allowed in the JSA. We were told we could not take any photographs unless they explicitly told us we could. Our US military escort/tour guide was from Tennessee and only had a few more months left to his assignment at the JSA. We drove through the DMZ to the Freedom House and the conference rooms. The South Korean Freedom House faces the North Korean Panmun Hall. These buildings and the conference rooms are supposed to be used for official talks. There aren’t many – especially these days. They are heavily guarded by South Korean and North Korean soldies. We were instructed to walk in two single file lines and to not wave or make any hand movements because we would be photographed by the North Korean government and the photographs could be used as propaganda. We were allowed/encouraged to take pictures here (the North Korean guards don’t like being photographed). 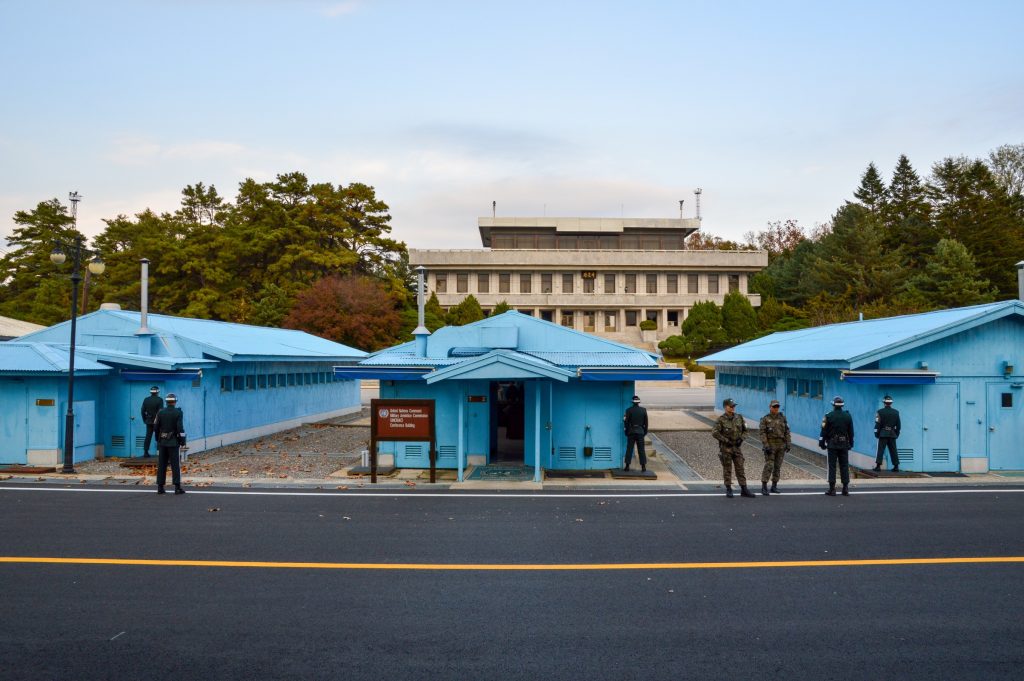 We were led into one of the conference rooms – a small blue building which spanned the border between North and South. We were the first people in our group to go to the other side and step foot into North Korea. There were two South Korean guards inside, completely stone-faced, but happy to be photographed (we think). In total, we spent about 10 minutes in North Korea. It was enough.

Here we are in North Korea! 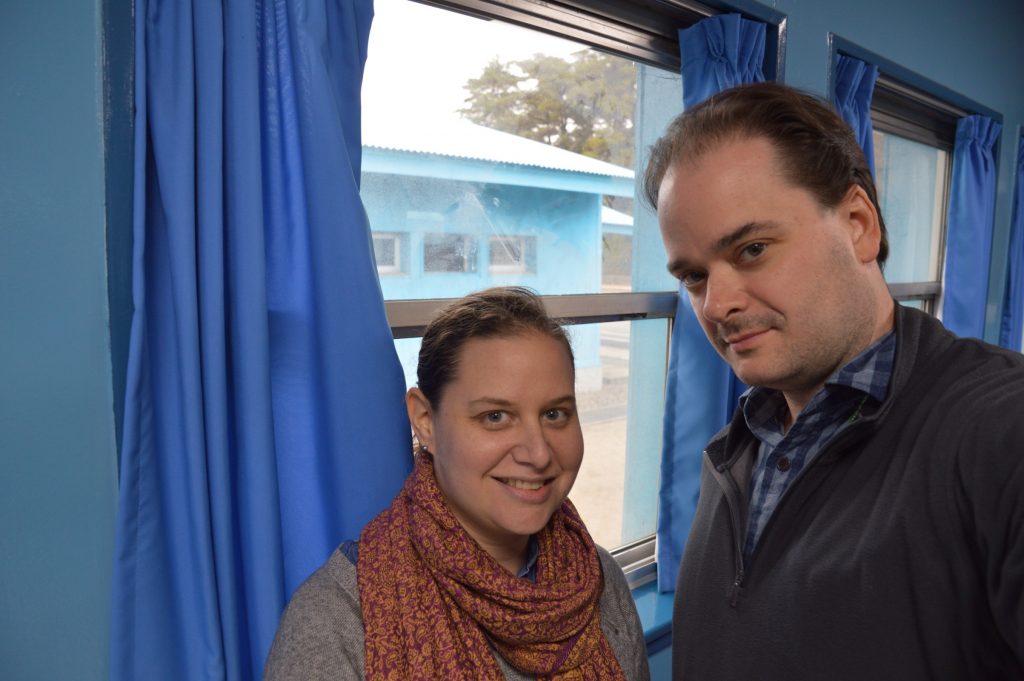 Here a South Korean soldier guards the door to North Korea inside a JSA conference room. You are not allowed to walk behind him because they’ll assume you’re defecting. 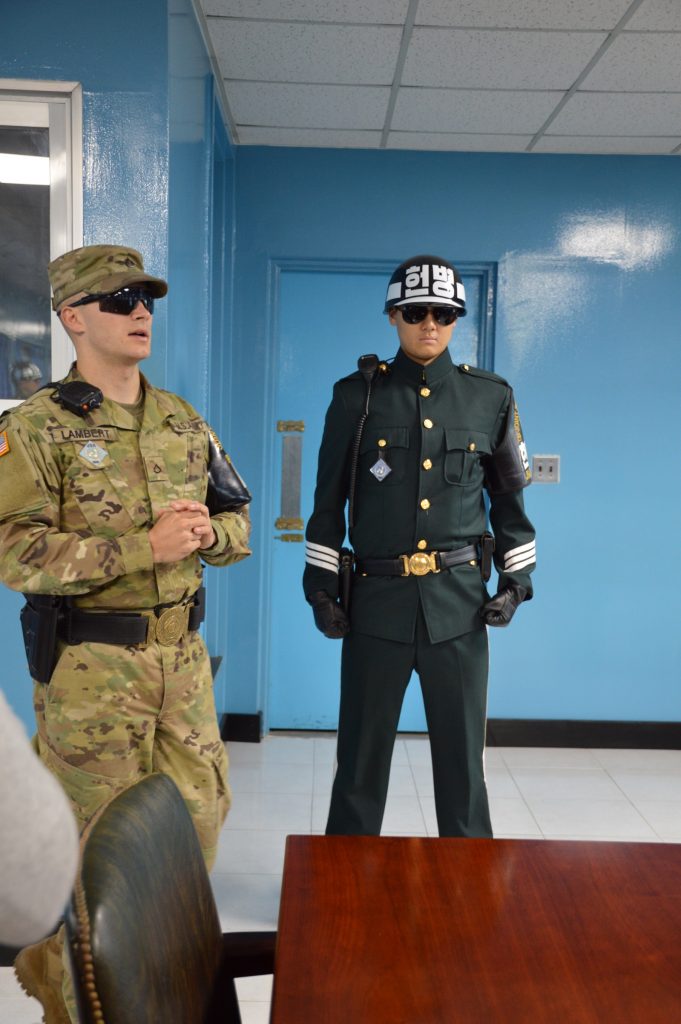 To the guard’s right is South Korea and to his left is North Korea. You are explicitly forbidden from taking pictures facing the South Korean side. 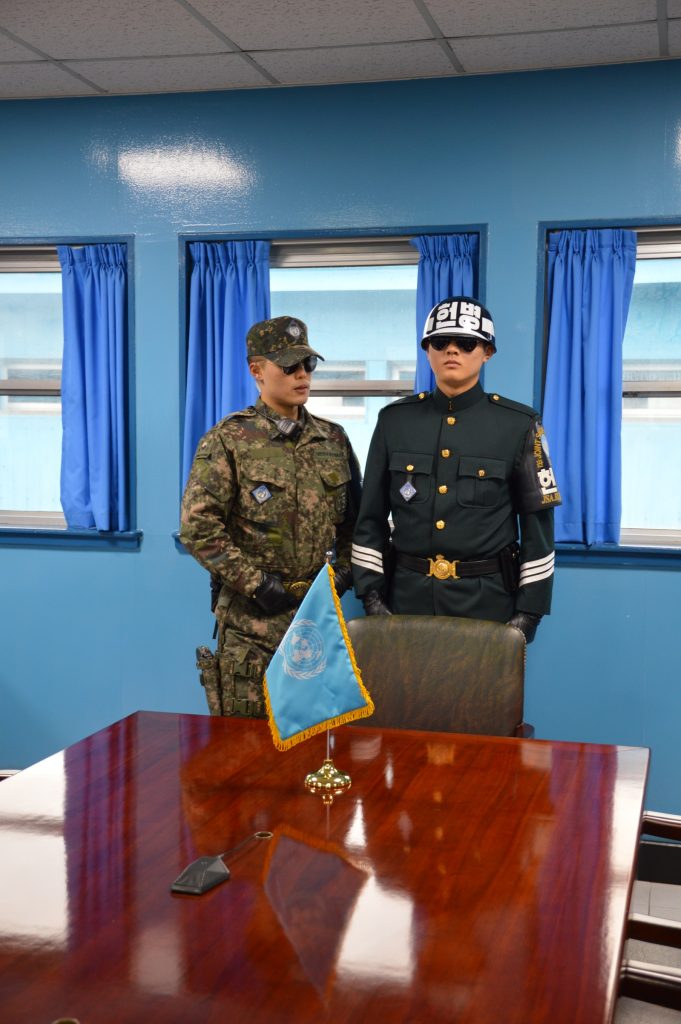 Our tour ended with a stop at the JSA gift shop, a hilariously touristy place. We couldn’t help ourselves and bought a bottle of, assuredly terrible, North Korean wine. 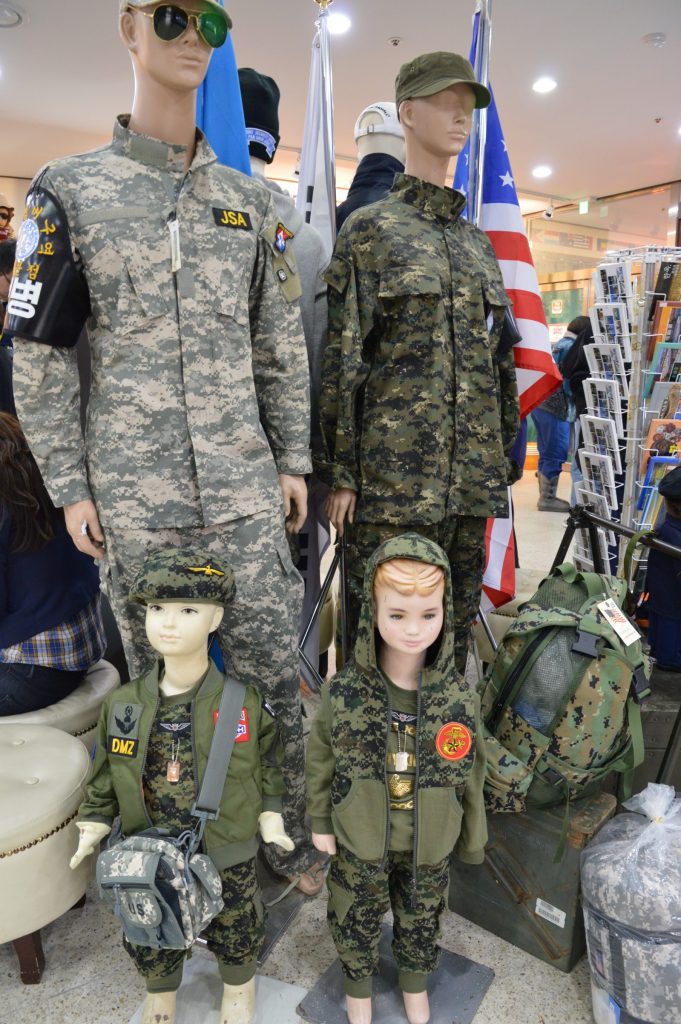 Tips for taking a DMZ tour from Seoul

Planning a visit to Seoul? Read our recommendations for more great things to in Seoul here! 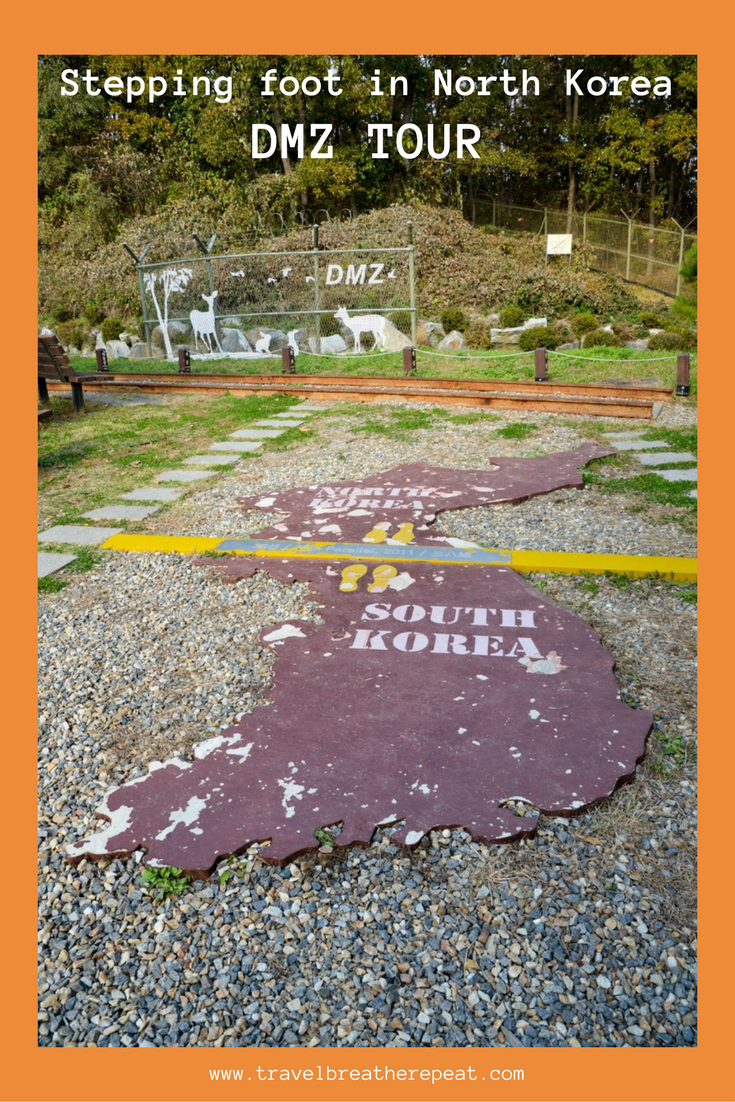