Last Updated on 15th October 2020 by Sarah and Justin

There are a lot of things to see in Krakow. It is the second biggest city in Poland after all. Lucky for us, we had quite a bit of time to spend there during our year-long trip around (some of) the world. It was the first place we settled into for more than a few days and we had a great time exploring the city while coming to grips with the fact that we really were about to spend a whole year traveling together. One week is actually longer than we had ever spent in one place before. As an introduction to slower travel, Krakow was a great choice. Here’s how we spent a week in Krakow including things to do in Krakow and affordable places to eat and drink. Hopefully it inspires you to add the city to any Poland trip you’re planning.

The apartment we stayed in was well-stocked with tourist books and brochures. We typically just wander around a city taking in whatever sights we stumble upon. But one day during this trip, we followed Rick Steves’ self-guided Royal Route walk, which passes by the city’s most historic landmarks. If you only have one day in Krakow, we think this is a pretty good route to follow.

The route starts with the Barbican, a 16th century gate that looks like a small castle. It even has a drawbridge and a moat! Next you’ll pass under Florian’s Gate. Built in the 14th century, it’s like the official start of the old town. You can climb it and walk along the medieval city walls to the three other still-standing Gothic gates in the city. 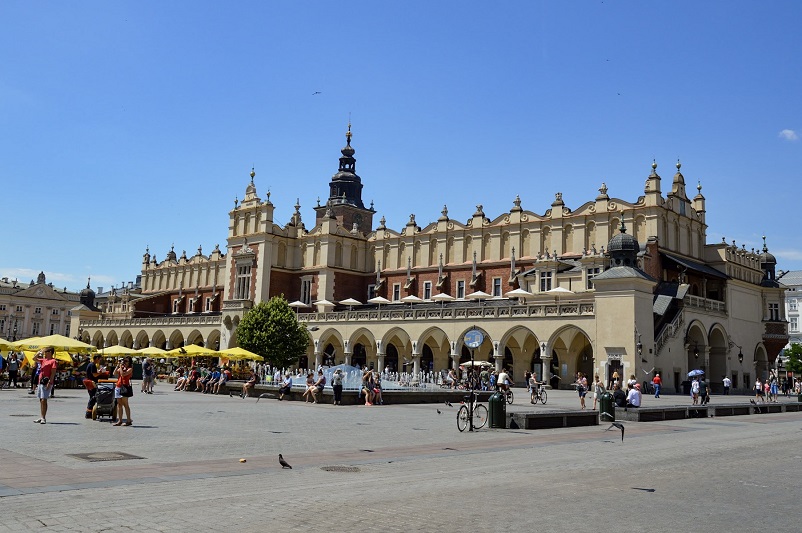 Walking along the small street from Florian’s Gate, you’ll eventually come to Main Market Square. It’s one of the largest medieval town squares in Europe. When we were there it was bustling, but not too overcrowded. On one corner stands St. Mary’s Basilica, originally built in the 14th century. You can admire from the outside (like we did), take a tour, or climb its tower to see beautiful views of the city. The centerpiece of the square is one of the city’s most well-known landmarks, Cloth Hall. It was originally built in the 15th century to support the bustling trade center that was Krakow. It fell into disrepair for several centuries, but was restored in the 19th century. There were some great sculptures in Main Market Square as well. Some traditional like the one of Adam Mickiewicz, some whimsical like the one of the goat, and some modern and severe like the big head. 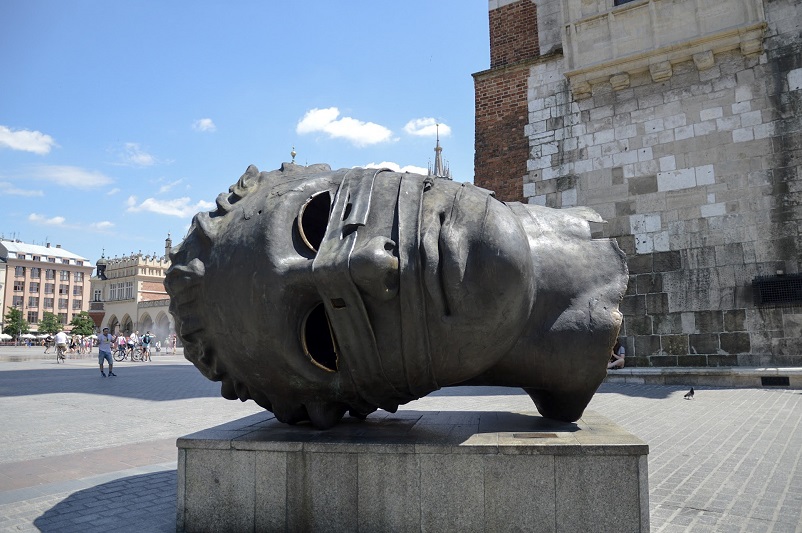 Church of Saints Peter and Paul 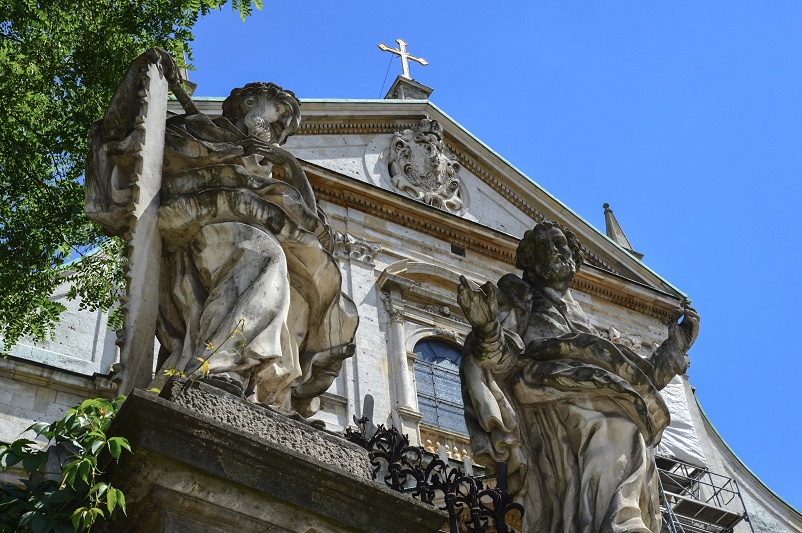 Further along the Royal Route, we were treated to one of Sarah’s favorite church so far, the Church of Saints Peter and Paul. Its style was different from the other churches in Krakow. It was a much simpler structure, but had beautiful sculptures standing in front of it. 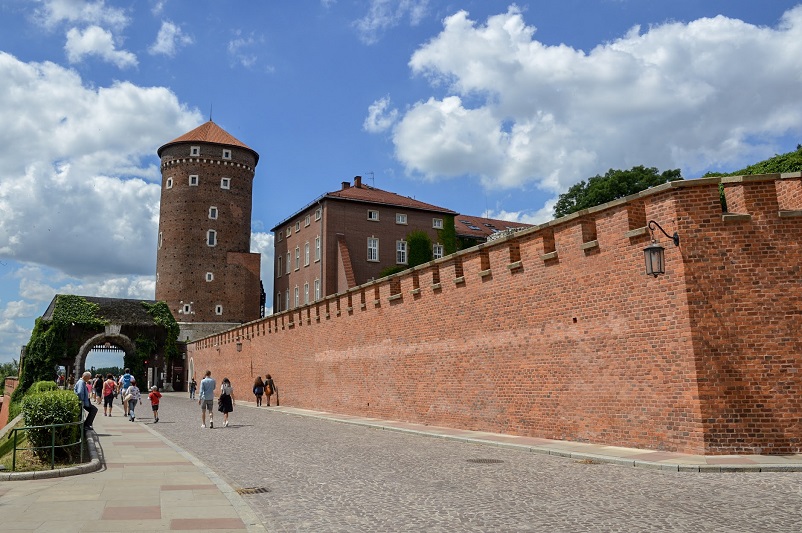 The route finishes with Wawel Castle, which we think is an absolute must-see while visiting Krakow. We actually decided to tackle it on a different day when we had a little more time and when we thought we could get a good deal. We went on a Monday, when some of the exhibits are free, but unfortunately got there too late and there were no more tickets (we’re not sure when you need to get there, but assume close to opening time which is 9:30). Everything there is so beautiful – the grounds, the buildings, the views, everything! – we were happy enough to just walk around the grounds and admire things from the outside. 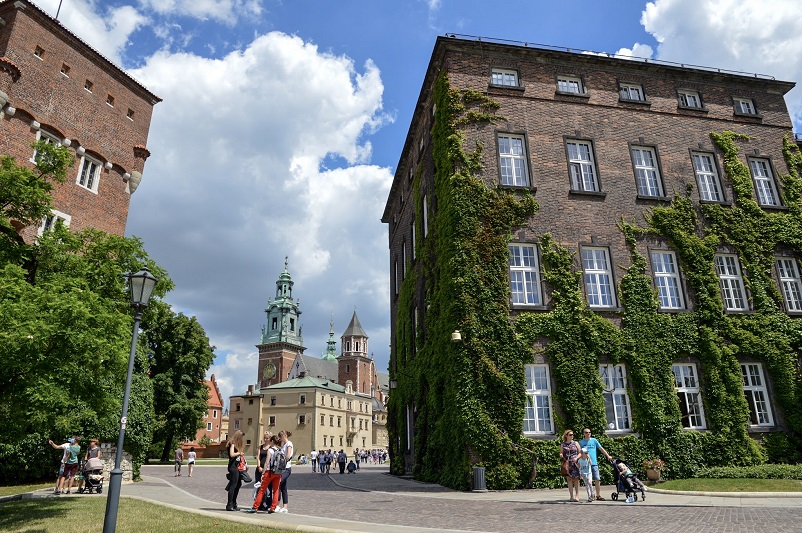 Wawel Castle is on Wawel Hill, a location that has been important to the region for quite some time. A castle on the hill dates back to the 11th century. Due to fires and reconstructions, there have been different iterations of castles over the years. The palace from the Renaissance era still survives. The walk to the castle, though up a hill, was pretty manageable climb. It’s well-paved and has a relatively gentle gradient. Sarah did the walk without her oxygen – albeit slowly and with breaks. 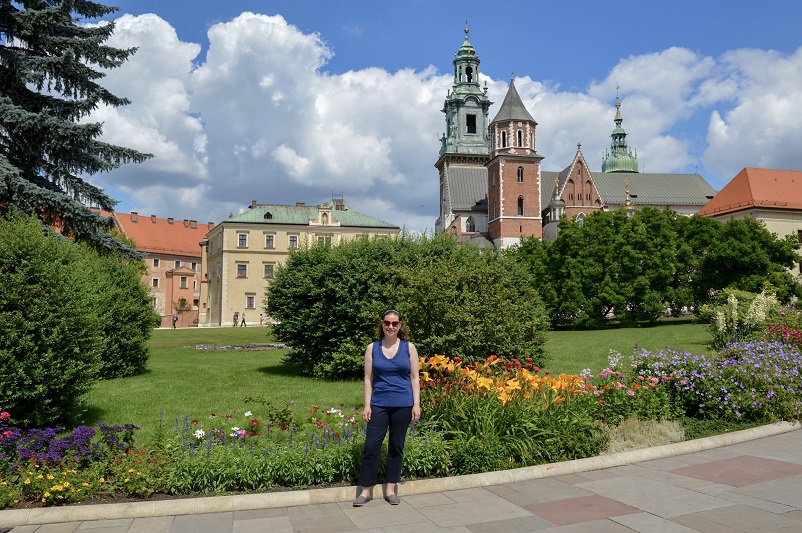 We paid 3 PLN ($0.75 today) each to go down into the “Dragon’s Den” – a cave that surfaces at a dragon statue that’s fun and quite popular with children. It was just a small cave, and probably not something we’d recommend doing. But the fire-breathing dragon (Smok Wawelski) is free for all. Dracarys! 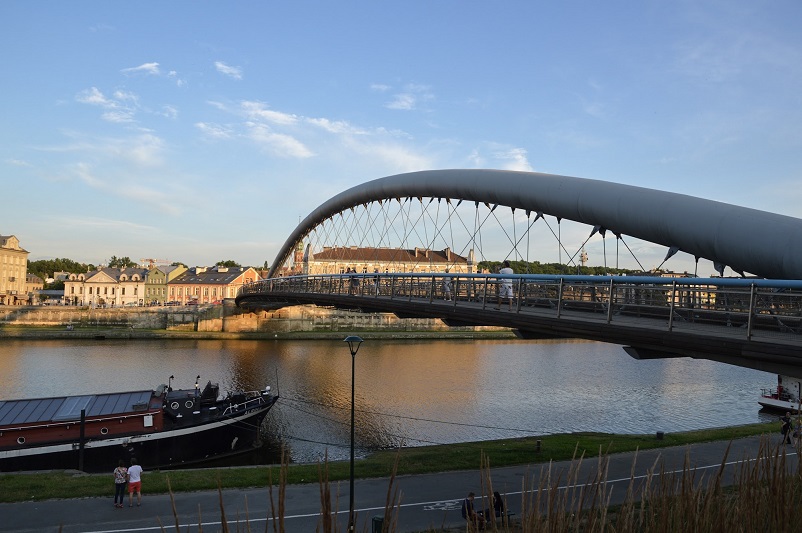 During our week in Krakow, we stayed in an apartment in the Podgórze neighborhood, which is just south of trendy Kazimierz. The two neighborhoods are connected by the cool pedestrian bridge (Kladka Ojca Bernatka) pictured above. Our apartment was really lovely, so we’d probably be partial to whatever neighborhood it was in, but we really did like Podgórze. It was less busy than Kazimierz and seemed less touristy, but was still well-connected. 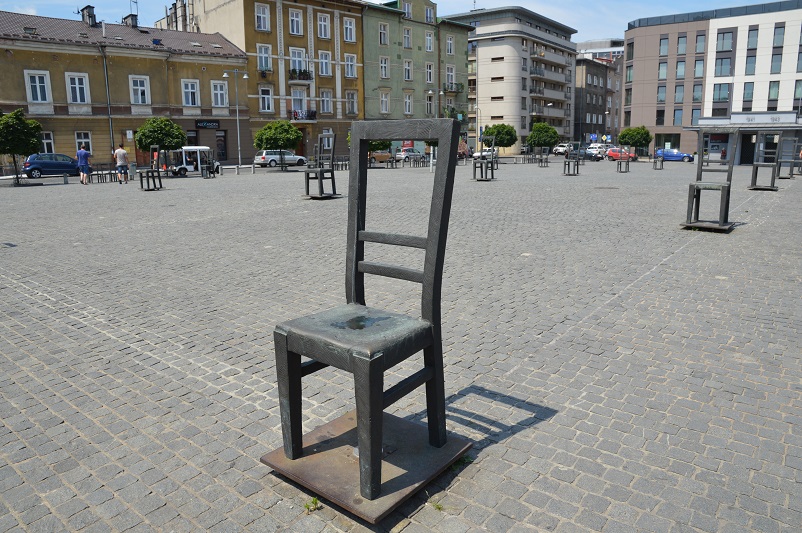 The Jewish ghetto in Krakow was also in Podgórze. We visited the memorial sites: Ghetto Heroes Square (Plac Bohaterów Getta) and the last remaining portion of the Ghetto wall. The whole experience of seeing these places and trying to imagine what it must have been like back then was quite moving. The chairs in Ghetto Heroes Square were especially powerful. Schindler’s factory is also nearby. We took a long walk through the neighborhood and took a look at it. 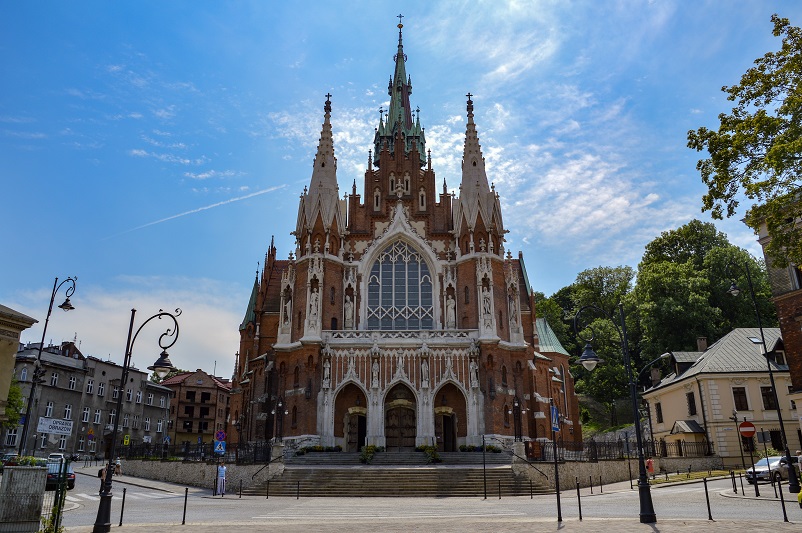 Our favorite spot in Podgórze, however, was a church. We came across the beautiful St. Joseph’s Church on one of our walks and spent quite a while admiring its neo-Gothic architecture. We also popped into the butcher on a street next to it to buy our dinner!

Enjoying the outdoors in Krakow 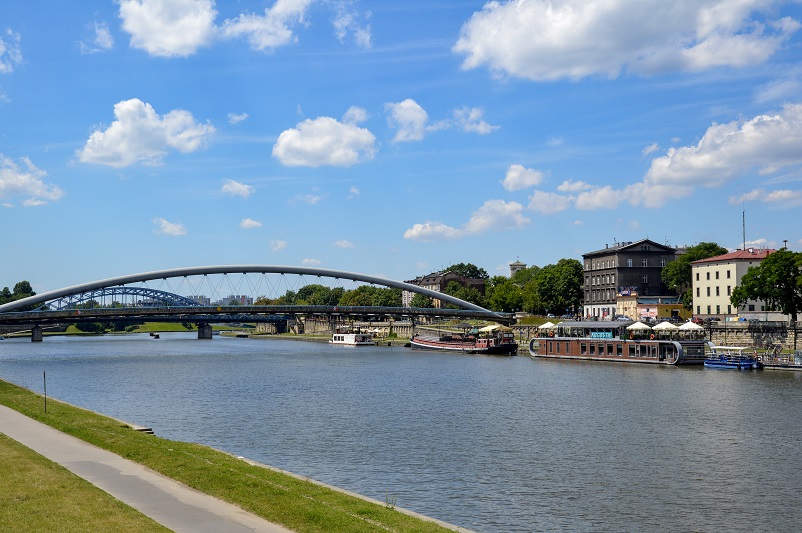 Krakow is situated on the Vistula River. You can enjoy it from many different points throughout the city. There are nicely paved running and biking paths and stairs and ramps leading down. It’s a great place to get some exercise or just hang out, and you can see some lovely views of it from one of the city’s bridges. 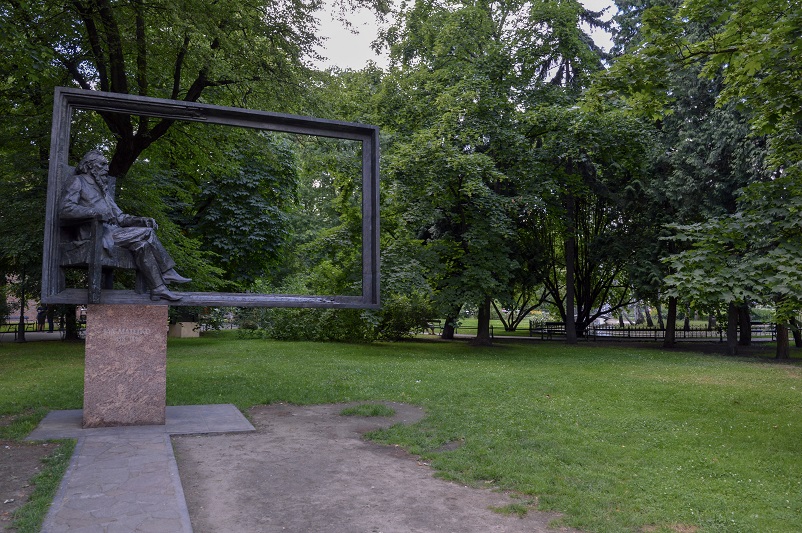 Planty is a close second when it comes to outdoor awesomeness. This aptly-named park surrounds the old town and is a really nice place to take a stroll with its well-maintained paths and sculptures.

Visiting the Salt Mine from Krakow 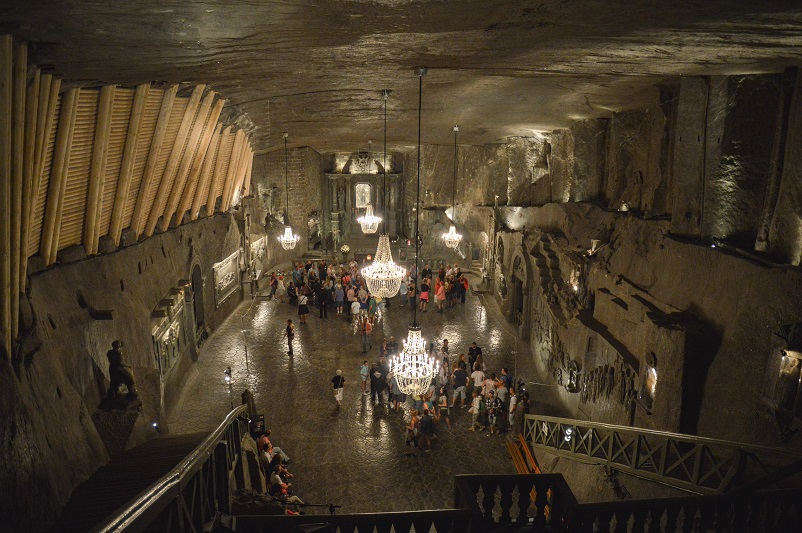 We did another pretty touristy thing while in Krakow and went to the Wieliczka Salt Mine (Kopalni Soli Wieliczka). We took a 20-minute public bus outside the city and then waited on line for another 20 minutes (our timing was fortuitous… sometimes you can wait up to an hour) to join an English-language tour of the mine. We went on the hottest day of the week, so it was a delight to roam around 100+ meters underground where it was cool. The mine is not for the claustrophobic. Upon entering, one must climb down 350 stairs in a very small wooden stairwell (we are very good at finding stairs that descend). Once there, the guide takes you on a tour of three levels of the mine (there are 17 levels), through winding routes showing off sculptures made by famous artists as well as miners themselves. You end up climbing down a total of 800 stairs and ~135 meters. We enjoyed it, but if you’re only in Krakow for a few days and are not a mine enthusiast, it’s not a must-do. 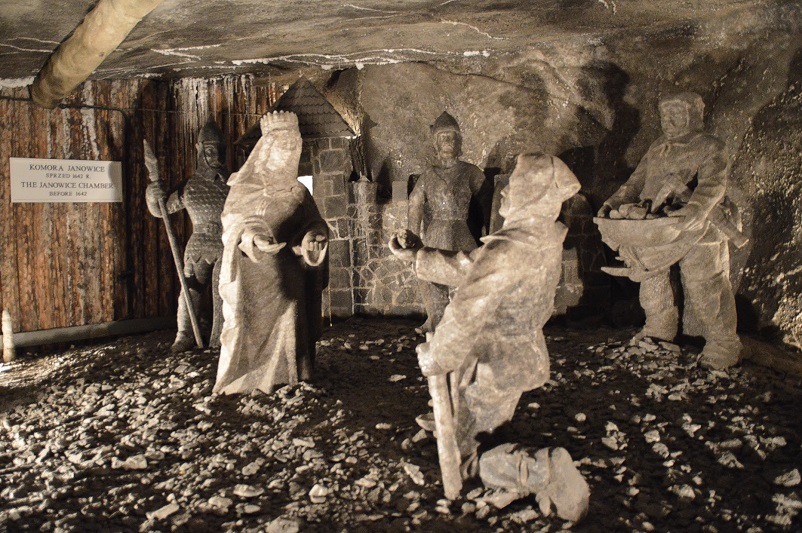 With a great kitchen in our apartment, we cooked a lot. Yay for fresh vegetables! The supermarkets in Krakow were prima. But we did enjoy a few good meals and beers out. 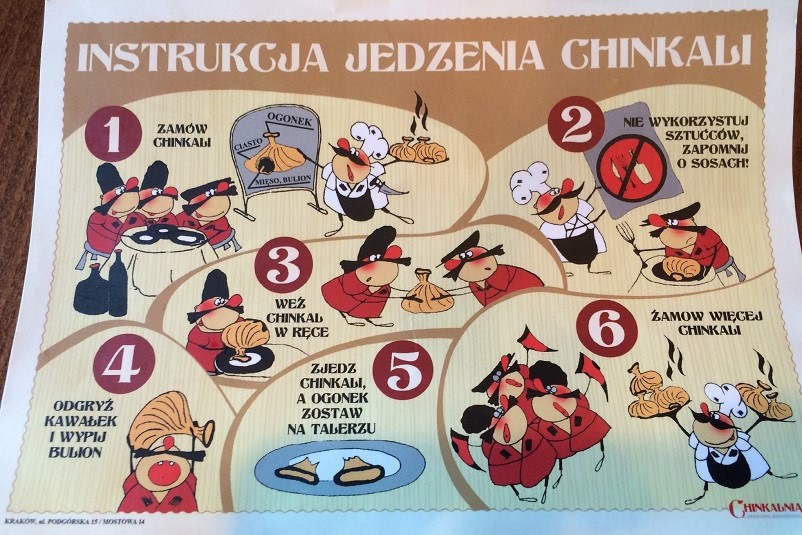 We ate dinner out once – at a Georgian restaurant called Chinkalnia Kraków. We were lured in by their khinkali (meaty soup dumplings) – and luckily the restaurant provided detailed instructions on how to eat them. 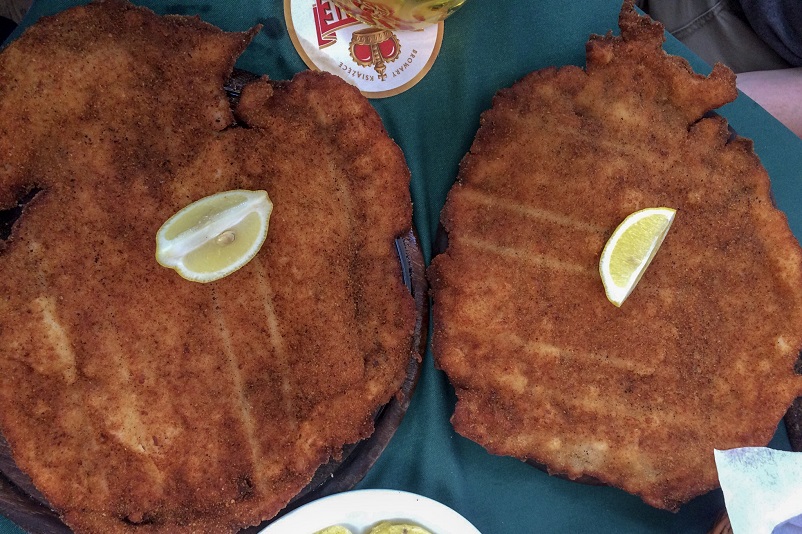 We treated ourselves to an enormous (and admittedly a bit touristy) lunch after our visit to Wawel Castle. Pod Wawelem is right at the bottom of the hill. The day we went they had a special on schnitzel and beer so we had to indulge. It’s known for its huge portions and we weren’t disappointed. With the special, a .4L of beer only cost $0.75!

We went to milk bars twice for delicious, cheap lunches and enjoyed pirogis, pancakes with broccoli, and zurek (a traditional Polish soup). Our favorite milk bar in Krakow was called Krakus in the Podgórze neighborhood.

Sarah had super tasty salted caramel ice cream at this small shop. We went to the one in the middle of Kazimierz, but in searching Google Maps there are others throughout the city. It’s quite popular, so be prepared to wait in line, especially on a hot day.

In the same square in Kazimierz, we also enjoyed local craft beer at the small but great Ursa Maior. We tried the strong ale and the barley wine. Both were excellent. We also conducted our very own a proper Polish porter taste test (you can find wonderful things in the supermarket). Out of the two we tried, the one from Browar Okocim unanimously won.
<< Read next Where to drink Polish craft beer in Wroclaw >>

Krakow was pretty flat all around. It was great for Sarah who hates when surprise hills get in the way of a delightful stroll. Public transportation was easy to figure out and inexpensive. Trams and buses cover the city well and there are ticket machines at most stops and on most vehicles. Before arriving, Sarah asked our Airbnb host how to take public transportation to the apartment from the central train station. Clearly not knowing who he was dealing with, he recommended a taxi. A taxi! At the time, a tram costing 2.80 PLN ($0.70 today) each took us right around the corner from the apartment. When we were traveling in Krakow in 2016, Google Maps didn’t yet have public transportation routes, but Sarah found this website which is super easy to use.

2 thoughts on “One week in Kraków”