We love cities. We love taking public transportation and wandering around new streets and people watching and finding new things to eat. So that’s what we did in Seoul. Is this blog getting boring because that’s what we do most everywhere? If yes, sorry, but that’s who we are and what we do.

We arrived via KTX train from Busan and easily found our apartment after a quick trip on one of Seoul’s easy and clean subways. Also note, they are much more accessible than those in Busan. We stayed in Mapodong, a neighborhood that doesn’t really have much written about it, but is pretty central and has access to lots of transportation. We also found out later that it’s known for its Korean BBQ. We had a great view of huge, glittery gold buildings. 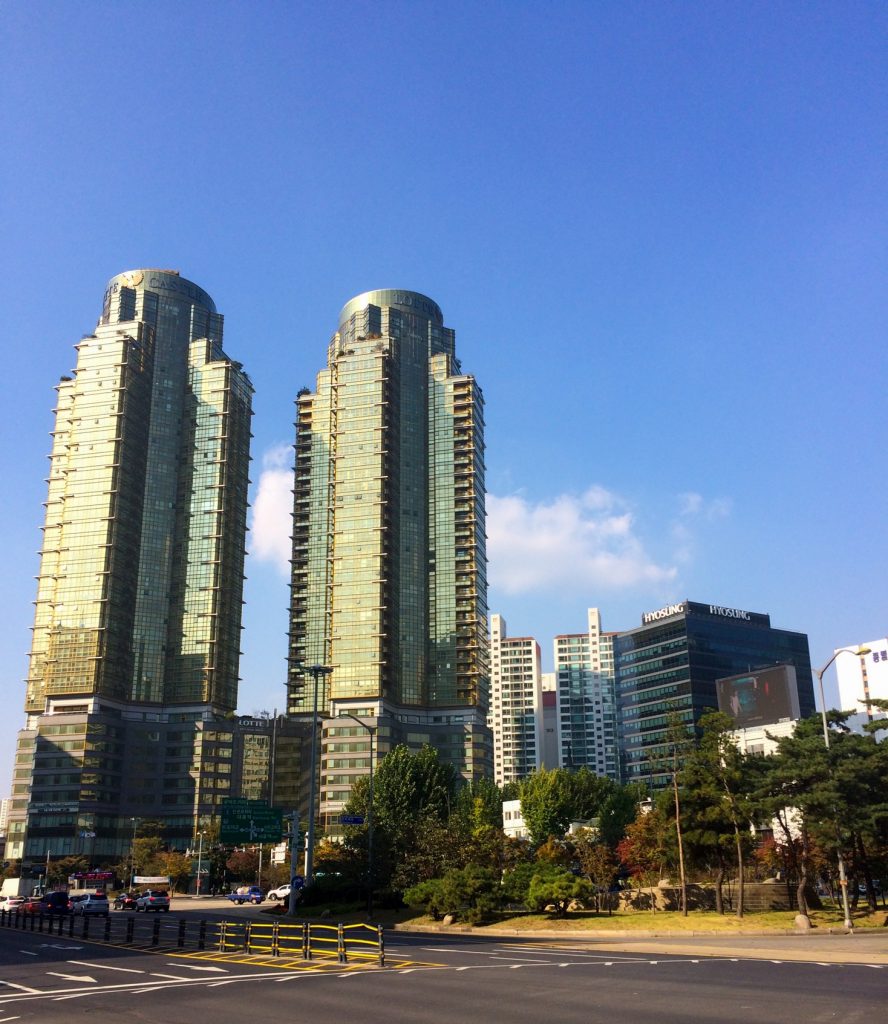 There was also this cool sculpture. Gold is a popular color in Seoul. 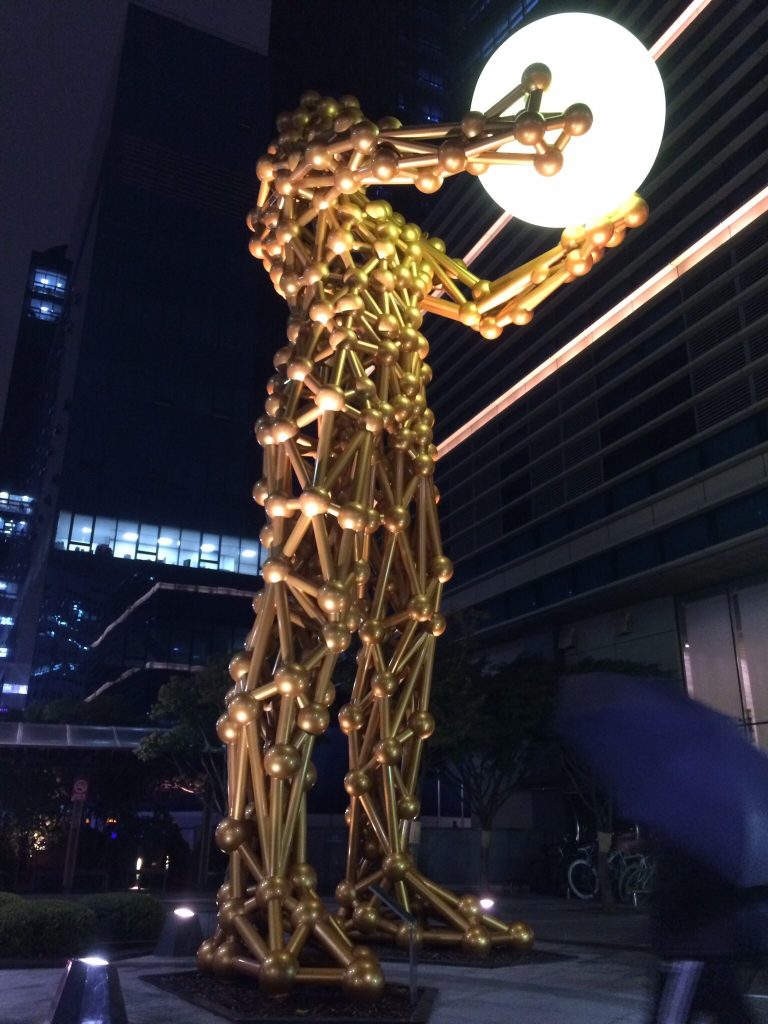 Seoul is busy and fun and beautiful and really really cool. But it’s also really big and there are a ton of distinct neighborhoods. We tried our best to see and do as much as we could but we definitely could have used more time. And sadly, we didn’t make it to Gangnam as much as we wanted to sing and dance Gangnam Style (full disclosure, we did watch the Gangnam Style video while in Seoul). Here’s what we did do and would recommend…

The permanent collection of the National Museum is free and has some interesting pieces. The building is pretty cool. But its the surrounding grounds and Yongsan Family Park that make this a must-do. It’s beautiful, especially during Fall when the colors are changing. Note, there is a huge military base north of the museum and it kind of looks like a park on Google maps but it’s impenetrable. Don’t make the same mistake we did (resulting in a really long walk) and just follow directions to the museum. 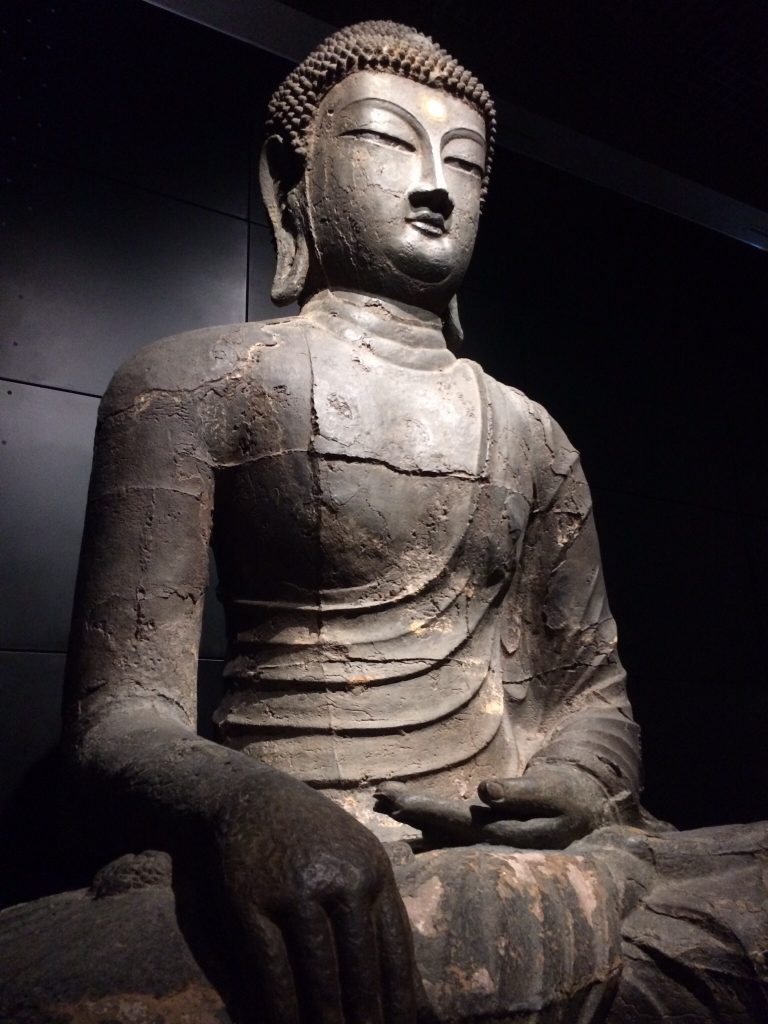 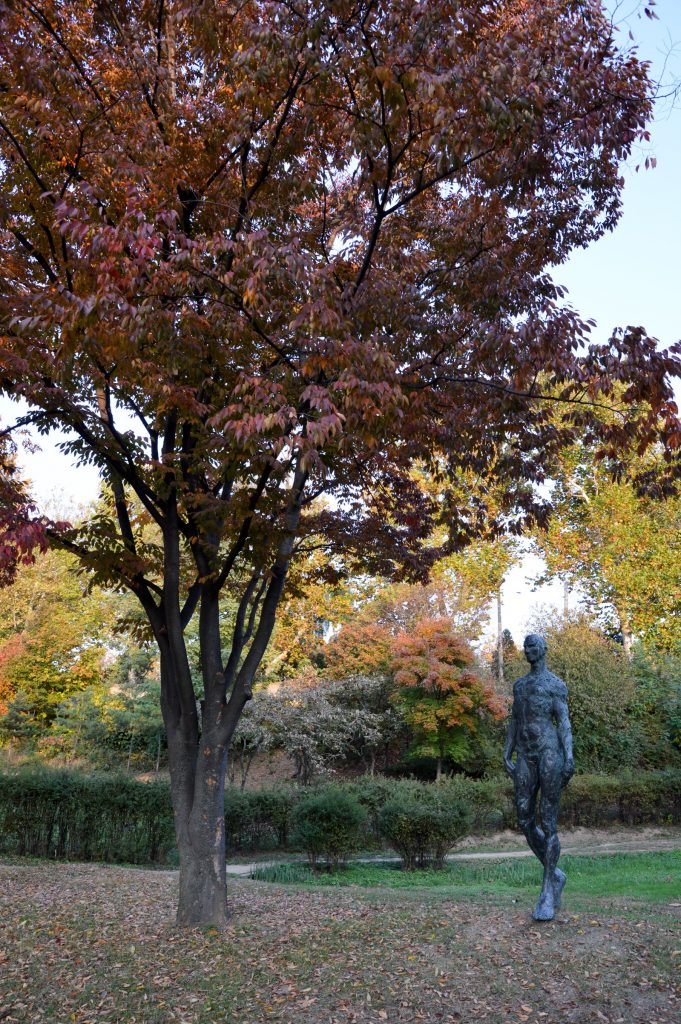 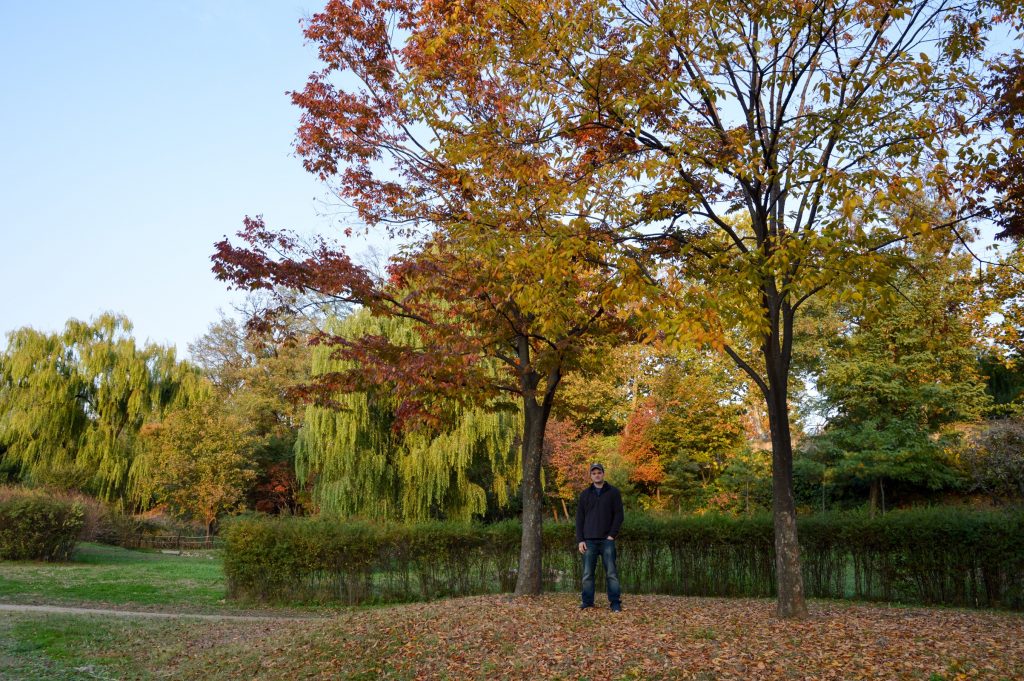 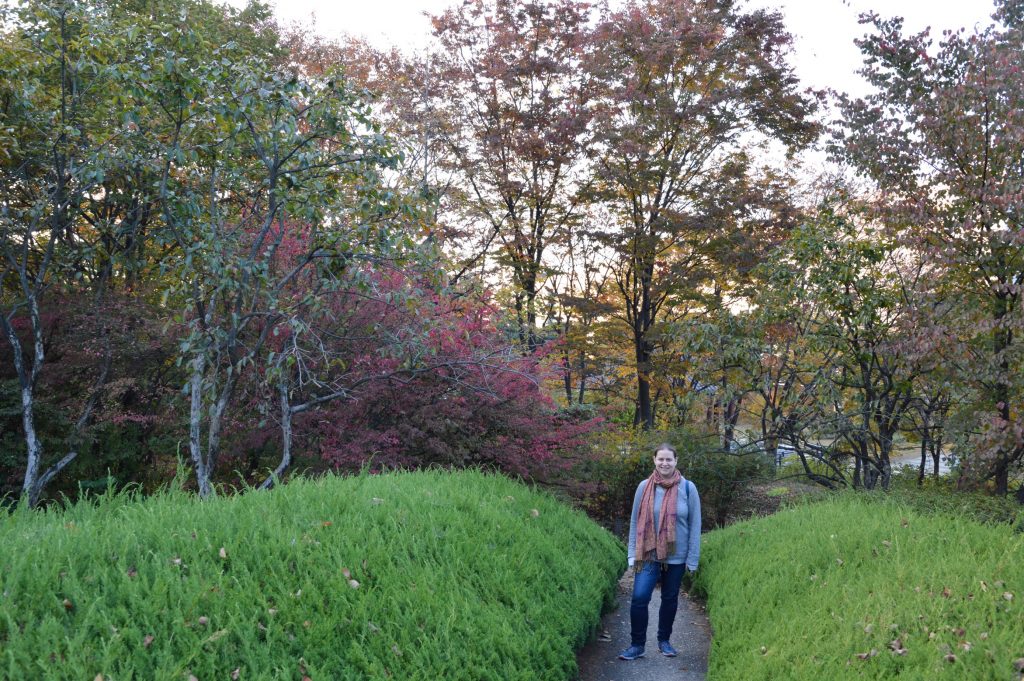 The Changdeokgung Palace grounds and buildings are impressive, but what makes this place special is its spectacular garden, Huwon (aka Secret Garden). It’s massive and wild and beautiful with so many trees and pagodas and water and paths. It’s a truly lovely place to wander during a crisp Autumn afternoon. Tip: you have to buy a ticket that’s timed with a tour, but you don’t have to join the tour (which is 2 hours). Instead you can wander by yourself. 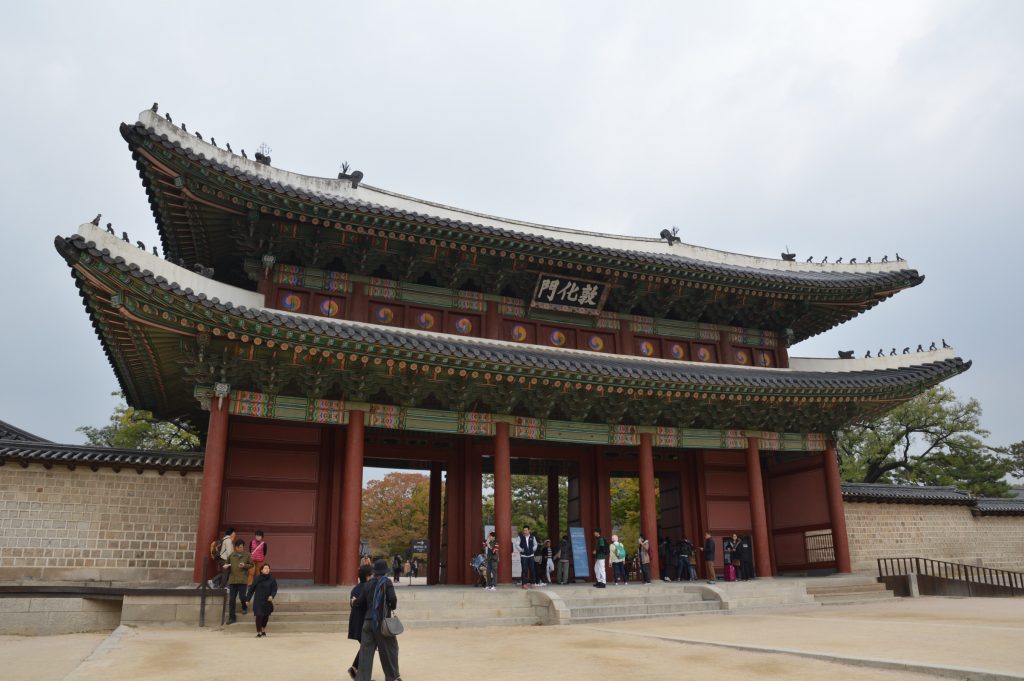 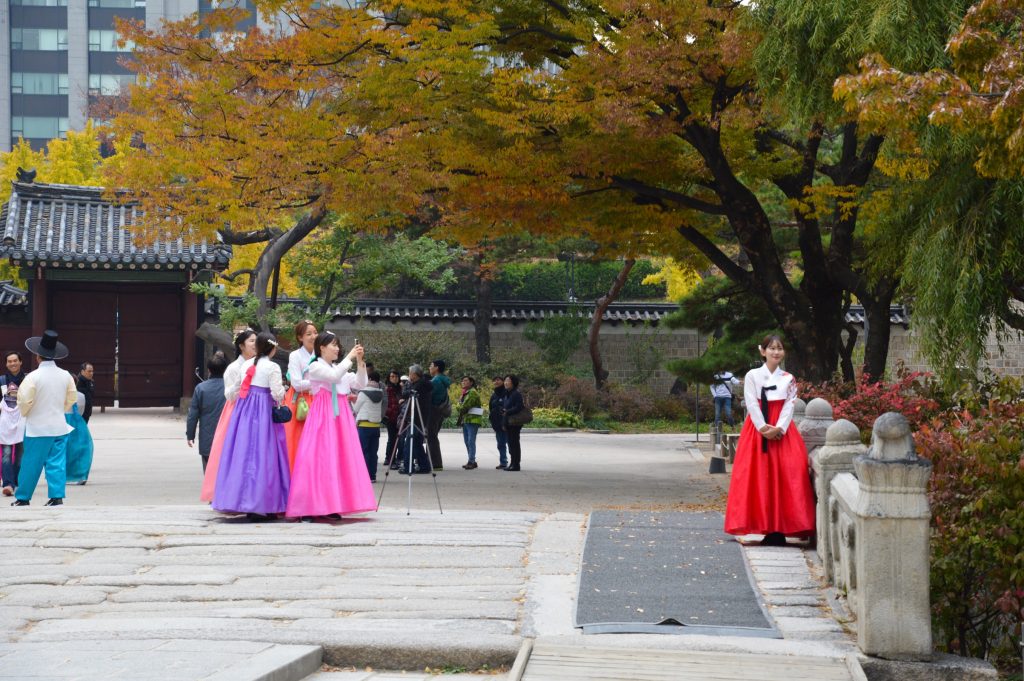 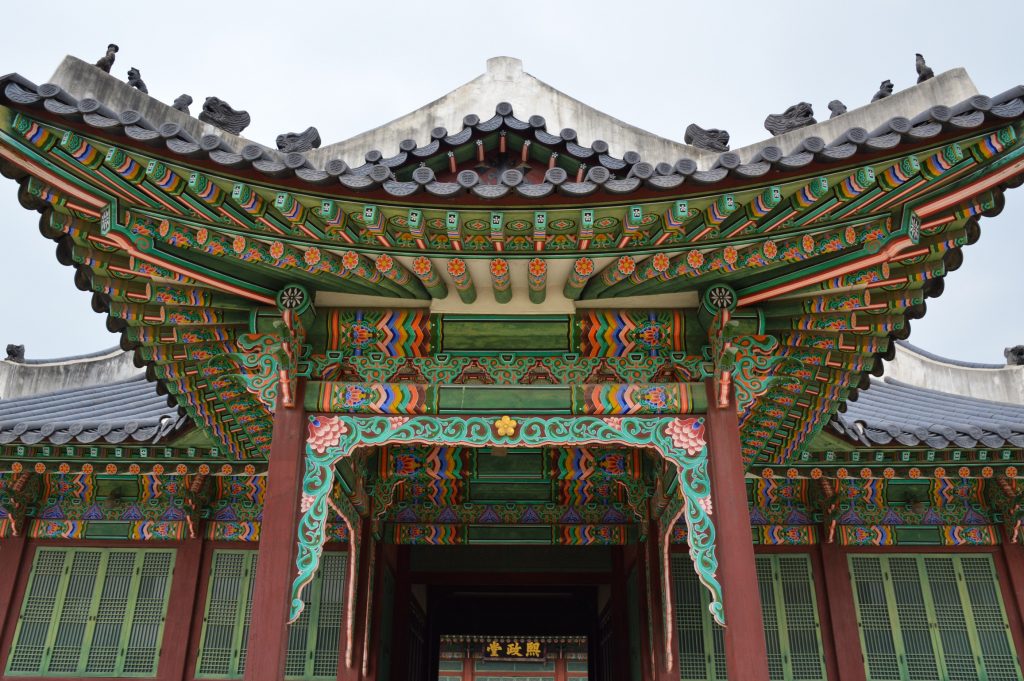 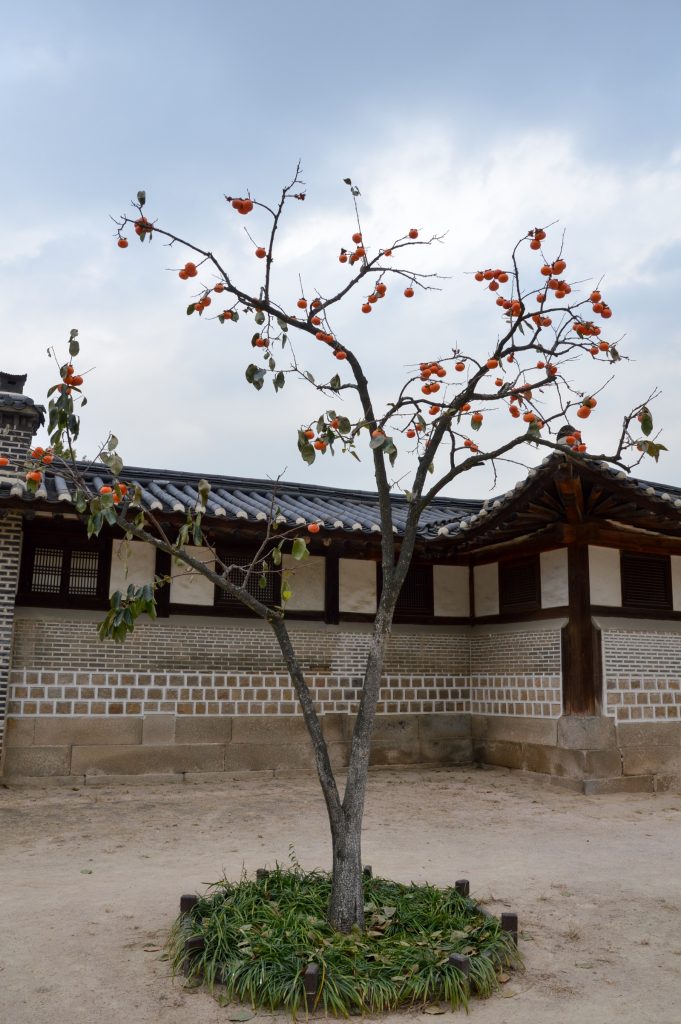 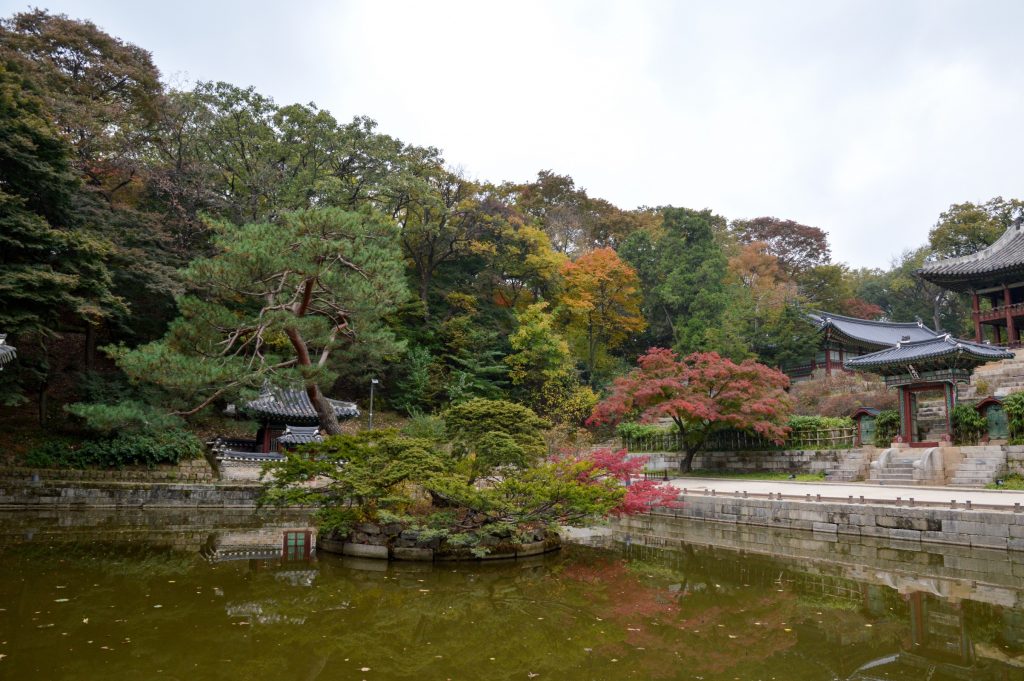 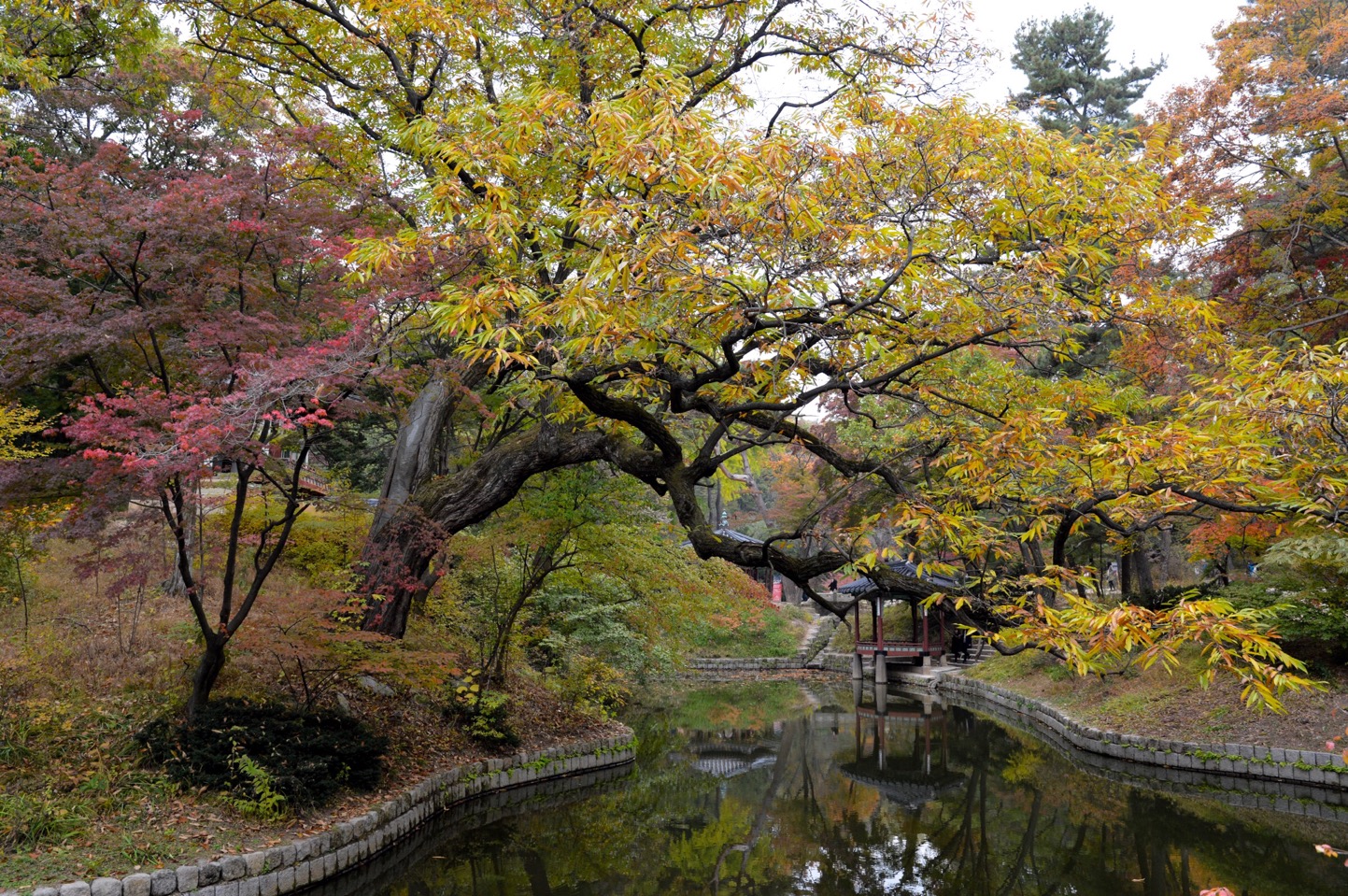 So… we actually wouldn’t recommend SeMA unless you’re contemporary art lovers. We’re not. We went because it was free and recommended by our apartment host. We’re glad we went though, because the building is pretty cool (inside and out) and it gave us a chance to walk around the surrounding area. 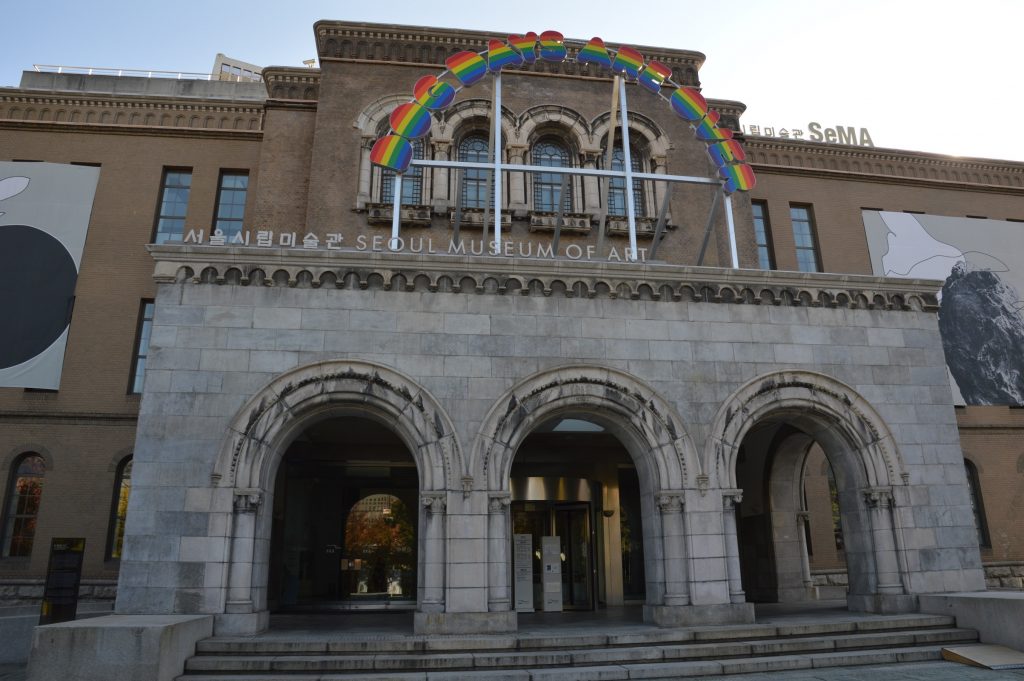 There are sculptures around the grounds of the museum, which we did enjoy. 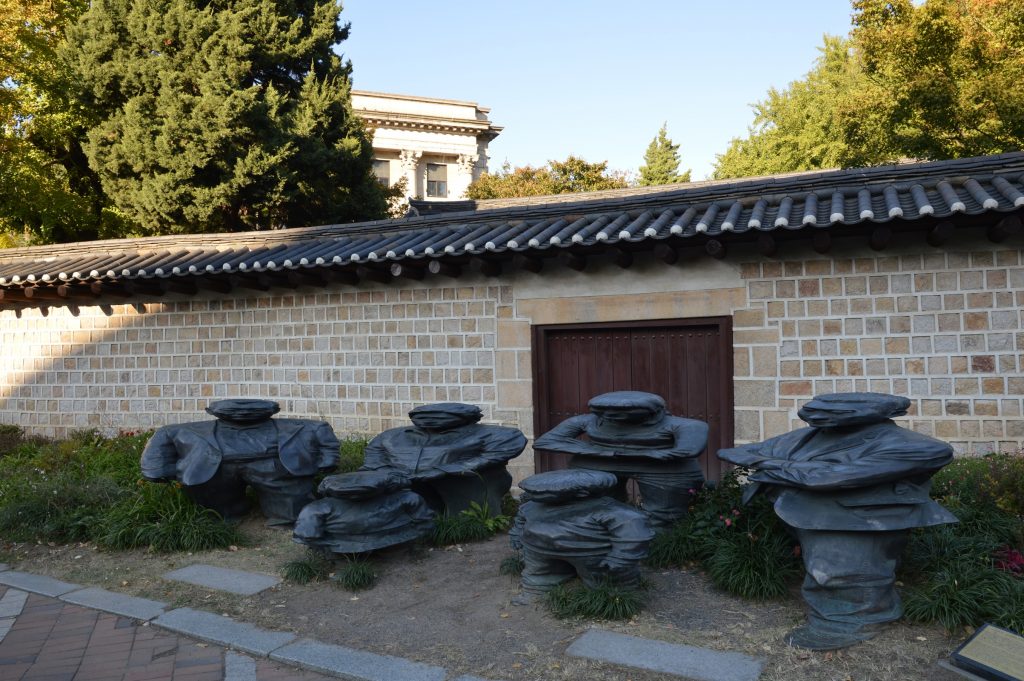 And there was what we later learned is considered one of the most romantic streets in Seoul – Deoksugung Palace Stone-wall Road. On this fine Fall day, we were surprised to see so many trees wrapped in knit scarves. It was the 2016 Tree Hug and of course we participated. 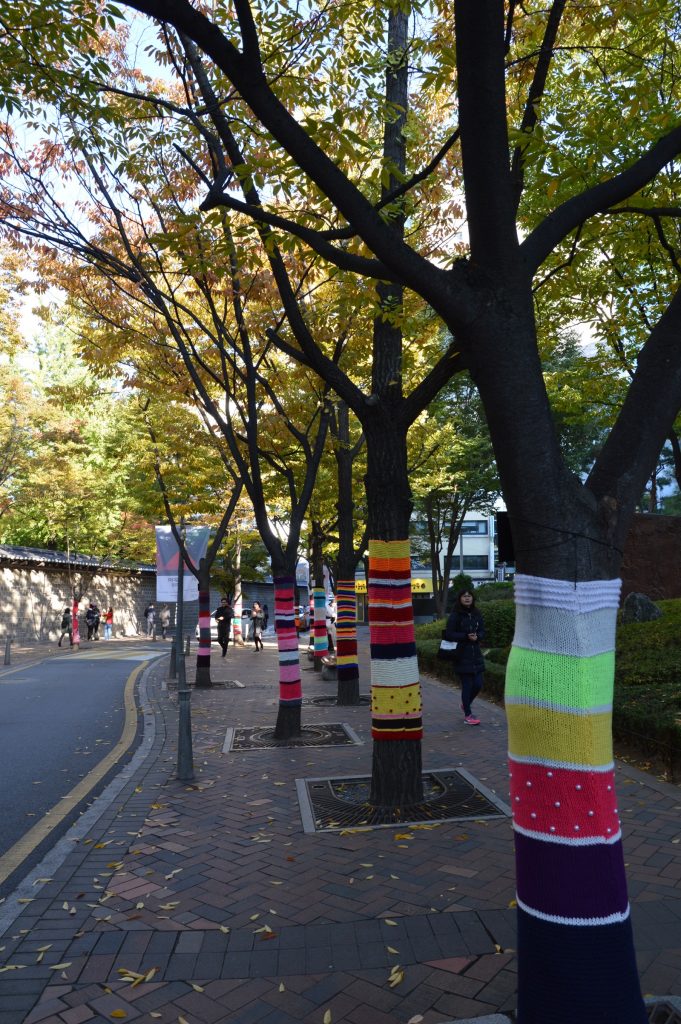 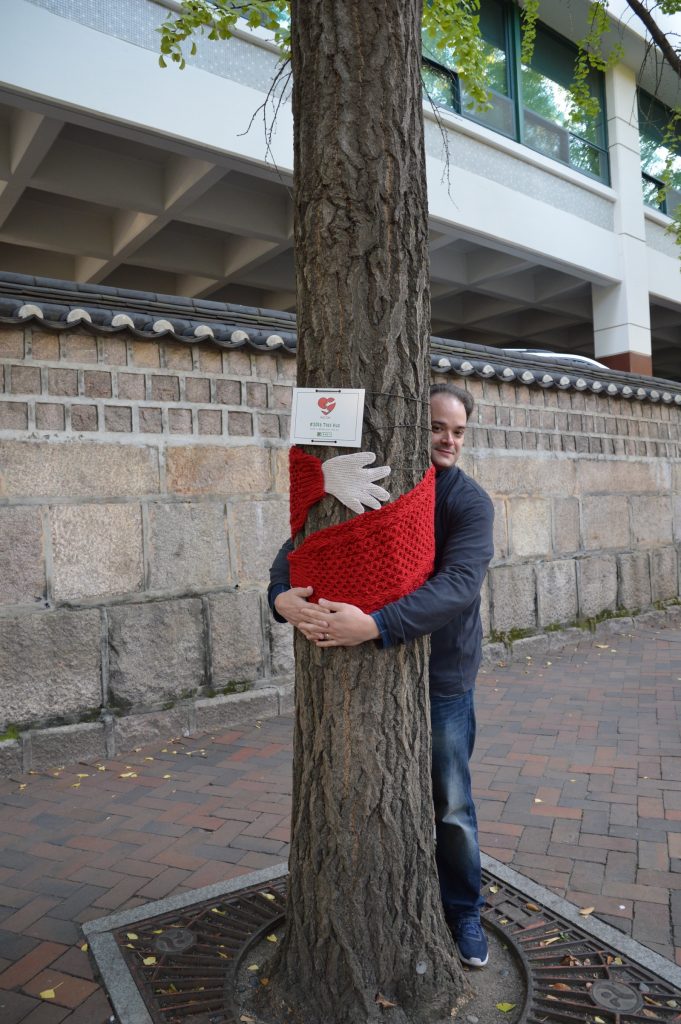 And finally we reached Deoksugung Palace itself, where we happened to walk by during the changing of the guard ceremony. 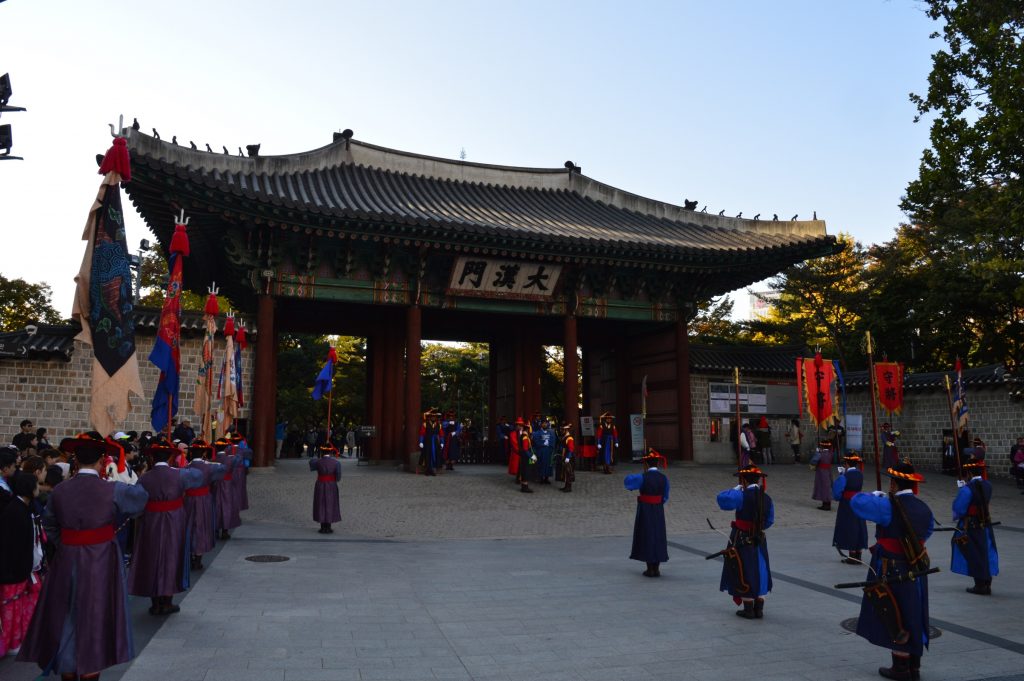 Seoul has a ton of fantastic and huge markets. We hit two of them: Namdaemun Market and Gwangjang Market. They were bustling and fun with so many things to buy (or just look at, like we did) and so much food to eat (or look at and cower in fear of, like we did). 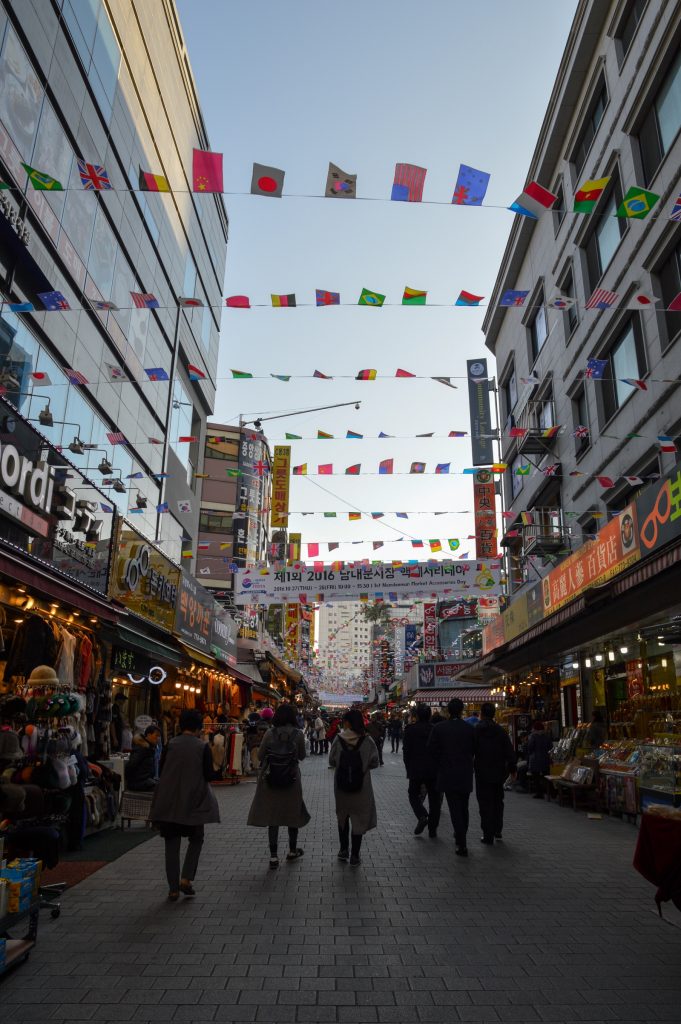 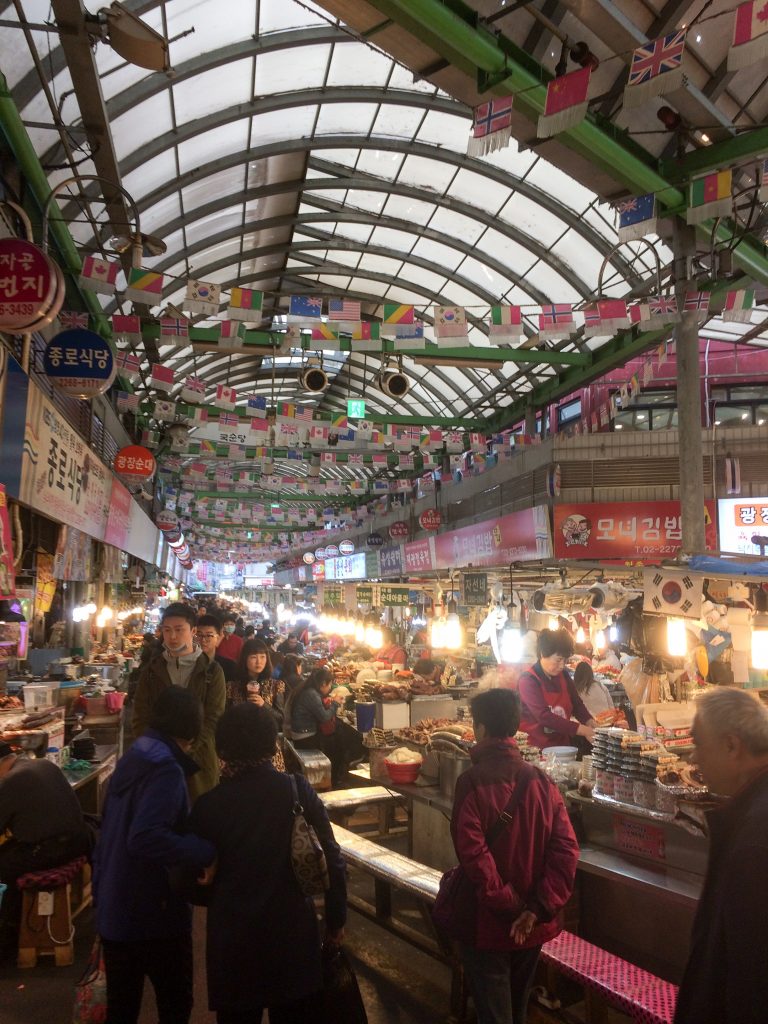 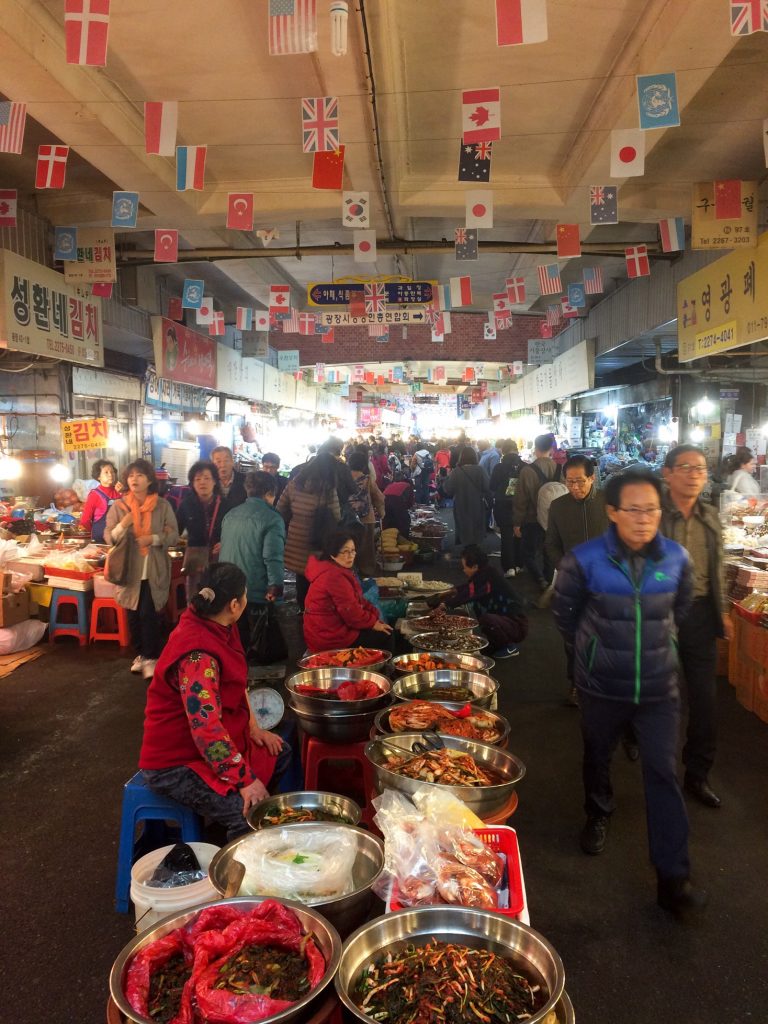 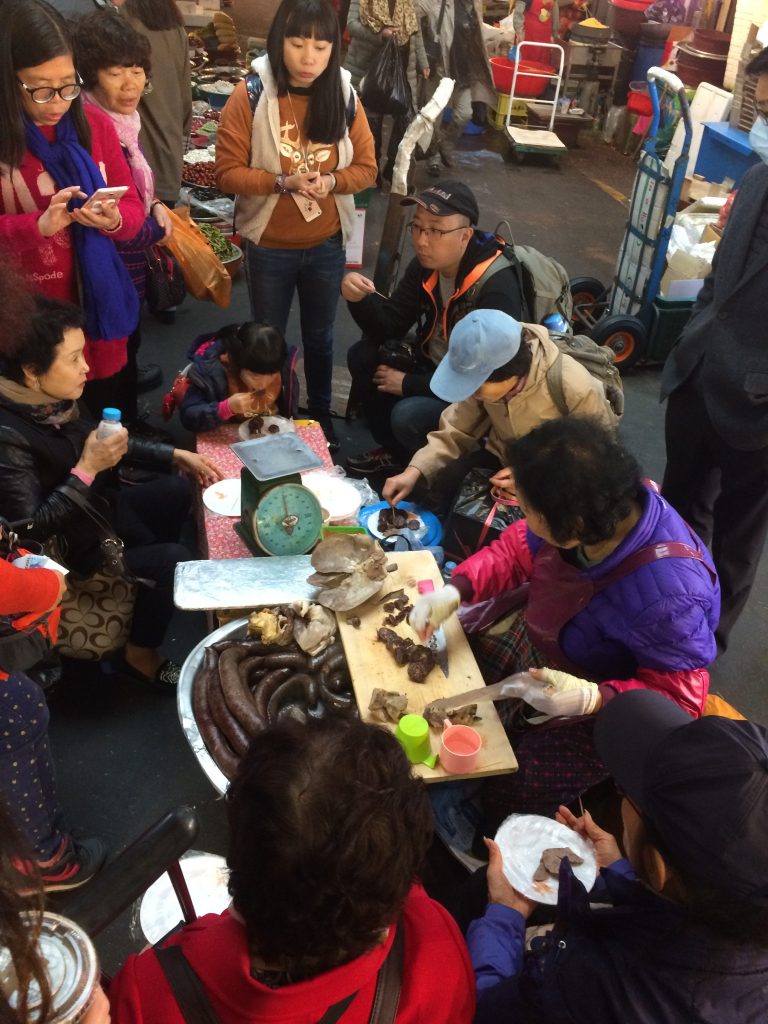 We happened to be visiting at the start of the annual Lantern Festival. If you find yourself in Seoul at this time, definitely go. Beautiful lanterns telling local stories about Seoul and South Korea are set up all along the Cheonggyecheon Stream, which runs through the center of the city. Walking along at water level seeing all the lanterns and reading the stories is lovely and romantic. 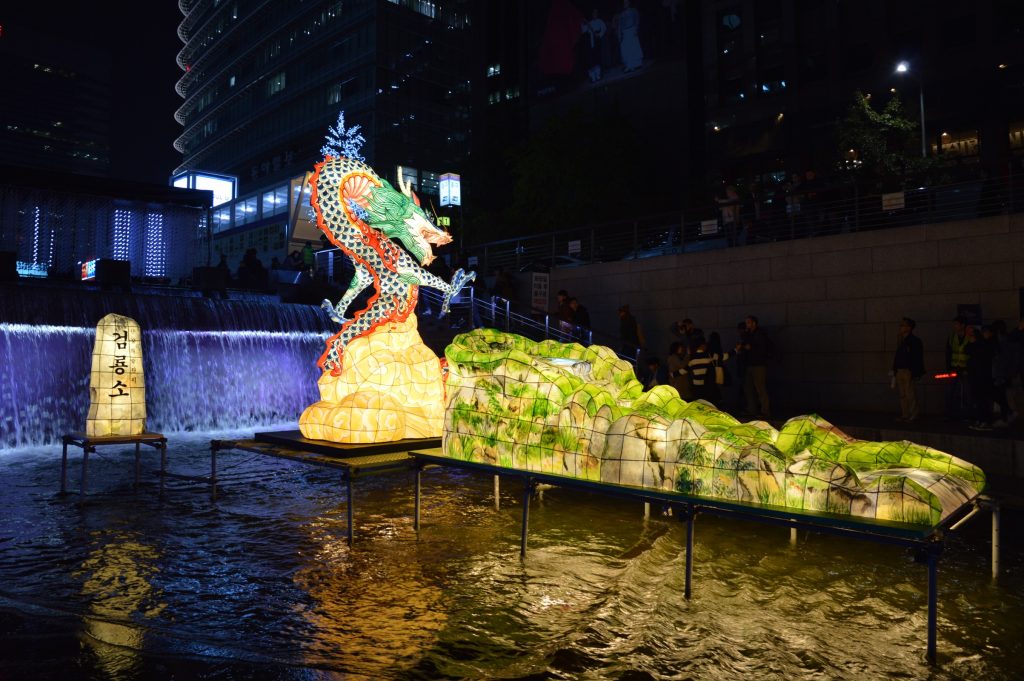 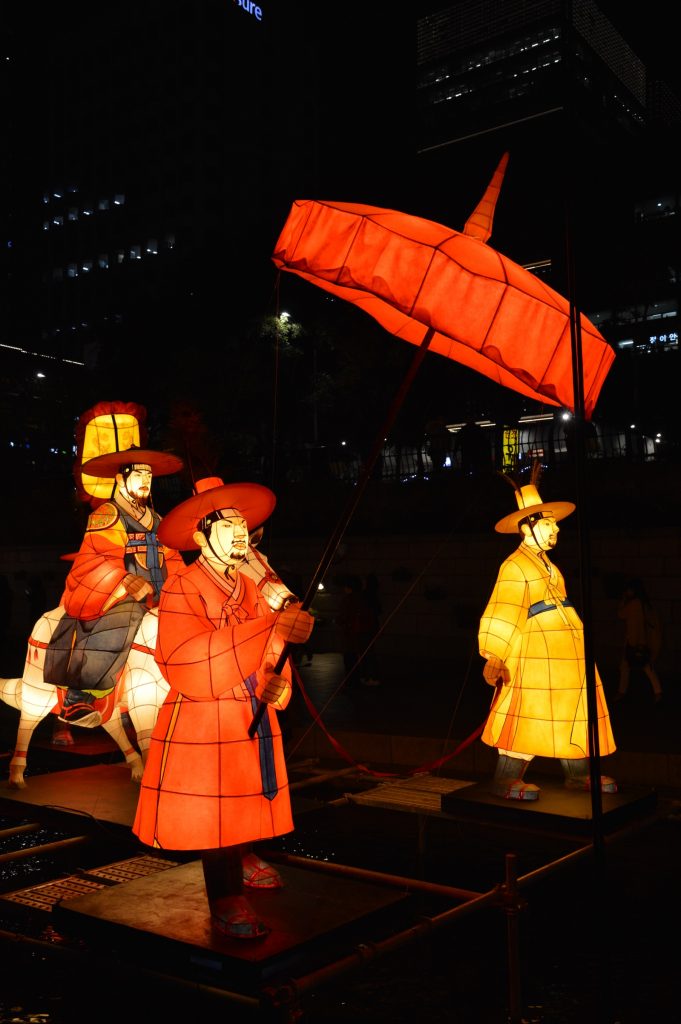 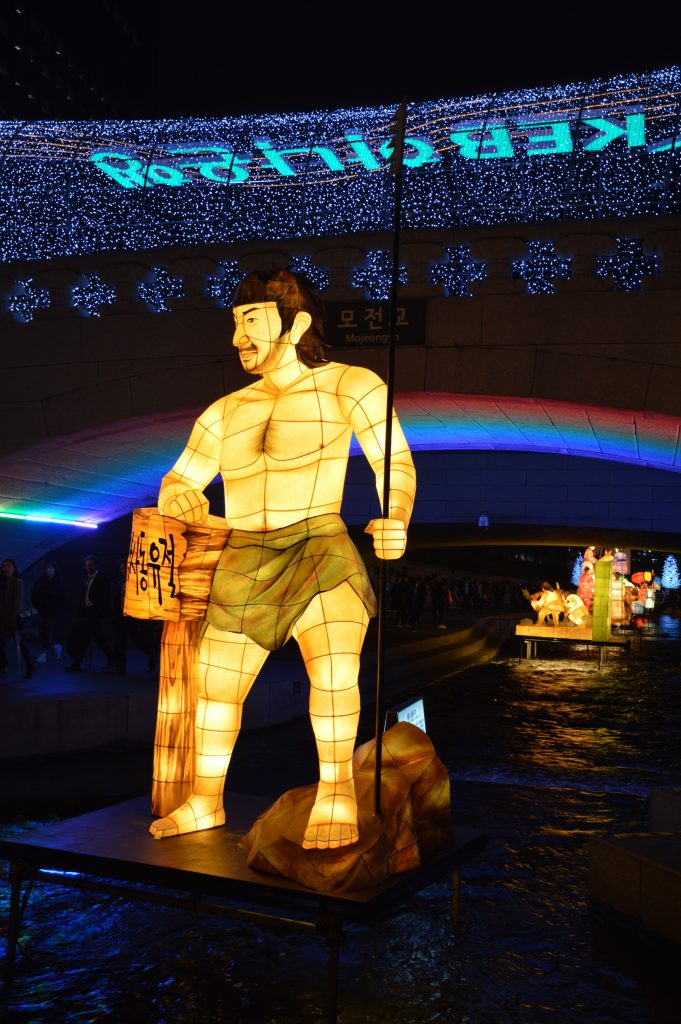 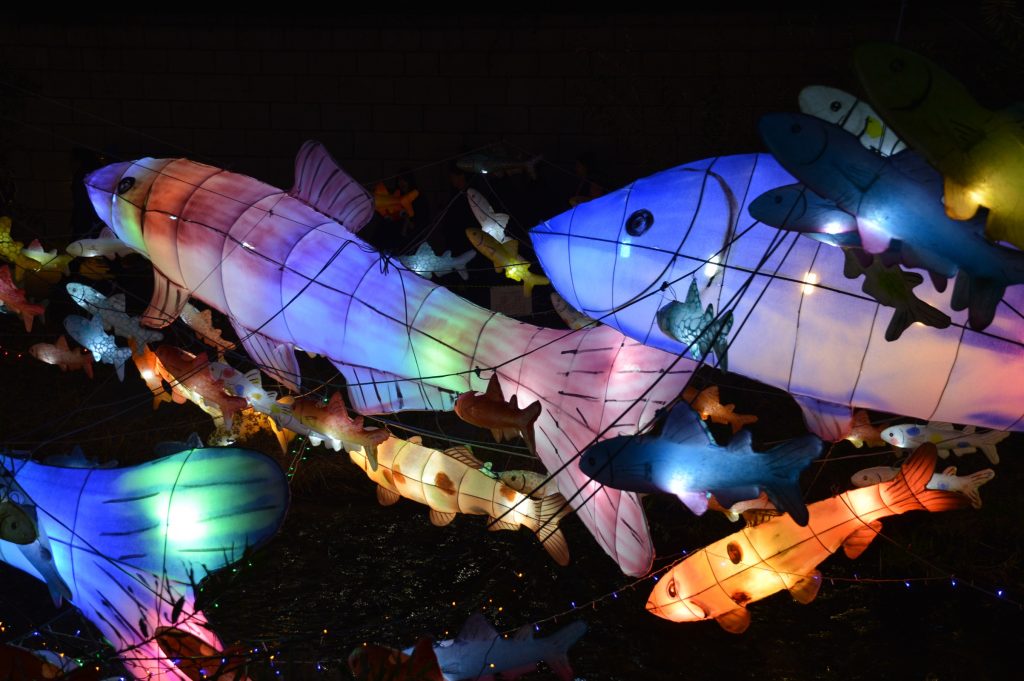 Go on a DMZ Tour

It’s touristy and pricey, but was worth it in our opinion. If you haven’t read our detailed post about the tour, read it now! 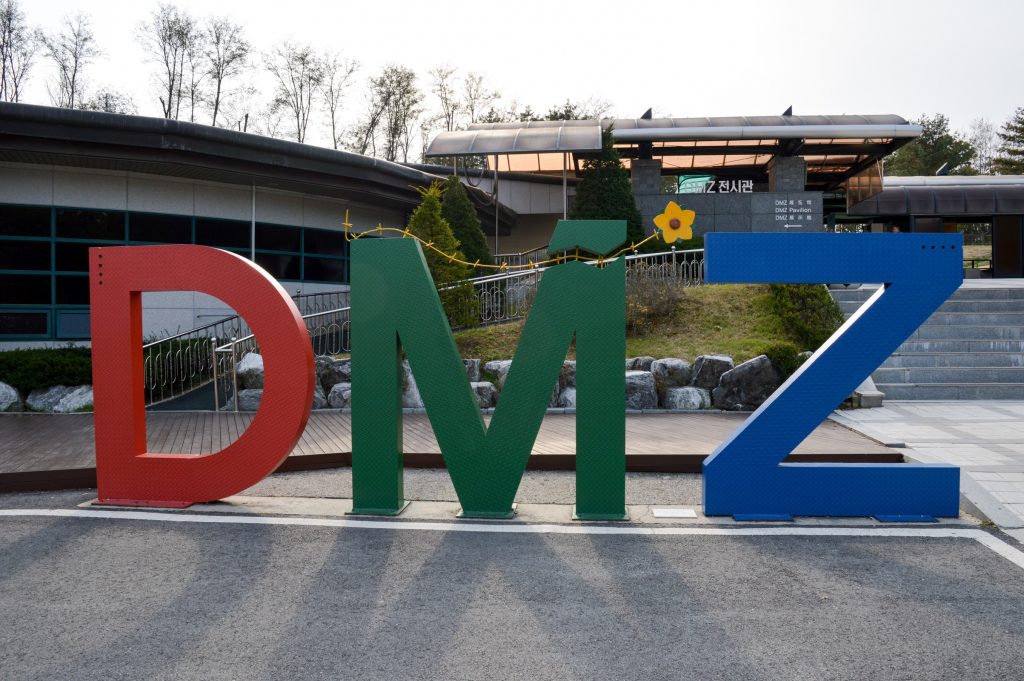 Our apartment was fortuitously located only a couple blocks from the greatest superstore – E-Mart. It’s kind’ve like Walmart, but Korean, so better. Our first night we went and stocked up on groceries and also considered purchasing warmer coats (it was a bit chilly and we’d packed for the Japan and SE Asia climate). They had a wonderful kimchee selection. Sarah’s favorite section of the store was the Pocky display. For those who aren’t familiar, Pocky is a Japanese treat – biscuity sticks dipped in different flavors (chocolate, green tea, strawberry, etc). Oh so delicious. 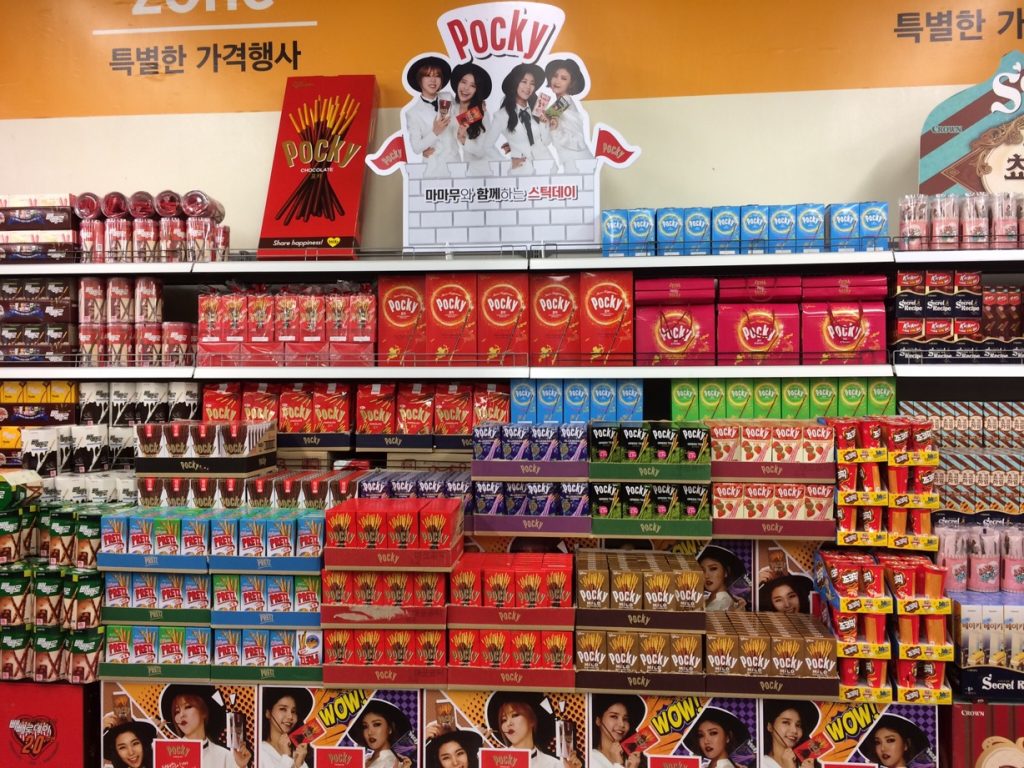 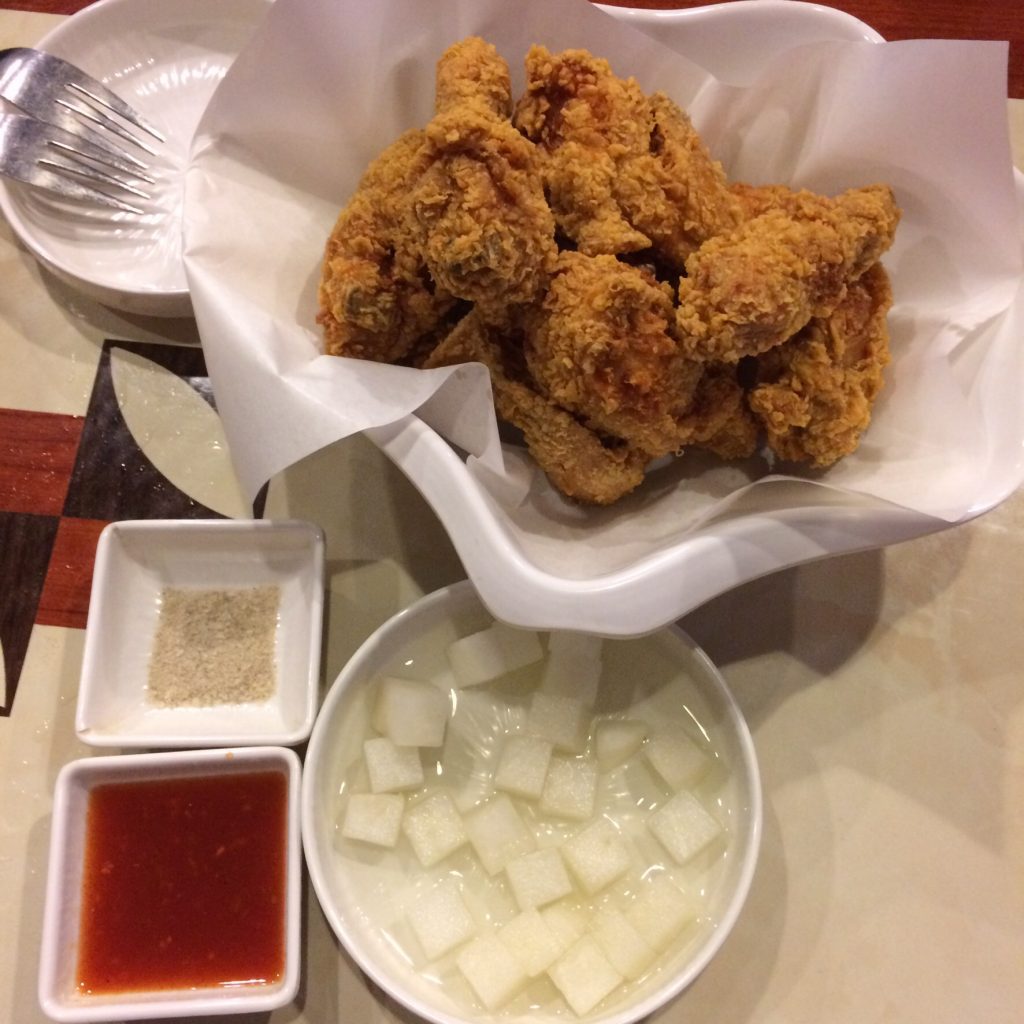 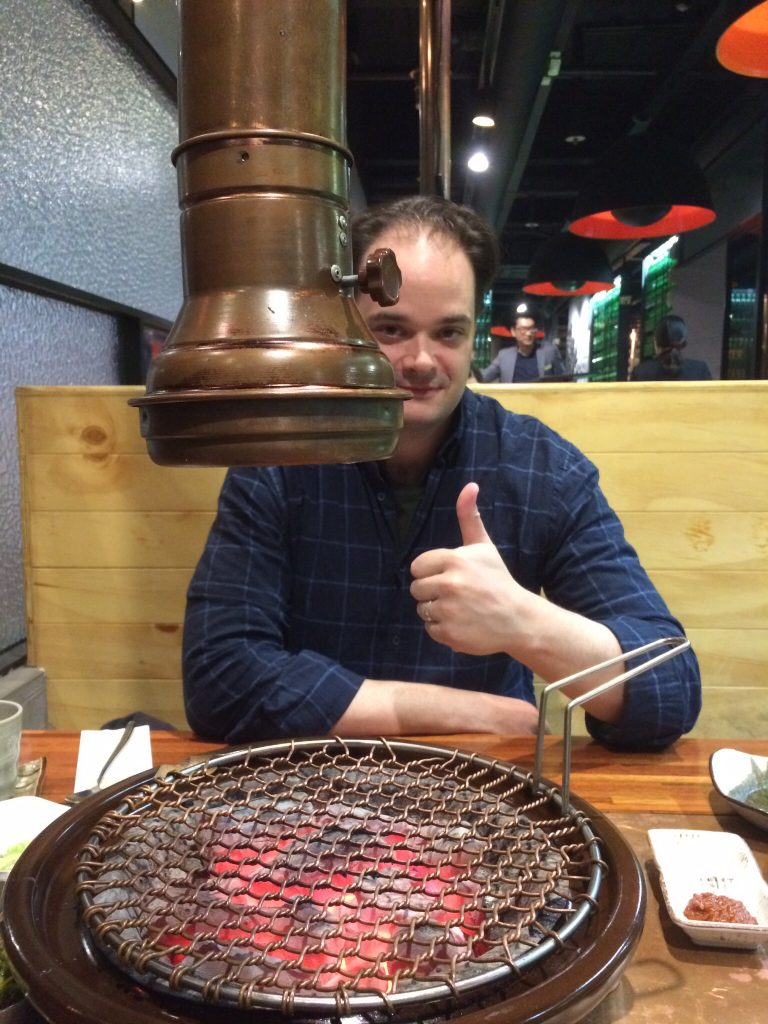 So five days in Seoul is way too few. We feel like we barely scratched the surface of the city. But that just means we’ll have to return one day!

2 thoughts on “So much Seoul”